The Sisterhood of Travel and Plants 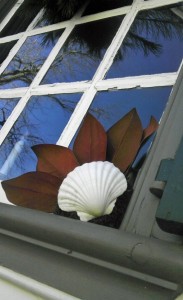 When you work at a botanical garden, there aren’t many people exactly like you around. Usually there’s only one botanical garden in a geographic area, so colleagues tend to be far flung.

If you’re lucky, you can still find like-minded organizations nearby for information-sharing and support. Lewis Ginter Botanical Garden is fortunate to have one of these “sister” organizations in Maymont, an estate and park a few miles away. Last week, staff from the Garden and Maymont traveled to another like-minded organization just an hour down the road — Colonial Williamsburg — for a special tour of their holiday decorations. 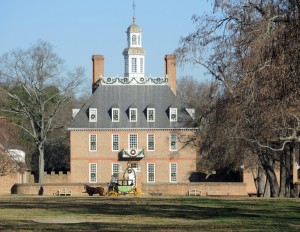 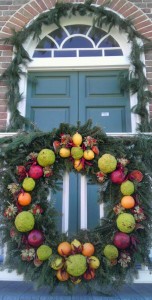 Heads nodded in sympathy as Dippre related how she was so busy with other horticulture activities that she missed picking the Osage oranges (Maclura pomifera) at just the right moment for optimal drying. Members of the group also took note as Dippre mentioned the use of dried red peppers in decorations to discourage squirrels from snacking.

As Dippre led the group down historic Duke of Gloucester Street, which runs east to west, she pointed out decorations as well as observations good gardeners would know and appreciate. “We tend to use more dried materials on decorations that are south-facing,” she explained, noting the sun and heat dries greens out more quickly than on the shadier and cooler north side of the street.

A blue ribbon winner in the Amateur division

While many of the 120 buildings decorated in the historic area are done by Dippre and her staff of 12, some of the houses are private residences and are decorated by the occupants. This results in a contest and the ribbons you see fluttering near the wreaths identify the winners in two categories: Amateur (those who do it themselves) and Professional (those who hire designers to do the work.) This year, Maymont’s own Director of Horticulture Peggy Singleman was a judge.

After the tour, the group headed to King’s Arms Tavern for lunch and decorations in front of the Wigmaker’s Shop caught my eye. “What are these?” I asked a nearby costumed interpreter, pointing to white cylinders placed in the wreath. “Wig curlers,” she said, and went on to explain they were made of clay and that the wreath also included horsehair, which was used in wigs at the time. It was the kind of “teachable moment” Colonial Williamsburg does so well and inspires us all. 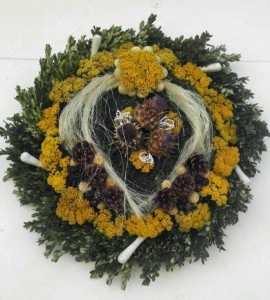 Wreath in front of the Wigmaker’s Shop with 18th century style wig curlers and horsehair.