I entered into the Ginter Urban Gardeners program with a deep affection for the term urban and wanting to learn more about sustainable gardening practices.  Ultimately, I was seeking to make a difference in my community. I have certainly gained much knowledge in the ways of growing plants with respect for the earth and its inhabitants. 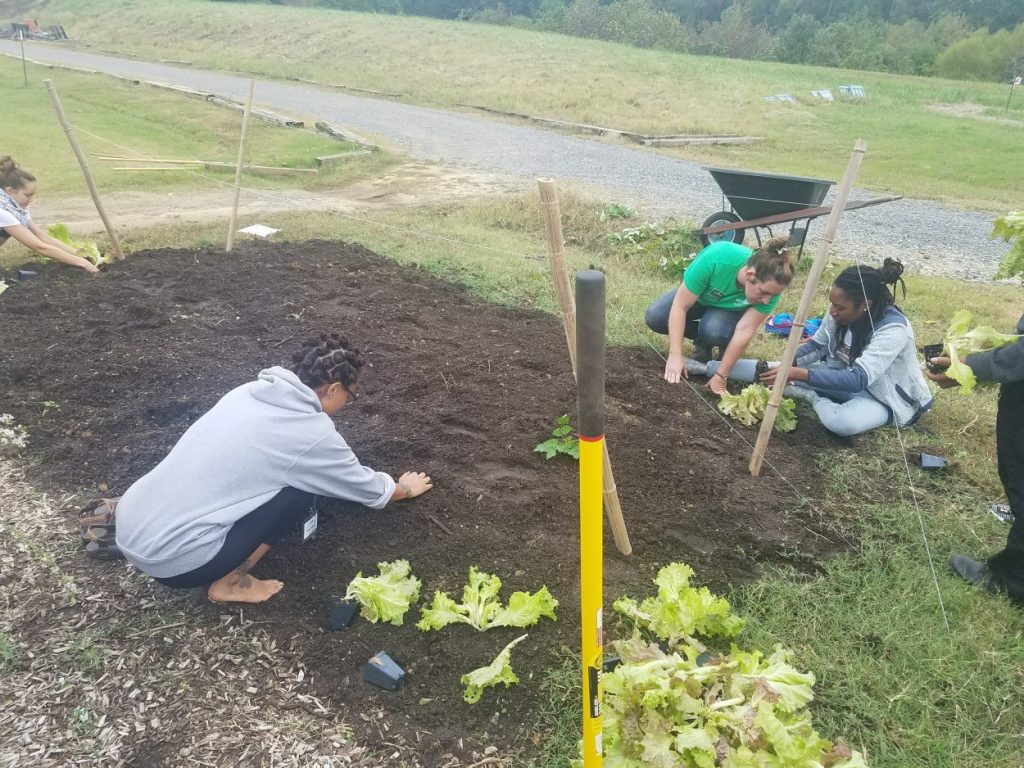 Liza Newell, Kiran Bhagat and Kai Banks assist in planting lettuce with the help of horticulturist Chelsea Mahaffey. The stakes are part of a newly-installed raspberry trellis in the Community Kitchen Garden at Lewis Ginter.

What I didn’t know is that I would also gain a powerful and eye-opening perspective on Richmond’s racial past. On the very first evening of class, the “Unpacking the Census” 2010 Census review based on research by University of Richmond’s John Moeser knocked me off my feet, changing my perspective entirely.  I went home exclaiming to my family that we are beyond rich and I hope that I won’t forget this feeling.  It was critically important for our cohort to understand on a deeper level how poverty and race patterns in Richmond have affected its citizens and even future trends. 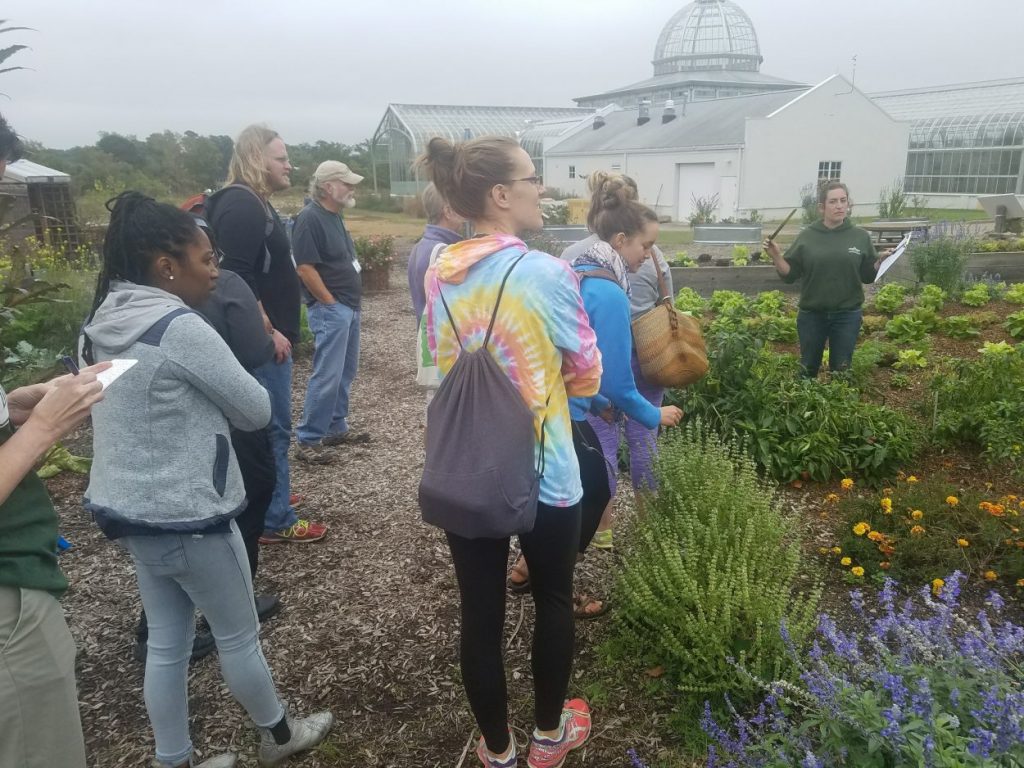 Even though I was laid off from a corporate job in January 2017, I have resources available to me that I had previously taken for granted. Richmond’s segregated history lives on in ways I never realized. Even though I grew up in Richmond’s East End, I hadn’t thought much about how segregated we still are in this city and other cities across our land and why. I know that the citizens in Richmond’s communities can teach me things that I could never learn in a corporate world. 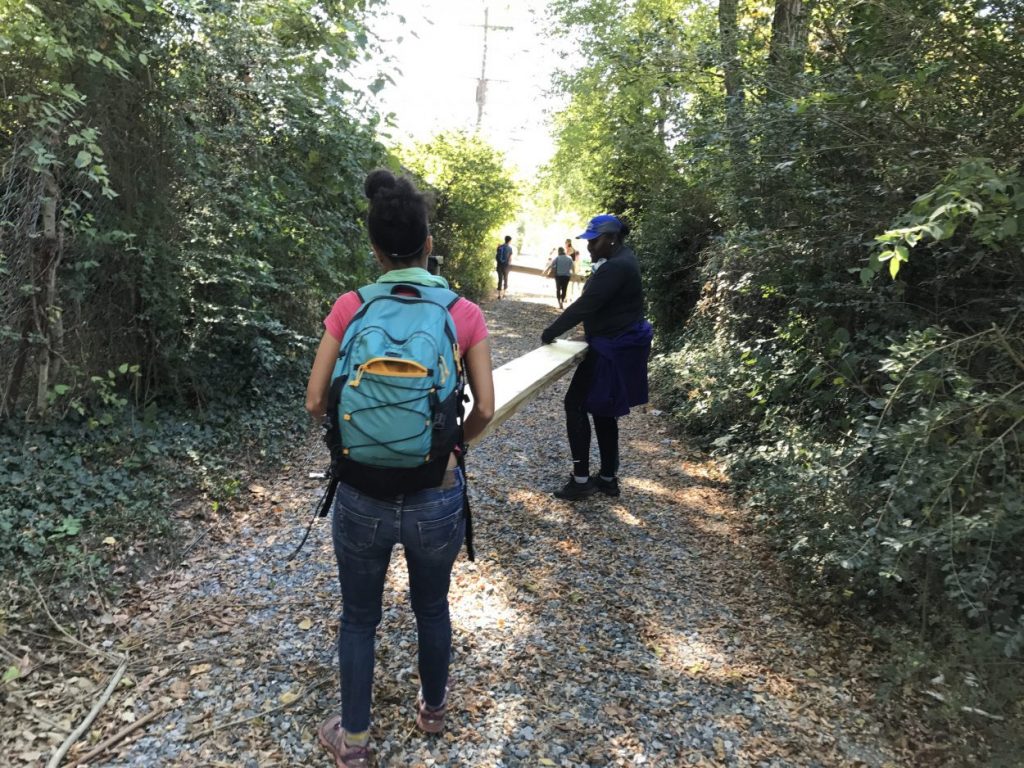 Moving supplies down the alley from the Neighborhood Resource Center to a nearby site for starting raised beds.

Some of the most inspiring people I met in my early life were those that I met at Central Gardens Elementary School (now the Math Science Innovation Center) when I was bused there in the 6th grade during Richmond’s school busing integration. This is when I started having positive relationships with people who were a different race. It makes me wonder: what other encouraging and inspiring people are in this city that I haven’t met yet? And even more importantly who is helping who?  We tend to think that we are going to help someone else and then we realize that they are helping us by becoming our friend, and through this friendship teaching us about a world greater than the world we knew before. 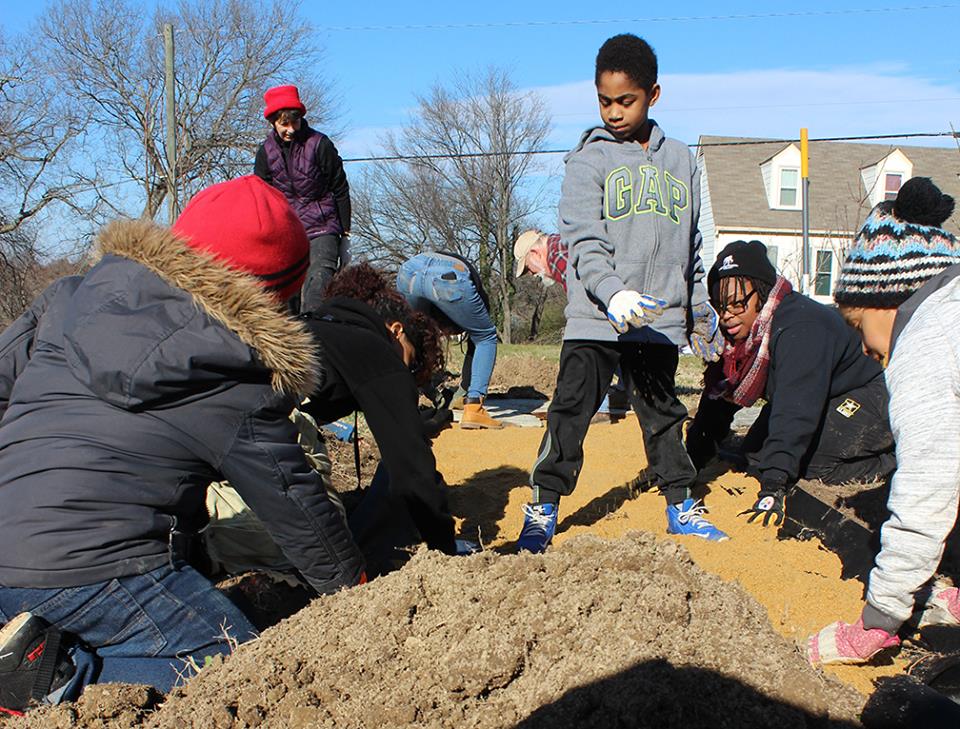 Ginter Urban Gardeners spreading sand to form garden paths during one of their projects.

The excitement of growing a garden and reaching out to the community is the perfect complement for me. This program gave me the chance to spend time with 13 people who share a passion for making change happen in the Richmond community. We made so many connections through the weekly sessions as we engaged with each other in the Bon Secours Center for Healthy Living (Sarah Garland Jones Center) and other local urban garden spaces around town. I am thankful for and feel deeply connected to these 13 individuals as my brothers and sisters of the garden world, and Lewis Ginter’s Community Engagement Coordinator Duron Chavis. 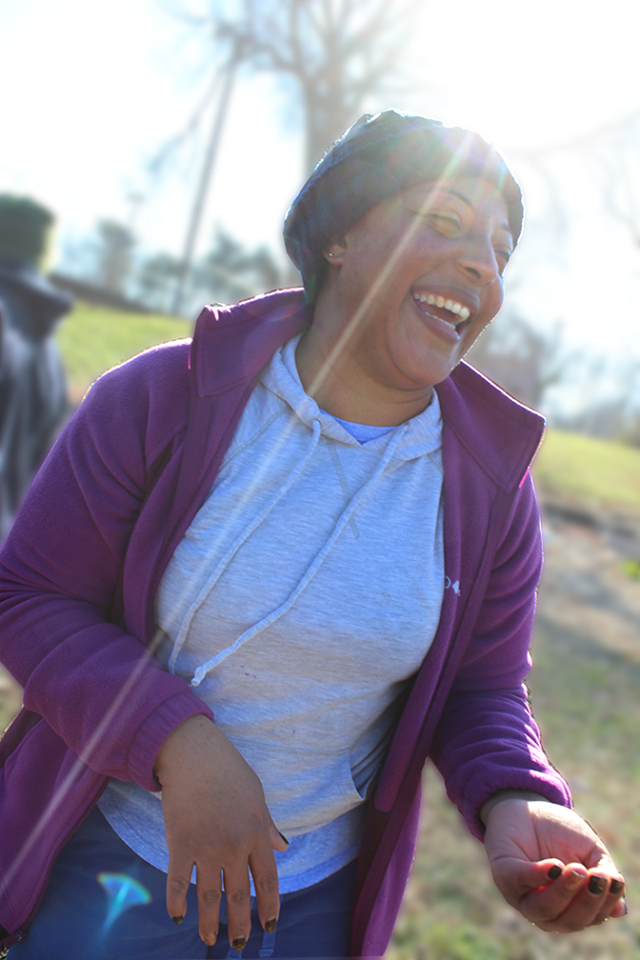 One element of this program that was key to its depth and success was when facilitators from Initiatives of Change engaged the cohort in trust-building dialog sessions. Our group explored many questions and considered obstacles to meaningful engagement in a community.

We asked ourselves: How do we engage with the community where a garden is being created? What has happened there in the past? What do the people in the community want to plant there? What activities are they interested in? Are there elderly people in the community that might need help getting out to the garden? (Not to mention that they might be able to teach us a thing or two about gardening.) Are there children that might like to learn about planting vegetables and flowers? And are we ready to listen to the answers, whatever they may be?

It is not enough to go into a community and start a garden and expect it to flourish. There has to be a connection to the community in some way —  a member of the local community,  a business or church has to be invested in its extended life there and help serve as a hub for connection.

As our group celebrated the completion of this class and received our certificates at the Storefront for Community Design, we reiterated that we know our work is just beginning. I am so excited to start growing and connecting and meeting and learning. It is because of the the Ginter Urban Gardeners program that I am on this life-changing path. 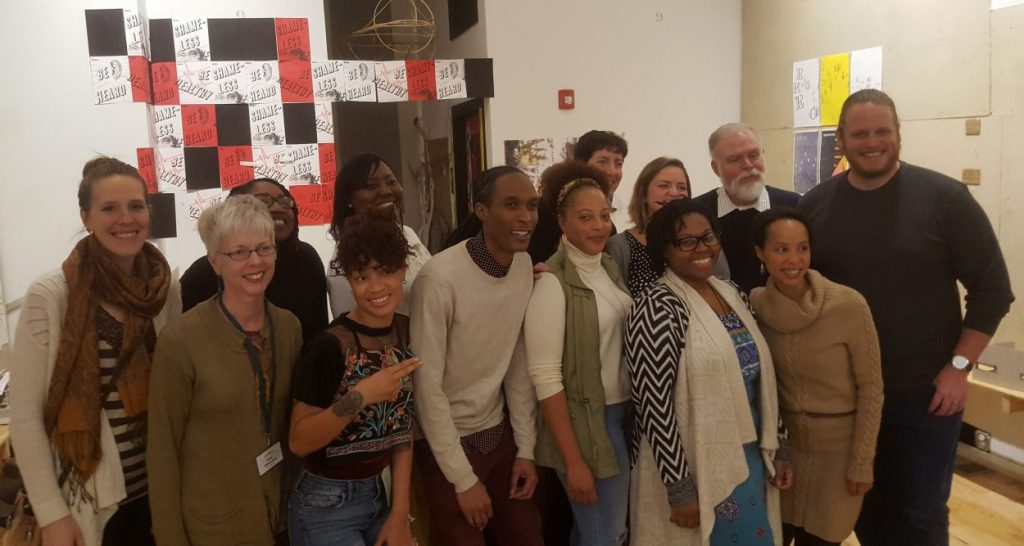 The second cohort of Ginter Urban Gardeners after graduation. The author, Dawn Williamson, is in the first row, to the left with the lanyard name tag.

Dawn grew up in the East End of Richmond and attended Henrico High School. She worked at Lawyers Title for 29 years before the company filed bankruptcy in 2008. She is a member of the Environmental Film Festival Committee and has a special fondness for film selection. A recent renaissance period has developed for Dawn after being laid off two more times from corporate and law firm jobs. She completed the Ginter Urban Gardeners Program and plans to mix this passion with her love for flowers and all things sustainable by starting a cut flower farm.

Learn how you can get involved

If you wish to make anything grow, you must understand it.