A Vision for the Future 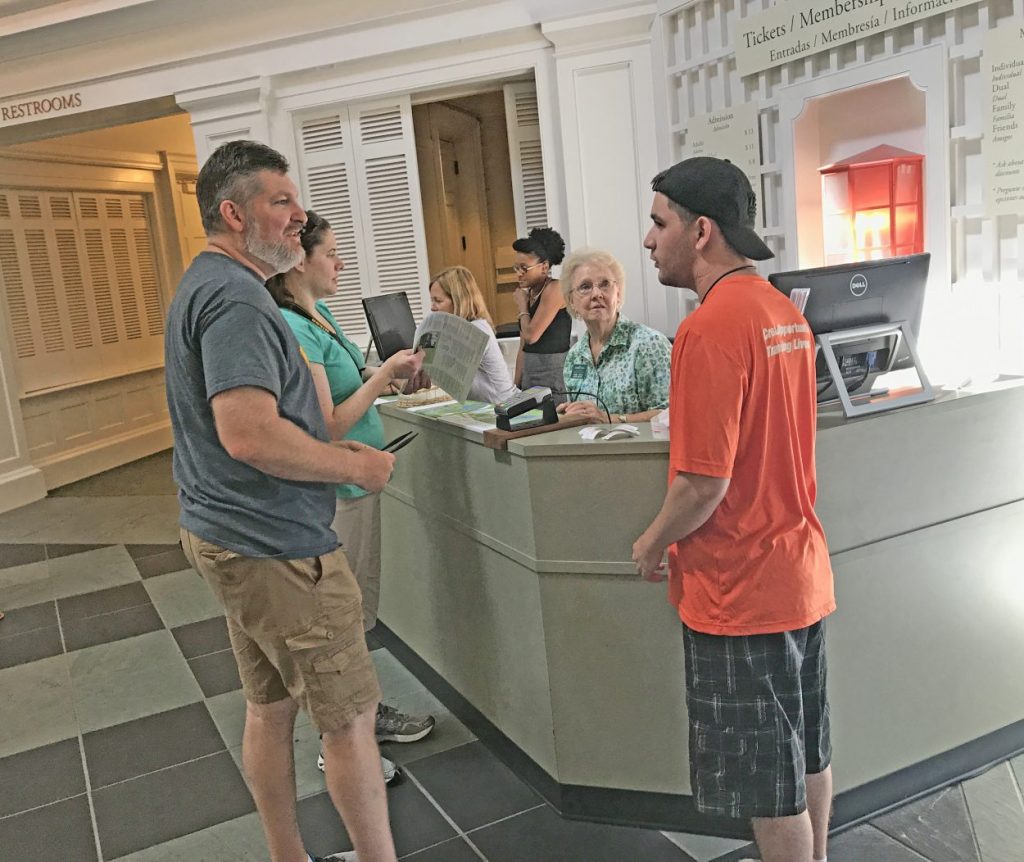 David Palma-Carias (right) at one of his favorite work assignments – welcoming visitors to the Garden.

David Palma-Carias is like many teenagers. At 19, he loves to listen to music, has a wicked sense of humor, and he’s using his time out of school during the summer to build a foundation for his future. David is thinking about career plans and dreaming big (he wants to be a radio personality).  When I met him, the first thing I noticed was his T-shirt. It read: Guapo en peligro de extinción. With my minimal Spanish vocabulary I picked out the words handsome and danger. But I had to look more closely to get the full translation — “handsome in danger of extinction.” Not only humor, but confidence, too. Well okay! 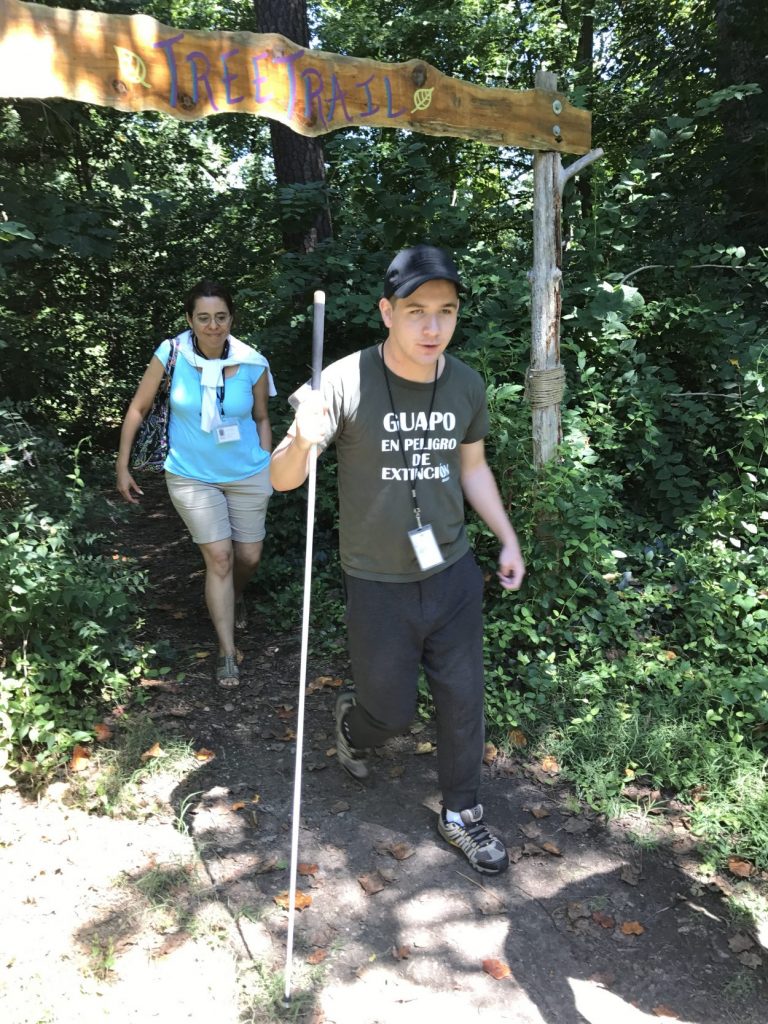 David wearing that famous t-shirt, “handsome and in danger of extinction” as he walks our of the Tree Trail, an area of the Garden with many different types of terrain to negotiate including rocks, roots and mud.

Of course,  when I first met him, I also noticed that David is vision impaired (he still has about 10 percent of his vision). He uses a cane to navigate, and on this particular day he was helping with our Amazing Adaptations Green Adventures Summer Camp. David’s responsibility was handing out pencils so the group of 15  campers, ranging from 6- to 8-year-olds, could write a reflection in their nature journal about the differences between soil and compost.  The other thing that I immediately noticed about David was that he had a companion, an interpreter. David is not fluent in English. (I should mention here that most of my conversations with David happened with the help of  Commonwealth Catholic Charities translator Roxana Wolburg.) 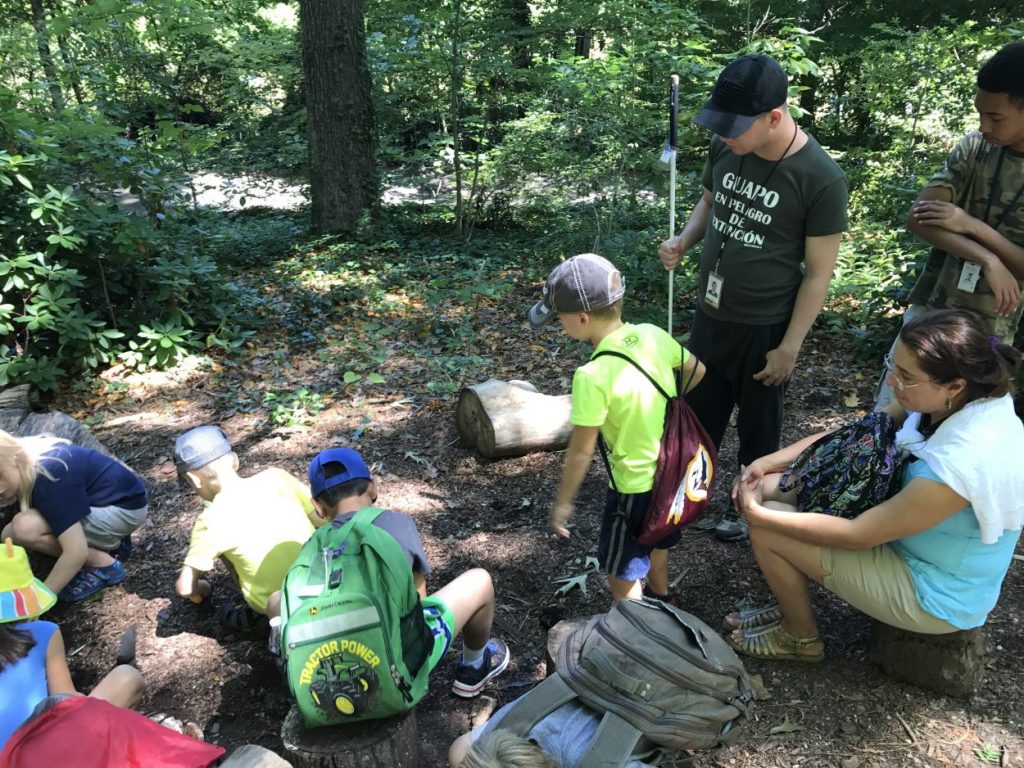 David watching the campers dig in the soil.

For five weeks each summer, the Virginia Department for the Blind and Vision Impaired becomes home to about 35 high school students from all over Virginia. They live in a dorm in the residential facility off Brook Road and practice life skills such as how to do their own cooking, laundry, and cleaning,  and learning what it’s like to have a job. DBVI partners with area businesses and non-profits to provide work experiences for these teenagers, dropping them off each morning for work and picking them up at noon, when they go back to the center for additional skills development.  In addition to helping out at our summer camp, David has been learning horticulture skills.

“I have been picking up weeds and helping the children to pick up tomatoes and put them in the basket. We tell them the benefit of butterflies, and I also learned about plants and I have been cutting plants and picking up leaves, ” he says.  But he says he also just appreciates getting to know lots of people. He’s a people-person for sure.  He says his favorite part of the experience has been helping the children pick the harvest of tomatoes. 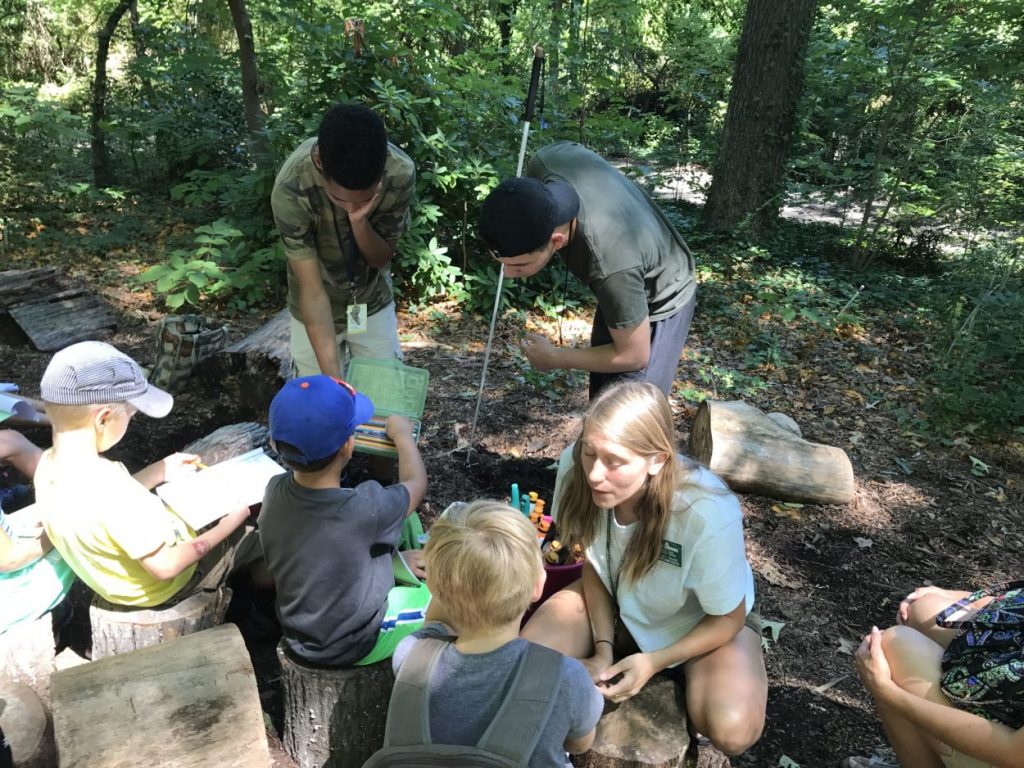 David taking a closer look at how he can help the campers. While Children’s Garden educator Kelsey Deans talks to a camper.

Lewis Ginter Botanical Garden has partnered with DBVI since the inception of their workforce training internship program.  Each year, the Garden learns something new about how we can better serve and train young people with vision impairment or blindness.  David was here for a total of three weeks, and over that time, we also adjusted his work assignments as we saw where he really flourished.  As I mentioned before, David loves people. So, towards the end of his time here he was spending most days in the Robins Visitor Center, greeting visitors, giving them their admission stickers and welcoming them to the Garden.  David explains, “I like the job [at Lewis Ginter] because it helps me build my social skills with people. I learn to work by myself and with others.” 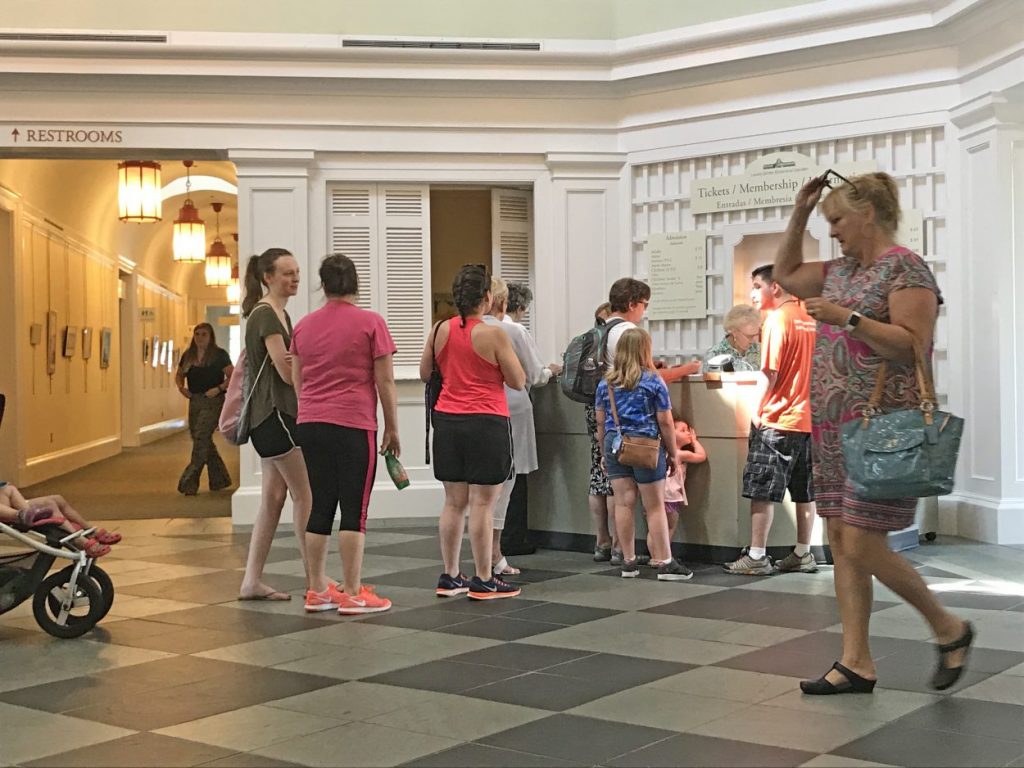 David (in the orange shirt) working with admissions staff to welcome everyone and making sure they have stickers before they enter the garden.

Partnering with the Virginia Department for the Blind and Vision Impaired

Greg Chittum, the DBVI Coordinator of Community Engagement, explains why the job training partnership with Lewis Ginter and other area organizations and businesses is so important.

“My first job was mowing grass for Striker park. Did that experience teach me how to be a Community Engagement Coordinator? No. But it did teach me how to arrive on time at work, how to listen to my work supervisor, and how to get along with my coworkers. These are all skills that help me do my job now,” Chittum says.  “The goal is to teach these young people social skills, work ethic, navigating work using visual and non-visual cues, and being comfortable in a wide variety of circumstances. Lewis Ginter Botanical Garden has been a partner in this training program since DBVI starting placing students in community work assignments in 2015.” 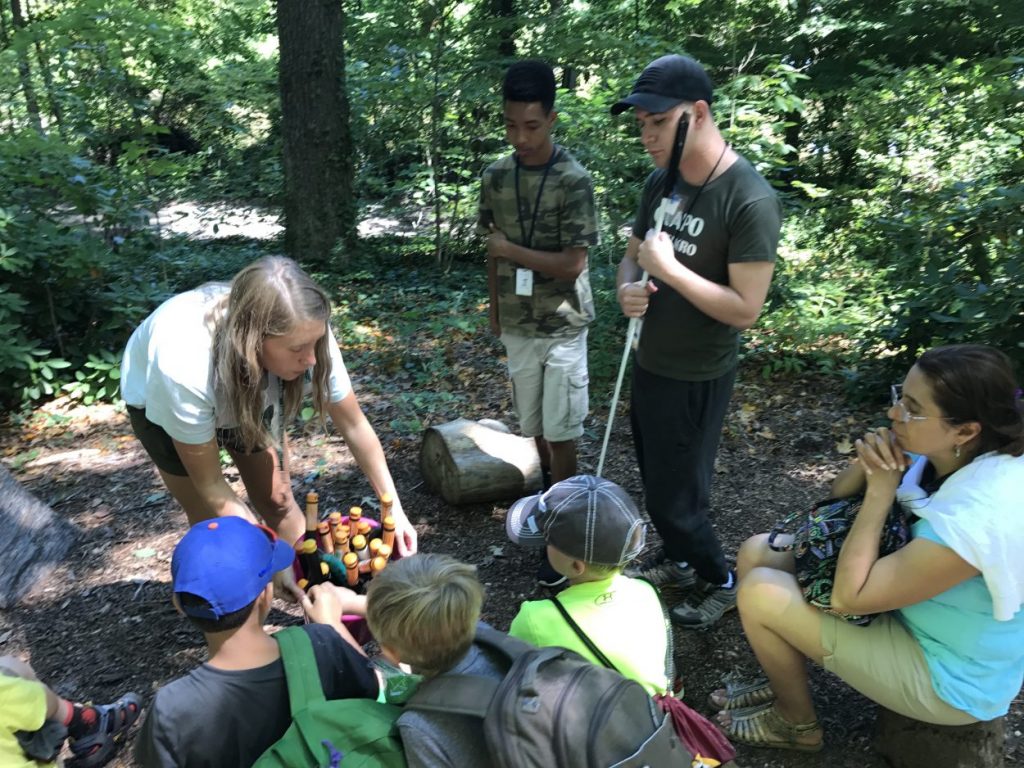 Chittum explains that even if David  doesn’t plan to go into horticulture for a career he’s learning an array of skills he can apply to any job — or life. Mobility is one such skill. He’s using a cane navigating a very large campus with both paved and unpaved pathways. As we walked through the woods to an outdoor classroom, David had to navigate rocks, roots, picnic tables, branches overhead and sloped terrain.

“The cool part about this program is that he’s getting a work experience, like his sighted peers. ”  It’s easy to see that Chittum sees a brilliant future for David. 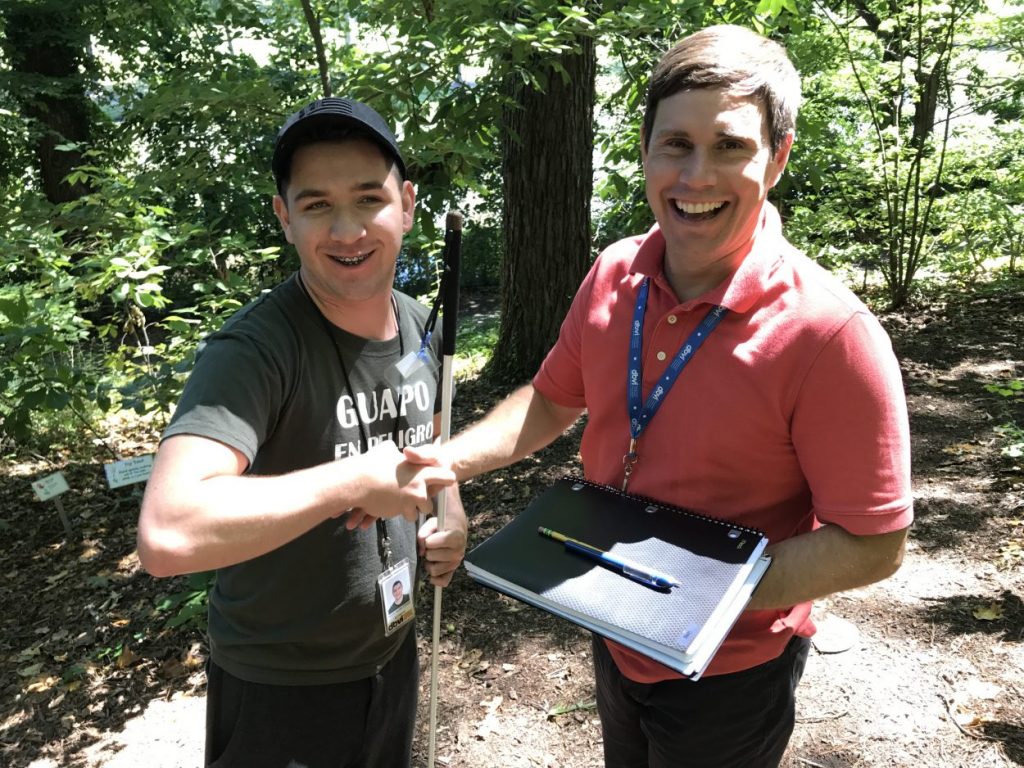 “He is very smart, very personable, he is funny — hilarious. He has so much potential. I’m proud to have the opportunity to be affected by a kid like David.”

David, originally from Guatemala,  has only been in the United States for two years.  He understands a lot of English for someone who’s only been here for two years.  I watch as he carefully listens to my English, trying to translate for himself what I am saying, before translator Roxana Wolburg chimes in.  My Spanish and his English are about the same level, and I’m trying hard to understand him in Spanish before the English translation as well.  We do a funny dance, deep in conversation, we’d like to just speak directly to each other without the pauses and scattered pacing that comes with any translator. I switch to Spanish for a moment, “¿Por qué?”  And he answer me in English,   “Because….” 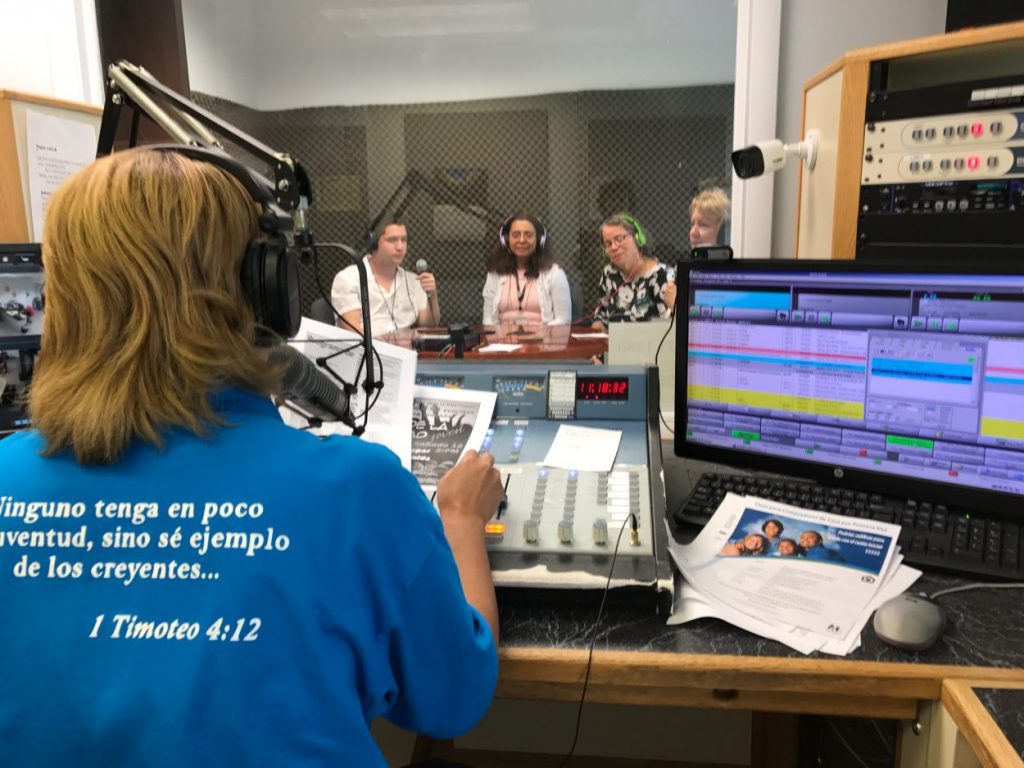 The view from behind the mic at Radio Poder. Show host the Rev. Arlene Guzman facing the radio board with David, Roxana Wolburg, Jonah Holland and Karen Bunn.

He explains “Yes, I do have a good understanding [of English] but there are a few words I don’t know and sometimes I feel unsure because I don’t know the meaning.” He’s also ambitious. David explains, “I will speak two languages very soon and I am also learning Portuguese.”

Having David here at Lewis Ginter for the past two weeks has been a really great experience for him, but it’s also been a great experience for our staff.  Personally, having grown up with a father with vision impairment myself and having seen first-hand how difficult it is, I’ve been inspired seeing how eager David is for new and challenging experiences. Vision impairment  doesn’t deter David. Despite the barriers that he has, his attitude can only be described as resilient and extremely positive.  David’s smile is never brighter than when he mentions his dream — to become a radio announcer.  That’s why when I learned what he wanted to do, our staff worked to see if we could make some magic happen.  For several years, we’ve been partnering with Radio Poder WBTK (AM 1380), a Richmond-based Spanish language station to help let the Latino community know about our events.  We heard back almost immediately from Glen Motto, Operations Manager at Radio Poder that he would be happy to have David sit in on the “Enfoque a la Comunidad” (Community Focus) program live on the air, and that he might even be able to say hi to everyone.

When we arrived at Radio Poder, show host the Rev. Arlene Guzman welcomed all of us (Olga Skorackyj from VA Rehabilitation Center for the Blind and Vision Impaired, translator Roxana Wolburg and myself) and asked a few questions about what we wanted to talk about on the radio.  We were actually going to be on the show! The other guest host was Karen Bunn from  CrossOver Healthcare Ministry talking about the free health services that they can provide. Karen  generously shared the spotlight with David as he talked about his time at the DVBI training center, how much he likes Richmond, and his work at Lewis Ginter. After the interview David turned to station director Motto and said through the translator, “We wanted you to know this has been a great blessing. This has been a great opportunity for my life. You made my dream come true.”

It was a magic moment, and I was thrilled that the Garden could play a small part in making it happen.  As for David, today he graduates from the DVBI program and goes back to Northern Virginia. In September, he’ll start his junior year in a program for students with vision impairment at Robinson Secondary School.  But I have a feeling his memories of this summer will be strong in his mind as he moves onto the next chapter in his life. 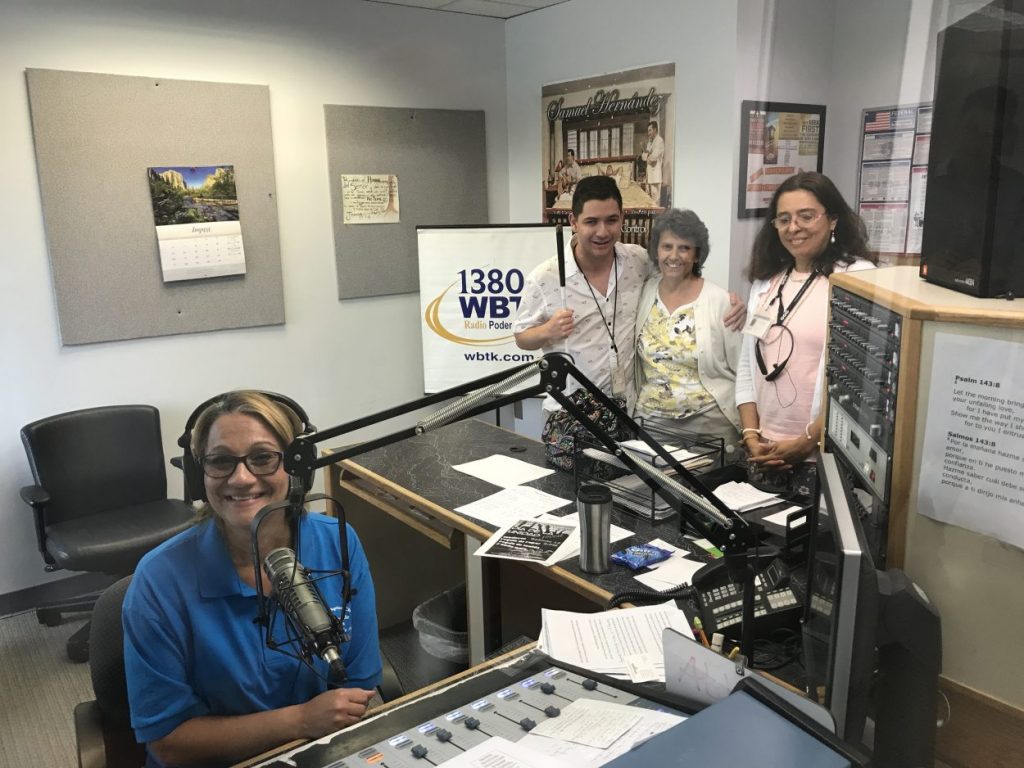 The Rev. Arlene Guzman, this week’s show host of “Enfoque a la Comunidad” at mic with David Palma-Carias, Olga Skorackyj from the VA Rehabilitation Center for the Blind and Vision Impaired, and Commonwealth Catholic Charities translator Roxana Wolburg. 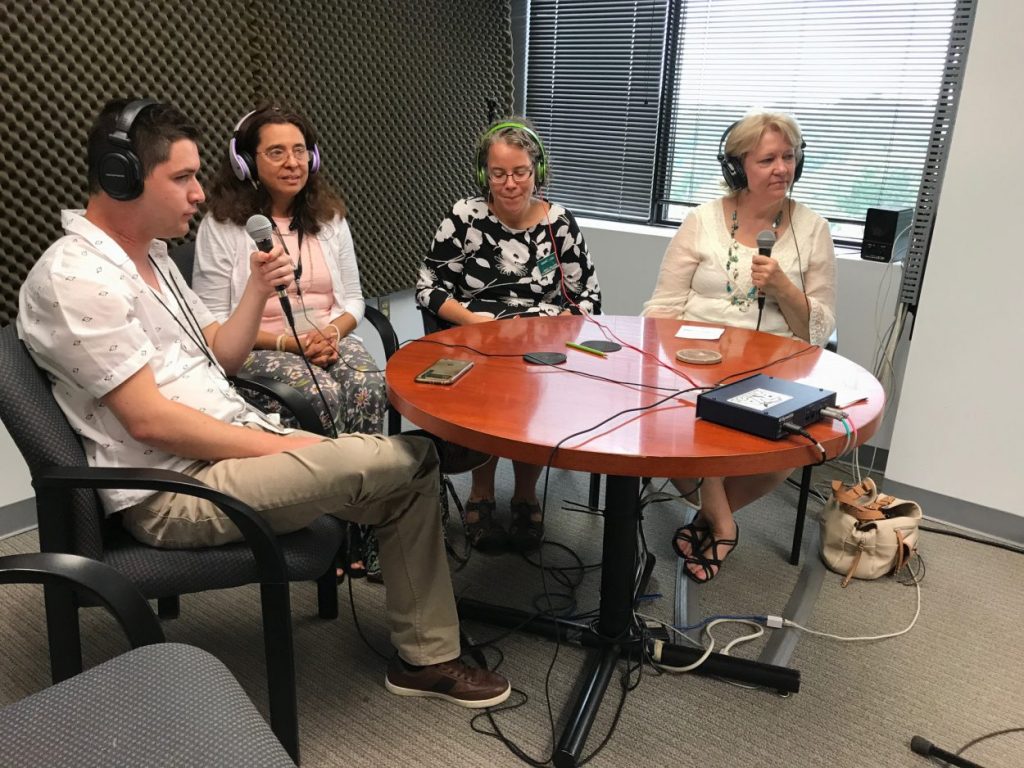 Free Garden Admission for all!