They began working last spring. They brought with them energy, creativity and ingenuity. They never asked for pay. And many will keep working through January! “They” are Lewis Ginter Botanical Garden’s highly valued volunteers who help bring Dominion Energy GardenFest of Lights to life, year after year.

Meet a few today. Then, watch for additional spotlights in the next “Garden Times” newsletter, Garden Members can look for it in their mailboxes in mid-November. After reading about why, how and what they do, we hope you will appreciate these loyal volunteers as much as we do. 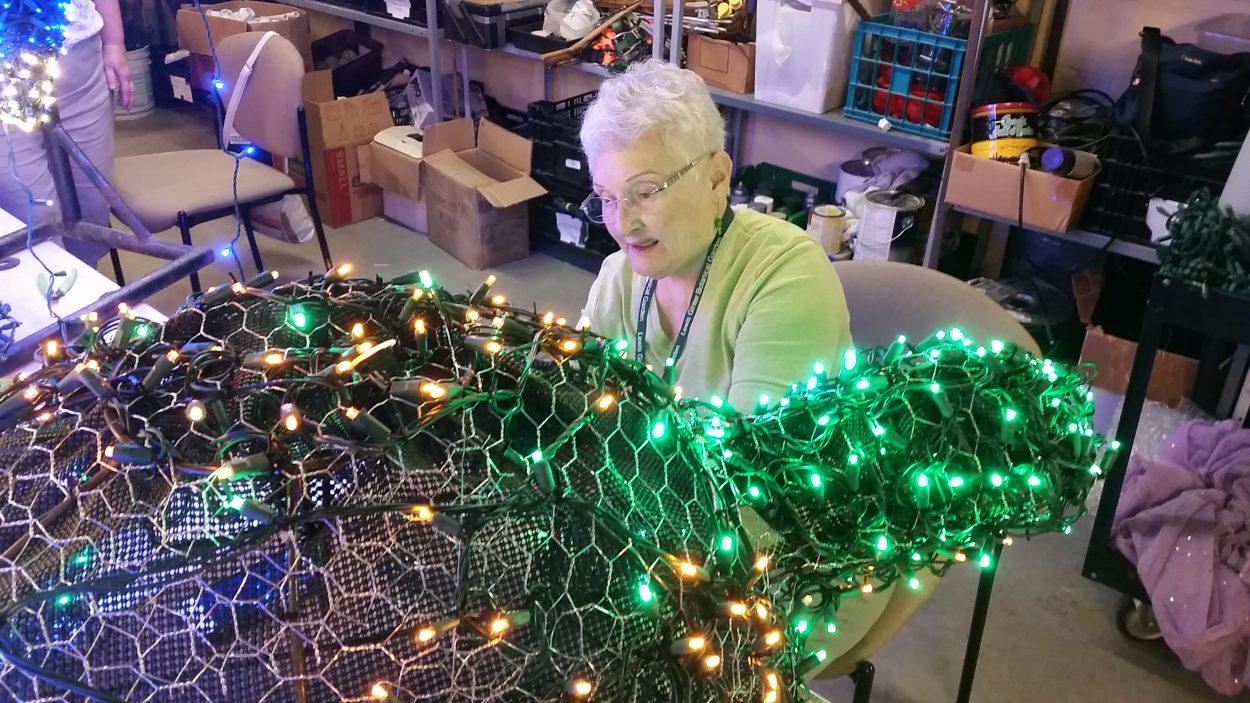 “It’s so much fun when you see animals come alive” through lights, says Droujinsky, who has volunteered for more than three years. “How often do you get to put together a blue elephant and a green pig?” she asks with a smile. “I don’t have the skills or vision, but I can put lights on.” Kirby adds, “When I talk to people, they are most surprised I come in May to work on GardenFest. They don’t realize the extent of the creative process and work effort that’s involved.” For example, Debbie Isley, a 3-year volunteer, spent hours morphing a chicken-wire form into a lighted fairy-tale princess. She says it was a breeze, though, compared to her first assignments: a ginormous elephant and polar bear, both mammoth-sized tasks! Meanwhile, Hartenberg has helped with horticulture, plant sales and GardenFest for 18 years. “Working on the light forms takes a lot of patience, but not a lot of skill. And the people are nice and so good to the volunteers.” Baysden, who also works in various places, says: “Thursdays, I dig in the garden, and on Tuesdays, I play in the basement.” While volunteering, she met Deegan, who moved to Richmond two years ago from Florida. Now in addition to crafting side by side, they celebrate holidays together, too.  Fun is had; friendships are formed. No wonder so many enjoy volunteering for GardenFest! 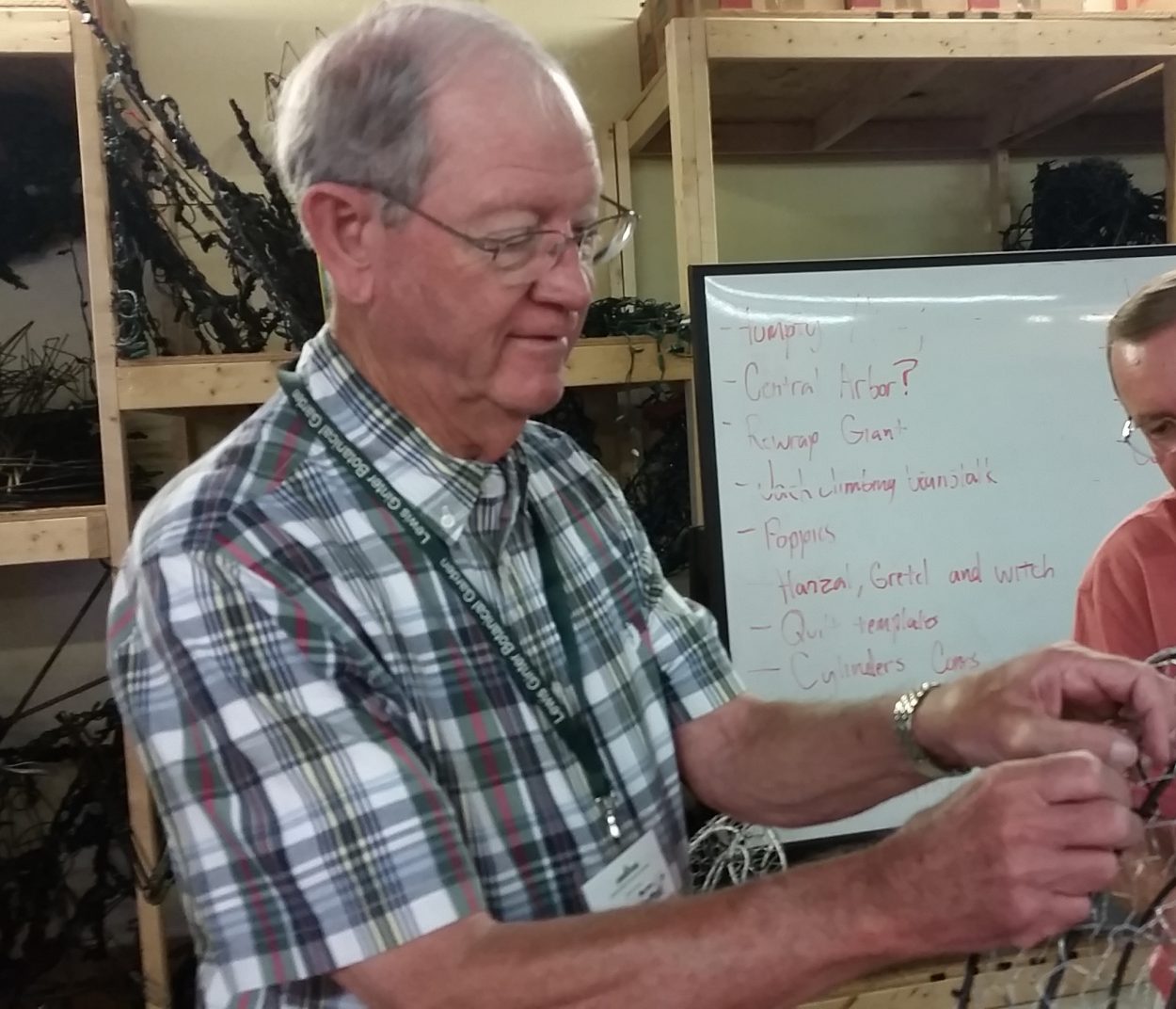 Carr Harrell helps repair light forms and inspect lights. “I also work in the library and run the trains,” he says. Glenda, his wife mischievously reveals, “Carr is color blind, so he works on frames, not lights.”  He responds, without missing a beat, “At least this gets me off my duff and makes me do something.” If you happen to see Carr during GardenFest, be sure to share your thanks!

“When I first started [more than 3 years ago], the basement was a mess. I’d spend half a day looking for white lights,” volunteer Ron Braszo says. Realizing the need for organization and claiming no artistic talent, Braszo decided to organize the basement workroom and storage areas. He separated lights by color and developed a color-coded labeling system, relying on work skills as the former storeroom manager for Eaton Corporation. “After GardenFest, it’s like a zoo – lights all bundled and needing to be tested,” he says. “I make sure that next year, when you go to get a light, you know where it is and that it’s going to work.” Thanks to Ron Braszo, our lights are officially organized (well as much as they can be, considering they total more than a half-million!). 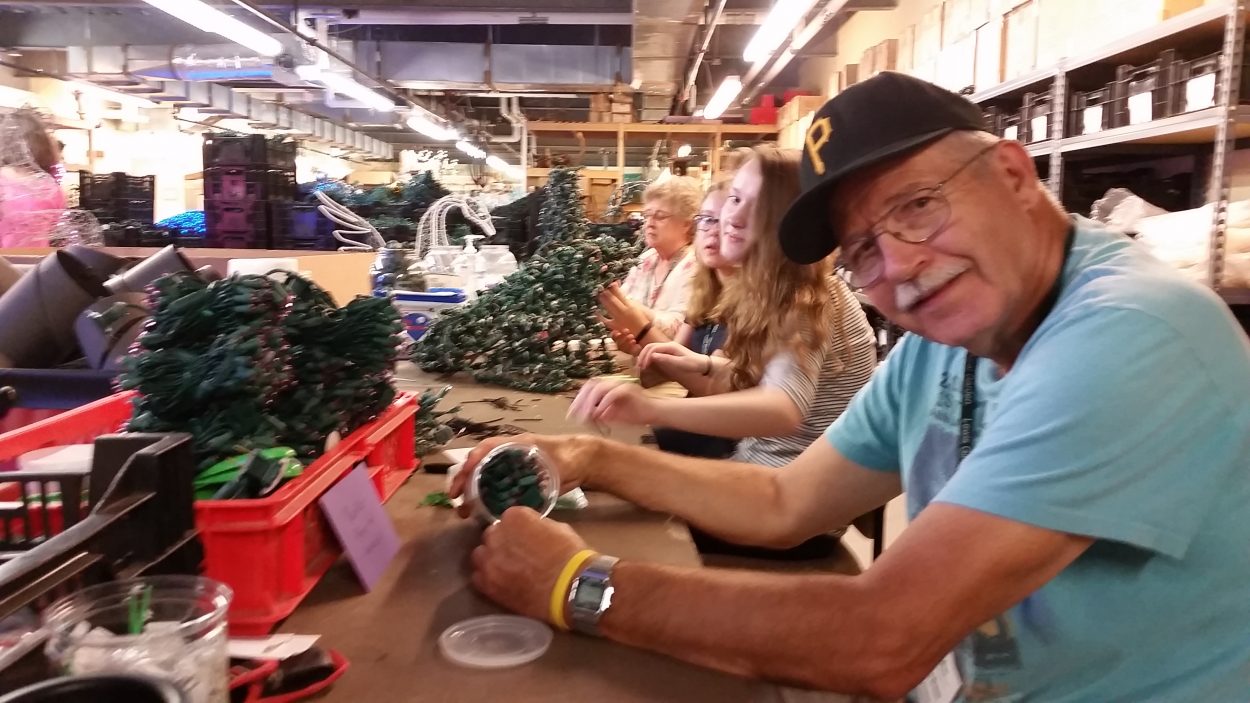