“Ideally, we shouldn’t feed wildlife at all,” said Carol Heiser, habitat education coordinator with the Virginia Department of Game and Inland Fisheries (DGIF). Nature takes care of her own during winter, and we should let her.

The black bear teaches its young where to find food, including easy-to-access bird feeders and trashcans left outdoors. Photo by Meghan Marchetti

Birds, squirrels and deer are fascinating to watch up close as they feed. However, setting out seeds, fruit and corn to attract them can create unexpected consequences. Over time, the animals’ behaviors and food habits change, too.

For example, wellbeing and survival are threatened when certain wild animals gather to feed.

“Raccoons and opossums don’t congregate in large groups in nature,” said Heiser, who has worked in conservation education for more than 25 years. “Dispersal is nature’s way of controlling competition and transmission of diseases.” Bringing them together for feeding can harm them more than it helps.

Likewise, feeding deer corncobs and salt blocks is entertaining at first, but they can become a nuisance once that food is gone. They know there is no need to forage in the woods when residential landscapes are filled with tasty alternatives, such as azaleas, shrubs and fruit trees.

“One person feeding deer can set up an entire neighborhood with problems,” Heiser said.  Also, according to state wildlife regulations, it is illegal to feed deer or elk in Virginia between Sept. 1 and the first Saturday in Jan., statewide.

What about bird feeders?

Turkey, quail and grouse are ground feeders that hunt insects, seeds and grubs. In a world with healthy ecosystems, neither they nor songbirds should need people to provide seeds for their survival, according to the DGIF. An exception is when conditions are most harsh, such as during extremely cold weather or after a major snowstorm, but intentional feeding should be limited to those times.

The black bear population is strong in Virginia, with sightings reported in every county. They are not only intelligent; they can smell pet food and bird food as far as 20 miles away. DGIF’s Habitat Gardening for Wildlife (PDF) article reported that at least 30 percent of bear complaints are attributed to bird feeders, and 50 percent are related to garbage bins left outside.

“Bears are opportunistic omnivores that forage on berries and insects or carrion,” Heiser explained. “Our garbage cans give them a smorgasbord in our yards.” 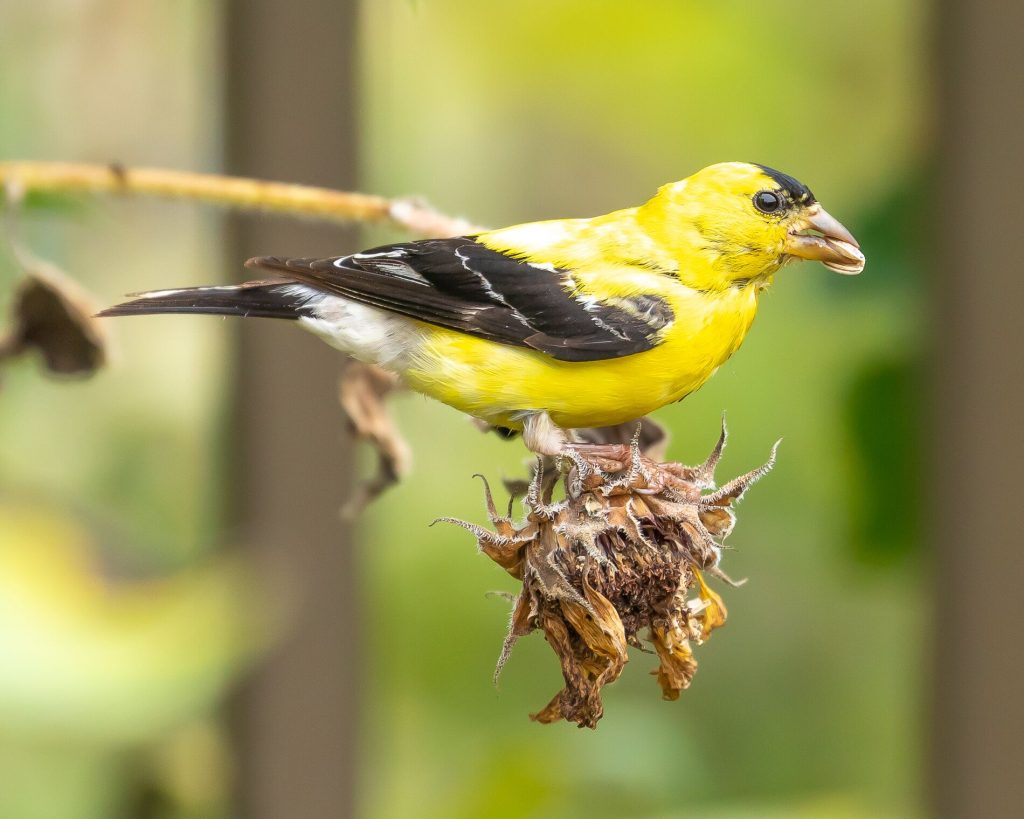 Adaptable and intelligent, bears easily open and rummage through trashcans and dumpsters. They sometimes return to the same site year after year, leaving broken feeders and trampled fences in their wake. They also train their young where to find easy-access meals, so the challenges can continue with the next generation.

It is illegal to intentionally feed bears in Virginia. If a bear is spotted using a bird feeder, Heiser said it is best to remove all feeders. Pet food dishes and garbage cans should be moved inside as well until the bear moves on or hibernates. Also, meat scraps should never be added to the compost file.

Like bears, coyotes live in the wild across Virginia. They typically prey on ground birds, small mammals and pets. Since they have a natural fear of humans, encounters seldom occur, unless someone is feeding wildlife.   Also, according to DGIF’s Living with Coyotes (PDF) brochure, small pets should be supervised when outside and small dogs walked on a leash, so they do not become prey.

Rather than feeding wildlife, Heiser encourages homeowners to support healthy ecosystems by providing native plants and habitat structure. For example, native seed sources like partridge peas act as a groundcover and viburnum shrubs produce berries. Wildlife benefits from each layer of the habitat, from ground mulch and herbaceous shrubs to treetop canopies. Evergreens, deep shrubbery and hedgerows offer birds and mammals protection from predators and wintry weather. The protective canopy of trees is ideal for roosting and night sleeping.

Homeowners upset nature’s plan with their preference for pristine landscapes. Heiser suggested not bagging and removing fallen leaves. Instead, shred them by running over them repeatedly with a lawnmower, and then return them to the base of shrubs and trees. As the leaves rot, they provide organic nutrients for the soil and offer habitat suitable for smaller animals, reptiles and insects.

Brush piles can cause problems in cities and subdivisions because the wildlife they attract can sometimes become a nuisance. However, in open settings like fields, brush piles should be left as nesting and cover for rabbits, foxes and birds.

Heiser added, “Wildlife should be left wild. What we do in our landscapes really does matter.”

This article originally published in the Richmond Times-Dispatch in November 2019.

Want to learn more? DGIF is a sponsor of the Chesapeake Conservation Landscaping Council’s Turning a New Leaf Conference on Dec. 6, 2019 in Harrisburg, PA. The focus is innovative practices to improve the Chesapeake Bay through conservation landscaping.