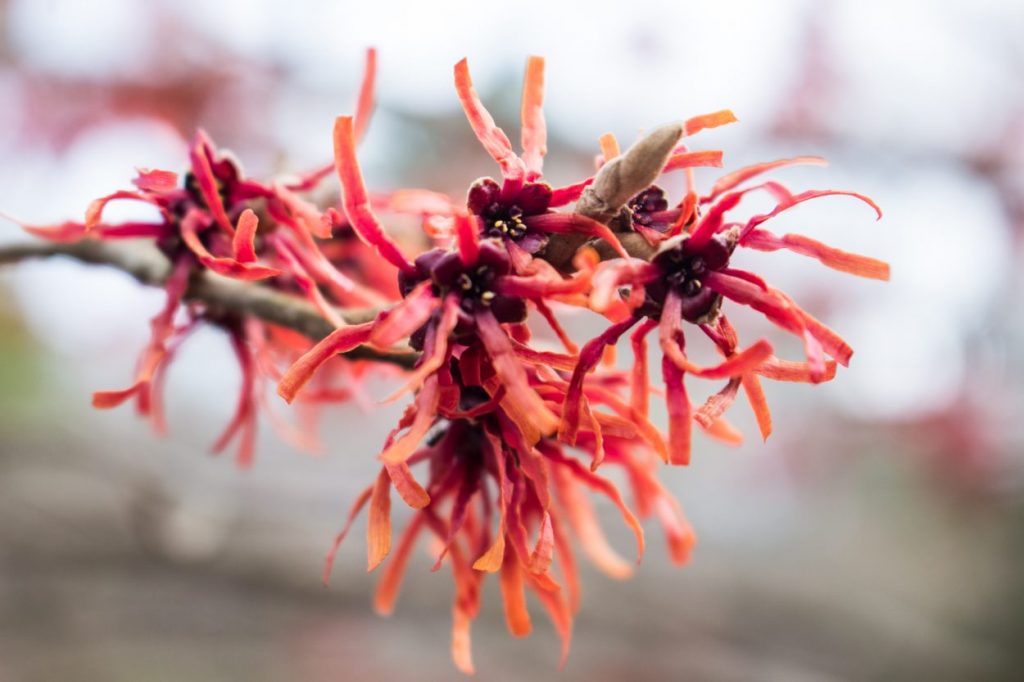 This hybrid witch hazel, Hamamelis × intermedia ‘Diane’, brightens up the Garden on a cold winter day. The blooms look  a bit like fire crackers, don’t they?

Witch hazel always rings a mystical note. Blooming in the middle of the winter, those delicate bits of yellow, copper, or red ribbon blow outward from bare branches like sparks of fire, as if an invisible sorceress were working her spells and enlivening the winter slumber. Seasoned gardeners understand the quiet delight of walking outside on a brisk winter morning and finding those golden, fragrant blooms lurking around the corner. They are the blooms of hope, a sign for restless gardeners that spring is very close.

Among all the winter blooms, witch hazel is probably best known for its medicinal and topical uses. In fact, it is one of a few plants approved by the Food and Drug Administration (FDA) as a non-prescription drug ingredient. You can easily find an extensive collection of products containing its extract at your local drug store — facial toner, acne lotion, deodorant, bruise spray, bug spray — you name it. For centuries, ever since Native Americans introduced it to the early settlers as a poultice to alleviate swelling and irritation, witch hazel, a magically versatile plant, has played a major role in the service of human health.

Did you know that the Iroquoi would treat dysentery, cold, and cough with witch hazel tea?  Or that the Potawatomi steamed the twigs over hot rocks to sooth sore muscles (similar to how we use therapeutic herbs in modern-day spa and sauna)? Or that the Osage used the bark of this plant to cure skin ulcers and sores? Legend has it that witches use witch hazel as a guard against evil forces and a cure for broken hearts. I am not a witch, but I can attest to its healing magic: Simply thinking about those colorful, fringy leaves (the botanical term is “bracts“) curling up on frosty days and opening up again on warm days, bursting with shades of golden, copper, and burgundy amidst an almost dormant garden, I feel grateful for the nature’s bounty that surrounds me, cultivated and nurtured by mindful hands generation after generation. If witch hazel had a voice, it would tell me folktales of a time gone by, of cultures and traditions far far away, and of the people who boiled, pressed, and steamed it to heal and cure others. I usually joke with my friends that if you ever have a bad day, find the wise old witch hazel and whisper your sadness away. 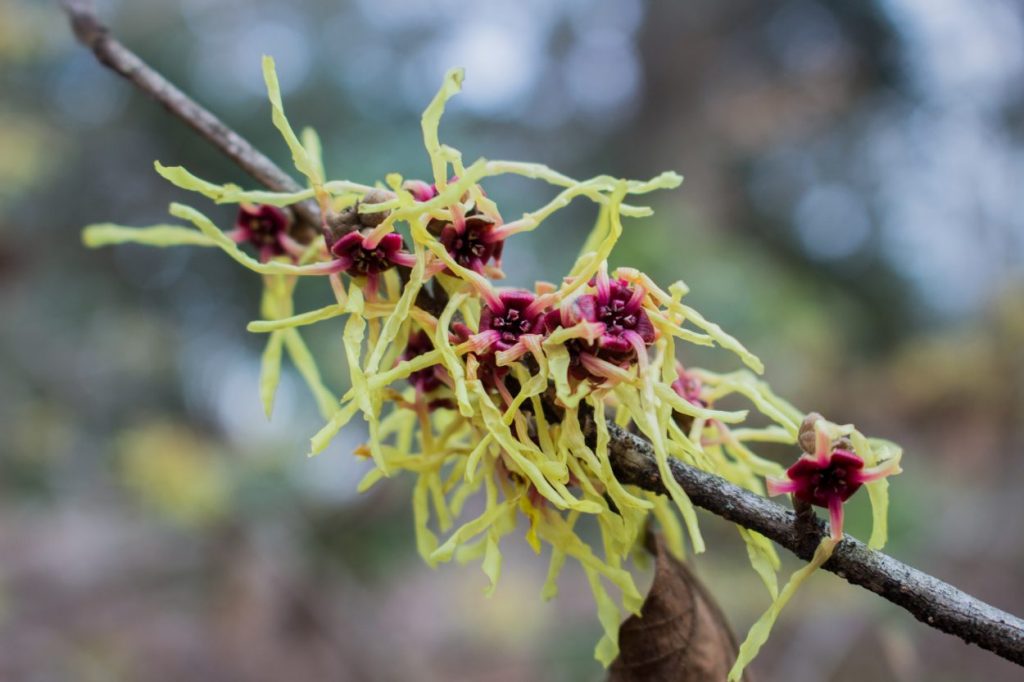 For centuries, ever since Native Americans introduced witch hazel to the early settlers as a poultice to alleviate swelling and irritation, witch hazel, a magically versatile plant, has played a major role in the service of human health.

Another magical quality of witch hazel is its contested use for water dowsing. Skeptics may argue otherwise, but early settlers have been using forked witch hazel branches that grow in a north-south orientation to find underground streams for centuries. These  “water witches,” as they were called, would comb the land with their divining rods, waiting for the twig to bend slightly — signaling a water source beneath. They believe that as witch hazel prefers damp woods and stream corridors, the plant has a spiritual power to detect this essential element of life — water. The use of witch hazel for water dowsing is also where the plant’s name originated: ‘witch hazel’ is said to be derived from the old English wican (to bend) and + hæsel (any bush of the pine family).

Lewis Ginter Botanical Garden cultivates many species of witch hazel, from the native Hamamelis virginiana and Hamamelis vernalis (common witch hazel with yellow-gold blooms) to Eastern species from China and Japan, which arguably have the best fragrance. Because the American species tend to bloom in winter and the Asian ones in spring, a walk through Flagler Garden during this time of the year can be extremely gratifying. You may come upon one type of witch hazel or another, calling to you from afar with their deeply-perfumed smell and bright colors. Blooming time varies depending on the weather, but peak bloom occurs between mid-January and mid-March, here at Lewis Ginter. So now is the perfect time to see several varieties in bloom.

Flagler Garden horticulturist Leah Purdy shared with me that witch hazel is one of her favorite plants (high regards from Purdy, because it’s a short list). “Witch hazels are great for providing four seasons of interest in your garden,” she said. “They are one of a few things blooming in the winter through early spring and their bright colors really help pop your landscape. Also, the leaves turn a really pretty fall color with a predominant yellow and some reddish orange overtone; and in the summer, they make a nice little screen of green at the back of your garden.” 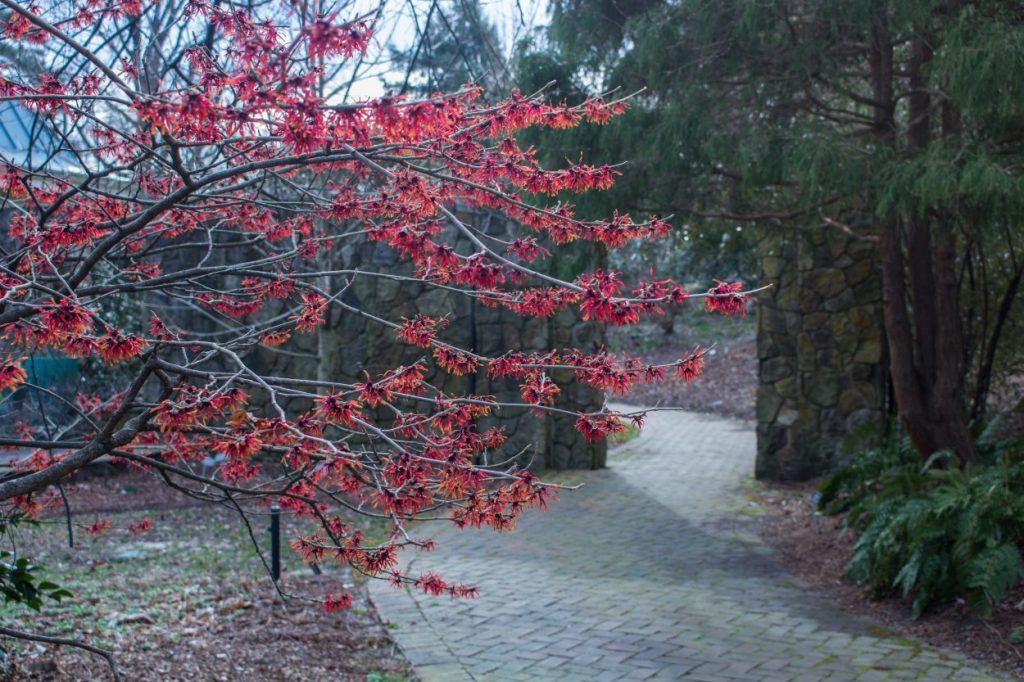 What a delight to stumble upon this witch hazel grove in the Flagler Garden, when other blooms are still dormant. While American natives grow horizontally, in an open spreading fashion, the Asian natives and hybrids (such as this Hamamelis × intermedia ‘Diane’)  form a vase shape and are great situated near a pathway. 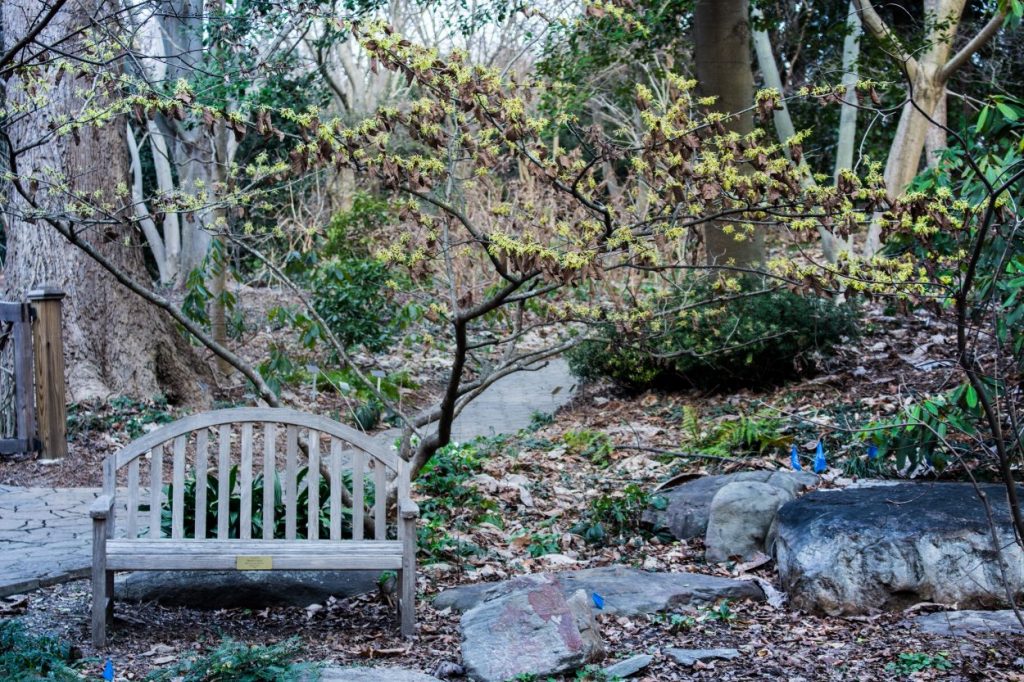 Unlike its more ornamental Asian cousins, Hamamelis virginiana, a Virginian native, is well known for its versatility and medicinal benefit.  Some think the twigs of this native witch hazel have the power to detect underground springs and water sources. Perhaps if I sit here for a while under the witch hazel’s charm, I may find out the secrets of the universe?

Next time you visit the Garden, stop by and say hello to these witch hazel groves.  They are the plant of hope, and who doesn’t need it these days?

All Garden visitors enjoy half-price admission to Lewis Ginter Botanical Garden Monday, Jan. 16 – Tuesday, Feb. 28, 2017. During this time only, Garden admission is $6 for adults and seniors and $4 for children.

Lewis Ginter Botanical Garden is one of the best places in Richmond to play the new augmented reality game Pokémon Go. The Garden has 20+ Poké Stops scattered in close proximity throughout the grounds, plus two Poké Gyms.