Don’t let invasive species fool you. They look innocent, but don’t behave. Nor do they stop growing, spreading and reproducing. The culprits are certain species of aggressive non-native vines, trees, shrubs, herbaceous plants and grasses. Some look exotic, promising to add pizazz to your landscape. Others serve a purpose, such as ground cover, erosion control or screening. However, along with the positives can come negatives − challenges every landscaper and homeowner should recognize and understand. 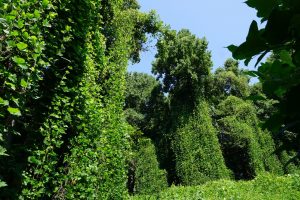 Kudzu (Pueria montana), an East Asian native, was introduced to America as a “wonder plant” in 1876. Today, it is nicknamed “The Vine that Ate the Deep South.” Photo by Ashton Fisher

The issue begins when a non-indigenous plant species is introduced into a new ecosystem. It can be a country, state or region in which it didn’t naturally evolve. Sometimes the introduction is intentional, such as kudzu’s journey from Asia to the U.S. Centennial Exposition (1876 World’s Fair), where it was marketed as a “wonder plant” offering natural shade and ornamental beauty. Other times, the non-native species is a sneaky hitchhiker on travelers and their belongings, or perhaps a stowaway in seed mixes and packaging materials.

Regardless of the original mode of transport, the introduced species makes itself at home in its new location. Some non-indigenous plants that are prolific but not high threats are English ivy and heavenly bamboo, which require ongoing maintenance to keep them within boundaries.

The bigger concern is the highly aggressive species that spread exponentially until wreaking havoc on the ecosystem. It can be a slow process, subtle and initially unnoticed by man. Yet over time, the strong aggressors can infest lawns or choke out commercial crops. Some threaten native plant populations, even hybridizing with the more vulnerable.

When an introduced species is shown to cause harm, it is then considered an invasive species. Virginia Department of Conservation and Recreation (DCR) gathers information on the species’ biology, ecology, harm caused and management considerations. An invasive species rank is assigned, and it is added to the DCR Invasive Plant List of Virginia. The list, which is non-regulatory, is used primarily for educational purposes. A native plant in one region or state can be deemed invasive in another.

Through a ripple effect, the adverse impact can extend to pollinators, insects and wildlife that rely on native plants. They not only lose their hosts; they lose their preferred shelters and habitats. Some non-indigenous aggressors also alter natural processes, such as soil chemistry and water flow in forests, marshes, wetlands and waterways.

“There are invasives that are really damaging our natural areas and impeding the ability of native plants to grow,” said Ruth Douglas, an educator for the Virginia Native Plant Society. She referenced garlic mustard, which poisons the soil around it and inhibits native plant growth.

“Everything is tied together,” noted Douglas, a biologist by background. “We must maintain a good stock of native plants in natural areas and yards because there is an important connection between native plants and native animals, such as birds and caterpillars they feed on.” And, in the scheme of natural processes, their healthy existence affects man.

Why not just pull up the high-threat troublemakers? Invasive species are too plentiful and continually spread through their seeds, which are eaten and haphazardly dispersed by wildlife. Some have underground runners that run amuck, or vines that exhibit rapid growth – as much as a foot a day. For example, kudzu smothers natural resources along interstates and byways of the South. In such cases, only significant time, labor and money can control or eradicate the intruders, if at all.

“Invasives are a big problem and a complicated problem,” Douglas said. However, homeowners and landscapers can be part of the solution, starting with prevention. Learn which vines, trees, shrubs, herbaceous plants and grasses pose a serious threat in our Zone 7. Avoid purchasing, planting and sharing them. Encourage suppliers not to sell them. Also, follow regulations about bringing plants home from vacation or overseas travel. The rules are in place for a reason.

If you already have highly invasive plants in your landscape, try to control their boundaries and growth as much as possible. Destroy their seeds and runners. Better yet, consider replacing aggressive aliens with indigenous plants. After all, native is what nature intended.

This article first published in the Richmond Times-Dispatch in September 2017.

A garden where all plants are native