There’s nothing itsy bitsy about this spider – or any of the other pollinators featured in David Rogers’ Big Bugs exhibit – a collection of 10 wooden sculptures that arrived at Lewis Ginter Botanical Garden last week. 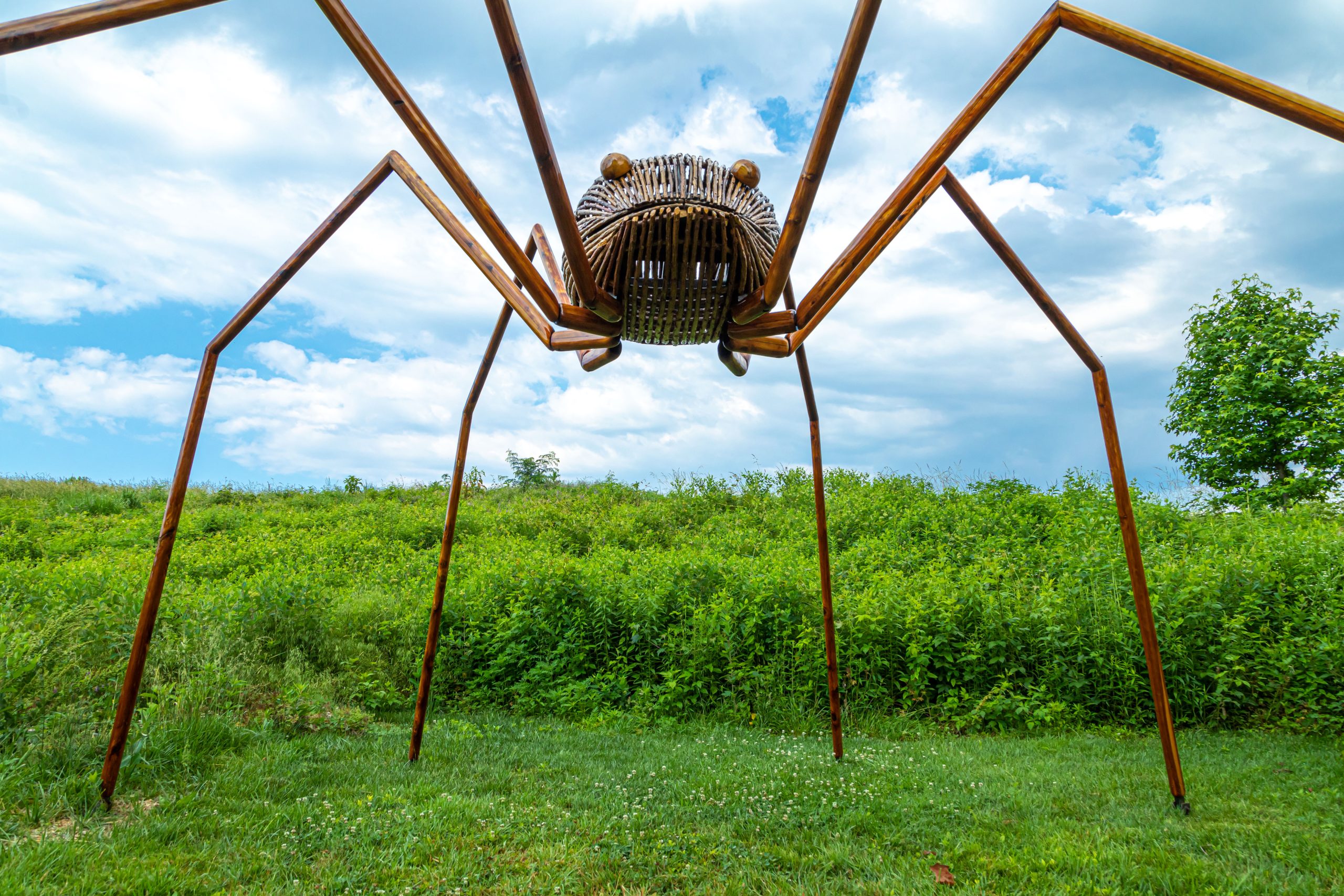 In addition to looking cool, the massive creatures – made up of found or fallen whole trees, willow limbs, twigs, branches and other forest material – are meant to educate garden-goers about the important role pollinators play in maintaining the Earth’s ecosystem.

According to the U.S. Forest Service, without pollinators, the human race and all of earth’s terrestrial ecosystems would not survive. Of the 1,400 crop plants grown around the world, including those that produce all food and plant-based industrial products, nearly 80% require pollination by animals. 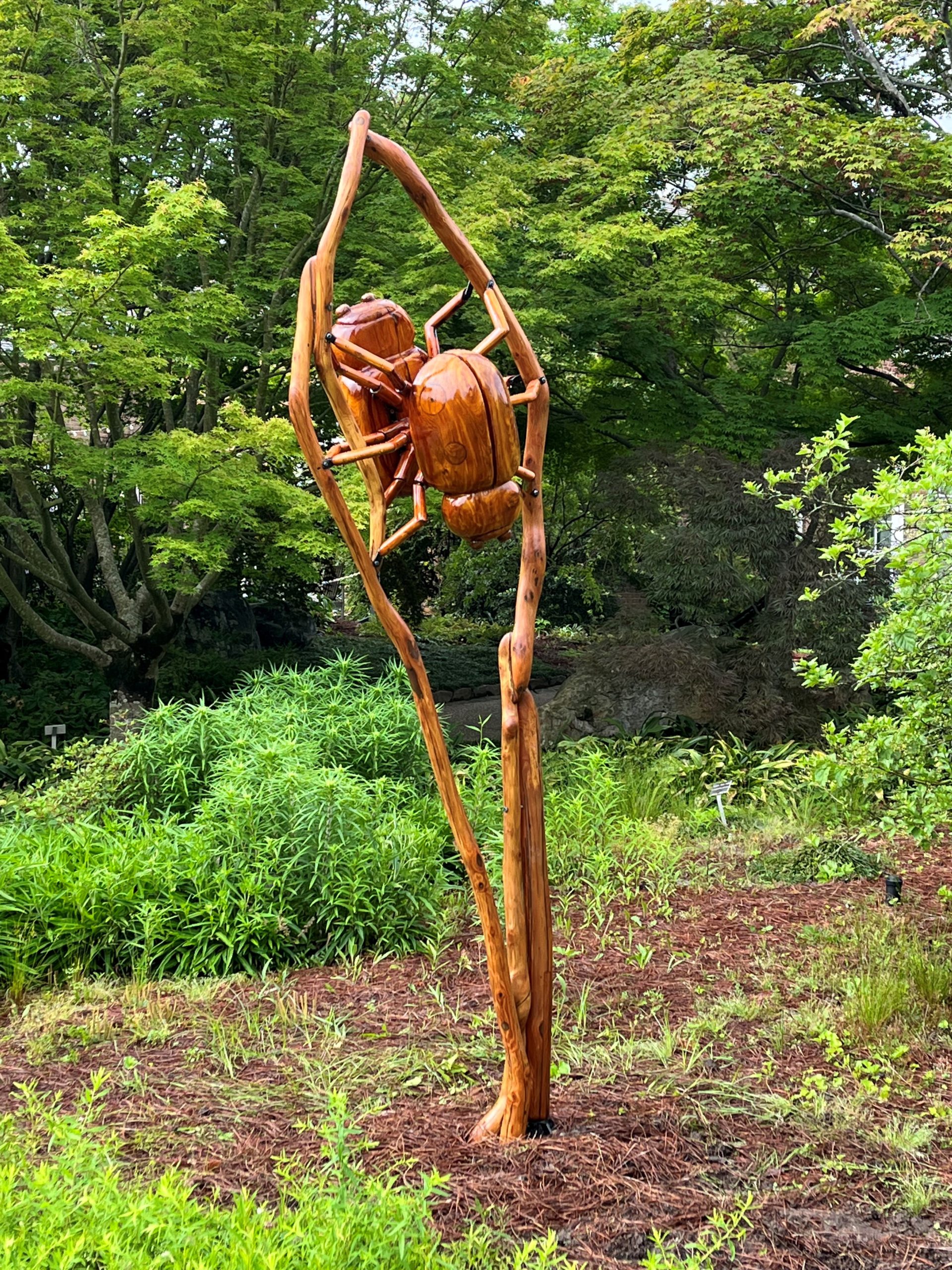 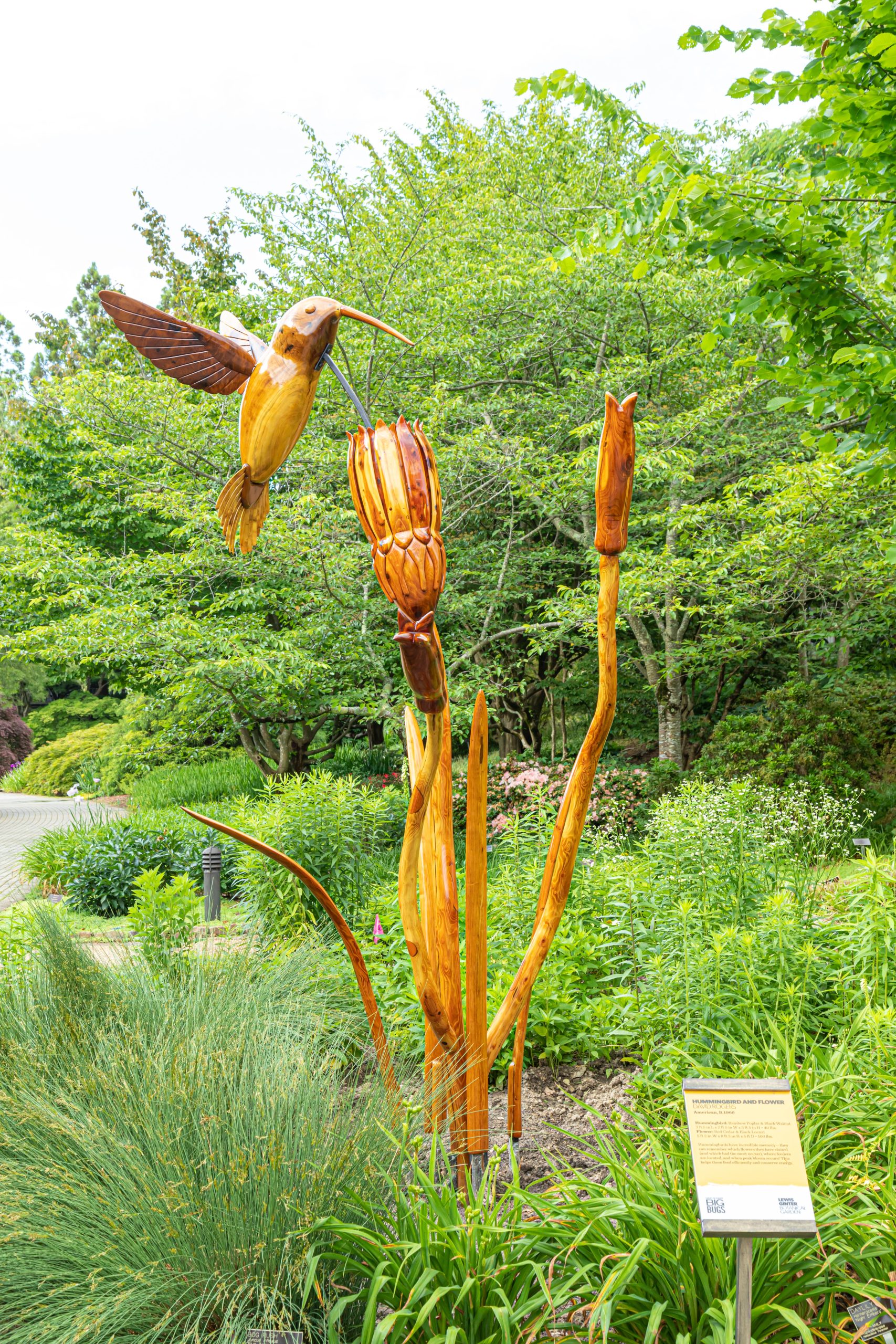 Hummingbirds are pollinators too!

“I was interested in the subject matter because I’ve always been fascinated with them, I mean, even as a child,” Rogers said about his decision to sculpt the bugs. “We take it for granted that insects exist, but the thing is that we exist because they exist, not the other way around.”

Rogers found the value of interacting with the natural world at a young age. As a child, he would follow carpenter ants around his yard, watching them conduct what he jokingly referred to as “independent study,” drilling holes and connecting tunnels.

Now that the exhibit is in its 30th year of traveling around the country, Rogers reflected on the project’s origins and its evolution.

“My theory is that artists may or may not get one good idea in their whole life, maybe two, and everything they do after that is really a reinterpretation of that same idea,” he said. “I think that moments of inspiration are so rare that if you have even just one, you’re really lucky.”

Rogers’ artistic career, therefore, is like a tree. It’s rooted in a singular moment of inspiration – to use fallen tree parts in an unconventional and imaginative way – and has since branched out into several different projects, the last of which being the Big Bugs.

His first endeavor was creating stick work furniture, weaving together pieces of wood to make chairs, a bedframe, and even an entire gazebo.

Then one day, the figurative tree of his career grew another branch when his cousin asked him to remove a bent-over sapling that had grown behind his house.

“I saw it as the backbone of a dinosaur, and that was a big moment for me because it was so abstract,” Rogers said.

His vision came to fruition in 1993 with “Stickasaurus,” a massive dinosaur sculpture made out of tree limbs that were displayed in Longwood Gardens in Kennett Square, Pennsylvania. When staffers at a botanical garden in Dallas saw his creation, they asked for a sculpture of their own, Rogers recalled.

“They said that they didn’t want dinosaurs though because that didn’t work for them,” Rogers said. “So I started thinking of botanical gardens and appropriate subject matter, and I began to think, what if I made insects on this dinosaur scale?” 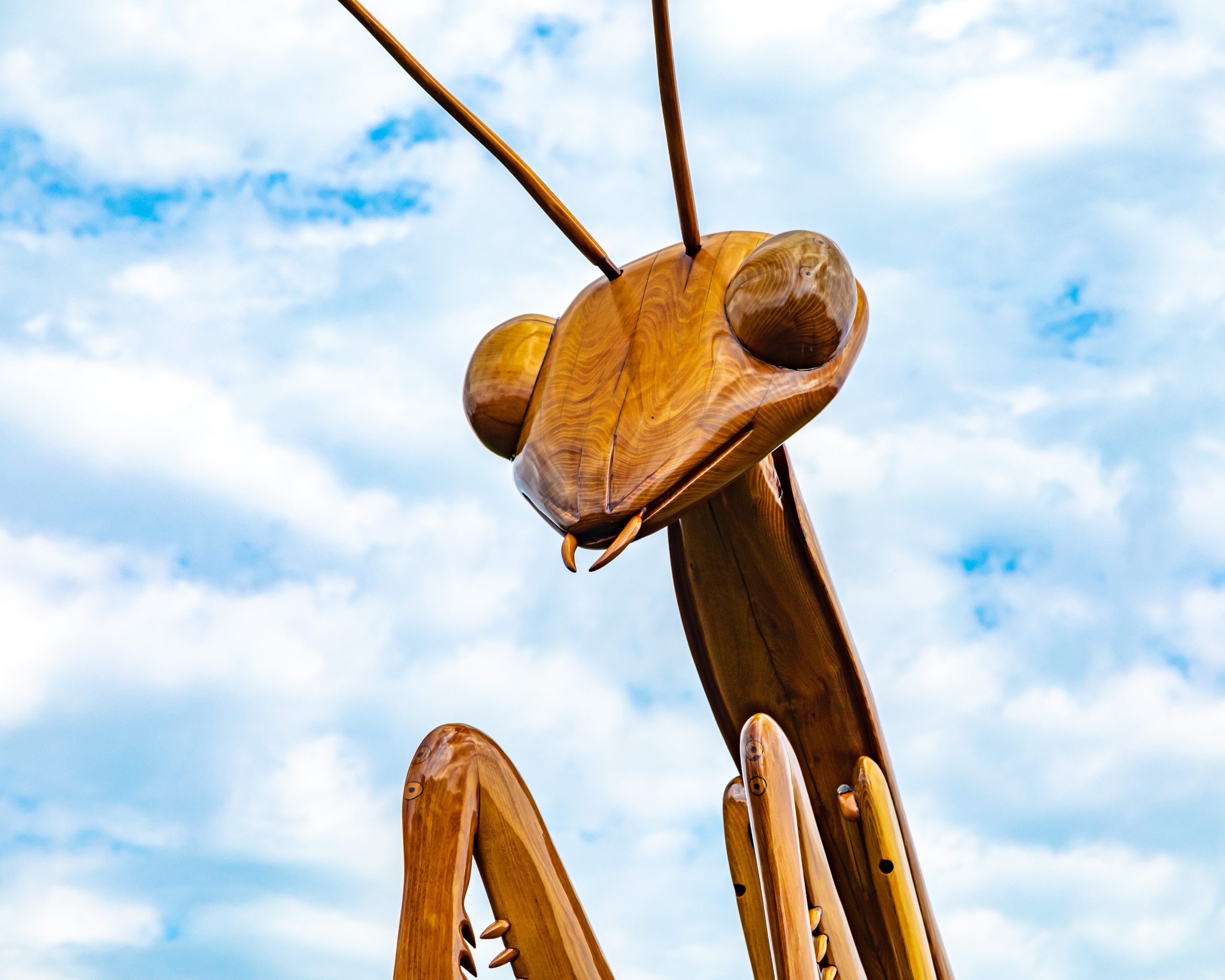 He arrived at the idea to create a tribute to the “hidden gardeners” – the pollinators that humans would not be able to live without.

But this wasn’t the first time Rogers was drawn to insects as subject matter. In high school, one of his first sculptural endeavors was the creation of a dragonfly and a housefly through welding.

“So I must have thought bugs were a good subject matter even as early as when I was a teenager,” he said, explaining that even the earliest parts of his artistic career have contributed to his work today.

Though celebrating the role of pollinators is the central element of the exhibit, as the Big Bugs were transported from garden to garden across the U.S, the reason behind their creation began to evolve, Rogers said.

“I was like, I just get to play this role to help the botanical gardens with their appeal to wider audiences and their mission statements for preservation and conservation,” he said.

In addition to their purpose, the physicality of the sculptures is constantly evolving, Rogers explained. Since they are created with raw, natural materials, they break down rather quickly, some having a lifespan of less than three years.

“What people don’t see is the endless days, weeks and months of restoration we’ve got going on,” Rogers said, “Some stay together better than others, but most if not all of the bugs require work between places.”

The exhibit will be at the Lewis Ginter Botanical Garden until Aug. 28, after which Rogers already has some ideas about aesthetic and engineering changes he would like to make happen.

“I’d like for the hummingbird wings to be animated like the ones on the dragonfly,” he said. “I want to create the illusion of flight. It would be a couple years from now and it would take a lot of work, but that’s just a part of the challenge and that’s what I like.”

Editors Note: This article was first published in the Henrico Citizen. 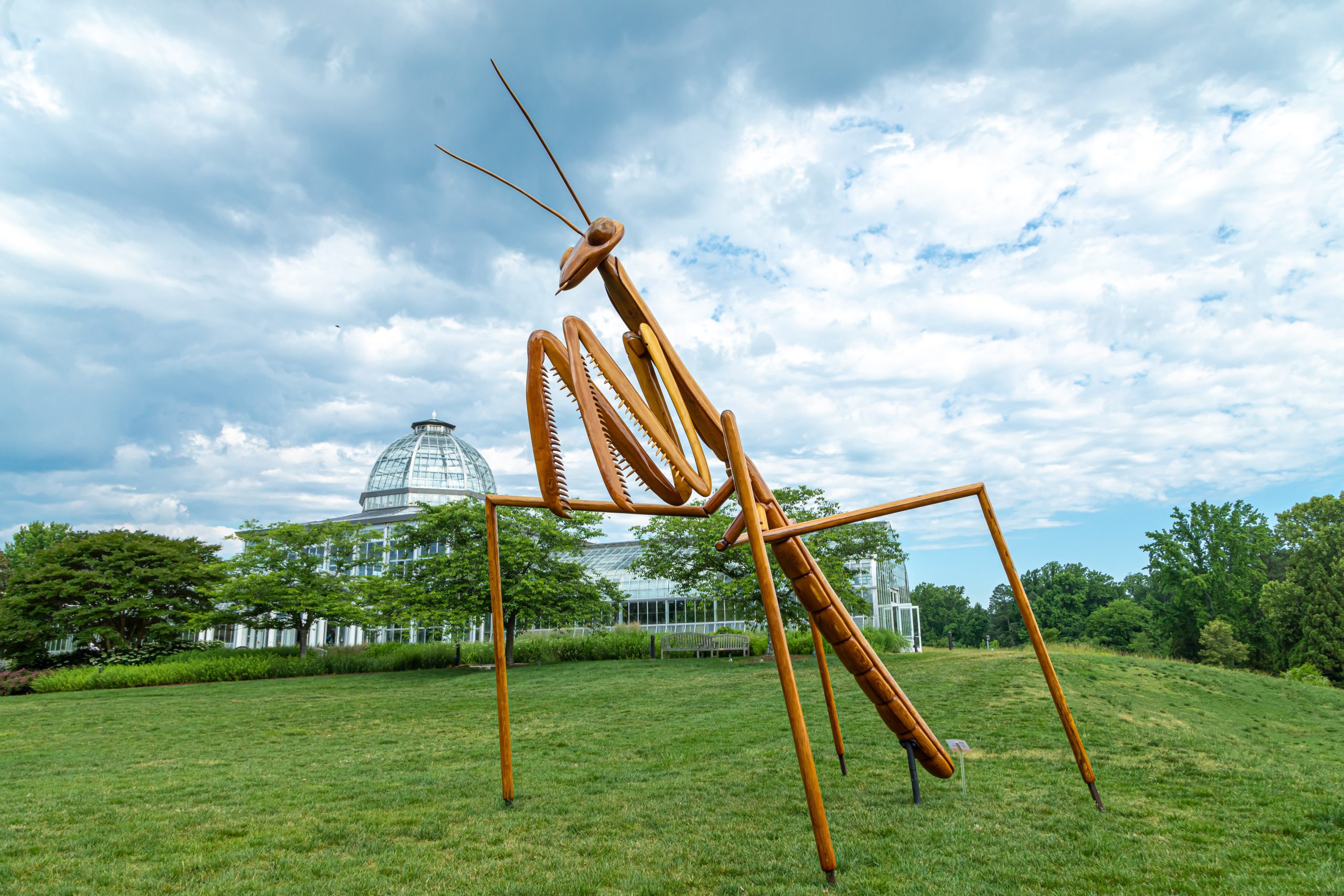 Kate is a rising senior at the University of Richmond studying Political Science and Journalism. She is a news intern with the Henrico Citizen where she writes community features and new stories.