Can You Find Our Bluebird Boxes? 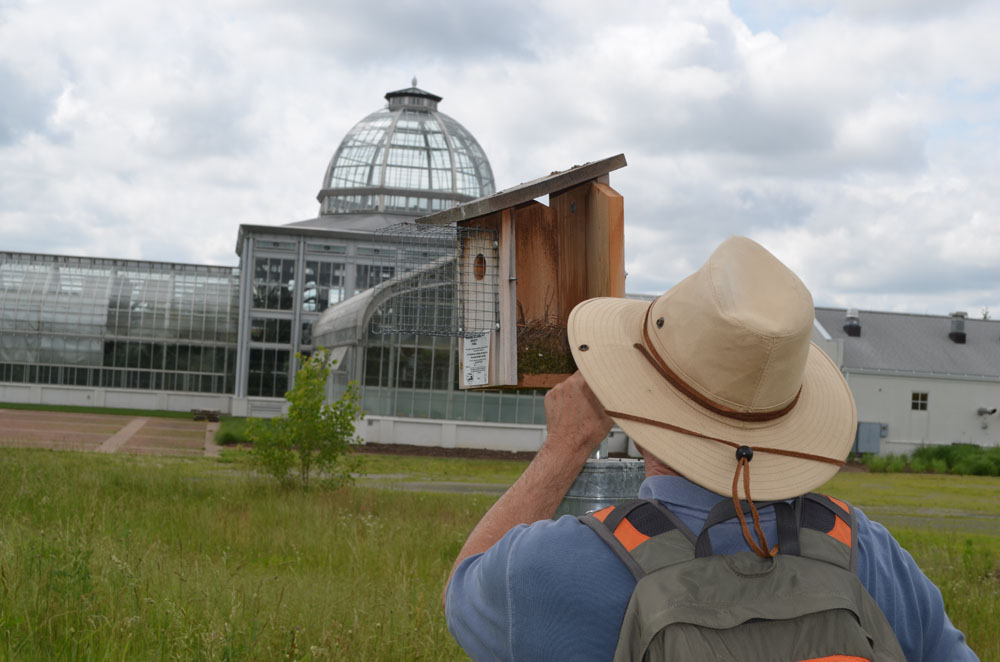 Buz Sawyer opens one of the bluebird boxes near the Conservatory in the Vienna Cobb Anderson Meadow. Inside are the possible beginnings of a new nest.

Growing up in the countryside, I spent warm days running barefoot through the backyard, ducking beneath the weeping willow limbs that swayed wild in the breeze. I would always peek into the crook of the weeping willow as I passed, at the spot where all the branches grew out from. Sometimes, I would be rewarded with the sight of a robin’s nest. If I was even luckier, I would see a little cluster of three eggs, bright blue and beautiful against the weathered brown nest. If I was the luckiest kid on the planet, I would see baby robins with their beaks open, necks reaching. Sure enough, through the trees, I would be able to spot mother robin, out searching for food for her young. Her warning calls were enough to make my visits to the baby birds short, but I would be back the next day just to make sure they were okay. I both looked forward to and feared the day when the nest would be empty, all the babies having grown up and away to raise families of their own. 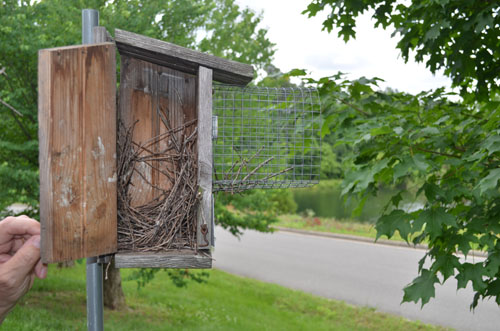 This stick nest inside box number 7 belongs to a house wren. Bluebirds prefer a softer nest made of straw.

I never met my grandmother Nancy before she passed away, but from the stories I’ve heard, I know I get my love for nature and all living things from her. She was well-known in our family for taking binoculars with her everywhere and pulling the car over on the side of the highway if she spotted a new species of bird she could add to her bird list. When I started visiting Lewis Ginter Botanical Garden a few years ago, it was because I loved Sunday afternoons spent walking in the sun through the Cochrane Rose Garden and visits with old friends on my favorite bench in the Streb Conifer Garden. I love flowers with their brilliant colors, but maybe even more than that, I love bird songs. I didn’t realize it until now, but I think that love for birdsong is a rope stretching through time that keeps me connected to my Grandma Nancy.

Naturally, when I found out that Lewis Ginter Botanical Garden has a bluebird trail, I immediately thought of my her. In my Grandma’s honor, I went out to explore the trail and learn more about bluebirds with Buz Sawyer, garden volunteer. The Lewis Ginter Bluebird Trail itself stretches around the perimeter of the Garden, and it’s been here for more than 10 years now! If you’ve been visiting the Garden for years and never heard of it, you’re not the only one. “You’d be surprised at how many people don’t know about the bluebird trail,” said Sawyer, who has been running the trail’s upkeep and monitoring efforts since 2012, and volunteering at the Garden since 2005. With a little searching you can find 14 different bluebird boxes on the trail. The easiest ones to find stretch along the top of the Anderson Meadow, adjacent to the Conservatory, on the line where the grass is kept mowed and the meadow is allowed to grow wild. Here, you’ll find two bluebird boxes, and you’ll find another nearby in the Children’s Garden near Sand Play. 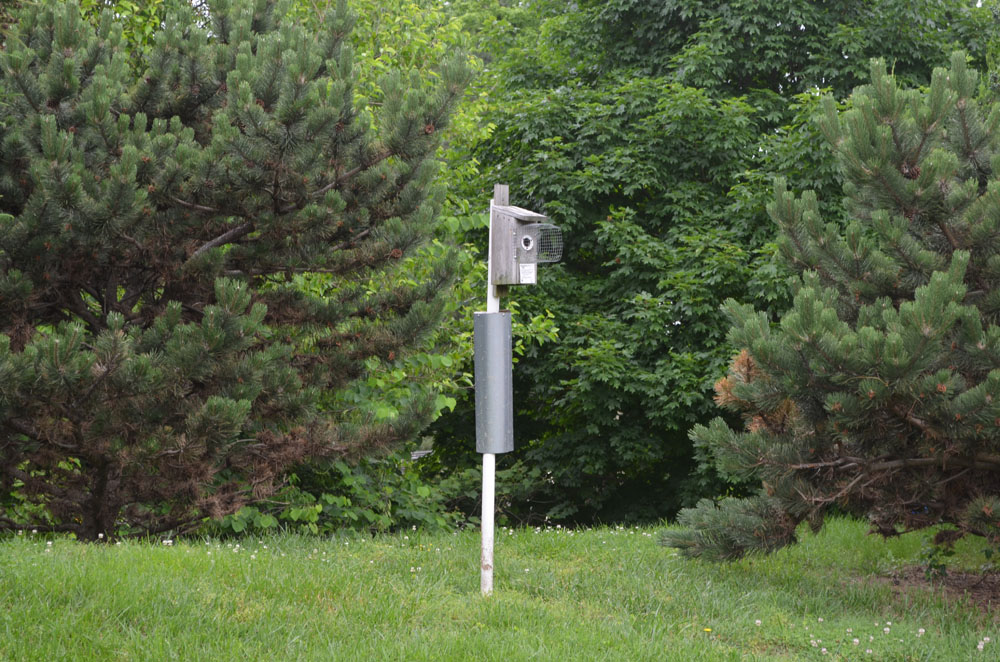 This bluebird box is located along the back road behind the Conservatory. You can see the metal guard along the bottom of the pole, as well as the metal box around the opening to keep predators out.

The bluebird boxes, which are built by dedicated volunteers, have a unique design that protects the bird nests from predators and bad weather. The box itself is made of wood and looks like a traditional birdhouse, except the hole in the front is sized specifically to suit bluebirds. Sticking out from around the hole is a metal box that’s open at both ends to allow the birds to come inside, but keeps raccoon and cats from getting their paws on the eggs inside. The bluebird box is situated at the top of a metal pole, which is often coated with petroleum jelly to keep ants from climbing up into the nest. Also attached to the pole is a metal guard that keeps snakes and other predators from climbing up the pole into the nest. 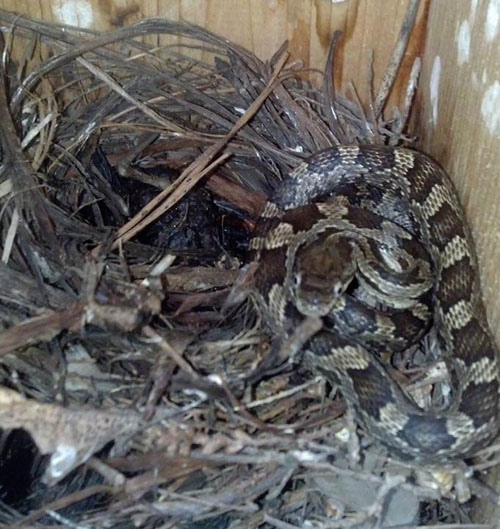 Our volunteers are careful to put the boxes away from trees because predators like to drop down onto the box from above, as this rat snake did.

In addition to helping install these bluebird boxes around the Garden, Sawyer and other volunteers regularly monitor and record data about the birds that build nests in the boxes. The bluebird trail has been registered as part of the Virginia Bluebird Society for five years, and as part of protocol, our volunteers start monitoring some time between March and April 1 and continue through the whole of mating season, which ends in September. Not all boxes will have nests in them in any given mating season, and certainly not all at the same time. Some boxes are more popular and successful at fledgling young birds than others. And while 13 may be unlucky for some, box number 13 at the Garden is the most successful at hatching fledglings. Not every box will become a nesting spot for bluebirds. House wrens also love our bluebird boxes, as do house sparrows and starlings. The latter two birds are considered invasive species and volunteers remove their nests, before they get established, so that our native bluebirds can have an advantage on their own turf. 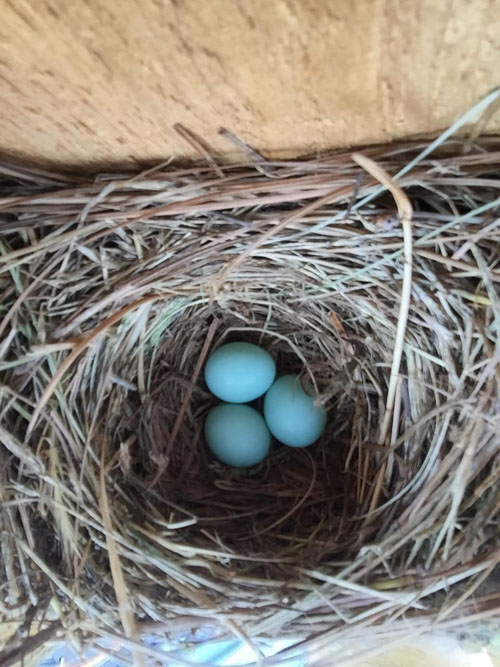 Three bluebird eggs in a nest in box 13, located in the Anderson Meadow. Sawyer expects one or two more eggs to be laid before the incubation period begins, where the mother will sit on the eggs until they hatch.

Bluebirds have lots of predators and competition for nesting space can be fierce, but the biggest roadblock that keeps them from flourishing is lack of woodland. “Once upon a time, the whole East Coast was forested over,” Sawyer explained to me. “But we’re neat creatures. We don’t like dead things, so we’ll take out a dead tree for example. That reduces the amount of cavity space [for bluebirds to build nests in].”  As Sawyer put it, “We target helping bluebirds because, for many, many years, they were on tremendous decline. We’ve managed to rebound their numbers, but we recognize that without the efforts of the Bluebird Society, this is a species that could very easily go into a rapid decline and then disappear altogether.”

So far this year, the bluebird boxes have had a few nests, but no bluebirds have fledged yet. Sawyer recently spotted a new nest in lucky box number 13, and as of this week has three new eggs. It’s hard to say so early if this nest will be successful, but our fingers are crossed. Next time you’re at Lewis Ginter Botanical Garden, take note of our bluebird boxes. Just remember, don’t touch them. If you love bluebirds and want to help the population rebound, Sawyer has an important message for you: “You can have a bluebird house at home and you can do your own bluebird monitoring.” Learn more about building and maintaining a bluebird box from the North American Bluebird Society.

Now that I know about the bluebird trail and have seen several of the boxes for myself, I’ll be visiting them more often. And every time I do, I’ll be thinking of my Grandma Nancy with her birding binoculars and that old weeping willow tree in my childhood home’s backyard. Life always seems to find a way,  but with the help of bluebird boxes and volunteers, bluebirds now have a better chance.  I stand here in awe of every living thing’s persistence and drive to keep on living. I stand in awe of volunteers like Buz Sawyer, who come back week after week for no other reason except that they care an awful lot. I stand in awe at the opportunities to connect with other people and with nature that the Garden affords me every single time I’m here. I know my Grandma Nancy would have loved this place as much as I do. 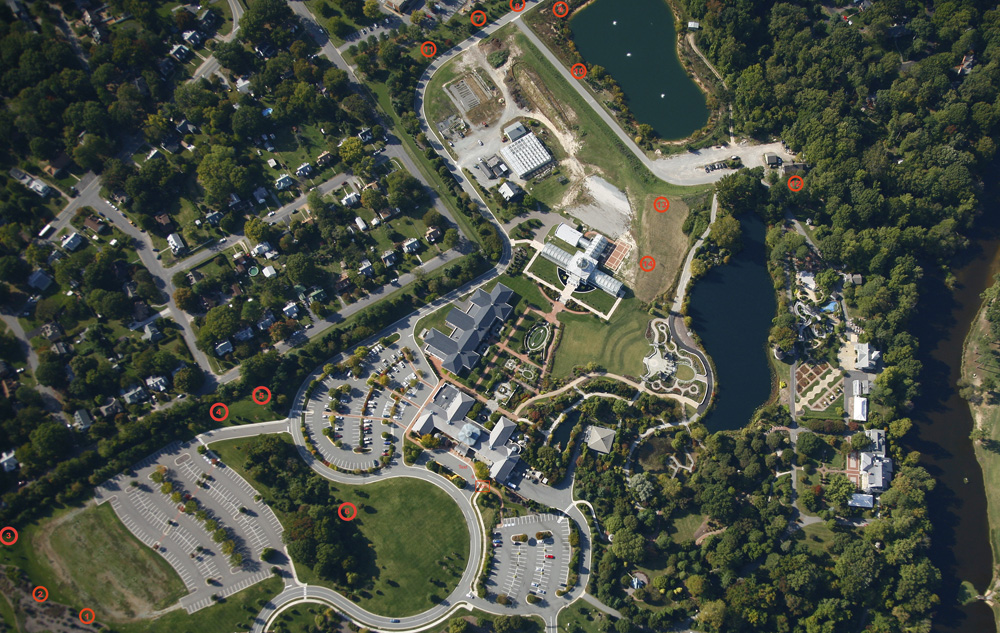 Here is a map of where all the bluebird boxes are located. How many can you find?