The explosion of craft beers is no surprise,” said Chris Ray, co-founder of the Center of the Universe (COTU) Brewing Company. Neither is the explosion of growing hops. As a main ingredient in traditional IPA-style beers, breweries, brewmasters and home brewers are planting hops in everything from backyard containers to full-scale brewery gardens. 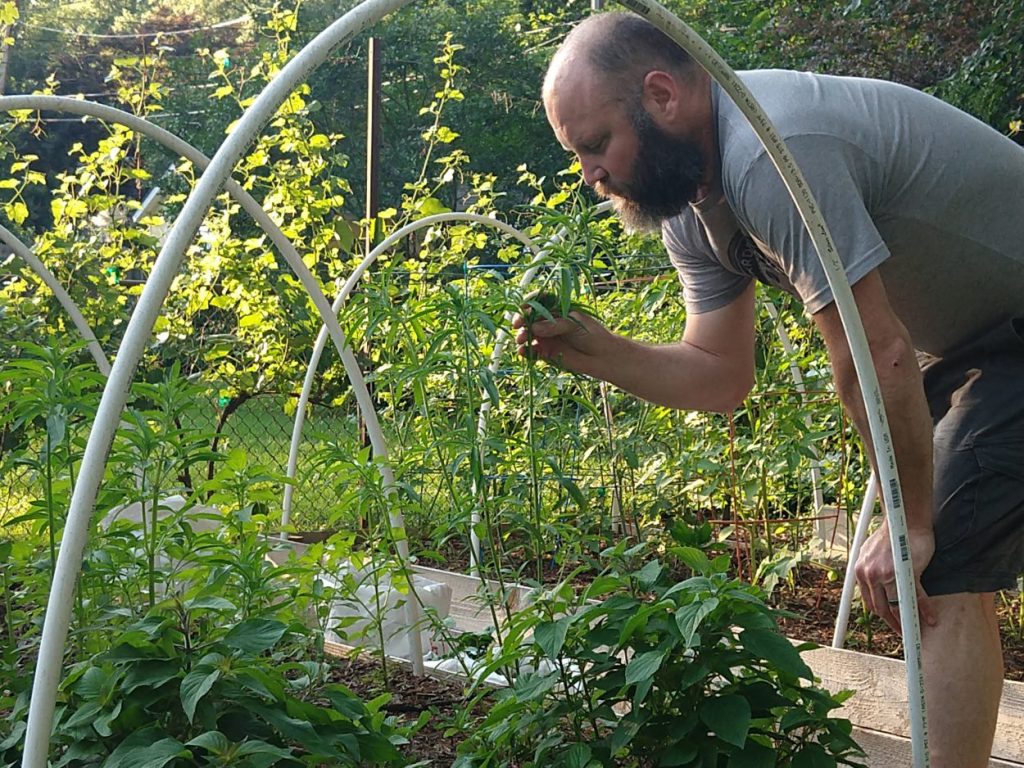 In 2015, COTU decided the public needed to learn about beer’s roots (literally). Ray and his family were members of Lewis Ginter Botanical Garden, so they approached the horticulturists about a demonstration garden. “Folks needed to see how hops grow and how beautiful the plants are that make beer so tasty,” Ray said. In no time, Ray and his brother, Phillip, planted hops (Humulus lupulus) in an area behind the Conservatory, adjacent the Kroger Community Kitchen Garden. They planted 20 repurposed whisky barrels with hops rhizomes (creeping, underground stems) from their own brewery’s garden in Ashland. Though backyard gardeners typically rely on arbors or trellises for the bines to climb, the Rays constructed supports for the living exhibit at Lewis Ginter. It’s a nifty assemblage of heavy twine strung upward from each barrel, over a high central wire that runs perpendicular, and then down the opposite side to another barrel.

Three years later, hearty bines are climbing and thriving in the full sun. The soil, which is loamy and well-drained, is slightly acidic (6.7-6.9 pH). Soaker hoses or drip irrigation keep roots watered, and the plants become more drought tolerant after the first year. Harvesting of the organic hops typically occurs mid-August through September, when the hops are green and fragrant. With proper conditions and care, some varieties live 25 to 50 years.

More than 120 varieties of hops are available. Cascade hops have been most successful at Lewis Ginter Botanical Garden.

“Once people get educated about the beer they drink, they appreciate the process and artistry,” Ray said. “Maybe it will even inspire them to grow hops on a commercial scale, because we need more of that in Virginia.”

“Hops add bitterness, to balance the sweetness from the malt, as well as flavor and aroma,” said Mike Brandt, co-owner and brewmaster at Garden Grove Brewery & Urban Winery.

“But you don’t have to use hops to brew beer.” Obsessed with plants and the science of brewing, Brandt combines his passions at his Carytown operation.

“I like to use ingredients no one else has access to, so my beers aren’t the same.” Brandt said. He experiments with unique flavors in his beers—as well as select meads, ciders and  hybrids—by adding various herbs, fruits and spices. He raises the add-ins at his home’s downtown Richmond garden, which ensures the ingredients are fresh and produced in organic, eco-friendly ways.

Brandt’s craft beers include flavor-rich and aromatic ingredients, ranging from rosemary, lemon balm and mint to aronia berries, plums, blueberries and figs. Even spruce tips, inspired by George Washington’s home brews, find their way into some of Brandt’s brews.

This year after visiting Lewis Ginter Botanical Garden, Brandt contacted the staff with an intriguing offer. “I thought it would be a fun relationship if they grew some of the unique plants that brewers don’t usually get.” A partnership was formed, and Brandt looks forward to experimenting with the Garden’s upcoming harvest of pineapple sage.

“Brewing beer is no different than cooking because you envision the taste and experiment with flavors,” Brandt said. “I just try to keep myself entertained.”

Hops are a vigorous bine (not to be confused with vine), meaning it grows in a helix around a support – sometimes as much as 20 feet tall. It’s also dioecious with separate male and female plants. While the female plant produces flowers for brewing, it’s the male plant that pollinates them. Hops determine a beer’s characteristics, plus they help preserve the beverage and its foam.

This article first appeared in the “Richmond Times-Dispatch” in June 2018.

Lewis Ginter Botanical Garden offers year-round beauty on a historic property with more than 50 acres of spectacular gardens, dining and shopping. A classical domed Conservatory is the only one of its kind in the mid-Atlantic. More than a dozen themed gardens include a Children’s Garden, Rose Garden, Asian Valley and Cherry Tree Walk.