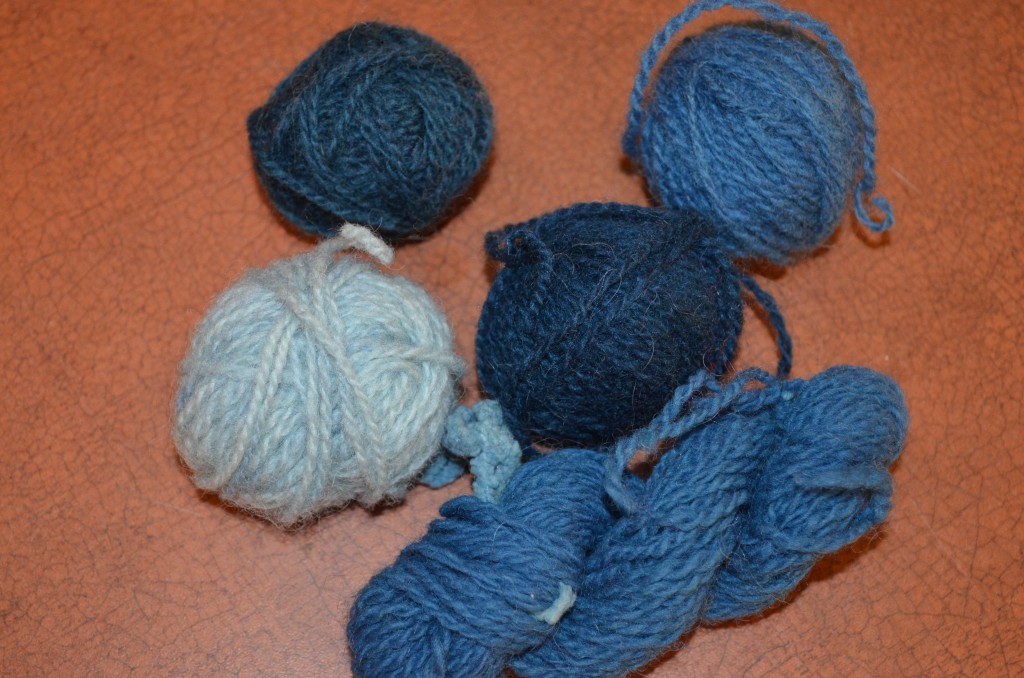 Blue dye from woe or indigo

A pivotal moment in the movie Braveheart, directed by Mel Gibson, is of the Scottish rushing into battle with their faces painted blue and white.  I always thought their face paint was a Hollywood move, with nothing to do with history, but I was wrong.  Mel Gibson’s blue face paint is a nod to the Pictish tradition of body-paint, as soldiers dyed their bodies blue in order to intimidate the enemy.  Even though Gibson’s painted face was at least 900 years out of date, there are records of the Scottish doing so up until the 5th Century.

Last week I had the opportunity to attend Painting Plants that Paint: Dye Plants for Botanical Artists, a new class offered at Lewis Ginter Botanical Garden.  The class combines botanical drawing with dyeing.  Students choose among the many flowers or plants that produce dye.  Guest speaker, Judith Towers, discussed craft dyes and dyeing, and students learned to prepare a solar dye bath.  Then we prepared a composition and painted these flowers and plants.  Celeste Johnston and Hazel Buys are both botanical and fiber artists, and they assisted students with the composition aspect.

The class was  full of energy, which I credit  to the instructors’ enthusiasm.  Judith has been dying since 1980 and is very knowledgeable and passionate about her work.  She says she hopes her enthusiasm will be contagious. 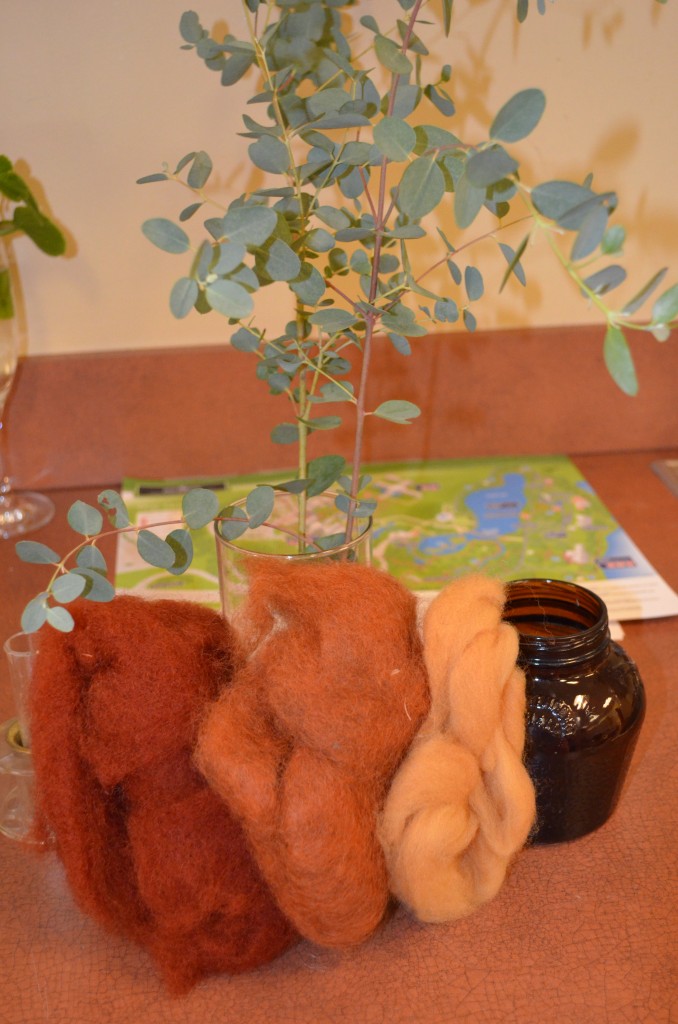 Eucalyptus and the 3 different dyes

She told us about how flowers and plants produce a variety of colors, and many surprised me.  For example, ecucalyputs,  a plant that can be found in the Children’s Garden, is green in color but produces a red, orange, or yellow dye.  The dyes can be different based on the different parts of the plant you use as well as the time of the season.  This plant surprised me the most because who would have guessed that a green plant could produce such opposite colors.

Celeste Johnston has a personal reason to why she started dyeing.  One day Celeste came home to her then boyfriend standing outside their house with a black lamb, which is one of her favorite animals.  She was estatic about the cute animal, and when she looked back to her boyfriend he was on one knee, and he proposed!  They named the lamb Blizzard, and later they got a white sheep named Zaza.  Celeste had some extra wool from the sheep, and so she decided to start dyeing it.

Once you know what you are doing, dyeing is very simple.  Here is the fabric before going into the mixture.  As you can see it is very white in color. 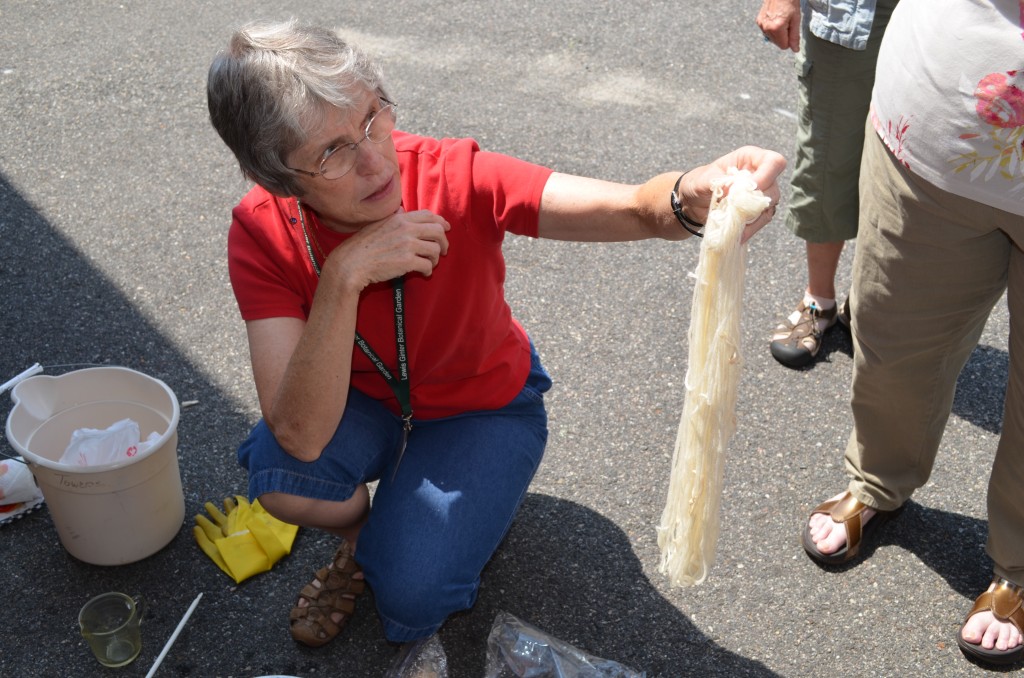 After 5 minutes, you can already see the fabric change to a nice yellow. 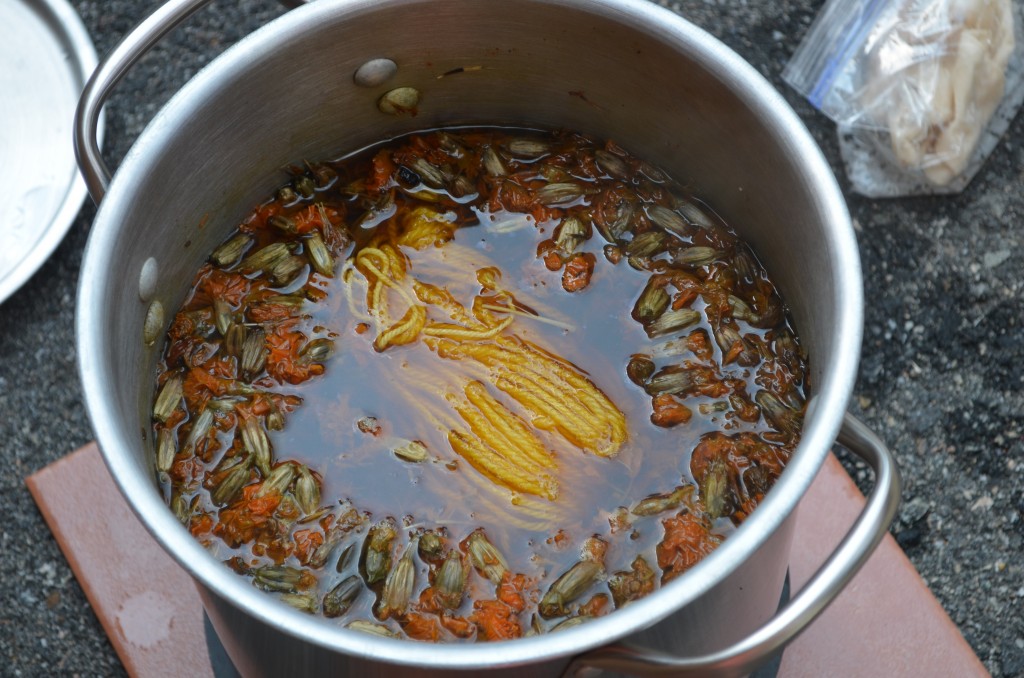 I love how this class shows you all the steps from beginning to end.  I even learned how to spin wool, which felt more like a game than work!  Judith brought a vest that she made, which I am in awe of.  She dyed the wool, spun it, and knitted it to create this beautiful clothing that is a work of art.  Judith told me that by dyeing your fabric, you feel more connected to the piece.  Seeing all the hardwork she put into, made me think of the history of my own clothes, but with industrialization, it is no longer a unique or special process  for many. 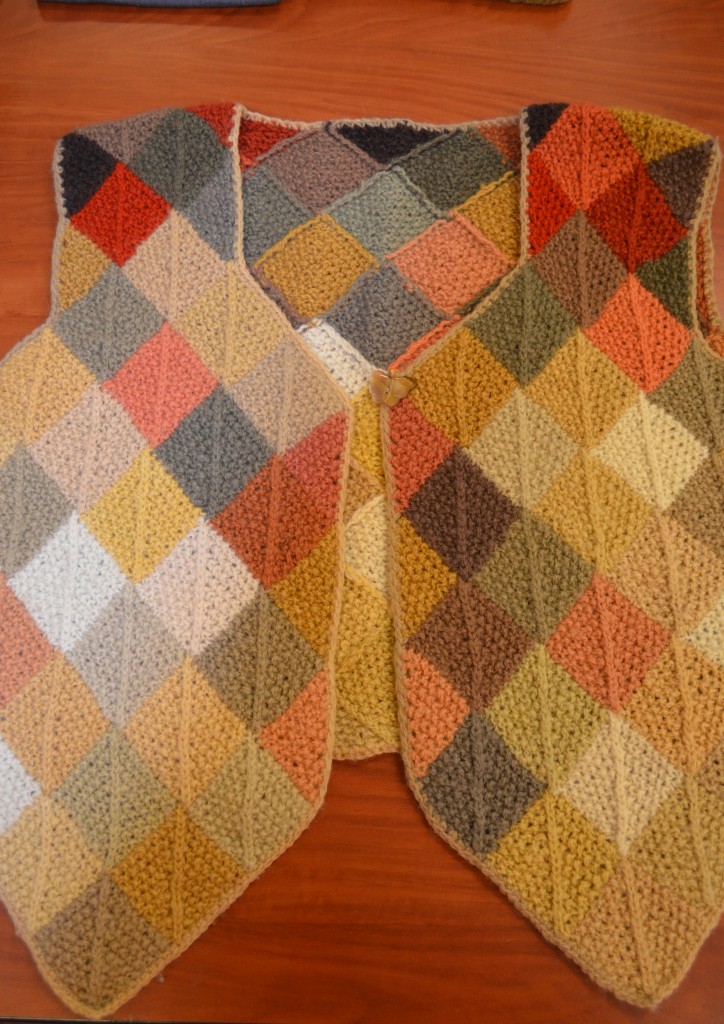 The class has two more sessions left on Wednesday August 15 and 22, from 9:30 am – 2 pm.  An interesting tidbit is that an instructor at Cornell University Plantations in Ithaca, NY is working with the three instructors to develop the course for Cornell!