We had a great blend of volunteers Saturday morning in the Lewis Ginter Community Kitchen Garden. A college alumni group joined several individual volunteers who signed up via HandsOn Greater Richmond, and the finishing touches were applied to the Fall crop of broccoli, cauliflower and cabbage.

Special thanks to Corey Humphrey, Manager of Leadership Programs for the Greater Richmond Chamber of Commerce, who led his team of alumni from The College of Wooster (Ohio) for a morning of service work. Saturday (9/17) was Scots in Service Day across the entire U.S. for College of Wooster alumni.  (Corey is also the son of Lewis Ginter Botanical Garden, Director of Education, Randee Humphrey, also pictured, with hat). 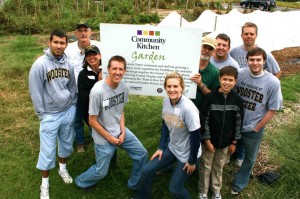 The Wooster alumni group with a couple of ringers. Corey was such an adept promoter he convinced two University of Richmond students (Vojin - front left, Geoff - front right) to don Wooster apparel for the photo.

Special thanks also to Leigh Dorris, a Capital One associate and repeat CKG volunteer, whose experience in the CKG put her in the position of team leader, supervising the completion of a wide variety of tasks.

We placed one-half of the cauliflower and broccoli under row covers in an effort to prevent insect damage. The resulting canopies evoke a sculptural effect, particularly dramatic on Saturday against a gray, late September weather front.

Speaking of the Community Kitchen Garden, we delivered 32 lbs of tomatoes to Feedmore’s Community Kitchen last week and another 112 lbs on Monday, which brings our total donation for the season to  8,819 lbs.  We have 1,181 lbs. left  to meet our 10,000-pound goal. Can you help? If you have surplus veggies from your own Garden, and would like us to deliver it to Meals on Wheels of Central Virginia & the Central Virginia Food Banks’ Community Kitchen please drop it off at the Hort Fort, which is the green building located next to the greenhouses, behind the Conservatory labeled HORTICULTURE. 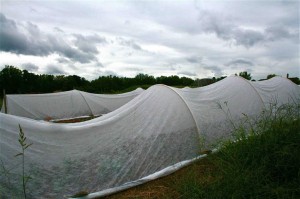 If we had obtained bright orange fabric we could be emulating a "wrap" project by the artist Christo.