Frog Blog: Frogs in the Conservatory

Have you ever walked through the Conservatory and heard melodic chirping or deep croaks that sounded like the grunts of a monkey? You might be surprised to know that those are the sounds of the frogs that live throughout the jewel of the Garden, our Conservatory! 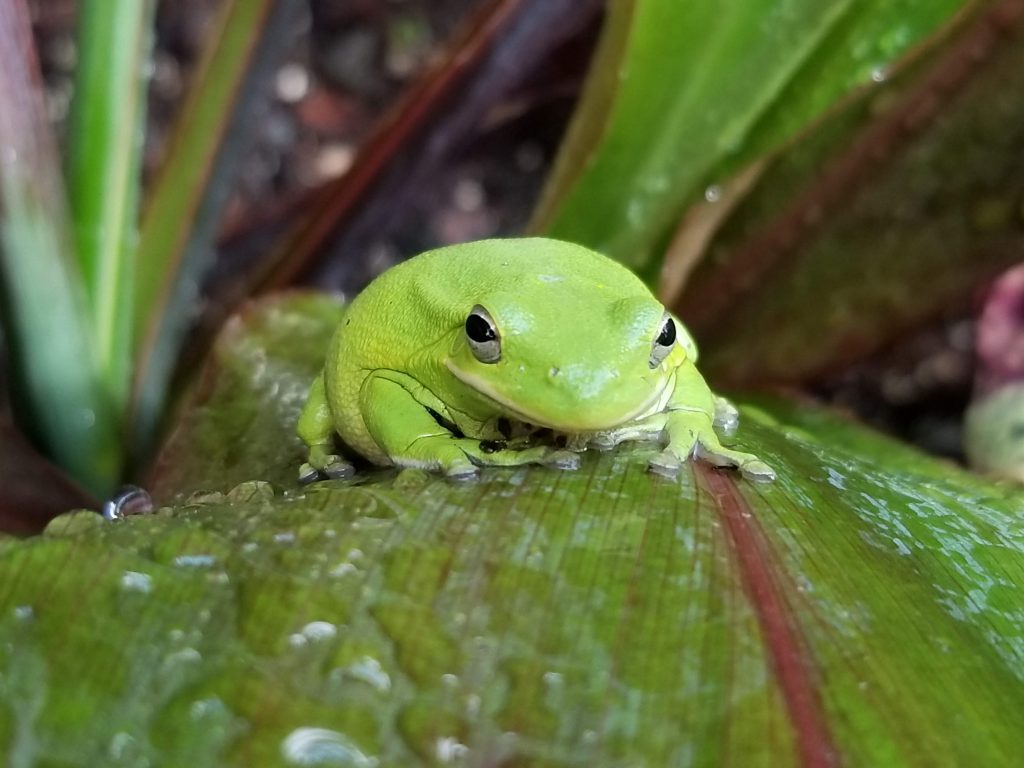 One of the many green treefrogs that you can find around the Conservatory. Image by Ryan Olsen.

The Conservatory Has Frogs? 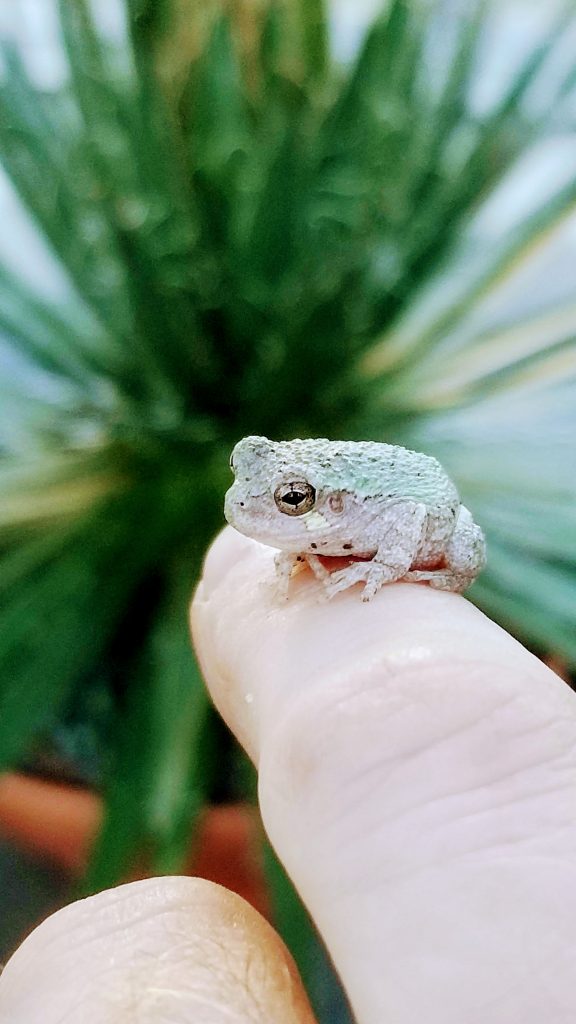 That’s right! Did you know that the Conservatory is home to five kinds of amphibians? During your visit, you may be able to spot green treefrogs (Hyla cinerea), gray treefrogs (Hyla versicolor), American bullfrogs (Lithobates catesbeianus), leopard frogs (Lithobates sphenocephalus utricularis), and American toads (Anaxyrus americanus americanus). Because they are most plentiful, you are most likely to spot green and gray treefrogs.

The Garden keeps the Conservatory at warm and humid temperatures because it is home to various tropical plants that need those conditions to thrive. The frogs are attracted to this kind of heat too, which draws them to the building. The temperatures of the Conservatory come in handy during the winter season in Virginia. The frogs gravitate towards the heat to survive the harsh winters during their hibernation period. After the wintertime, they begin to breed and lay their eggs. Luckily they have the perfect place! The Conservatory pools, located just outside the entrance are the breeding ground for the green and gray treefrogs in spring and summer.

What do the Frogs Do?

The frogs have a very important purpose in the Conservatory. They eat insects that come across their path and decrease the number of harmful bugs and pests that might be lurking. They even eat a beetle or two when they get the chance. Without their help, there would be a lot more bugs in the Conservatory, damaging the beautiful tropical plants and flowers on display. 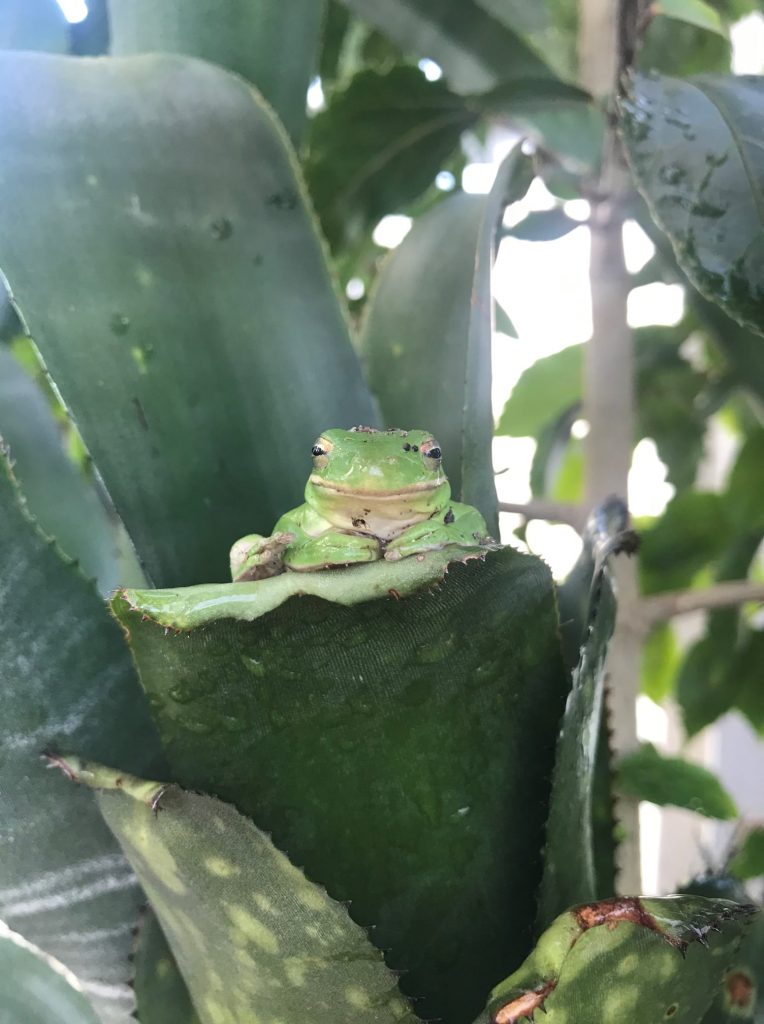 One of the perks of working at Lewis Ginter Botanical Garden is hanging out with the Conservatory frogs! Here’s one perched atop his bromeliad throne, captured by Gardener Michelle Chatham.

When they aren’t eating those annoying pests, the frogs are lounging around the Conservatory. Tree climbing is one of their preferred pastimes! When they aren’t stretching out their legs, they are lounging in bromeliads. Look closely, you can find frogs between the leaves of the Alcantarea imperialis ‘Malbec’ plant that is affectionately called the “Frog Hotel” by our horticulturists and gardeners!

When you work closely with frogs, sometimes it’s hard not to get attached. Lewis Ginter Botanical Garden horticulturist Ryan Olsen has an affection for one, in particular, Hagrid is a gray treefrog, whose favorite pastime is lounging around. This little guy likes to travel constantly from one end of the building to the other. He is very easy to spot among bromeliad leaves but you might have a hard time seeing him on bark or stone because he’s got great camouflage. I had the pleasure of seeing him during my visit to the Conservatory but I almost didn’t notice him! He blended in very well with the stone centerpiece that I had to do a double-take. 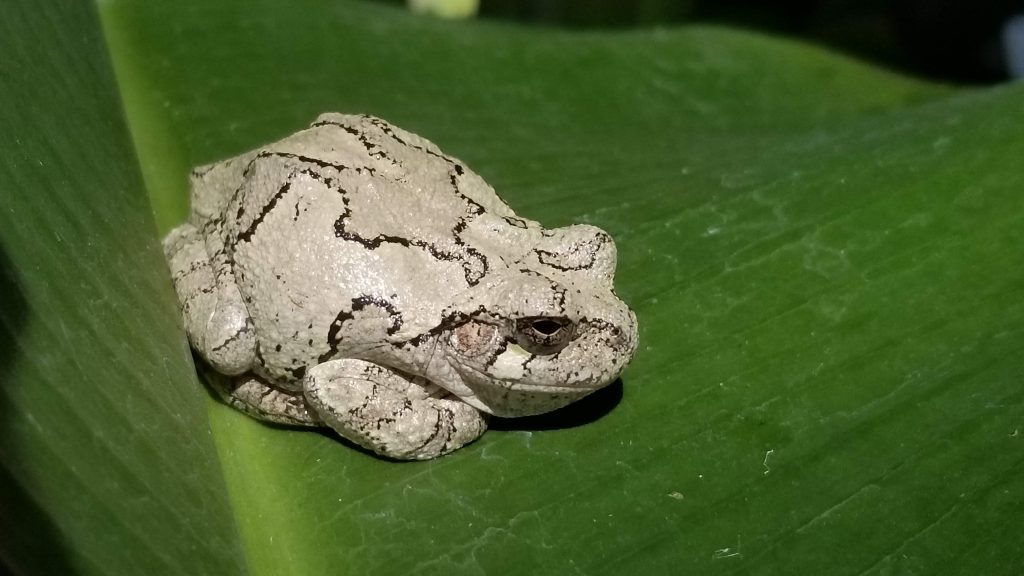 Hagrid the gray treefrog lounging in the Conservatory — look at those lines!

Ryan has many fun frog stories to share. For instance, the Conservatory has just one tropical tree frog that has traveled up and down the East Coast! The little frog originally spent its days basking in the Florida heat, hopping from one plant to the next. One day, the frog’s plant home, a Neoregelia ‘Green Eyes’, was uprooted onto a truck and brought all the way to New York! Eventually, his plant home found its way to Lewis Ginter Botanical Garden. The warm heat and humidity provided by the Conservatory make him feel like he’s right back home in Florida.

Get your advanced online tickets to visit the Garden to see, or hear, these little guys in the Conservatory. They even like to sing when it’s a rainy day! Try to visit early in the morning, when you can hear them chirping and croaking the loudest.  Starting today (April 30, 2021) we open at 9 a.m., just in time for the frog chorus. 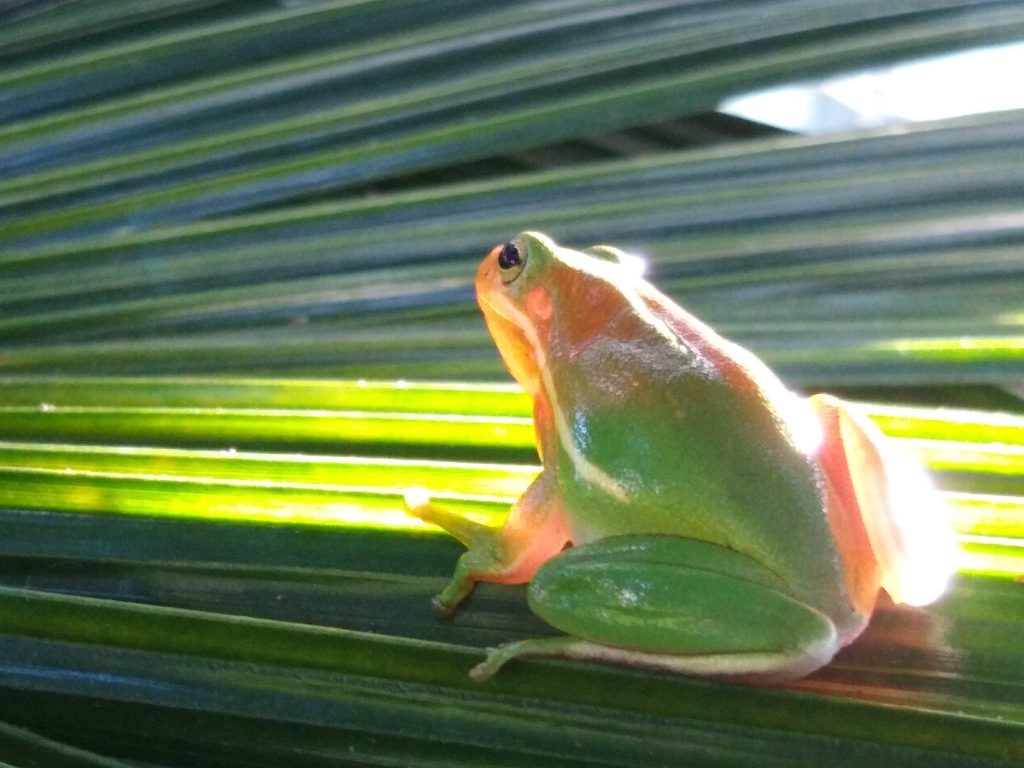 Frogs have so much personality! This one reminds us of Kermit.

Sierra Lasher is a public relations and marketing intern at Lewis Ginter Botanical Garden. She is excited to connect with lovers of the Garden and encourage new people to visit! Sierra is currently studying Communication at George Mason University. Sierra believes this internship will be a fun experience and an excellent start to her career.