Making a Home for Fairies at Lewis Ginter Botanical Garden

I just spoke with Tracy Kane, author of the Fairy House Series of books. She’ll be at Lewis Ginter Botanical Garden, April 29th  for our No Child Left Inside: Restoring Nature to Early Childhood symposium. I was very excited to speak with her because I’ve seen with my own children how com 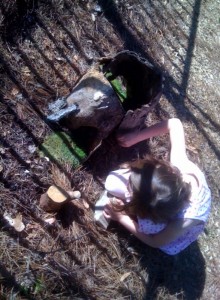 pletely enthralled they are with fairy houses and miniature worlds and I thought she might have some insight into what it is about fairy houses that is so special.

I think it is partly because the magic of nature is so easy to believe in. Watching a caterpillar turn into a butterfly or a tadpole turn into a frog is a magical experience.

[The fairy houses] can be simple rustic dwellings or be quite elaborate its pretty simple when you get kids back into nature it’s natural — within 10 minutes they’ve got something going. They’re intuitive to nature and you just watch the child come to life. 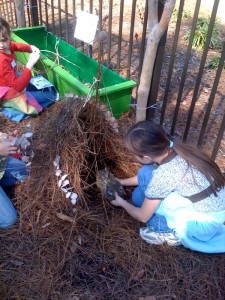 I’ve mentioned before the incredible positive impact of how being outside in nature affect my kids.  I became more educated about this topic and I made some changes in how I approach our back yard and how much TV I let my kids watch mostly  because  in preparing for this symposium,  I had a chance to serve on the symposium’s advisory committee and just by talking about the issues the committee members enlightened me to nature’s import role in the lives of children.  Still,  I was looking for some concrete examples of why it is important for children to have an opportunity to explore nature.  What is the logic behind it and why does it work?  I found some  great (but surprising) information on Tracy Kane website that explains it:

Recent news reports have suggested that kids are suffering from “nature-deficit disorder”.  Children are plagued by the estimated 44 hours per week that they spend watching TV and playing computer and video games according to research from the Kaiser Family Foundation. Some might argue that “nature-deficit disorder” is not just a problem for children, but is ever-present with adults, too.

Richard Louv, author of Last Child in the Woods, defines “nature-deficit disorder” as the cumulative effect of withdrawing nature from children’s experiences. Families too can show the symptoms — increased feelings of stress, trouble paying attention, and feelings of not being rooted in the world.
Building fairy houses, the latest outdoor craze, inspires appreciation and awareness of the environment through an activity that encourages year-round outdoor play. The tradition of building these environmentally sensitive, small dwellings to attract fairies and wood nymphs is generations old.

Getting back to the workshop here at Lewis Ginter, Tracy Kane will be part of  an event, Homespun Fun for Families, focused on teaching parents and kids easy fun outdoor activities they can do at home.  She’ll read from her  stories and discuss different types of fairy houses, then the kids will create a fairy house village out of some great natural materials we have been collecting here  at the Garden. 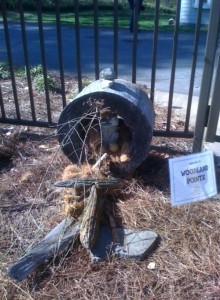 A fairy house, built by my son, in a hollow log with a luffa “flag”.

“There is a magical age — somewhere between 5 and 10”  Kane says,  “that they really  show their creative potential.” It’s not just girls either. I mentioned to  Kane, my son’s intense interest in building these houses too.  Boys, she says tend to focus on the  outside of the fairy house more (patios, bridges) girls focus on the inside, including soft stuffing,  putting acorn caps down or seashells as plates for fairy food (seeds, berries).  Very interesting! And she’s right, my son is very focused on the outside of his houses.  Perhaps the fairy house village project will inspire him to create some great infrastructure — a bridge perhaps, or a water tower!  As for me, I just can’t wait to see what these children are create as they play in nature as the sunsets, guided only by their imagination, and inspired by the little treasures that Mother Nature leaves in her wake — pine cones, seashells, walnut shells, luffa, seed pods and hollowed out logs.

Homespun Fun for Families is free to Garden members, symposium attendees and free with Garden Admission.  We just ask that you RSVP via email to registrar [at]lewisginter dot org