If you’ve ever dabbled in herb gardening, chances are you’ve seen little green worms munching away on your parsley, dill, or fennel. If that’s the case, then you’ve been visited by the larva of Eastern Black Swallowtails! These caterpillars may be found eating anything in the carrot family—including the herbs already mentioned, but also carrots themselves, and Queen Anne’s Lace.

Eastern Black Swallowtail butterflies are a delightfully easy caterpillar to raise at home; so long as you provide them with a safe spot and fresh host plant to eat, they will take care of the rest! 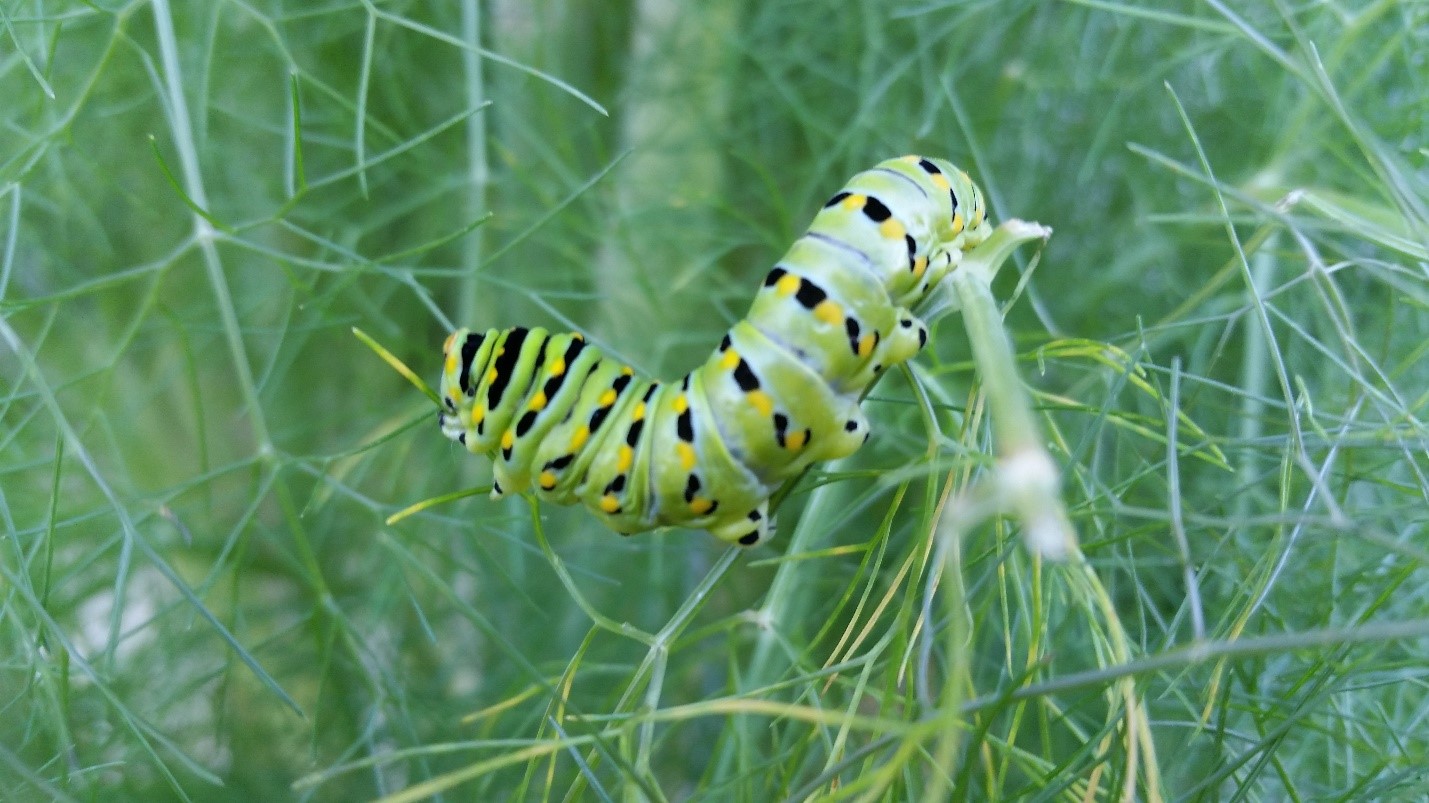 Like all caterpillars, these little guys go through five stages of development. The stages are called “instars.” The first few instars of the black swallowtail look very different from the later ones; the younger caterpillars camouflage themselves as bird poop, but when they get older they drop that act and begin to mimic the bad-tasting Monarch caterpillar instead. 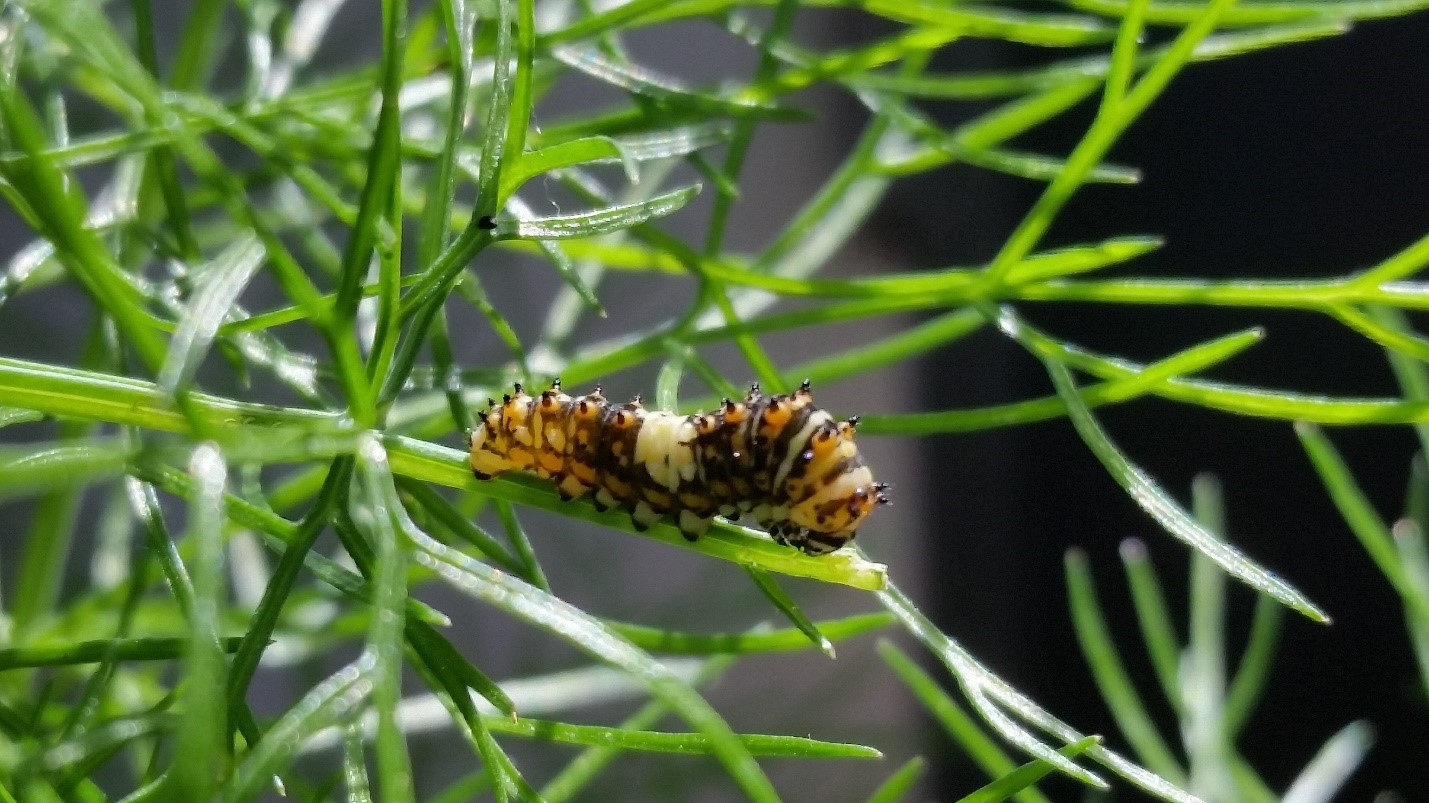 When the caterpillars reach the end of the fifth instar, they enter what we call the “wandering” phase. During this phase, the caterpillar tries to get as far away from its host plant as possible. This is so it can find a safe place to make its chrysalis. So if you’ve ever had caterpillars all disappear at once just when they were getting large, fear not! They probably “wandered” off to find somewhere to pupate. 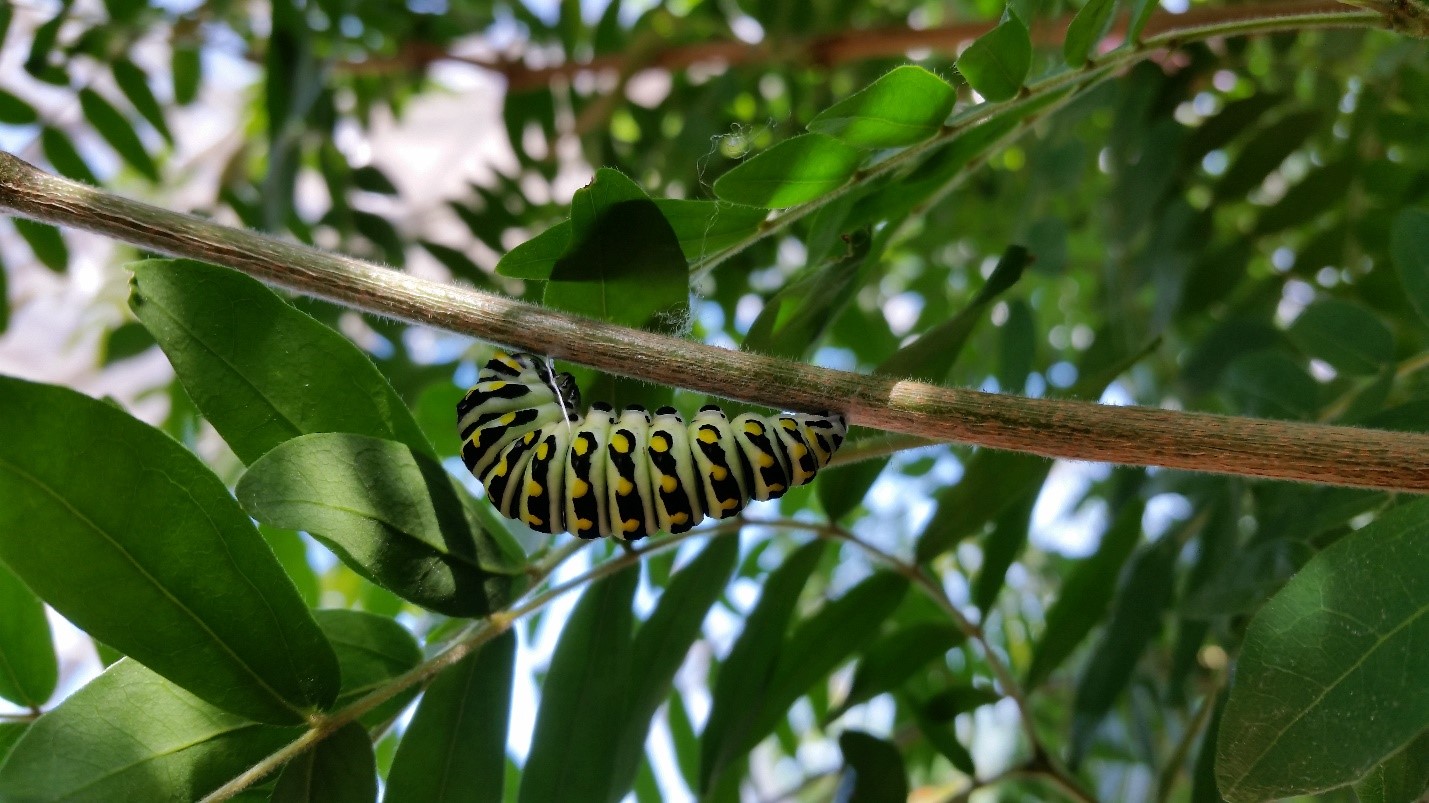 Eastern Black Swallowtail caterpillar in the shape of a ‘J’ preparing for its chrysalis.

When the caterpillar finds a good spot, it will hang in a “J” formation until it is ready to create its chrysalis. The caterpillar may hang like this for days before it actually pupates, but once it begins pupating, the process only takes a few minutes. Eastern Black Swallowtails, like many types of the swallowtail butterfly, may have green or brown pupa, depending on the surface they pupate on. 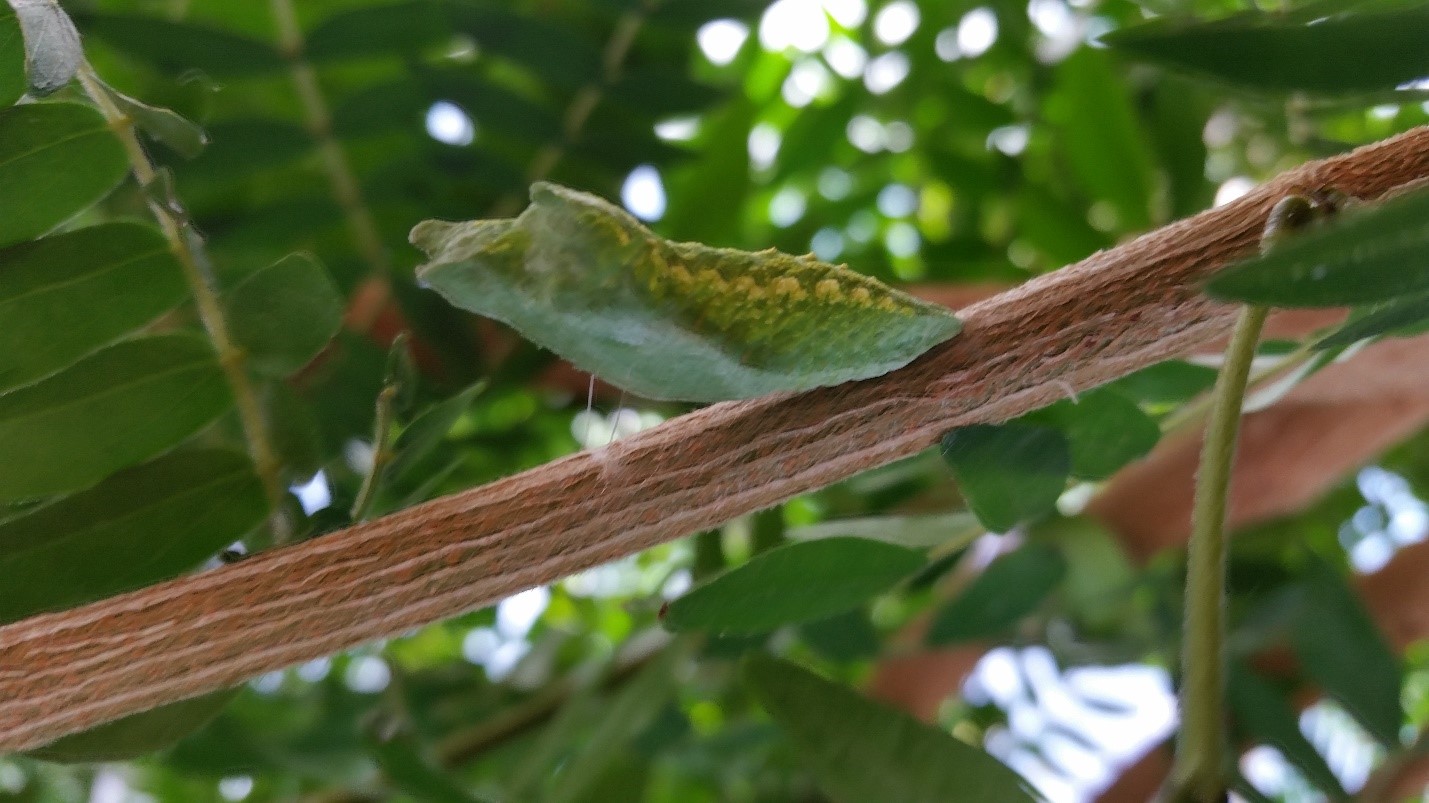 After a few weeks or so (quicker if it’s hot!) the butterfly will emerge. After a few hours of drying their wings, they are ready to fly! You can tell at this stage if you have a female or a male black swallowtail; males have a much more prominent row of yellow spots than females. You can now release your adult black swallowtails, and if you’re lucky, they will find mates and lay eggs. This allows you to start the process all over again! 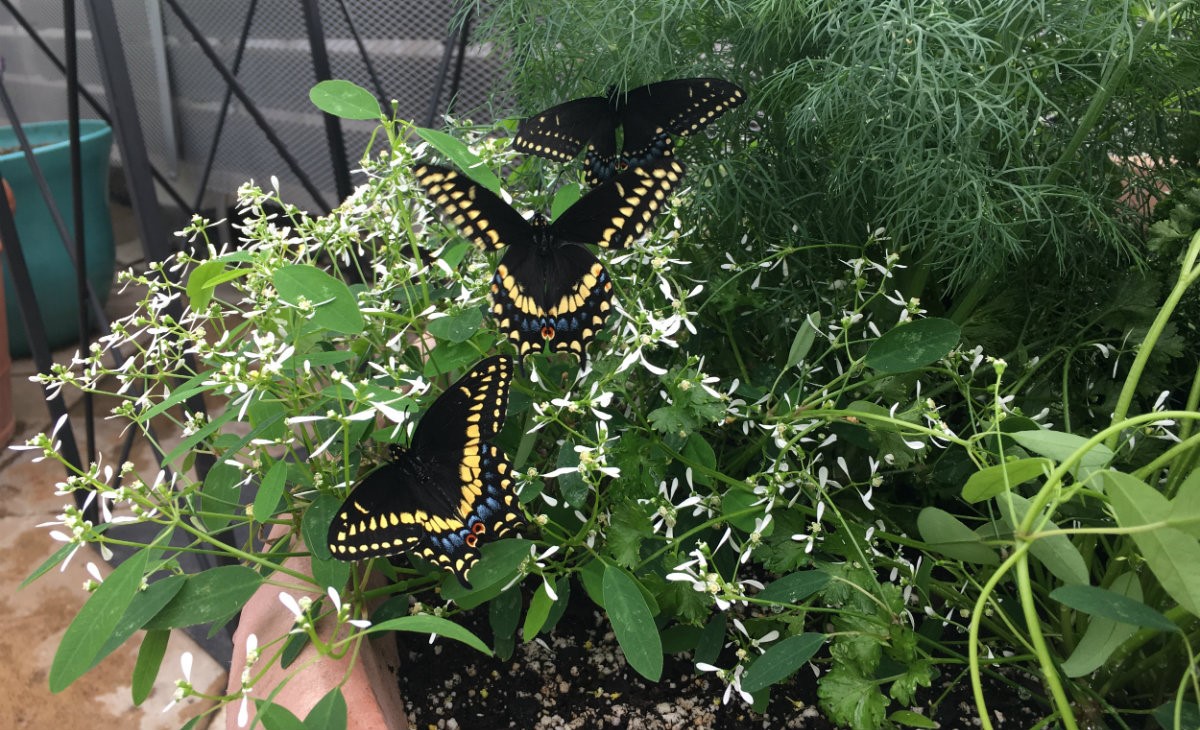 Make sure to stop by the M&T Bank Butterflies Live! exhibit where we are raising Eastern Black Swallowtails in our recently set up Caterpillar Nursery. You can come to view the caterpillars as they develop into adult butterflies. While you’re there, feel free to ask our staff any questions you might have about raising these beauties yourself!

The Art of Play promises moments of joy, whimsy and enchantment as Lewis Ginter comes alive with art that explores how playful interactions can create connection and conversation.

Learn More
Give Back

The earlier hours are designed to provide garden experiences away from the heat of the day. Early hours are also excellent times for photography, birdwatching and walking.

FREE admission to the Garden on this day includes Butterflies LIVE!, live music from the Happy Lucky Combo, a parade, and more. Open rain or shine! Sponsored by CarMax.