Life in the Dirt: Soil Health

Did you ever make a mud pie?

Was there a day when you played outside until you were utterly covered in dirt? At some point in your life, did you splash in a mud puddle? As a child, my little sister, Beth, loved to play in the dirt. Beth categorized dirt. There was soft dirt, rocky dirt, sparkle dirt, and so on. My mom gave Beth old spice shakers to help her process and sort the dirt. When it rained, it was mud pie time. Beth stirred in just the right amounts of rock dust, pebbles and soil in an old bowl. When the pie was done, Beth sometimes decorated the top with clovers and dandelions. My family has the fondest memories of watching Beth play with dirt, usually under the large beech tree in our backyard that had a bare spot underneath because of the swing that hung there. 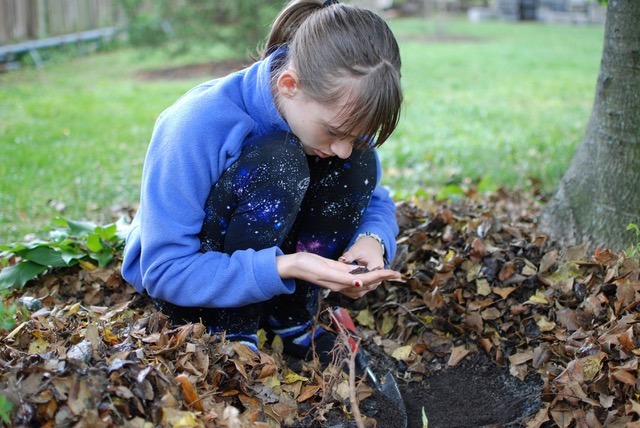 Searching for earthworms. Earthworms are a sign of good soil health.

Soil is not only fun for kids, but it is also vital to our planet’s ecosystem. All living things need soil. Plants, which provide us with food and medicine and trees grow in soil. Trees that grown in soil create oxygen and clean our air. Animals that we raise as livestock eat plants that need soil to grow. Healthy soil prevents flooding and filters water. When rain falls, water soaks into the soil. As water moves down through layers of earth, it filters out contaminants. This is why aquifers, storehouses of water beneath the ground, are one of the cleanest sources of natural water.

How Does Mother Nature Make Soil?

It begins with rocks. Over many years, water seeps into the cracks of rocks. It freezes and thaws repeatedly in the cracks and slowly expands them. Rain percolates down carrying small particles of rock and organic matter. Plant roots find a way to wiggle in, and they continue to slowly break the rocks into smaller pieces. As wind, ice and rain pass over rocks, some of the particles get blown or washed into creeks, streams and rivers. When the rock particles settle, they combine with organic matter like decaying leaves, fungi and bacteria to form soil. This natural process of forming soil can take centuries. People say that nature requires 500 or more years to create an inch of topsoil. Soil takes a long time to form, but it can be degraded quickly — sort of like my exercise and healthy eating habits! 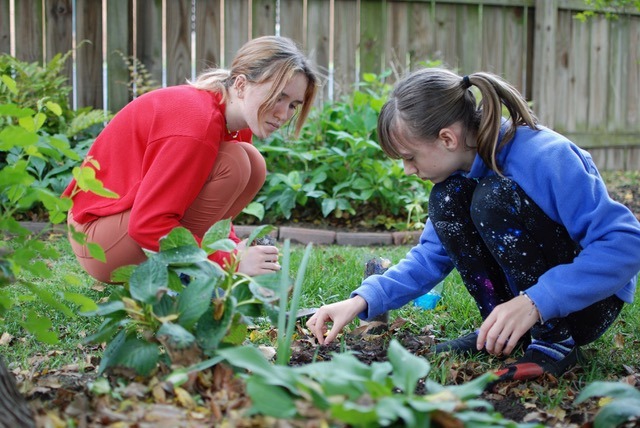 We have lost a lot of precious topsoil through erosion, deforestation, construction and over-farming. However, just as we can always start a healthier lifestyle, we can always start helping the environment. There are things we can do to help repair and care for our soil. Composting, mulching, planting cover crops, and not tilling are restorative practices that bring balance back to degraded soil. Planting native plants and trees in riparian buffers around waterways also help to prevent erosion and also keeps our water clean.

Soil Health: Soil Is Much More Than Dirt 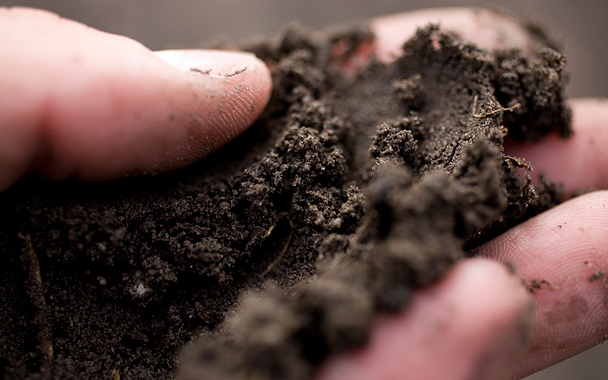 Mother Nature has a well-balanced, healthy recipe for soil. Soil is a mixture of about 45 percent mineral matter from broken-down rocks, about 25 percent water, about 25 percent air, and about 5 percent organic matter. The recipe varies depending on where the soil is located on the planet. It seems like you could just mix up a general balance of these ingredients into a fluffy, loamy concoction and make great soil, right? Well, I am embarrassed to say that I tried this, and I could not understand why none of my plants thrived in my “perfect” soil concoction. I had a lot of fun making my first sticky mud bath of a flowerbed, but I had a lot to learn.

We can’t reproduce in an afternoon what it took Mother Nature centuries to create. By working my wet, clay soil, I created large chunks of compacted soil that did not allow for water and air circulation. Although tilling does allow oxygen to enter the soil, my wet footprints compressed the air pockets. The soil’s surface hardened and prevented rain from entering. In addition to disturbing the soil structure, the ecosystem of beneficial soil organisms living in the soil was also thrown off balance when I mixed up my soil. Some think that no-till farming is the way to go. I am becoming more and more convinced after my experience. 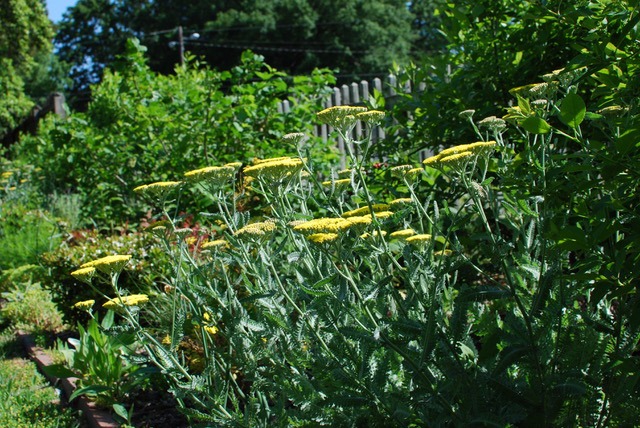 The more lush, natural look the author is achieving now that she is working with nature.

Things finally started to take a turn for me, and my garden, when I began to work with nature. I began to simply cover my garden beds with homemade compost, chopped leaves from my yard, and mulch. My plants began to look healthier. It was so much easier than mixing up my soil into a muddy mess. I began to trust and marvel in Mother Nature even more than I already did. I also followed her lead by planting more native plants, like black-eyed Susan (Rudbeckia hirta), American beautyberry (Callicarpa americana) and oakleaf hydrangeas (Hydrangea quercifolia). These plants do not require extra water and or fertilizer to thrive where they naturally grow. Another great thing about native plants is that they attract native pollinators and beneficial insects like praying mantis, ladybugs, butterflies and bees.

A world of creatures lives below our feet, and I’m not talking about the upside-down world in Stranger Things. There is an entire ecosystem of tiny organisms that keep soil healthy. Some, like beneficial bacteria, are too tiny for the human eye to see. There can be millions of tiny single-celled bacteria in one gram of soil. Soil fungi are plant-like cells that are essential for breaking down decomposing woody organic matter in the soil. Fungi form an underground network of thin, white fibers called mycelium that process and release nutrients. Millipedes, rollie pollies, grubs and earthworms are among the larger soil dwellers. A balanced biodiversity of these organisms is essential to soil health. While some soil organisms feed on decaying organic matter in the soil, others feed on each other, creating food webs below ground that connect to food webs above ground. Many birds, and other small animals, depend on soil-dwelling organisms for food. There are so many fascinating creatures that live in the soil. They all have important roles to play, but let’s take a look at one of the most well known, earthworms.

Covering your garden beds with homemade compost, chopped leaves from your yard, and mulch provides organic matter for earthworms to break down and improve you soil.

Let’s begin with the bad news about earthworms. Glaciers wiped out all the native species of earthworms in a large part of North America about 10,000 years ago. Starting in the 1600s, earthworms returned. They were probably transported in the ballast of ships, or in the soil of plants that settlers from Europe brought here. Nonnative worms continue to be introduced to North American ecosystems today. They may harm forests by eating organic debris on the forest floor too quickly. For example, some salamanders and beetles live in the leaf litter that carpets the forest floor. These creatures are deprived of their native habitat when hungry worms devour decaying material. Scientists, including ones at the Smithsonian Environmental Research Center, are studying the impact of earthworms on forests to truly understand their long-term effects.

Now, let’s talk about the good news about earthworms. Farmers and gardeners love them. Earthworms are much better tillers of soil than us giant humans can ever hope to be. When earthworms burrow through the soil, they gently loosen soil and make small tunnels that allow air and water to move through the earth. Particle by particle, worms mix soil layers. They make nutrients available to plants with their castings, also known as worm poop. Castings are a mixture of the remnants of organic matter and soil grains that have been digested in a worm’s gut. They are packed full of beneficial bacteria, enzymes and minerals. An abundance of nitrogen, phosphorous and potassium, as well as other nutrients, can also be found in worm castings. Additionally, castings help prevent plant disease and improve soil structure. It is said that it is there can be a million earthworms in one acre of land: they are truly capable of making a big difference. Still want to know more?  Penn State Extension office offers more information about soil health and the earthworm’s role in soil repair.

Up next: Learn all about different types of worms and how to build a wormery!

Mitra Bryant is a children’s program developer at Lewis Ginter Botanical Garden. She never ceases to be amazed by the wonders of nature and always feels inspired by the joy children experience while exploring the natural world.