Does this remind you of anything?  Could it be the flight path of a honeybee? a firefly? a ladybug?  I think I’ve seen these dashes drawn to depict the flight pattern of most insects with wings and I never gave much thought to why it’s drawn that way.  I guess I probably thought that insects with wings just have more fun than ones without wings.  After all, have you ever seen an insect at the end of those dashes that is drawn with a frown on its face?  I rest my case.

Today, I drove straight to the Lewis Ginter Botanical Garden.  I was scheduled to meet with a group of volunteers that works, weekly, to tend the plant beds of the Children’s Garden.  I entered through the front gate of the Robins Visitor Center and was headed straight down the path toward our meeting place when it struck me.  I remembered that I was passing near a garden feature that is installed just to my left and decided to pay it a visit.  I veered sharply left and headed straight there. 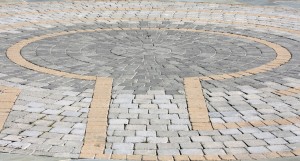 Embedded in the patio floor, was spread a garden labyrinth.  I could have just looked at it and then walked straight across it, because it has no walls and lies flush to the ground.  But I couldn’t resist it.  The non-branching maze invited me to ponder its curves and spiral its course, step-by-step-by-step, until I reached center.  I looked up from my circle, with eyes a little wider and a smirk on my face.  I absorbed the views of the panorama before me and observed the pathways that wind through the beds of the Rose Garden at Lewis Ginter.  I began to weave my way through them, noting the first blooms of the roses just beginning to open.   Remembering the joys of finding Easter eggs in the grass, I began to hunt for first blooms all over the Rose Garden.  I paused to sniff flowers that were close to the path and enjoyed the changes in fragrance from one blossom to another. 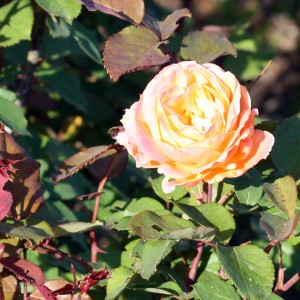 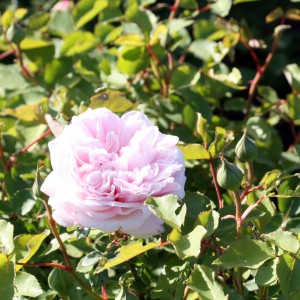 Now near the pond, I gazed across Lake Sydnor and spied the Children’s Garden. 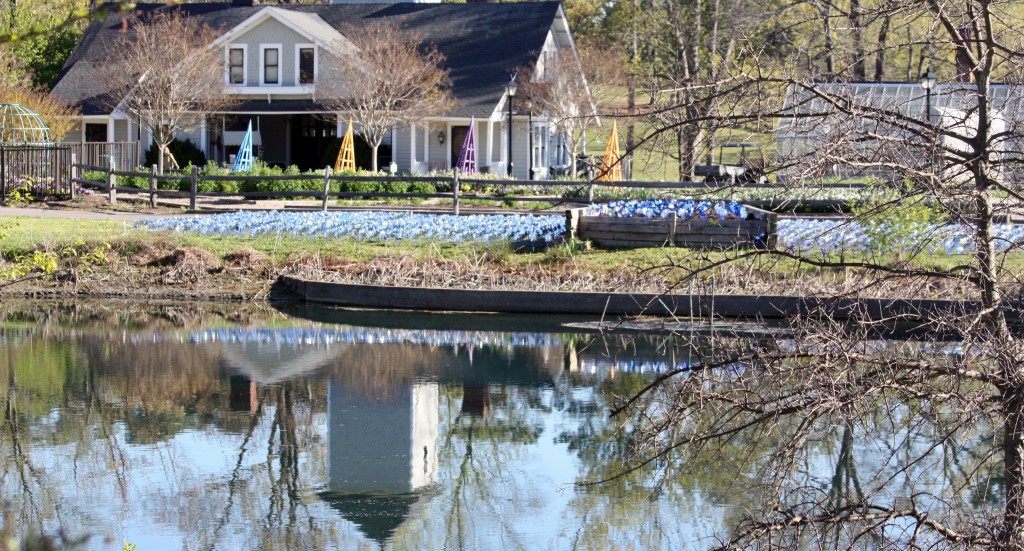 I had never noticed the Garden from this angle before and how it reflects so beautifully upon the water.  I recalled it was time to join the others.  I buzzed on over with a smile on my face, eager to take on whatever duty I would be assigned for the day.

There is much work to do in the Garden each week.  This week, we divided obedient plants, pulled out chickweed and mulched around the blooming daffodils.  While working, I thought about the bees that work the honey hives of Lewis Ginter.  Did you know that one worker bee will make about 1/12 of a teaspoon of honey in her entire lifetime?  Also, it takes between 40,000 and 80,000 bees working together to sustain just one colony.  That is quite a group effort!  I marvel at how many bees must work to make the honey I add to my morning coffee.  Certainly, honeybees are fascinating creatures.  There are many more fun facts to know about them, such as facts that explain why bees fly in circles.  We worked circles throughout the garden on Tuesday.  We divided and conquered our chores for the day and will come again prepared to work next week.  We are a small number of helpers; part of a much larger group of staff and volunteers that keep this place humming.  Every week is different and the chores keep us spinning.  The list of garden tasks grows on and on.  But I would not expect it to be any other way.  After all, the work of a honeybee is never quite done!

A day without a friend is like a pot without a single drop of honey left inside.