We’re in the early stage of spring avian migration, a time when birders’ pulses quicken in anticipation of finding colorful songbirds, shorebirds and raptors. Some migrants will stay and breed in our region and others will continue north as far as Canada’s boreal habitats. 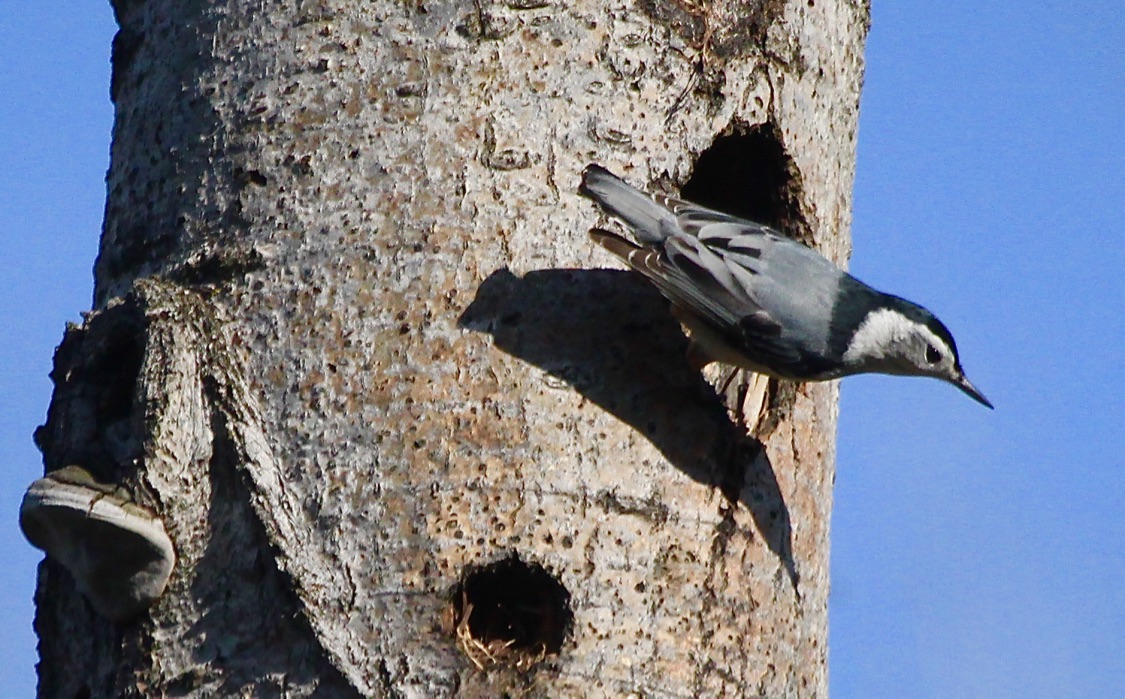 A White-breasted Nuthatch is not an uncommon sight at Lewis Ginter Botanical Garden.

On a late April morning, I headed to the Garden with binoculars and camera to search in earnest for early migrants. As expected, plenty of grackle, cardinal and Carolina wren songs filled the air at the onset. On the tallest pine trees, a pair of white-breasted nuthatches climbed along the rough bark. 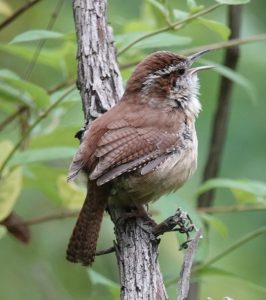 A Carolina Wren calls out while perching on a branch.

My route began by slowly circling the perimeter of the Garden, first behind the Community Garden, then along the pathway that skirts the Belmont golf course, and lastly into the Flagler Pavilion. Despite a cool and cloudy morning, birdlife in the Garden was lively with singing and chasing.

The first migrant that I spotted was a great-crested flycatcher near the bus parking area, calling its characteristic “Weep—weep”. Near the Carriage House, a gray catbird and blue-gray gnatcatcher dashed across my path and quickly disappeared into the bushes. At the edge of Syndor Lake, a common yellowthroat repeatedly chipped, but skulked through the ground cover and stayed out of sight.

Two other spring migrants appeared over the Syndor Lake: a pair of tree swallows, and, unexpectedly, a half dozen chimney swifts, both species foraging for insects. For a cool and cloudy morning, my tally of migrants was a good mix of early returning species. As spring’s leafy growth emerges, it’s often difficult to find birds in the foliage and you hear more bird chatter than actually spot them.

The coming three weeks in May should usher in a surge of returnees that will choose and defend territories, then begin nesting and parenting duties. The Garden will host many more migrants, and hopefully, we can expect to see colorful warblers that birders prize so much.

Jerry Uhlman, is a Garden volunteer and an avid birder who wrote the Flyways & Byways column for the Richmond Times-Dispatch for 20 years. He also penned the Birder’s Guide to Metropolitan Richmond guidebook (available in Lewis Ginter Garden Shop) and articles for national wildlife magazines. Watch for him in Boomer magazine, too!

Stroll through the gardens; enjoy live music, wine and beer, dining and shopping.

Dads and other caregivers deserve more than one day to feel special! That’s why we’ve created a whole weekend of fun.

FREE admission to the Garden on this day includes Butterflies LIVE!, live music from the Happy Lucky Combo, a parade, and more. Open rain or shine! Sponsored by CarMax.