East Meets West in the Garden

The ways in which Japanese gardens were introduced to America are as intriguing as the gardens themselves. The exchange of ideas began in the late 19th century and pivoted around wealth, world fairs and world power.
During this era of industrial revolution, international trade flourished. Previously isolated markets opened in the Far East. Travel abroad grew in popularity, especially among affluent Americans. They delighted in attending world expos, where diverse cultures intersected in a quest for enlightenment, enrichment and entertainment. 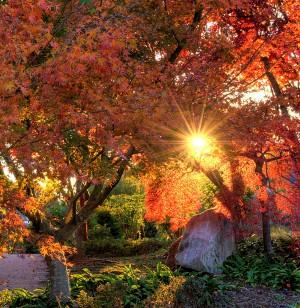 Japan, the Land of the Rising Sun, inspired this landscape at Lewis Ginter Botanical Garden. photo by Don Williamson Photography

In 1876, the Japanese government decided to capitalize on the cultural exchange for another reason: the prospect of global branding.
“At that time Japan was potentially a rival in the Pacific, and there was a strong anti-immigration movement,” said Dr. Kendall Brown, professor of Asian art history, California State University at Long Beach. “The Japanese government wanted to enhance the perception of their culture, so they brought Japanese gardens to the world fairs.”
The Asian-inspired gardens fascinated attendees – especially Americans who considered grandiose gardens as status symbols of prosperity and prestige. Typically the grounds of American estates mirrored Renaissance gardens, projecting magnificence though classic order, symmetry and formality. Stately boxwoods and manicured topiaries bordered lush expanses of lawn, while ornate fountains and statuary provided elaborate ornament.
Not so with Japan’s exhibition gardens. Arched bridges beckoned visitors to enter a world of natural beauty and reflection. Asymmetric balance united rhythm, pattern, space and form in simple harmony. The sound of waterfalls splashing upon stone awakened the senses, as did intoxicating fragrances of trailing wisteria and other exotic plants. Americans were amazed how the Japanese approached horticulture; they embraced nature instead of attempting to master it. 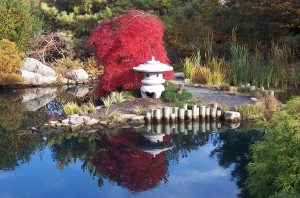 “The Japanese exhibits were counterpoint to European-style gardens,” Brown said. “They were peaceful, tranquil and rural.” Women, in particular, responded positively to the spirituality and serenity of the eastern-inspired landscapes.
“So began an adventuresome and experimental phase in American gardening,” said Frank Robinson, CEO of Lewis Ginter Botanical Garden. Japanese gardens were developed in a few public parks, but more often by wealthy landowners. Some also constructed conservatories to expand privately held plant collections.
“The climate of America’s East Coast is similar to that of eastern Asia, so it supported a successful interplay of similar plant species,” Robinson said. Over time the rich palettes of Asian transplants became staples in American gardens. Today it’s hard to imagine our landscapes without the Japanese maple, Yoshino cherry, crape myrtle, camellia, azalea—and the list goes on and on. 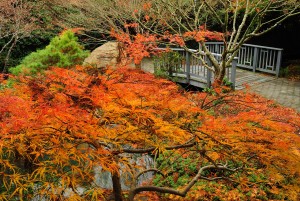 A Japanese Maple in orange. photo by Don Williamson Photography

Fortunately the beauty and sanctuary provided by Asian-inspired landscapes are no longer reserved for the upper class. In this region, the public can enjoy four-season beauty in the Japanese Garden at Maymont and the Asian Valley at Lewis Ginter Botanical Garden.
_____
Local History
Richmonders can thank two prominent landowners for the region’s first Asian-inspired gardens. C.F. Sauer Sr., founder of the nationally recognized spice and extract company of the same name, planted Japanese Gardens in the 1920s along the 4300 block of Monument Avenue. Though Sauer’s gardens no longer exist, historical accounts suggest they were resplendent.  Sauer’s Gardens, the neighborhood, lives on as a tribute to them, at this same location.  James and Sallie Dooley, renowned financiers and owners of the Maymont estate, also developed a splendid Japanese Garden whose centennial is being celebrated this year.
____
Upcoming Book Release
“Quiet Beauty: The Japanese Gardens of North America,” authored by Dr. Kendall Brown, will be released in March 2013. The Japanese Garden at Maymont is one of the 26 featured gardens.

Editor’s Note: This article first published in the Richmond Times-Dispatch on November 18, 2012