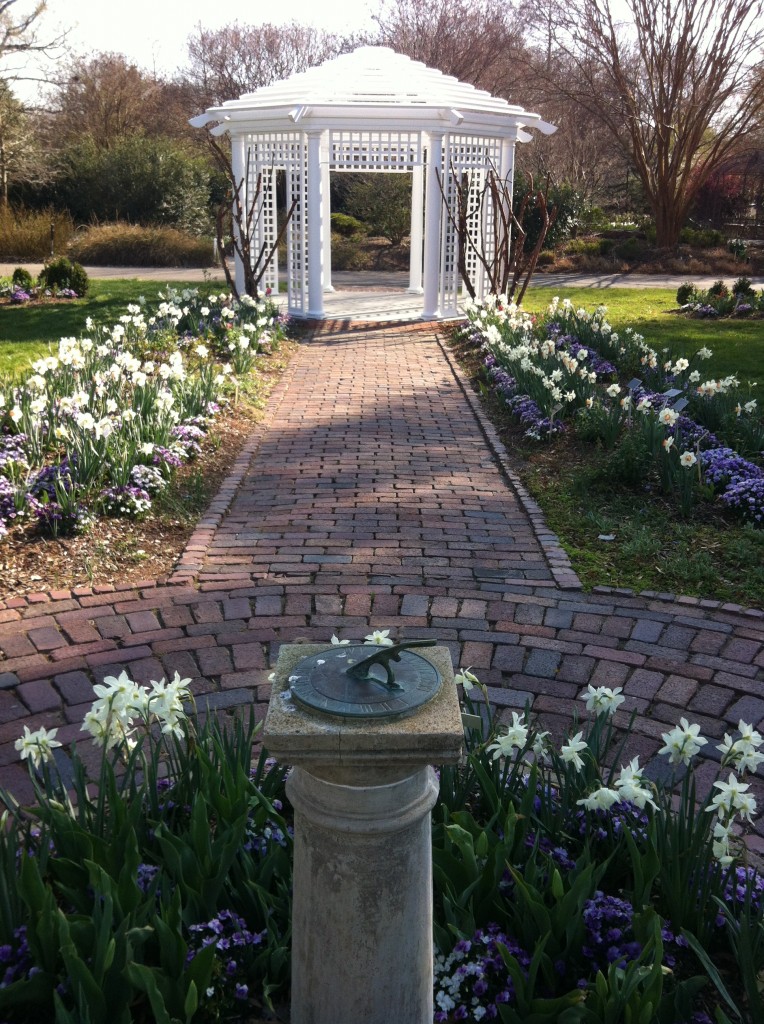 Lewis Ginter Botanical Garden’s most historic garden is getting a “summer house” and new arbors.  The formal beds in front of Bloemendaal House were originally planted by Grace Arents (Lewis Ginter’s niece, and the founder of our Garden) in 1914.  In fact, we call it the Grace Arents Garden on her behalf.  In 1991 the Grace Arents Garden was restored by the Garden Club of Virginia to create historically accurate plantings and to recreate its original look.   A large part of the Garden Club of Virginia’s mission is restoring historic gardens and landscapes in Virginia.

We have a good relationship with the Garden Club of Virginia, so 20 years after the original restoration,  when the Grace Arents’  “summer house” and wooden garden arches we starting to show their age, we were thrilled when the  Garden Club of Virginia said that they could help.  Not only would we be able to take the wood structures back to their original look to be more historically correct, but we’d be able to replace them with long-lasting Spanish cedar.  Some of the changes you’ll notice the next time you visit the Grace Arents Garden will be that we’ve pruned back the  Lady Banks rose (Rosa banksiae) that covered the top of the former gazebo or summer house. 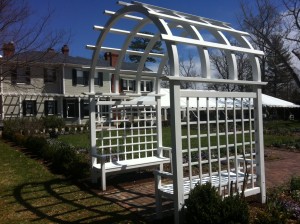 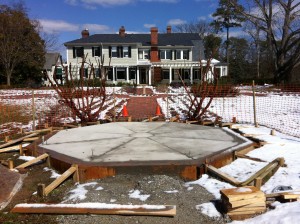 DURING Construction: The new concrete pad that formed the base for the new summer house in front of Bloemendaal House in the Grace Arents Garden was moved two feet to help protect the Lady Banks rose.

Elizabeth Fogel, Senior Horticulturist, who is the gardener for the Grace Arents Garden says not to worry, the rose will look better than ever in no time.

“It really was very long overdue for some serious pruning.  Hopefully it will ultimately be a benefit rather than a detriment. … This gives it a chance to start with new growth, which should make it more attractive as well. Lady Banks is such a vigorous grower, I think we’ll all be surprised by how quickly it re-covers the gazebo.  Typically it blooms in late spring — just one time, unlike other roses unlike other roses that bloom all summer.”

We  moved the cement base for the summer house by about two feet to give the roots of the Lady Banks rose more room to grow — yet another reason that this project will help the rose in the long run.

Also, you’ll notice the new structures really offer a signature flair to the Garden. They are strikingly beautiful, hand-crafted from the best wood — Spanish cedar,  known for its longevity. All the pieces are custom made, and arrived like a puzzle in a box and if you check out the photos below, you’ll see it came together quite perfectly.  The doorways that used to be open on the sides of the summer house will now be windows, so you won’t be able to walk through the sides anymore.  This is how it looked during Grace Arent’s time. 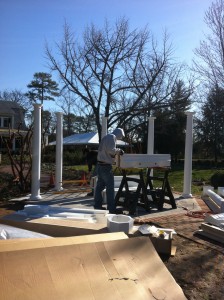 During: a work in progress, columns going up on the summer house.

During Construction: it’s all coming together!

“The great thing about the renovation is that it not only preserves the Grace Arents Garden’s history, but more closely resemble the original structures from Grace Arent’s time.”  The garden, and the structures date back to 1914.

“It’s great that it can meet both functions important to the garden — for both daily visitors and special events like weddings. It’s  really going to be such an asset for any event to have this special space. ”  Speaking of events, a perfect time to really enjoy the new summer house will be Heritage Weekend — April 13-14.  If you can’t make it Heritage Weekend, another great chance to view it will be during Historic Garden Week in Virginia.  We’ll be open late on Wednesday, April 24 from 5 – 9 p.m. with music, wine tastings & tours of Historic Bloemendaal House.  Seems fitting to enjoy these new structures then — the proceeds from Historic Garden Week help the Garden Club of Virginia fund this important projects like this one. 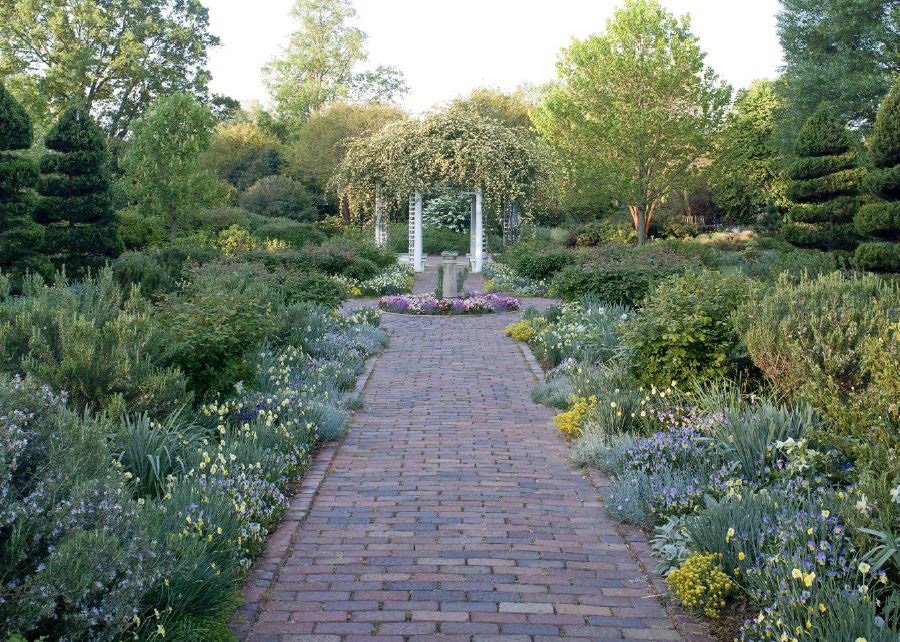 BEFORE: The Lady Banks Rose atop the summer house in the Grace Arents Garden. photo by Roger Foley

Architect Will Rieley of Rieley & Associates designed the new wooden structures.  They were crafted by Wilcox Woodworks of Manassas. 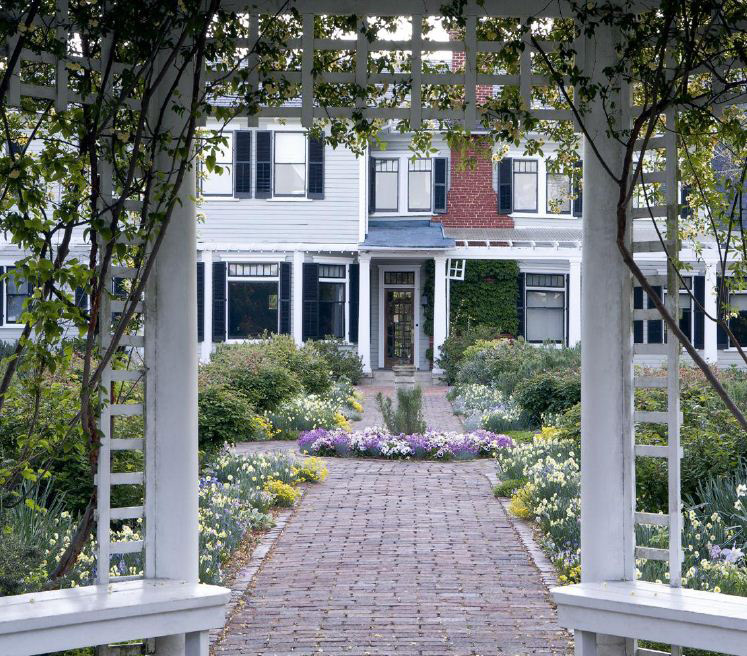 BEFORE: The view from the summer house towards Bloemendaal House. Photo by Roger Foley