We are thrilled to announce that Lewis Ginter Botanical Garden will serve as the start venue for Richmond 2015‘s elite men’s and elite women’s team time trial events on September 20, 2015 during the 2015 UCI Road World Championships. The Garden’s involvement is a natural fit.  As you have likely read here before,  the Garden has  rich ties to cycling history.  Historic Bloemendaal House was originally the Lakeside Wheel Club, one of the nation’s first “wheel” or bicycle clubs and the epicenter of early cycling history in Richmond.

We are proud to celebrate cycling and Richmond 2015 at Lewis Ginter Botanical Garden. In honor of  the race we welcome you for these special events:

Saturday, now through Sunday, September 27, 2015:  From Bicycle Club to Botanical Garden Exhibit about early cycling history in Richmond. Historic Bloemendaal House. Eight panels address different topics, including “The Cycling Craze at the Turn of the Century,” “Women and Fashion in the Bicycle Boom,” and “The Heyday of the Lakeside Wheel Club.” Included with Garden admission.

Monday, September 21 through Friday, September 25, 2015: The Garden will have extended hours and live music with dining, beer and wine available for purchase. Included with Garden admission. 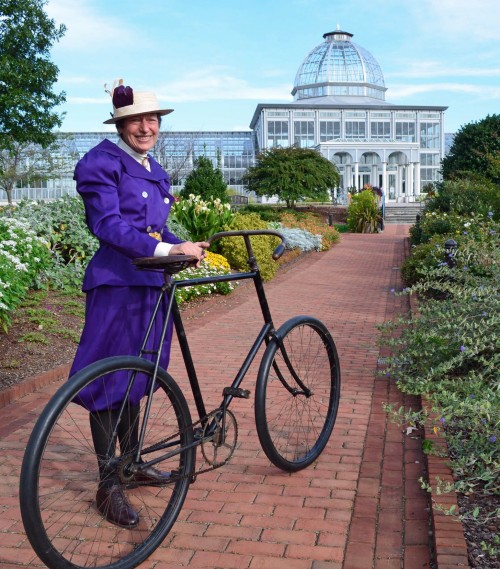 Garden volunteer Sherry Giese wears an 1890s-inspired bike outfit and guides a vintage bicycle from the same era. The costume was sewn from a historical pattern by Garden volunteers Mariette Norbom & Betty Woo.