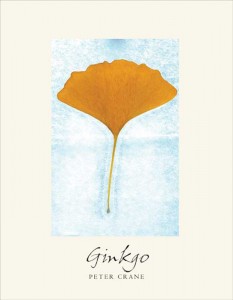 We recently welcomed a distinguished guest to the garden: Sir Peter Crane, author of a new book called Ginkgo, the Tree that Time Forgot, Yale University Press, 2013.  He was here to visit, among other things, our ginkgo tree which we believe is over one hundred years old and likely was planted by Grace Arents, our founder and benefactor. And yes, we have Ginkgos, the Tree that Time Forgot in our library collection.
Sir Peter is the Dean of the School of Forestry and Environmental Studies at Yale University. Previously he was on the faculty at the University of Chicago, and prior to that appointment, was the Director of the  Royal Botanic Gardens at Kew, London.  We imagined that Sir Peter would enjoy seeing samples of our Descubes botanical drawings during his visit, and we were correct. He not only enjoyed the drawings but was interested in learning more about our mysterious artist Alexandre Descubes. 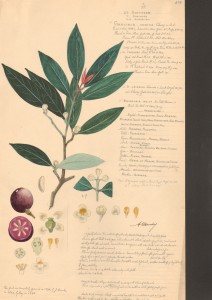 We do not know many details of Descubes’ life and we do not know why he created thousands of detailed pencil and watercolor drawings of mostly South Asian native plants. (Note: the Garden owns 2,486 drawings.)  What we do know: Descubes was a cartographer who lived and worked in India between the years 1854 and 1919. His birth and death dates are unconfirmed. His drawings indicate a precise knowledge of botanical anatomy and make reference to many scholarly publications of his day. Some of the drawings are stamped with the official stamp of the Imperial Institute in London. We know that Descubes had access to the multi-volume Flora of British India authored by Joseph D. Hooker. Many Descubes drawing are inscribed with the volume and page number of the depicted plant’s entry in the Hooker Flora. Hooker was the Director of Kew Garden, and we have always wondered if there isn’t a connection between Kew Garden, Hooker, and our man Descubes. You can understand why we get excited when Sir Peter Crane, formerly of Kew Garden, shows interest in our intriguing artist and his work. Many of the Descubes drawings are on display in the Garden Café, and a selection are often on display in the Lora Robins Library. Take a look and see if you too don’t become enthralled by Descubes and his prodigious collection.  Stay tuned – we’re hoping Sir Peter Crane and his network of worldly botanical contacts may help us unravel more of the Descubes story.