Fungi—some forms have existed millions of years!—originally were classified as plants. But they lack chlorophyll and other basic plant characteristics, so today, they reign over their own realm: Kingdom Fungi.

Your grocery store is stocked with fungi, from edible mushrooms to beer, wine and cheese that are fermented from yeast. The pharmacy also has items produced from Kingdom Fungi: the common antibiotics penicillin and tetracycline are manufactured from molds, as are cholesterol-fighting statins.

Fungi enzymes are used with biotechnology and the making of textiles, paper and more. 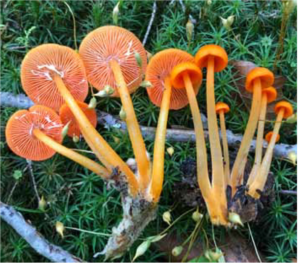 Parasitic fungi—mildew, rusts, scabs and cankers—are not as welcome. In humans, they cause athlete’s foot, ringworm and thrush. And for farmers, fungi cause crop diseases and monetary losses.

Mycology is the branch of biology that studies Kingdom Fungi, which are found in just about any habitat, though most live on land. Fungi’s kin range from single-cell, microscopic yeasts to complex, multi-cell mushrooms, molds, lichens and tree brackets.

Fungi act as parasites or decomposers when breaking down and digesting organic matter. They later release nutrients back into the ecosystem, and history (not to mention biology) repeats itself.

No carbon dioxide for fungi. Like humans, they prefer oxygen! And the world’s deadliest fungus may be the death cup mushroom (Amanita phalloides), a poisonous resident of Europe. If you plan to go foraging for fungi, make sure to research different types to avoid picking something poisonous.

Where can I find natural growing Kingdom Fungi?

See fungi at Lewis Ginter Botanical Garden along the Woodland Walk and in shady areas. For more about other native plants and trees, visit lewisginter.org.

This article was originally published in Discover Richmond.

The Garden’s plant sales are among the largest in the region with more than 40 vendors selling plants ranging from well-known favorites to rare exotics and other garden-related items. Plus, join us for live music, a festive atmosphere and a chance to get all your gardening questions answered.

The Garden’s celebration of spring! A parade of blooms unfurls as the weather warms: daffodils, tulips, peonies, roses and many more.

Events
The Art of Play

The Art of Play promises moments of joy, whimsy and enchantment as the Garden comes alive with art that explores how playful interactions can create connection and conversation.

Pianos in Bloom is a week-long celebration featuring grand pianos outdoors among flowers during peak bloom time at Lewis Ginter Botanical Garden. Pianos in Bloom is just one of several National Public Gardens activities for the whole family.

See hundreds of daylilies at their finest in a whole spectrum of shapes and colors — on display and on sale — at the Richmond Daylily Society Show and Sale.

Relax on Thursday evenings throughout the summer at Flowers After 5. Stroll through the gardens; enjoy live music, wine and beer, dining and shopping.