Nature Camp Fun at the Garden 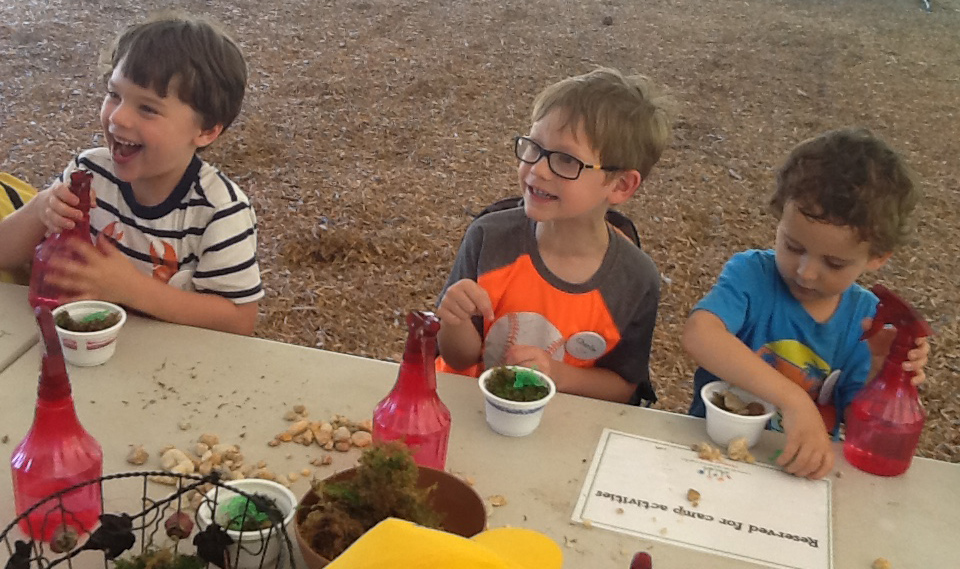 Every summer, Lewis Ginter Botanical Garden hosts several different day nature camps for all age groups. Campers can go on a Garden Safari, a Wild about Bugs adventure, Nature Expeditions, or to see what’s growing in Mr. McGregor’s Garden. New this summer for our Nature Connects: Art with LEGO Bricks exhibit, we have Stop Motion Animation and Mosaics: Art in Nature. 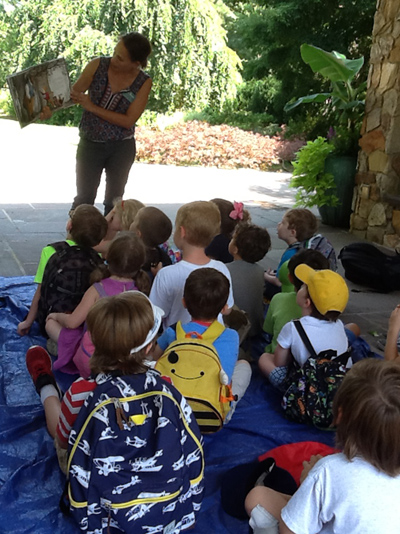 Right before story time, one of the campers asked me, “What are you doing here?” I told him, “I wanted to come to camp, too.” He smiled at me — my very own welcoming crew.

As a child, I missed out because I never went to camp. I may be a senior in college, but I was determined to live my camp dream. So last week, I set off to shadow Bricks and Sticks, a day camp for 4 and 5 year-olds. Bricks and Sticks is organized by a series of clues from the Earth Elf, who leads campers to different LEGO brick sculptures around the Garden. Throughout, campers get to play nature-inspired games and use natural materials like leaves, flowers, and sticks to create artwork.

All Aboard to Nature Camp

When I arrived at camp on Thursday, I found my fellow campers under at Flagler Pavilion, where they all sat on a blue tarp in shade for story time. I sat down nearby and listened to Children’s Garden educator Mitra Bryant read “Hector Fox and the Giant Quest.” The kids were really into the story…except when a pesky ant came around. One child would point to the ant as it got closer, and then they would all start whispering to each other about it. Bryant found it to be a teachable moment. She swept the ant away from the tarp gently saying, “We don’t want to kill insects because we’re in their world.”

At the end of the story, Bryant found a note from the Earth Elf. The campers — me included — were transfixed when she read it aloud:

This animal is cute and quick as can be // Another is smart — more clever than you and me. // Together they balance nature, as we shall see // What two animals could they be?

“A rabbit,” one boy shouted. “A rabbit and a fox,” said another one. “That’s right!” Mitra said, sweeping the campers around the corner to see the fox and rabbit LEGO brick sculpture. One of the campers found another clue from the Earth Elf, which explained a game involving pretend foxes and rabbits.

Here is your challenge. One of your adult helpers will be the fox. The rest of you are rabbits. Try to jump in  your rabbit holes (hula hoops) before the fox can get you. Only three rabbits are allowed in a hole. Happy camping, the Earth Elf. 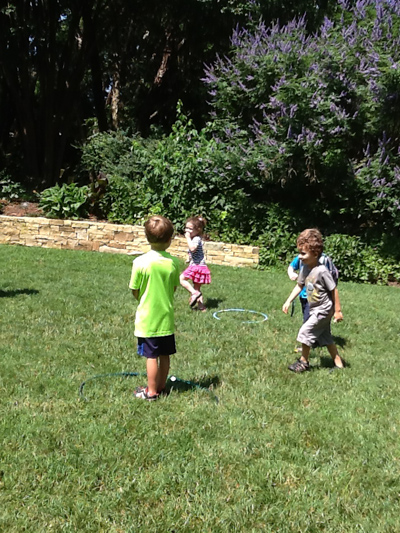 The campers  as rabbits, busy running from the fox!

I stood under a shady tree and watched as the campers dipped and dodged across the Flagler Garden lawn, diving into hula hoops and avoiding the fox who chased them. One camper who stood under the tree with me to watch said, “Those are some funny rabbits.” He was grinning ear to ear, and I smiled back at him. “They are pretty funny, aren’t they?” I said.

Have No Fear, the Bees are Near

On our way to learn more about bees at the Garden’s new apiary, we decided to be adventurous and cross the “babbling brook” over the waterfall in Asian Valley. We all felt brave when we got to the other side, and we celebrated by hiking up through the grass to the Conservatory. Before going around to the apiary, located in the Community Kitchen Garden, Bryant explained to the campers that there’s no reason to be afraid of bees. We even got to practice our waggle dance, which is what honey bees do to let other bees in the hive know where to find food.

Left: Campers took a break to watch fish in a pond on the way to the “babbling brook.” Middle: Bryant prepared us to have fun and be careful before we crossed over the cascade. Right: The hill from the Cochrane Rose Garden to the Conservatory is huge, but all the campers made it to the top.

When we got to the apiary, we all said together, “Hello bees, thank you for pollinating flowers so that we can have more flowers and fruits and vegetables.” I stood back and watched the other campers as they stood close — but not too close — to the hives and looked for bees doing a waggle dance. When it was time to go, we all said, “Goodbye bees, thanks for letting us watch you.”

We meandered through the Community Kitchen Garden looking for more bees, and one camper exclaimed, “I saw a big bee, and two little bees!” When I was their age, I was terrified of bees. It was awesome to see that Bryant was teaching them what I know now: bees are incredibly important, and we should love them.

Left: Campers practicing their waggle dance before visiting the bees. Middle: The children were fascinated by the apiary, and even if they were a little scared, they didn’t let it show. Right: Here’s one of the campers in the middle of saying “Goodbye bees,” as the others went to find more bees in the Community Kitchen Garden.

Thanks for the Adventure

Soon after our apiary adventure, I had to say goodbye to the other campers. It was already time to go home! My day at nature camp was short, but sweet. I’m sad I never went to camp as a kid, but the good news about growing up is that you can still choose to be a kid at heart. For the time that I was at Bricks and Sticks camp, crossing babbling brooks and following clues from the Earth Elf, I was a kid again. I loved every minute. 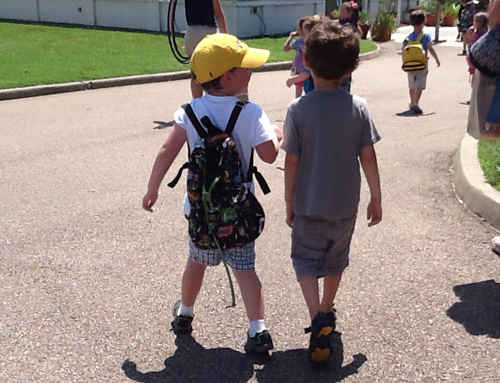 These two boys were inseparable. I even heard one lean over to the other and say, “We’re going to be best buddies forever.”

Limited space is available in these LEGO brick-related camps: