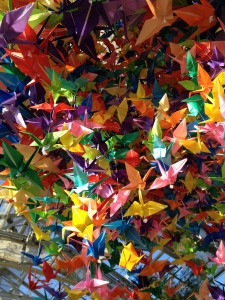 2,500 origami cranes form a colorful chandelier in the Cottage Garden of the Conservatory — 2. 5 Senbazuru.

The sight of an enormous rainbow chandelier dripping with strands upon strands of bright paper cranes does something to a person. Staring up at those 2,500 carefully folded works of art, I think, I want to make one. 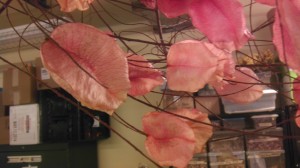 Chinese lanterns are one of dozens of specimens dried by volunteers for use in GardenFest decorations. Dried botanicals end up in garlands, fairy houses, and dining room decor.

This year’s Dominion GardenFest of Lights theme, “East Meets West,” showcases plants and decorative arts from East Asia that have influenced Western gardens and traditions. Last week on a visit to the GardenFest prep space, I saw miniature Japanese tea houses being readied for the toy train exhibit and orange Chinese Lantern seed pods waiting to be used in the botanical decorations. Clothes hangers hung nearby, draped with long garlands of the origami cranes that would make up the rainbow chandelier. What a difference a few days makes! Now, less than two weeks from the Illumination Ceremony, the tea houses have been nestled into the model train landscape in the Conservatory. Botanical decorations are going up soon in the Robins Room. The Education & Library Complex hallway is lined with trees waiting to be decorated by schoolchildren, and a dragon stalks the Moongate entrance to the Asian Valley Garden. And of course, the crane chandelier is in place. 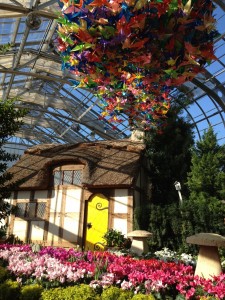 A cloud of cranes. The Cottage Garden will tell the story of The Empty Pot, about a small boy who tries to grow a beautiful plant from the seed given to him by the Emperor.

Inspired, I folded my very first origami crane the day the chandelier went up in the Cottage Wing of the Conservatory. A firm believer that YouTube can teach you to do just about anything, I used a video. Paper crane instructions abound and lots of people know how to make them, so you could just ask around, too. For materials, people use everything from fancy origami paper to magazine pages, newsprint, or even tissue paper and foil. When I waited tables, I occasionally received paper money folded into origami.

We had a couple sheets of slightly-rumpled origami paper in a box of ribbons and decorations in the Membership Office which I used for my first cranes. They’re flying above my desk in the Robins Visitor Center now. Having caught the bug, I’ve been folding cranes at home out of squares cut from scratch paper and advertisements. 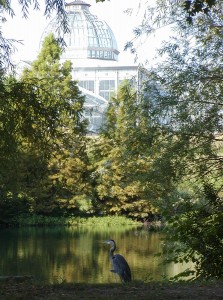 With hundreds of different origami forms, why the fascination with paper cranes? For me, it’s partly because they could just as easily be herons, and every time I have seen a heron in real life — perching atop the Robins Tea House, for example — it has been a special occasion. But herons don’t fly in flocks like cranes do, and a flock of 1,000 paper cranes can be a powerful thing. This is the other reason they fascinate me. Senbazuru (one thousand origami cranes) are said to bring their creator 1,000 years of health and good luck, or sometimes they are said to lead to a wish granted by a crane.

Whether or not you’re looking to fold your own senbazuru, don’t miss the origami crane chandelier at Dominion GardenFest of Lights this season. The event runs Friday, November 23 – January 7, 2013 (closed December 24 & 25), 5 – 10 p.m. nightly. 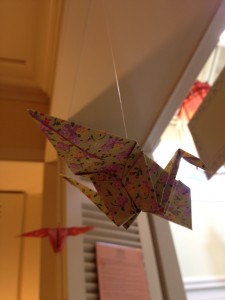 My first origami cranes watch over me at work in the Robins Visitor Center.