February is the time of year you may notice stark “stubs” of crape myrtles in parking lots and other areas around town. Often crape myrtle is so harshly pruned only trunks are left, with the top half of the tree hacked off.

The look is so prevalent that many believe this is the correct way to prune a crape myrtle (Lagerstroemia). Some might even think the trees need this type of harsh treatment. 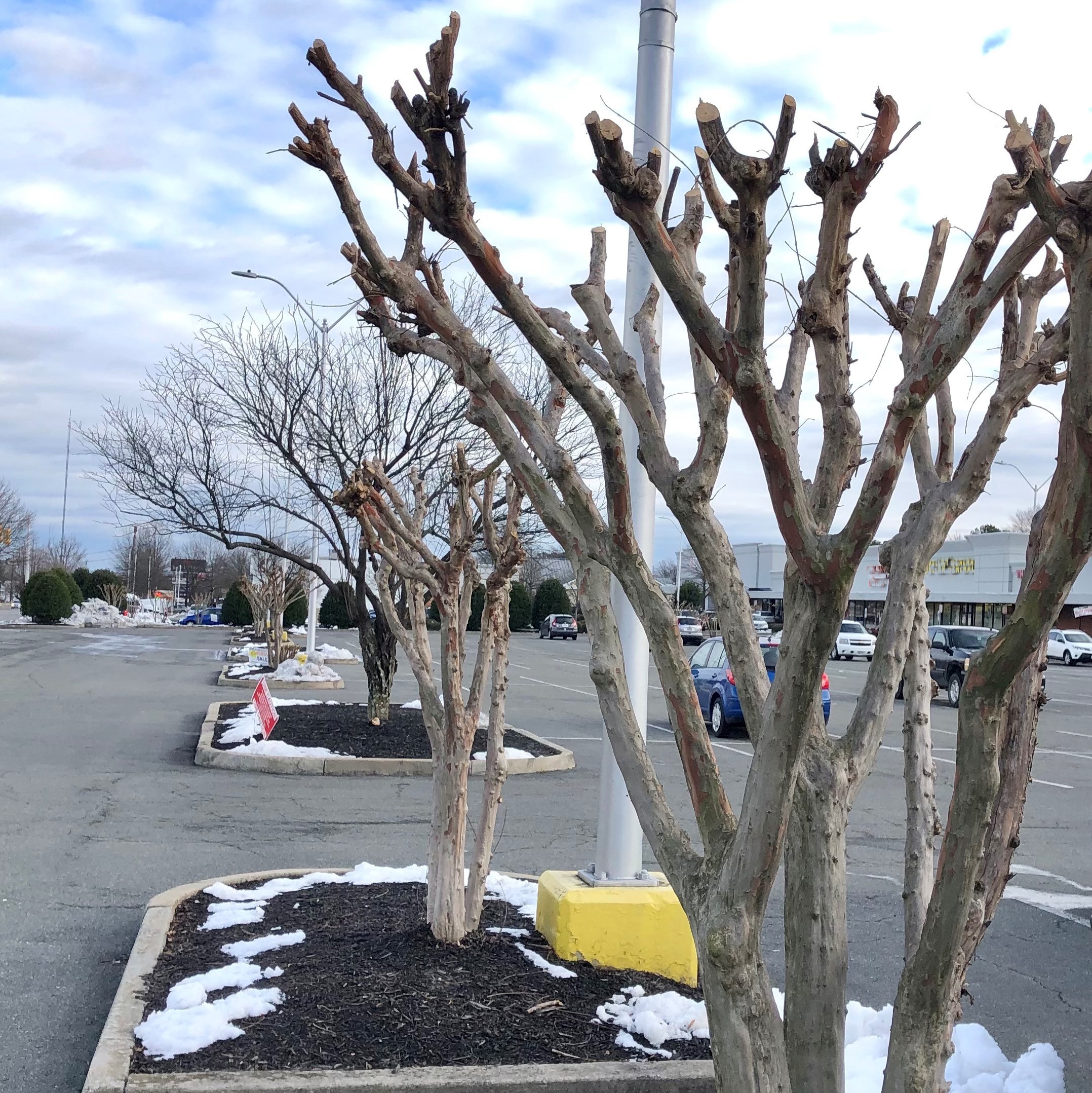 You may notice severely pruned crape myrtles in commercial landscapes. This is not a best practice!

“Not so!” exclaim horticulturists and arborists. In fact, there’s a movement to stop “crape murder” and share best practices.

If the look isn’t appealing and doesn’t benefit the tree, why do people do it? “It’s faster and easier and, quite frankly, the crape myrtle can take it,” explains Horticulturist Dean Dietrich.

But just because the resilient crape myrtle can take the abuse doesn’t mean it should have to. 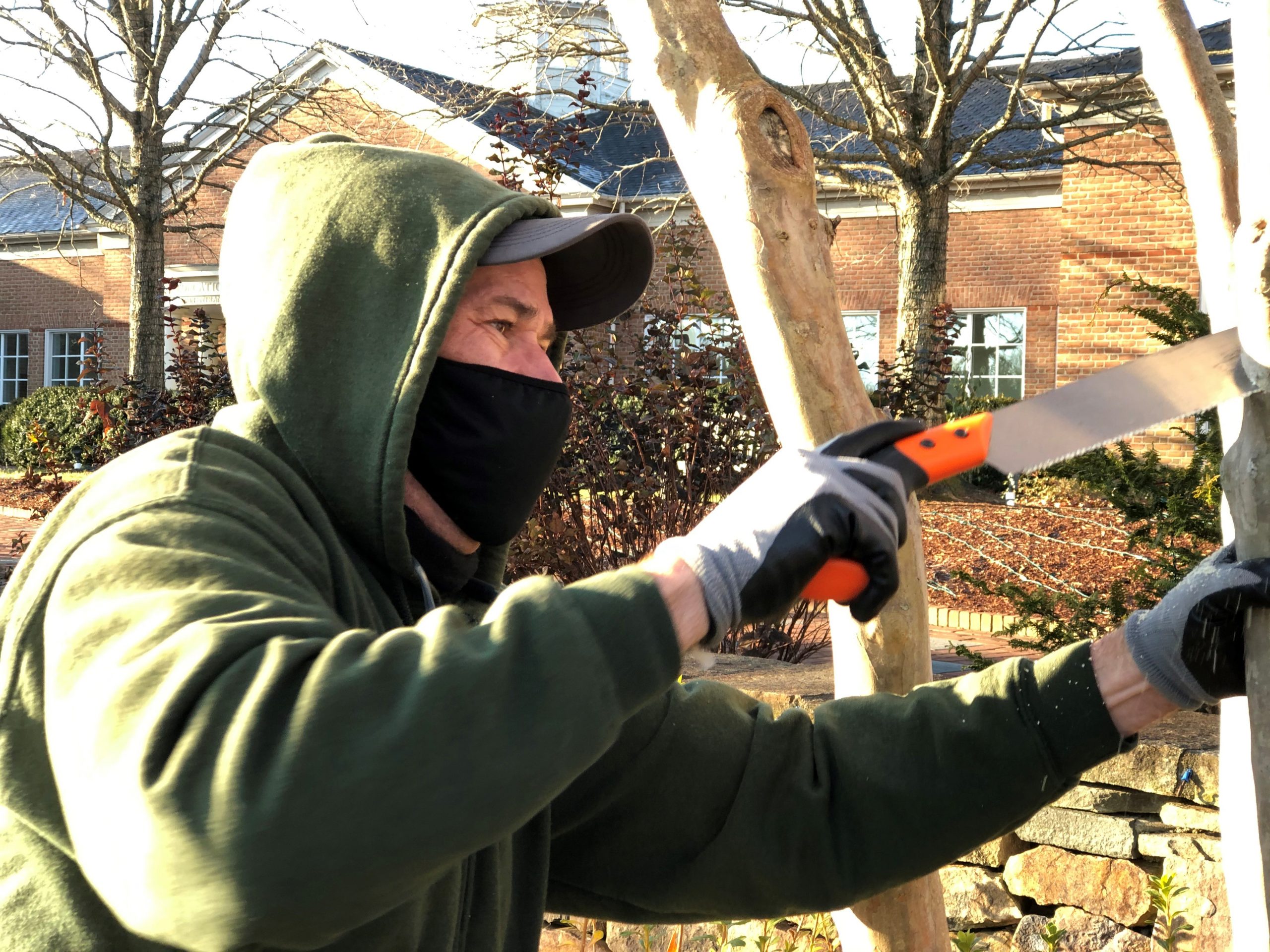 February is a good time to prune crape myrtles. It should be done before fresh growth appears in March.

Its toughness makes crape myrtle a popular plant. They are fast-growing and highly adaptable. They come in many shapes and sizes and provide interest through the seasons. The mottled barks of crape myrtles are attractive year-round, especially in the winter landscape, and the leaves offer fall color. Depending on the variety, in summer they offer frothy clouds of colorful blossoms ranging from white, pink, red, and purple. 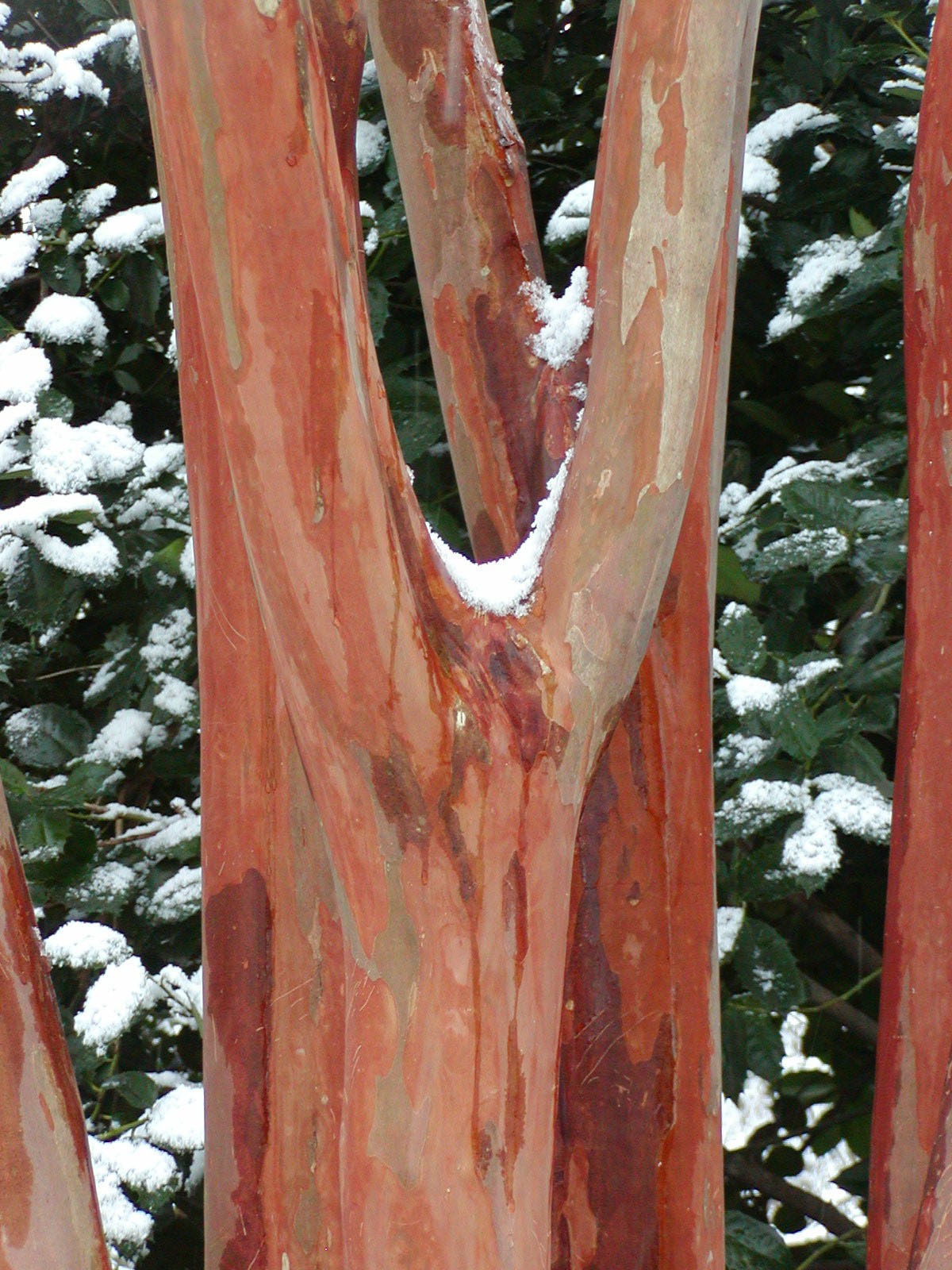 The beautiful and interesting barks of crape myrtles are a standout in the winter landscape.

The horticulturists at Lewis Ginter Botanical Garden have some suggestions to help you look at crape myrtles and pruning in a whole new way.

Step 1: Look at your tree
It sounds so basic, but don’t rush this first step. Dietrich explains, “Look at the limbs. What is your overall aesthetic? What do you want structurally? Do you want the branches to be overhanging to provide shade? Or are you looking for an upright form?” One of the reasons for the crape myrtles in the Sunken Garden is to provide shade for seating, so they are pruned according to that purpose. 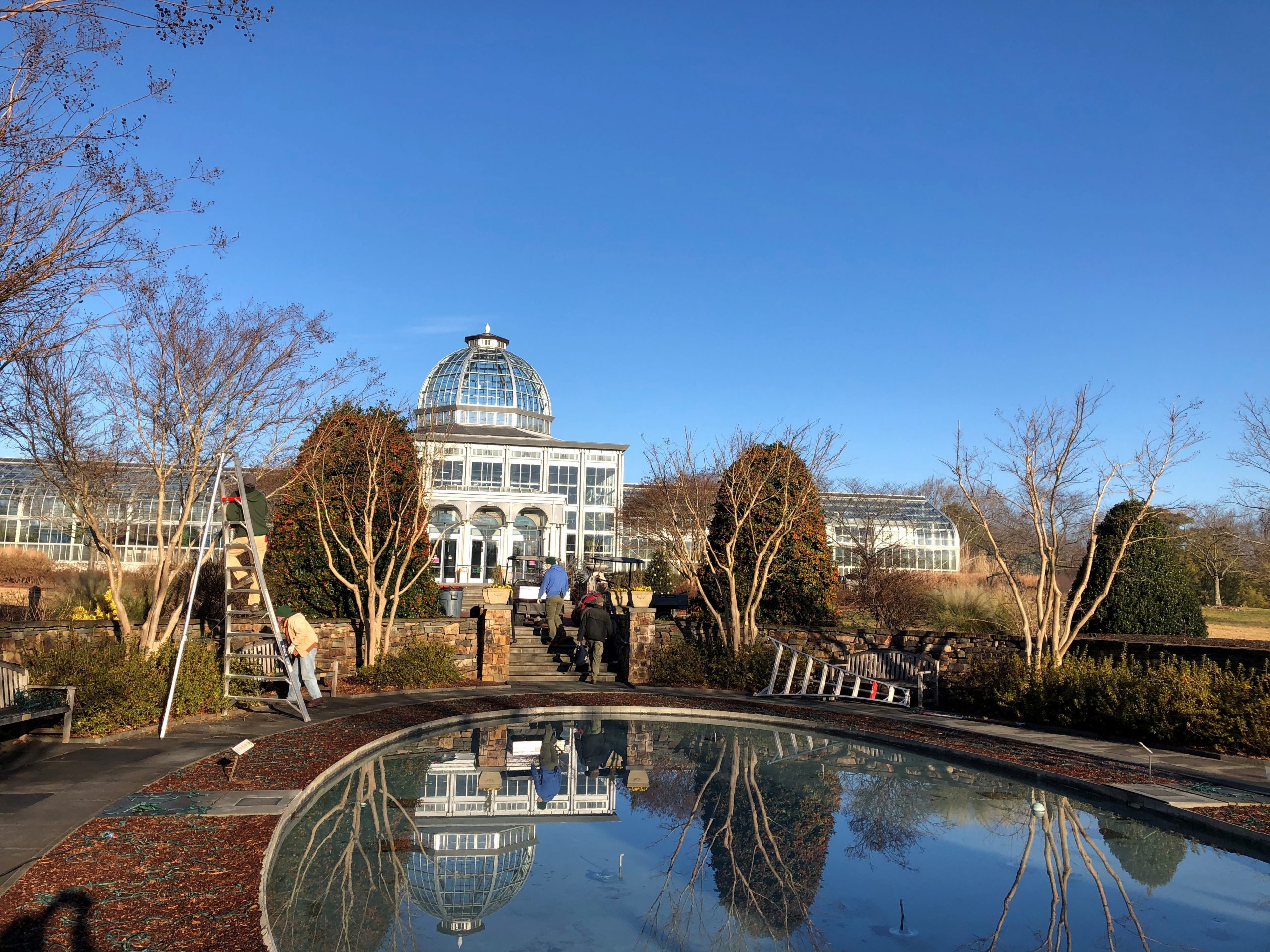 Crape myrtles in the Sunken Garden. You can see those on the right have already been pruned.

Step 2: Think ahead
Which branches can you do without? How will the remaining branches grow? This future view is important because what you do now will influence the tree’s scaffolding. Deciding what to leave in and what to take out requires judgment calls. “If you cut too many of the small branches or “suckers,” you won’t have as much to work with in the future,” says Dietrich. This is especially the case should you ever want to bring the tree down in height.

Typically you can prune up to one-third of the canopy. Cut more than that and it may result in a stressed tree pushing out a lot of new growth.

And if you don’t feel like pruning every year? You don’t have to. However, as Dietrich points out, “If you leave too many branches, it can be harder to retrain the tree when it is older.”

Step 3: Making the Cut
Safety is extremely important when pruning. Make sure you have the proper equipment and follow safety protocols. It helps to have someone assisting you.

The best tool is a hand-saw, however, you can also use hand pruners, pole pruners, and lopers, depending on the size of the branch. 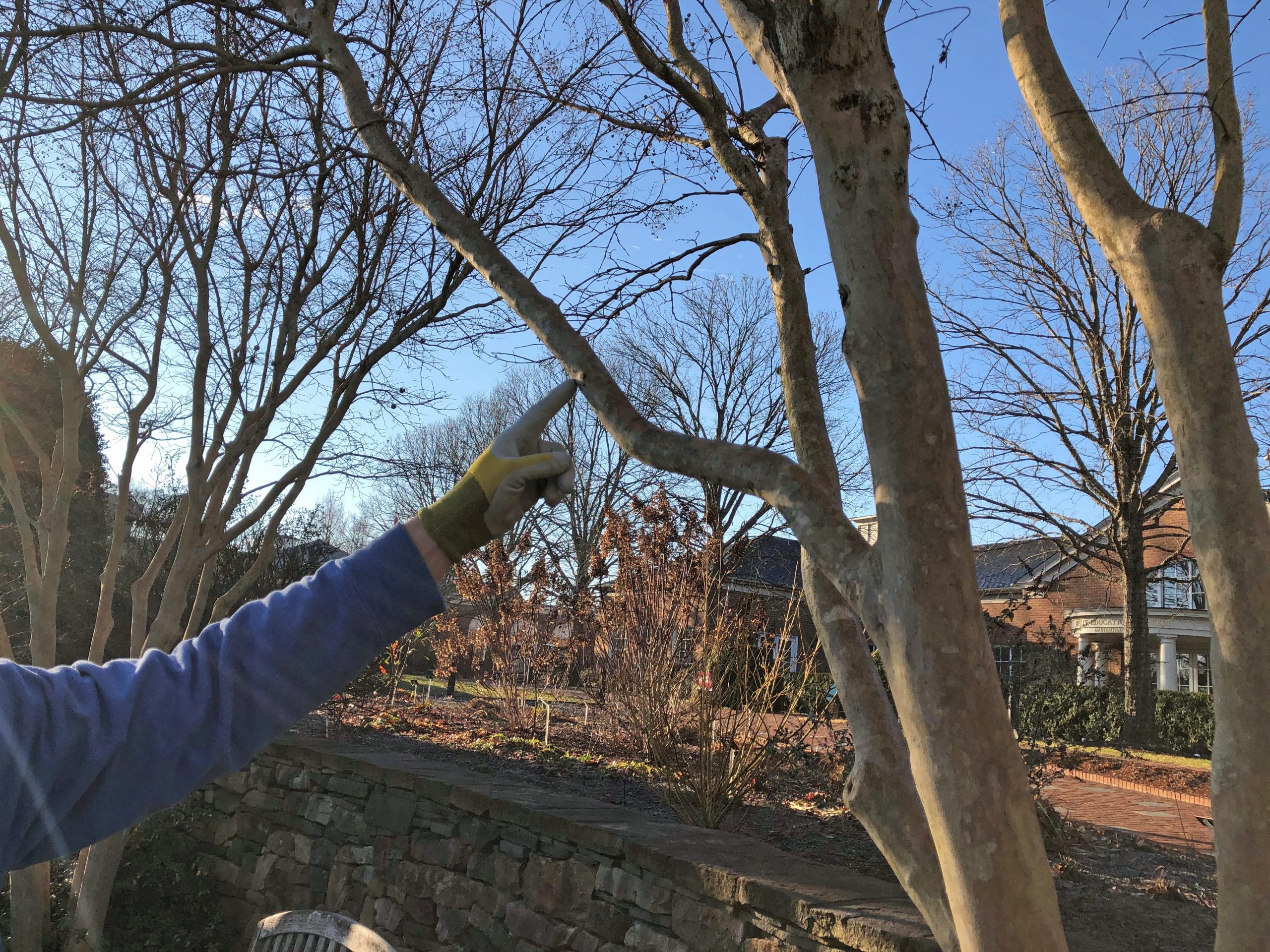 The first cut should be away from the tree trunk and on the underside of the branch.

When pruning a branch, you are going to make three cuts. Although the first impulse is to cut directly through the top of the branch, that can result in the limb snapping and tearing the bark, making it harder to heal and causing the tree to be more susceptible to pests and disease. Instead: 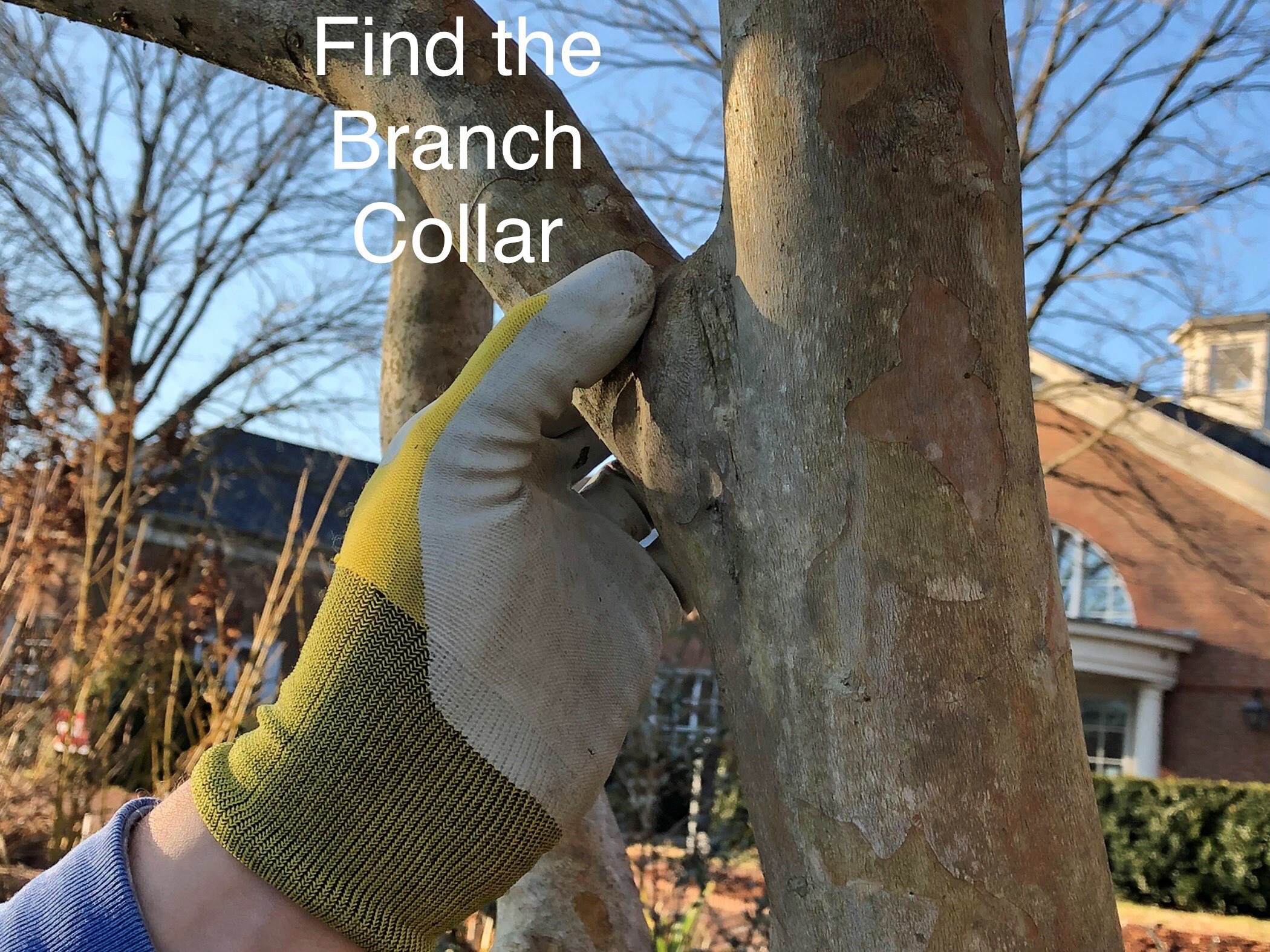 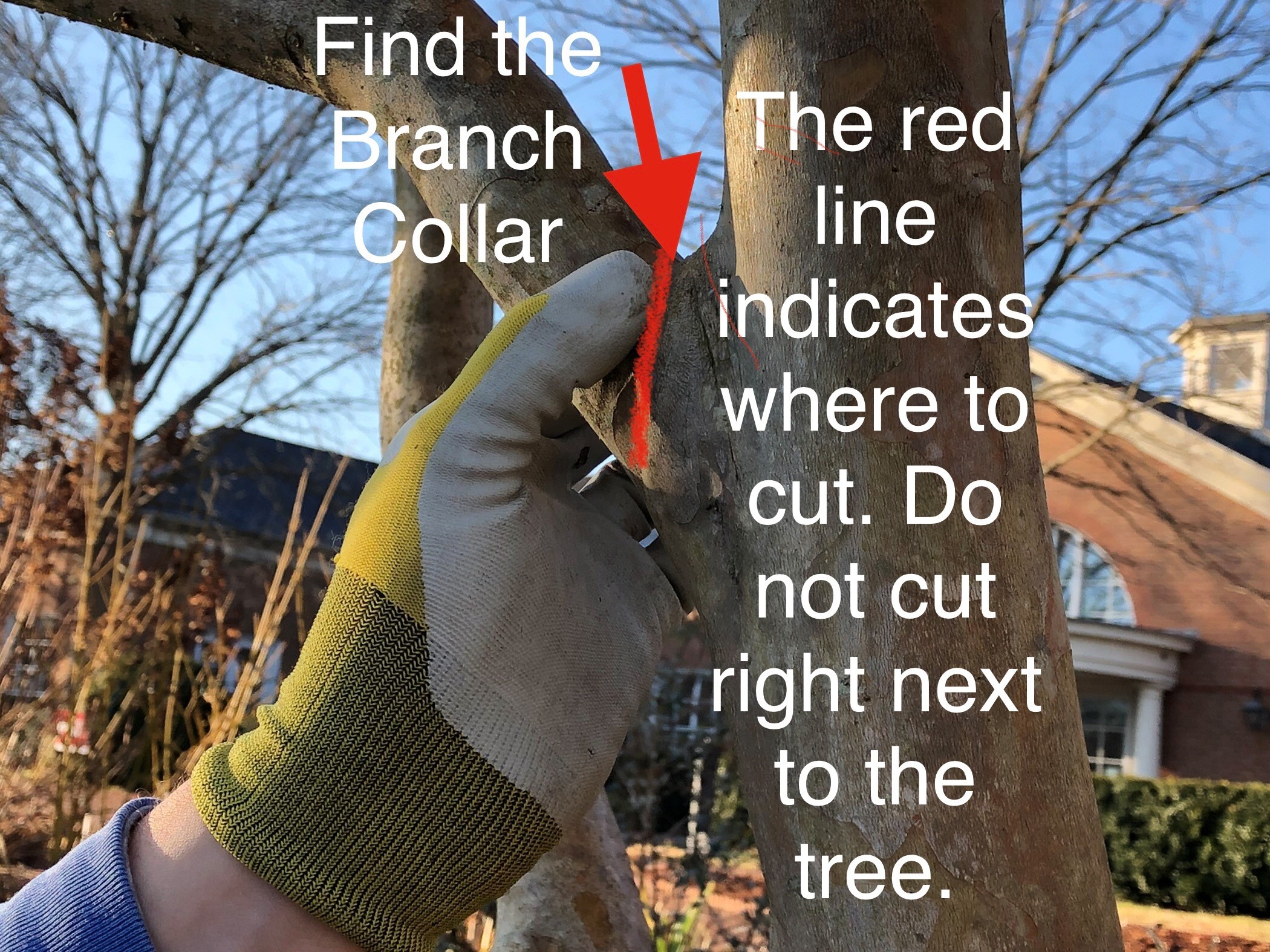 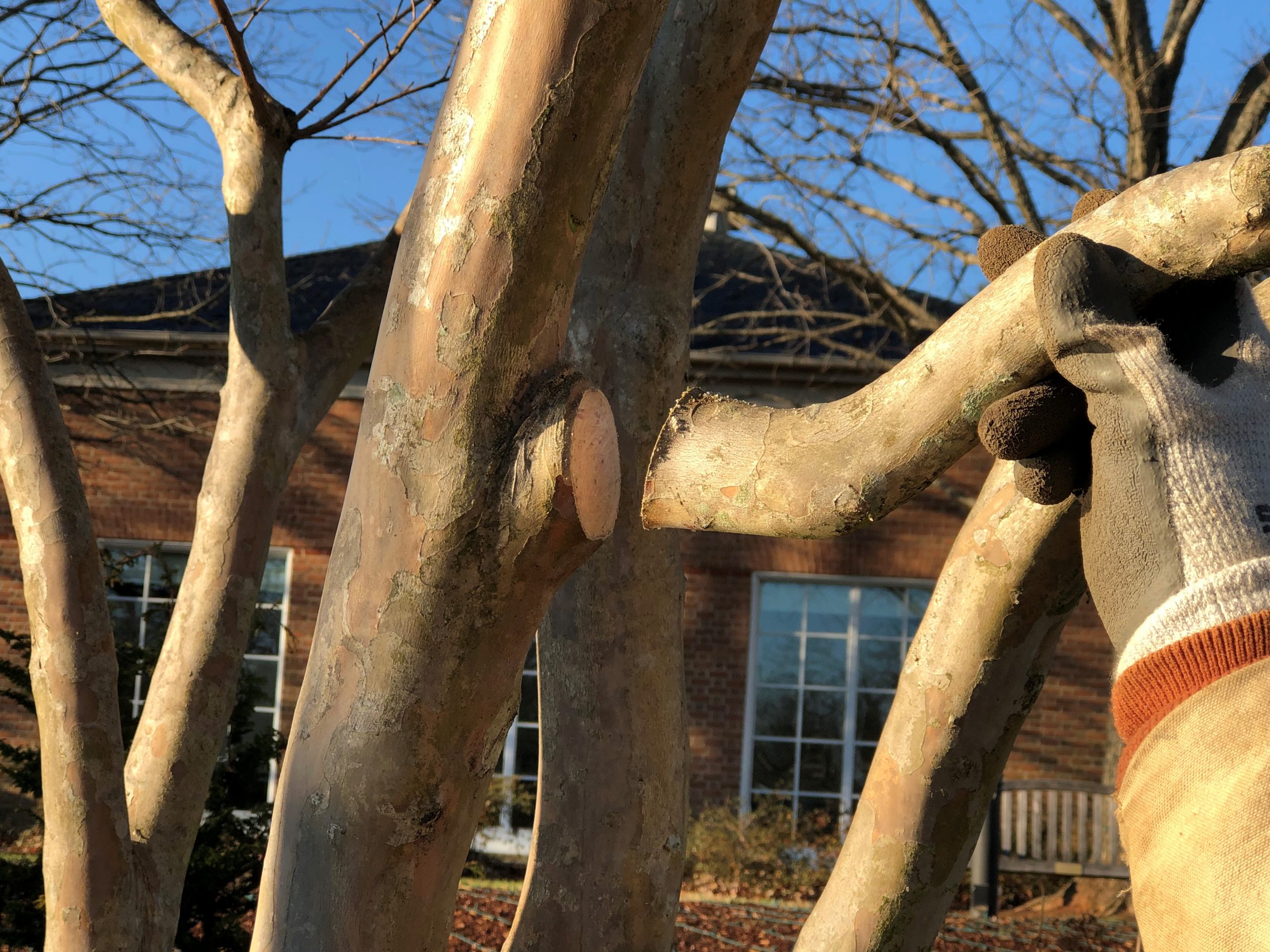 There should be a small stub left, which allows the bark to grow over and the tree to heal properly.

There are always new varieties of crape myrtles coming out onto the market. Be sure to know what you are getting before you purchase and think about how it will work in your landscape. Some varieties at Lewis Ginter Botanical Garden include:

Lagerstroemia ‘Lipan’
These line the outer edge of the Sunken Garden. They can grow 8- to 15- feet tall and have lavender-pink flowers. 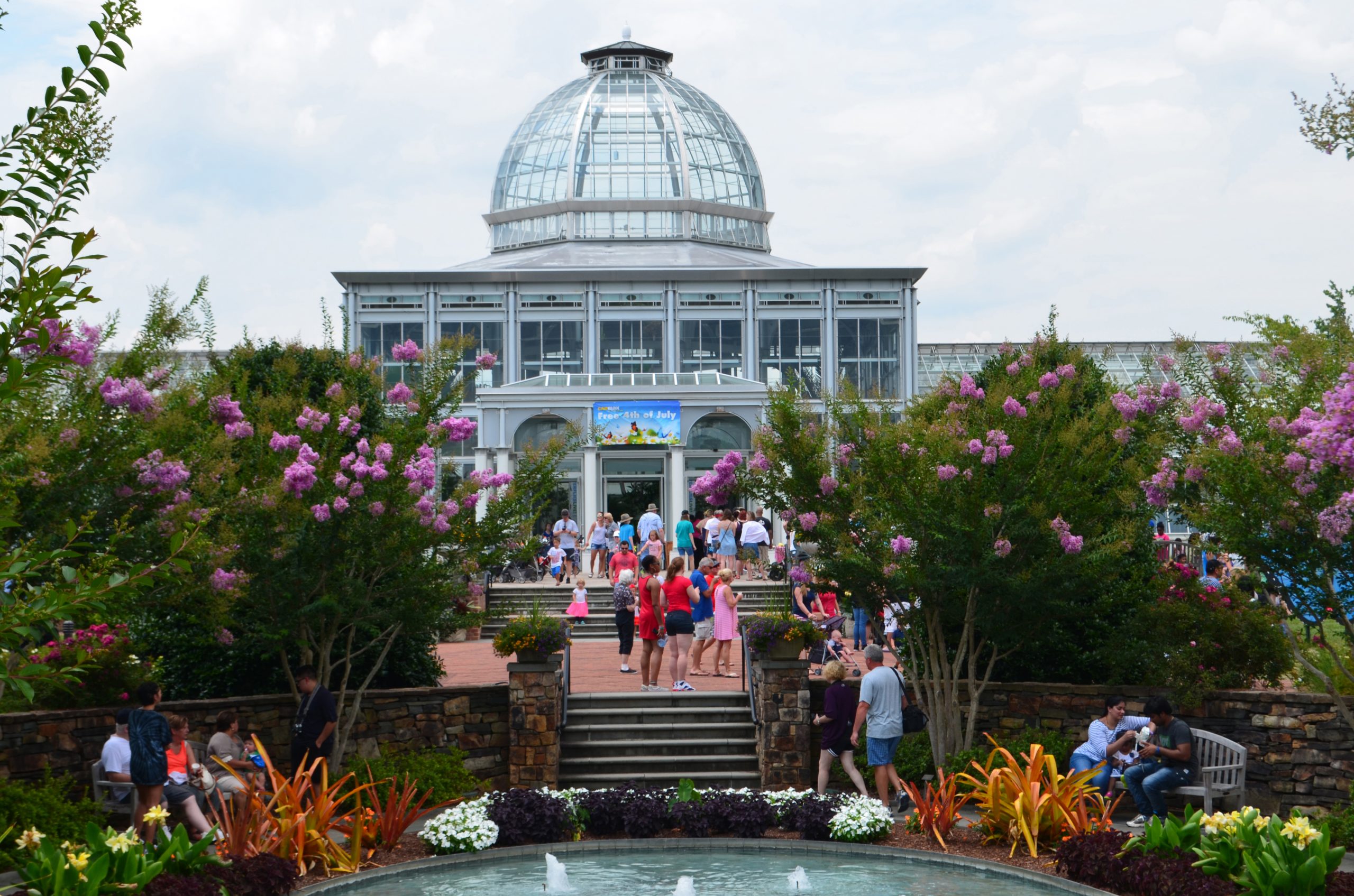 Razzle Dazzle Series
Developed by breeder Michael Dirr, the Razzle Dazzle series is known for their compact form and brilliant color; you can find them in the trade under the names: Ruby Dazzle (pink flowers with bronze-red foliage), Cherry Dazzle (cherry-red flowers), Snow Dazzle (white flowers), Dazzle Me Pink (pink flowers) and Raspberry Dazzle (raspberry-red flowers). Their mature height is 4 feet tall, which makes them more of a shrub in the landscape.

Lagerstroemia fauriei ‘Townhouse’
This crape myrtle cultivar is a tall one, growing to heights of 23-30 feet. They have white flowers and are especially known for their beautiful deep brown and cinnamon-colored bark. You may have admired these planted in the North Terrace Garden, the first space you come to when you exit the Visitors Center into the Garden.

This article is meant to provide an alternative to “crape murder” and to help people see crape myrtles in a different way. It’s a subject that we’re passionate about and have even covered in a past Facebook Live video. We suggest additional research to learn more about pruning. Dietrich suggests fixing a cup of coffee, standing back and really looking at your crapes before you do anything. Sounds like a good plan to me! 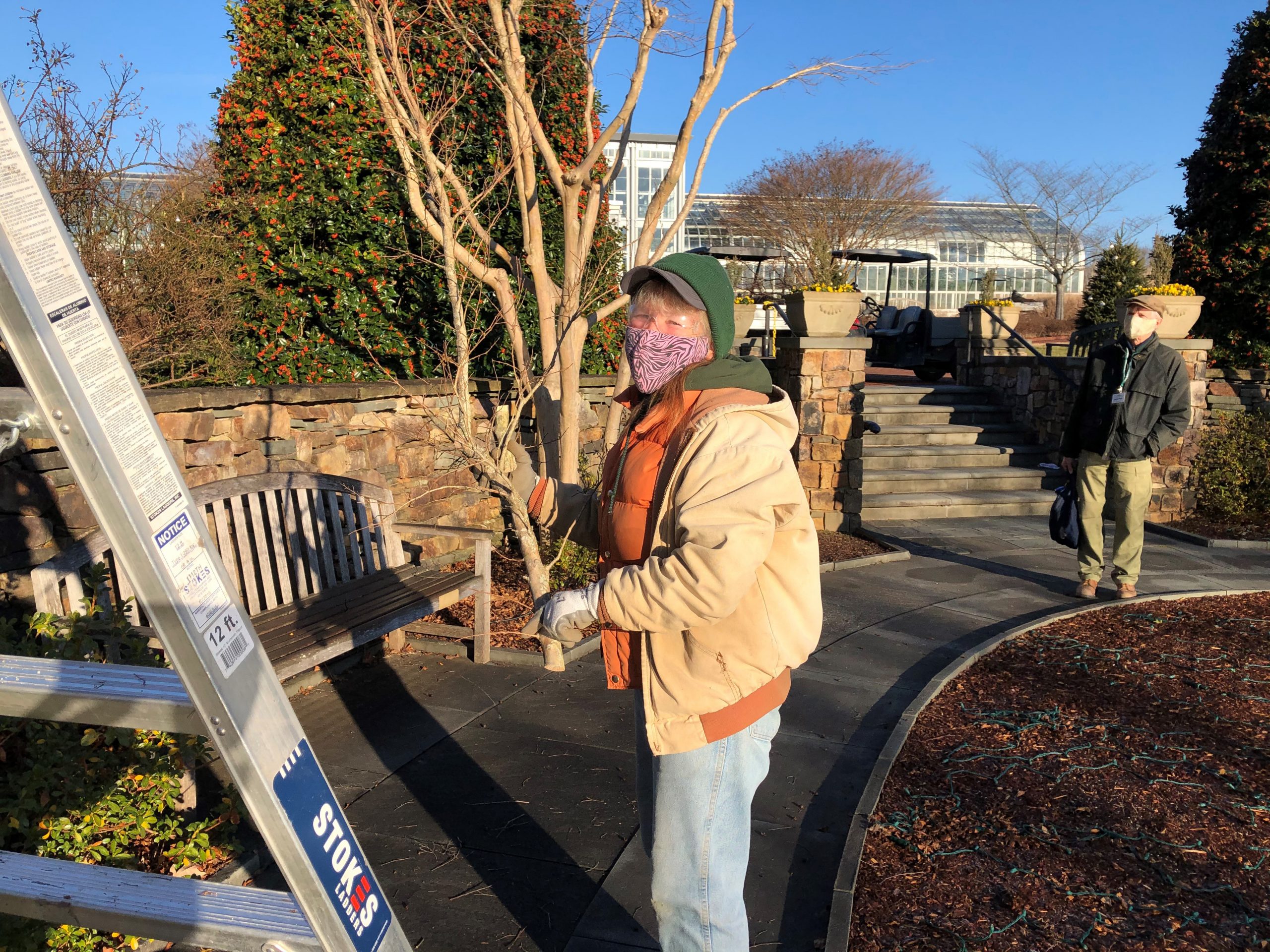 It’s always good to have help! Horticulturist Laurie McMinn shares: “You don’t prune when temps are below freezing or wood is wet.”

Learn about A Million Blooms and other spring events!

Minimalism. One of its appeals is in stripping away the superfluous and admiring the beauty of simplicity. The same can be said of the garden in winter, especially trees. Enjoy simplicity with winter tree ID.