Stories from Yesteryear: The Story of Lewis Ginter

In 1919, Grace Arents was asked by the Press Association Compilers, Inc., of New York, publishers of  The Cyclopedia of American Biography, to review its entry on her uncle Lewis Ginter. Here are excerpts of her words about her uncle.

His father died when he was a few months old, and his mother ten years later. His home was then with his oldest sister [Jane Ginter Arents], ten years his senior and married. When he was twelve years old he refused to go any longer to school and found a place for himself in a store. A few years later, before he was eighteen, he made a trip with a friend to Richmond, Virginia, and liking the place he found employment there in a hardware and notion store. When only nineteen he made his first trip to Europe to purchase clocks and other fine merchandise. … He prospered in business and eventually established a lucrative wholesale enterprise, that became one of the largest concerns in the South, dealing principally in imported linens, white goods, and woolens.

At the beginning of the Civil War he had accumulated a fortune of $200,000. He sold out all of his business and invested the proceeds in tobacco, sugar, and cotton, which he stored, and then joined the Confederate Army … He was appointed Commissary to Gen. Joseph R. Anderson, with the rank of Major, and later in the same capacity under Gen. Edward L. Thomas of Georgia. He was popular under both commands and so in evidence in times of battle, that he was familiarly known as “the fighting Commissary”. For the rest of his life he was always addressed as Major Ginter. His tobacco and sugar were lost in the fire which destroyed a part of Richmond, the day the city was evacuated by the Confederates in April 1865.

He was more fortunate in his holding of cotton which gave him a small capital with which to again begin business. He returned to New York in the summer of 1865, and located in Wall Street at the head of a banking concern. For some years the business did well, but he finally failed for $200,000 on “Black Friday”.[Panic of 1873] Though financially ruined,  in the ordinary sense of the phrase, and fifty years old, Major Ginter was by no means discouraged. He was soon traveling through the country in the interest of tobacco consigned to him by his friends in the South, and he was so successful that eventually every dollar he owed by reason of his failure in Wall Street was paid with interest. 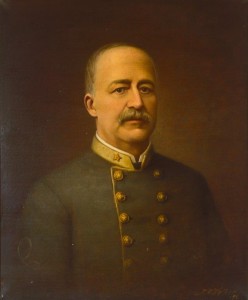 Next week:  What happened after the Panic and repayment of debts.