Garden volunteer John Popenoe celebrated his 90th birthday with some of his favorite friends: tropical plants, along with Conservatory staff and volunteers. 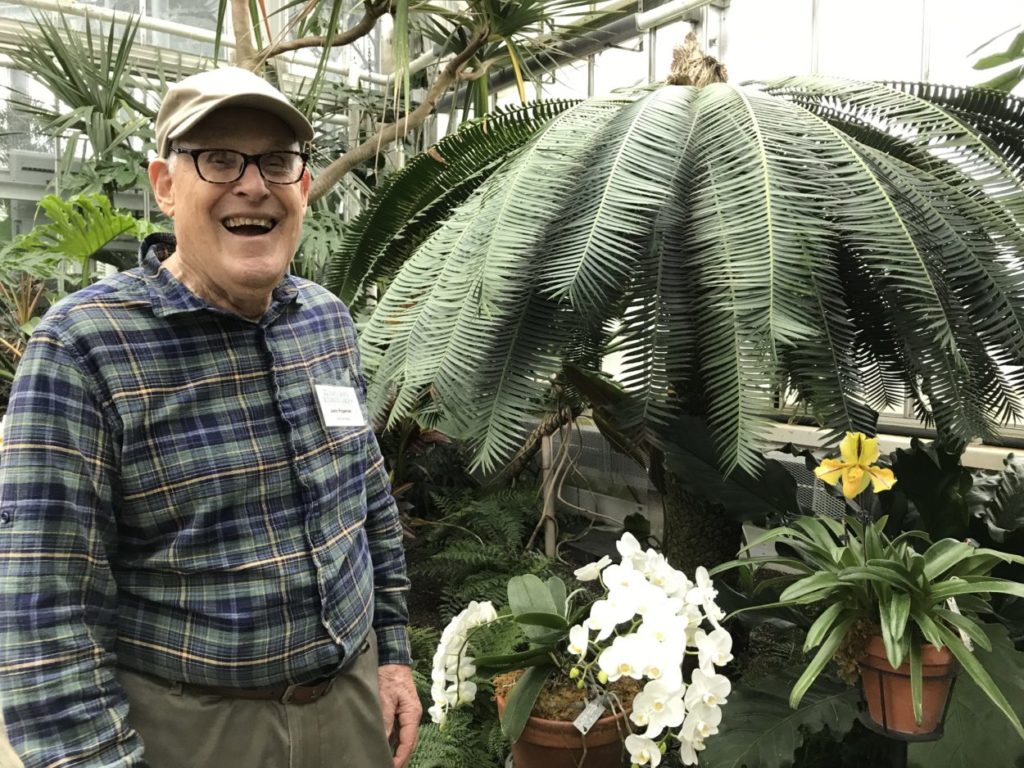 John Popenoe with one of the many tropical plants he loves — a cycad.

John’s introduction to plants was his grandfather’s avocado nursery in Pasadena, California. In 1950, he graduated from UCLA with a B.S. in horticulture. He also earned masters and doctoral degrees.

During his career, John was the director at Fairchild Tropical Botanic Garden in Coral Gables for 28 years. The 83-acre botanic garden boasts extensive collections of rare tropical plants that include palms, cycads, flowering trees and vines. Concurrently, he served as an adjunct professor of botany at the University of Miami. John was a researcher at the University of Florida Subtropical Experimental Station in Homestead. In addition, he served as a board member with the Nature Conservancy and president of the International Palm Society.

John and his wife moved to Richmond about 12 years ago, to be closer to their family. He already knew about Lewis Ginter, having attended conferences with Bob Hebb, the Garden’s former executive director. In 2006, John signed up as a Garden volunteer. 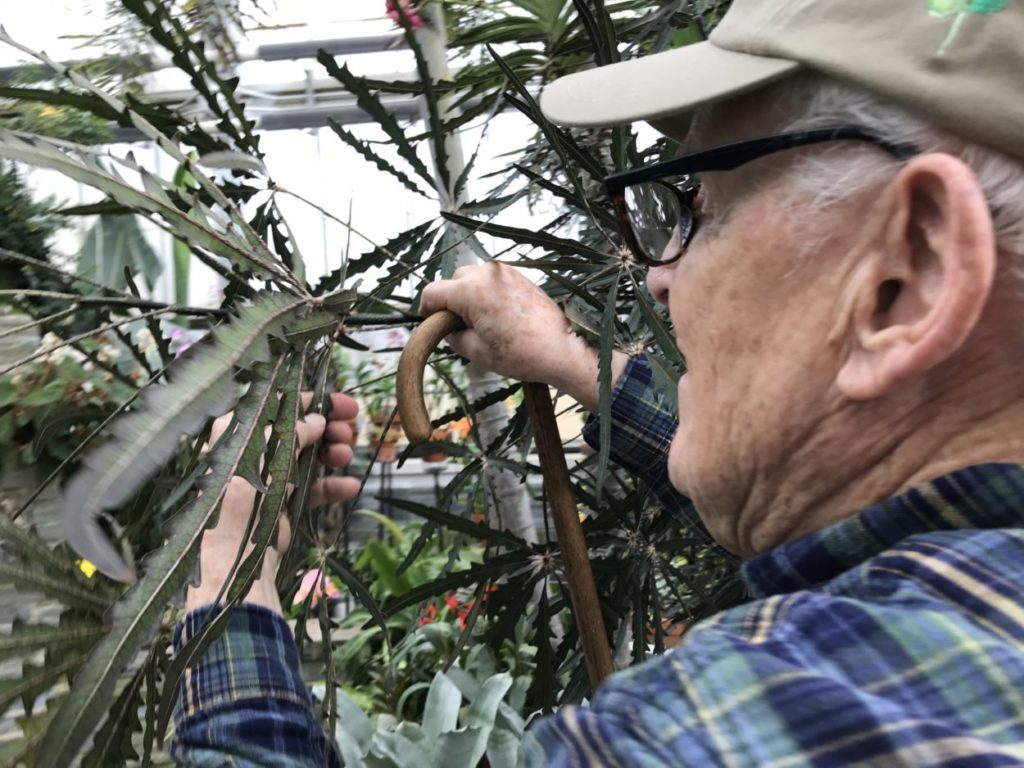 Popenoe says he’s perfect for the job of removing scale on the tropical plants in the Conservatory because he uses his cane to reach high limbs and gently pulls them down to inspect. If you look closely, you can see the scale, a white dot, near his thumb. His volunteer duties include removing the sale by hand to improve the health of the plants. 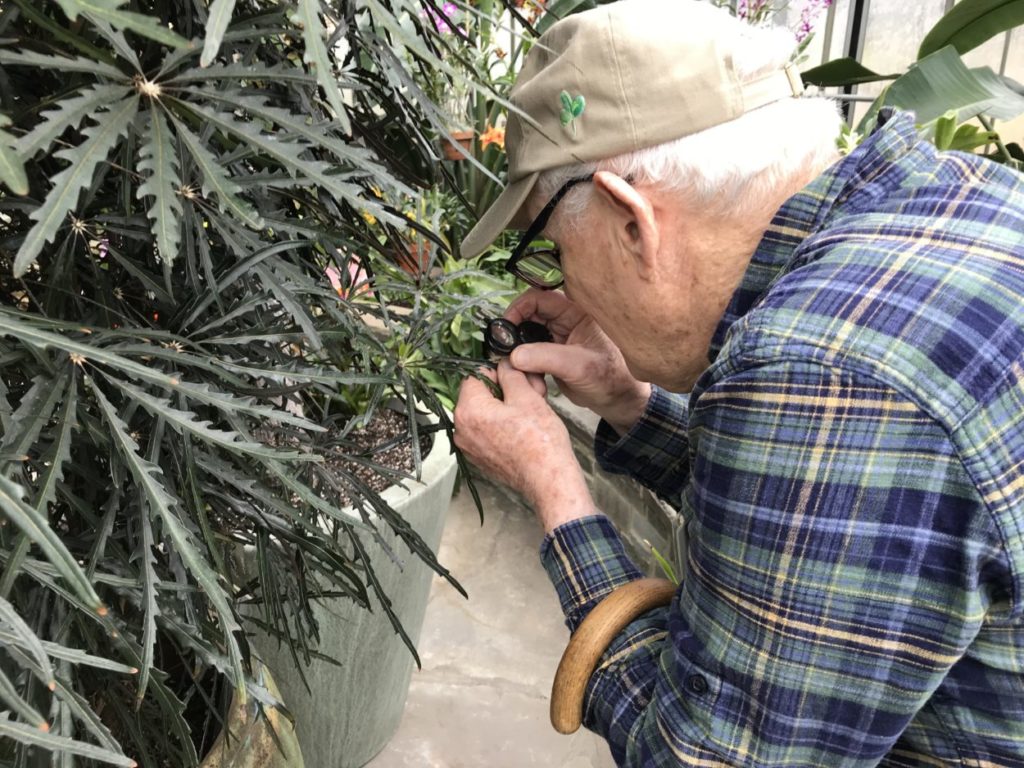 John Popenoe uses a magnifying glass to view the smallest scale on a tropical specimen. Once he finds it, he removes the scale by brushing it off with his fingers.

Today, John continues to share his vast knowledge of tropical plants with the Conservatory staff. He also explains plant origins and consults with them about plant materials.

“John has contributed so much to the horticultural community,” said Ryan Olsen, Conservatory horticulturist. “It’s an honor that he dedicates his time every week to help Lewis Ginter care for our collections. He also spreads his knowledge to visitors yet remains humble about his deep understanding of plants.”

With close to 70 years’ experience in the field, one might presume John knows most everything related to horticulture. However, he quickly dispels that assumption.

“You can never learn everything because new plants are always being discovered,” he said.

John should know. Years ago, while collecting trees in the Bahamas, he discovered a new species – a tree in the legume family. Its botanical name will always bear his: Ateleia popenoei. 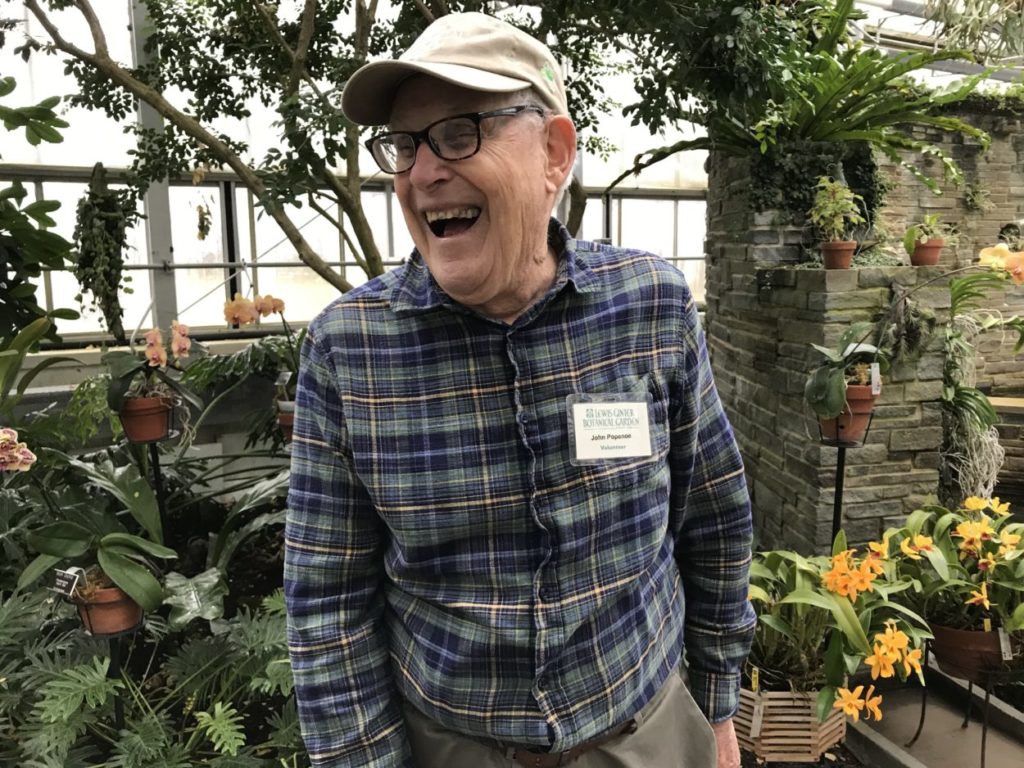 “Being with John Popenoe (pictured) is a joy. He freely shares deep knowledge like a sage, but with a boyish twinkle still excited by curiosity and discovery.”
—Volunteer Rebecca Dobyns

THE ART OF PLAY

The Garden will transform into a vibrant canvas where visitors will express themselves in a palette of playful activities.

The Garden's Celebration of Spring