Graceful. Aerodynamic. Lighter-than-air. These adjectives all come to mind when I look at the photos of the tree swallows captured by Charles Woodrich at Lewis Ginter Botanical Garden. 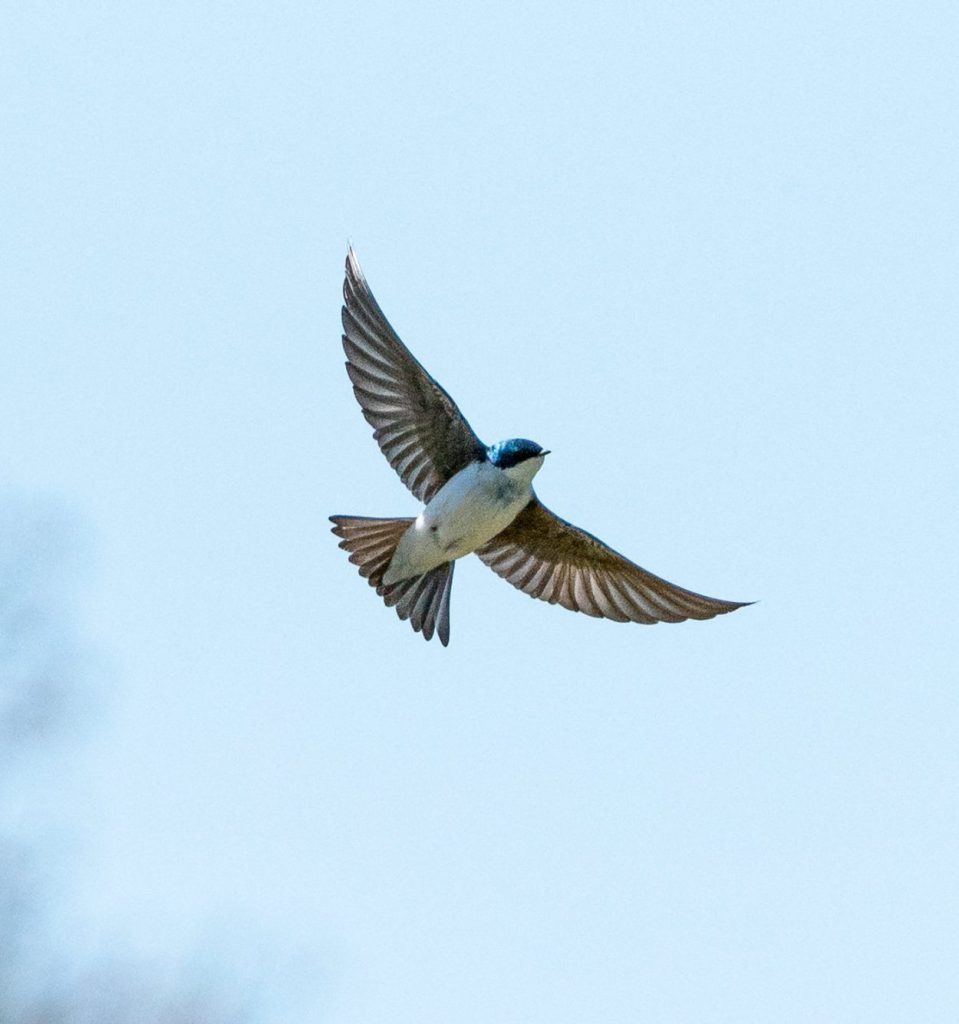 A tree swallow soars into the air. Image by Charles Woodrich.

Across the seven images, swallows swoop through the skies and around trees, with one posing on a bird feeder. In some, their wings beat intensely close to their rounded bodies; in others, they extend outward, forming symmetrical rays. My favorite features a tee swallow exposing its full wingspan, giving the tiny bird the poise of a hawk.

The photos reminded me of a photo I’d seen recently of another well-loved Garden bird. The snapshot from our Instagram story features a box of bluebirds on the bluebird trail nuzzled together, their features indistinguishable under their azure wings. The caption says it all: “Aww…baby bluebirds sleeping! So cute!” I’ve learned a lot about bees and butterflies while at the Garden, but not nearly as much about these bluebirds and the tree swallows. Inspired by these photos, I set out to learn how the two compared to each other. 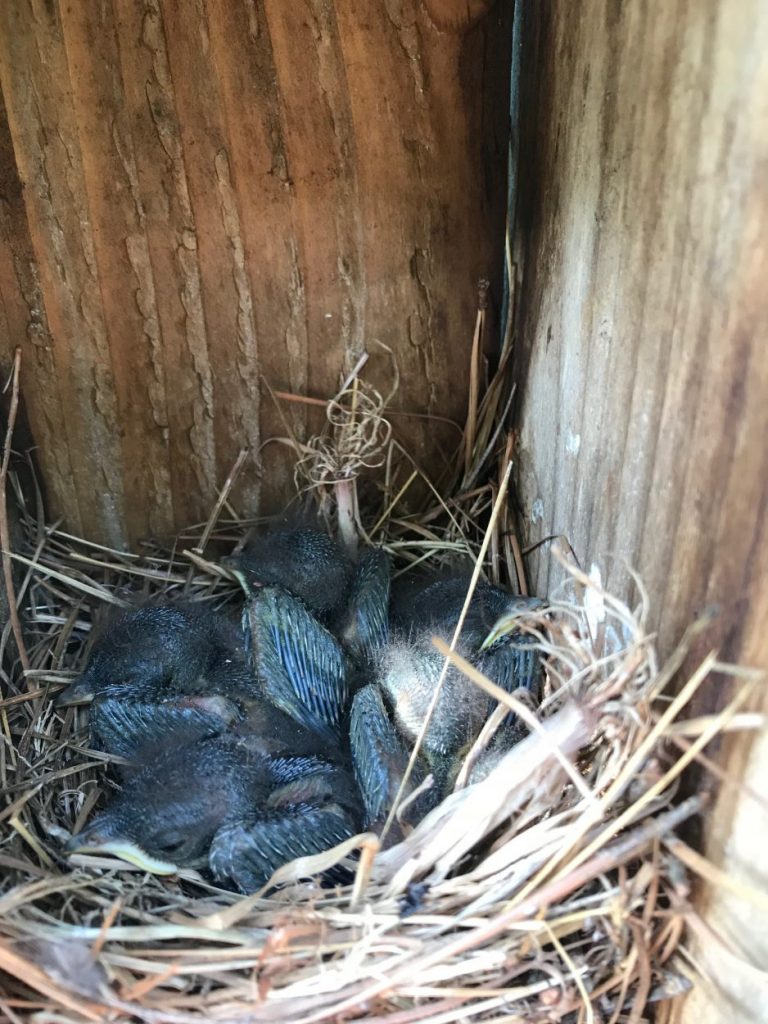 Baby bluebirds nesting in a stop on the Garden’s bluebird trail.

Facts Behind the Photos

The biggest similarity between bluebirds and tree swallows is that both are what is known as cavity nesters, meaning that they lay their eggs in sheltered areas as opposed to nests. I had wondered if there was some other relationship between the two, but Garden volunteer Buz Sawyer gave me the facts. He explained that there’s little to no interaction between the two species, other than their nesting and shared habitat. Bluebirds are territorial—hence the need for the Garden’s bluebird boxes in the first place. “Oddly enough, they don’t mind other species as much as they dislike their own,” Sawyer said. Sparrows, as Woodrich’s photography might suggest, prefer a wide open space, with access to water. According to Sawyer, only about two of the Garden’s 16 nest boxes have been inhabited by swallows.

“Until recently, tree swallows have been scarce in the garden,” Sawyer added. “Having had two successful nesting years in a row we are hopeful that there may be many more. We don’t mind sharing our nest boxes with them so long as we can have plenty of bluebirds in our other boxes.” 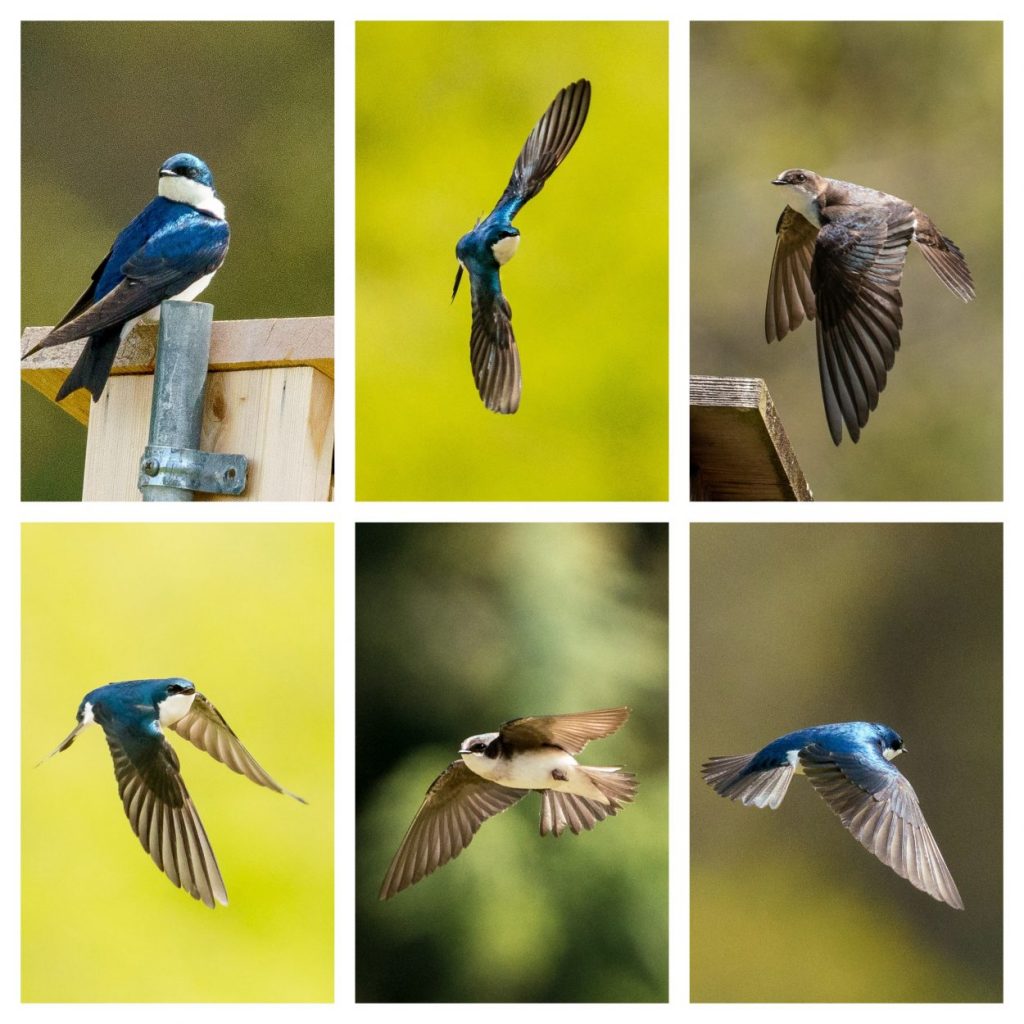 The brilliant blue tree swallows are male. The brown tree swallows, with some light hints of blue on the outside wing are female. Photos by Charles Woodrich.

When I thought there might be a connection between bluebirds and tree swallows, I was likely confusing the swallow with a similar-sounding bird: the house sparrow, which is known as an enemy of bluebirds. As fellow cavity nesters, these birds compete with bluebirds and tree swallows. They will do anything they can to occupy a space, even kill or evict another bird. Fortunately, Sawyer notes that these aggressive birds have been on the decline in recent years, which should be good news for both species.

You’ll notice in the photos above that the male tree swallows are the brilliant blue color, the females are typically brown or gray.

I hope that I’ll be able to find sparrows and bluebirds in the future when walking the Garden’s trails. If you manage to capture a photo of any birds near Origami in the Garden pieces, consider submitting it to our Instagram contest!

Special thanks to Garden Volunteer Charles Woodrich for sharing his beautiful photos.

Claire Jeantheau, the summer Public Relations/Marketing Intern at Lewis Ginter Botanical Garden, is excited to use her background in writing and social media to tell the stories of the green spaces here she loves. She currently studies classics and social entrepreneurship at Dickinson College.

Join Garden photographer Tom Hennessy for this two-day nature photography workshop, with the chance to capture flowers, landscapes, and butterflies.

Share your favorite photos from Origami in the Garden by tagging them #OrigamiGarden and you’ll be entered to win a prize package.