Heirloom Tomatoes of the World on Display

Mikey Partusch is an artist. He studied film and printmaking, then he discovered his love of growing things. If you can make art from vegetables, that is what he does as the sustainable gardener in the Kroger Community Kitchen Garden. His palette is 35 varieties of heirloom tomatoes from all over the world, along with yellow squash, zucchini, beets, lettuce, green beans, herbs and flowers that add beauty and attract pollinators. Partusch brings his passion for creative problem-solving and magic to growing food for Central Virginia’s neediest citizens. Each week, he delivers hundreds of pounds of organically grown vegetables to Feed More, Inc. for their Meals on Wheels and Kids’ Cafe programs, delivering fresh food to those in need. 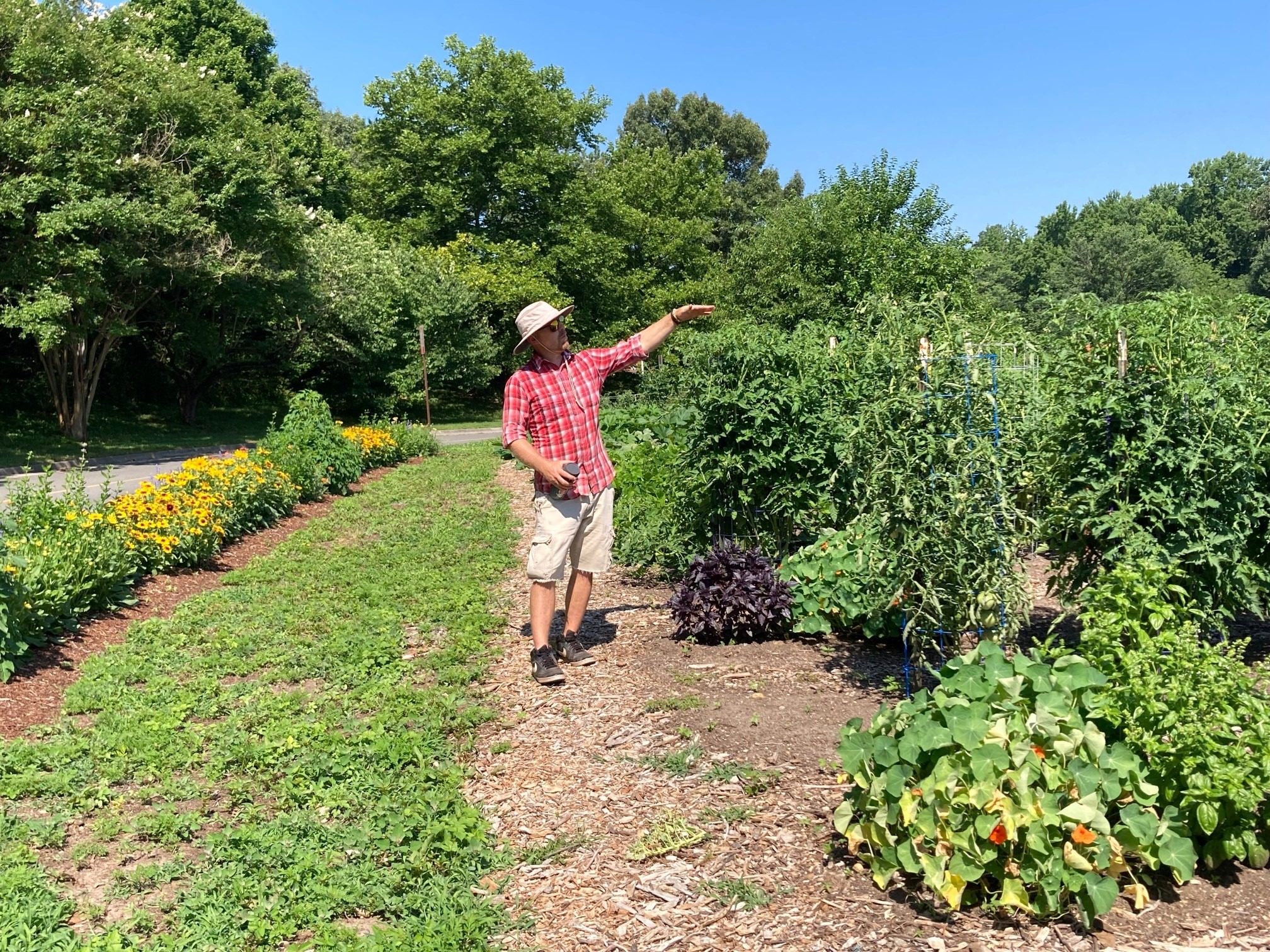 You must be a creative problem-solver if you are trying to grow as much food as possible with limited resources. When Partusch didn’t have enough tomato cages to stake all the tomatoes he wanted to grow, he asked if he could borrow the metal stakes we use each year to create the maze feature at Dominion Energy GardenFest of Lights. I may never look at the GardenFest maze the same way again.

Like any true visionary, Partusch doesn’t accomplish this alone. He has a team of loyal volunteers, including Debbie Hernandez, Terry Braun, Chris Peterman, Ginny Heatwole, Dave Sumner and Karen Littell, who help him each week. 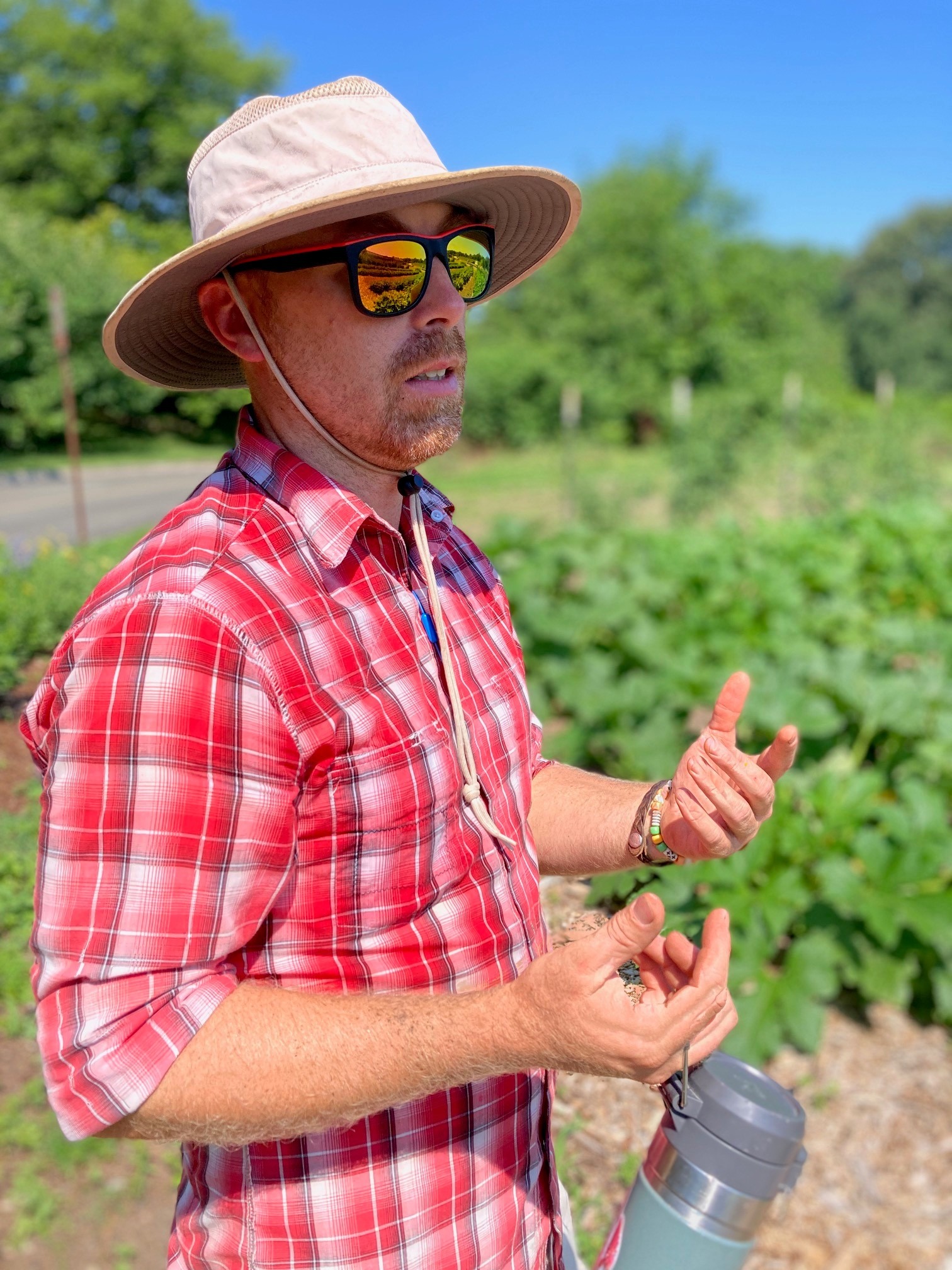 “I couldn’t function without my Wednesday group of volunteers,” he explains. “I promised them in early spring that if they stuck with me, then when it got hot, all we would be doing in summer was harvesting and just a little weeding.” They more than stuck with him; they rose above and beyond.  “They look very proud of what we are doing.”

And this week, just as Partusch said, what they are doing is mostly harvesting. Earlier this week he dropped off 474 lbs. of beets, yellow squash, zucchini and green beans. This year, so far, we have donated a grand total of 2,037 lbs. of organically grown fresh vegetables to FeedMore, which far surpasses last year’s donations for the entire year.  That’s pretty impressive considering that until this year, we had struggled with Southern Blight and nematodes. The nematodes are now at a threshold level and the Southern Blight seems to be in check, thanks to adding lots of organic material like compost to the soil.  It was truly a team effort.

You can tell Partusch loves talking to people and educating them about plants.  When I saw him during CarMax Free Fourth of July, he was engaged with guests, encouraging visitors to taste green beans fresh off the plant and sun-warmed blackberries. More often than not, visitors have never seen their food growing or had the opportunity to eat straight from the plant, Partusch says. Many, at first, are reluctant to do so, thinking eating raw beans isn’t safe. It is safe! Sometimes he has to convince them by demonstrating how, leaning down to pick a vegetable and eating it first. The smile on someone’s face when they take the first bite shows that this is a moment they won’t forget soon. 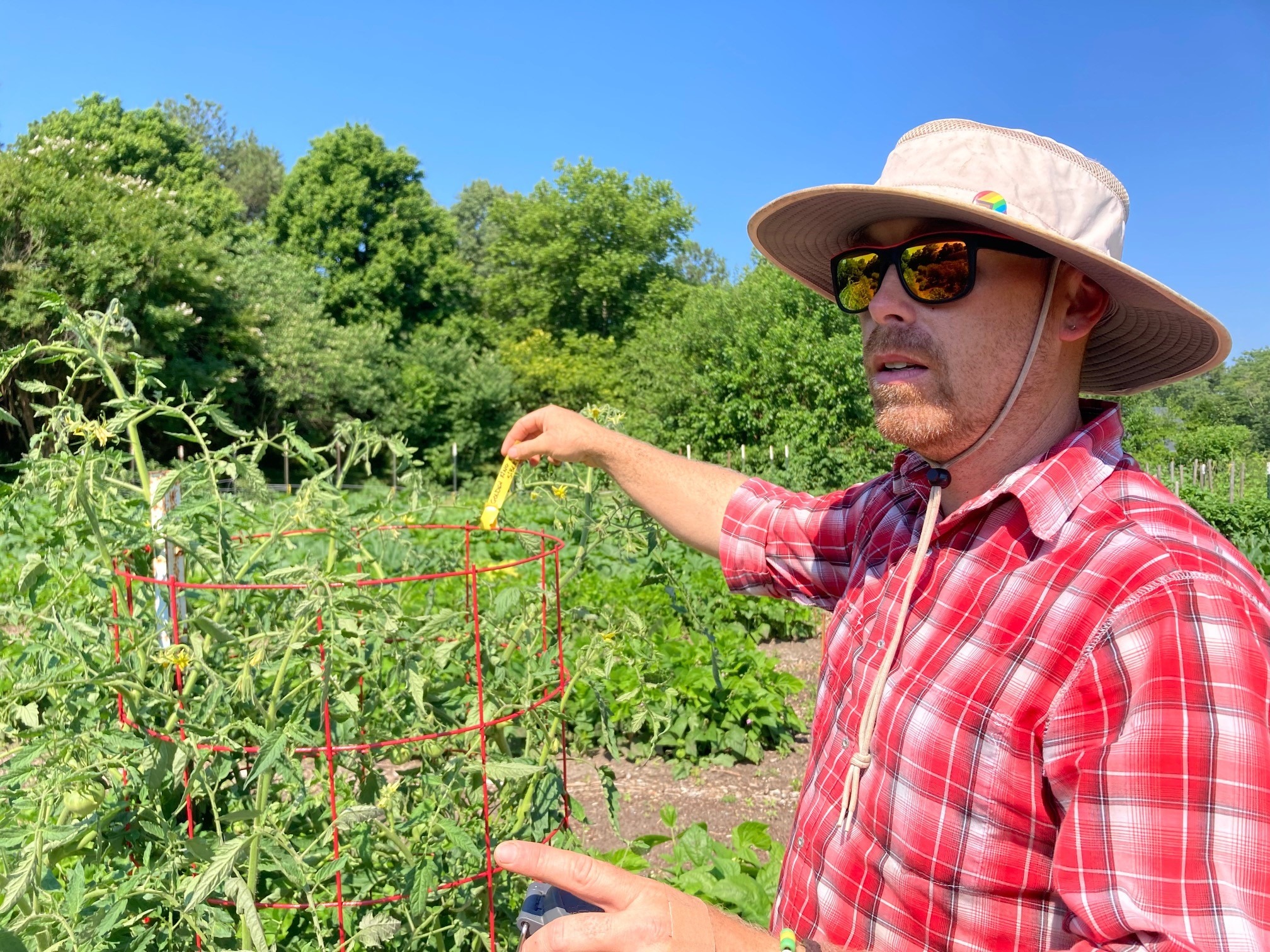 Mikey Partusch planted 35 varieties of heirloom tomatoes in alphabetical order and labeled each one carefully. He’ll save seeds from each to share with the community and so we can plant our favorites again next year.

For Partusch, after years as a Children’s Garden Educator and horticulturist at Cheyenne Botanical Gardens, working in the Community Kitchen Garden is an easy segue. It also explains why he has transformed this space into an interactive learning garden, as well as a production garden. And we can thank the Cheyanne Botanical Garden for those 35 varieties of heirloom tomatoes. They were clearing out a collection of heirloom seeds, and, wanting to do something meaningful with them, Partusch brought them along when he moved to Richmond. 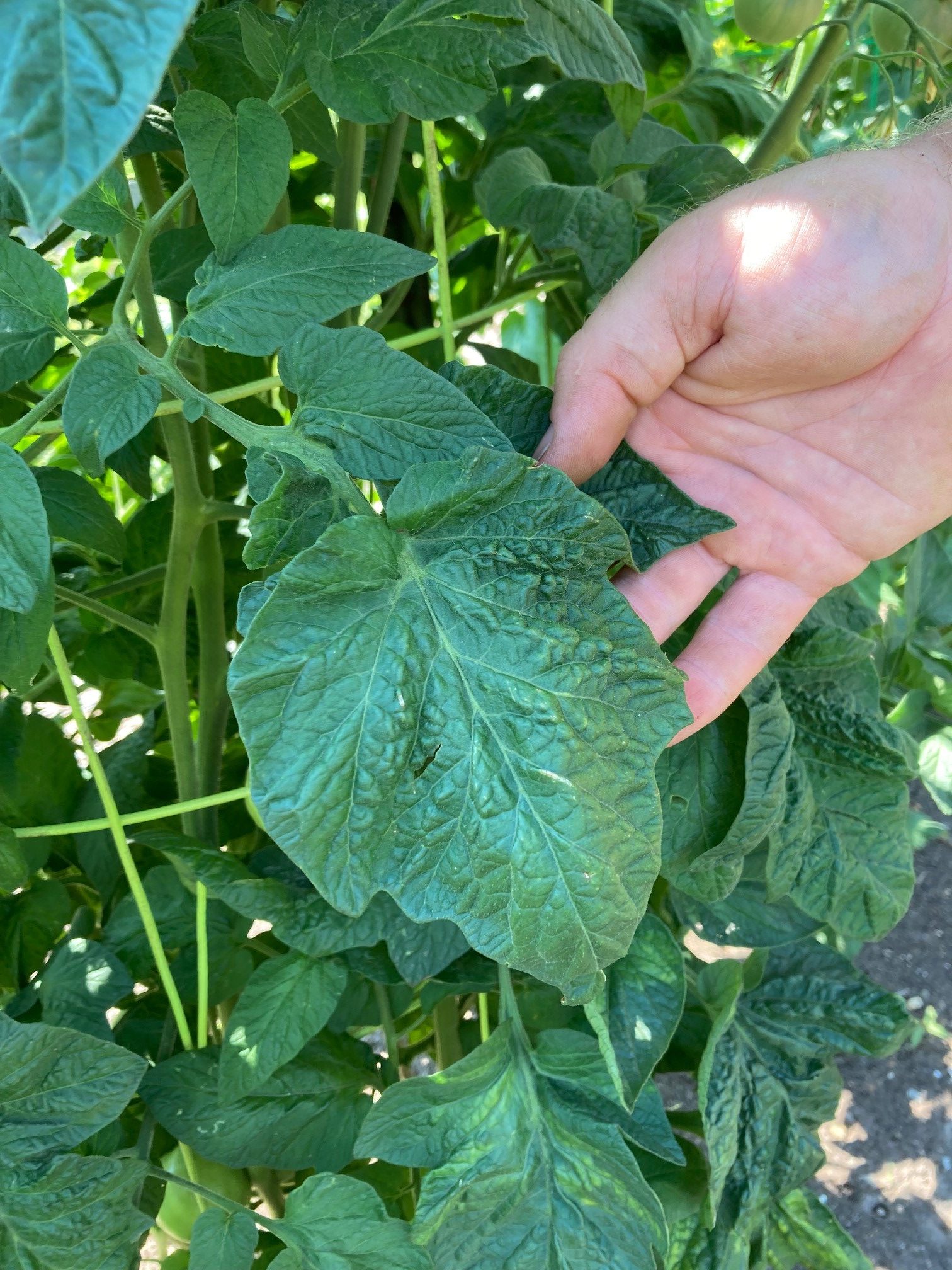 The leaves of the heirloom ‘Brandywine’ tomato look a bit like potato leaves. Tomatoes are cousins to the potato; this variety shows it more than others.

“I picked the widest variety of colors and locations I could when choosing them,” Partusch says. So that means we have heirloom tomatoes from as far away as Australia, Russia, Ukraine, Mexico, Nepal, Italy, Germany, Peru, New Zealand, and China. Domestically, we have tomatoes native to Iowa, Montanna, California, Washington, North Dakota, Minnesota, Connecticut, Pennsylvania, West Virginia and Tennessee. Amazingly some are so rare they haven’t been grown by anyone in years!  The color of the tomato fruit range from white to yellow to orange to purple, and even black. We’ve got pear tomatoes, cherry tomatoes, beefsteak-like giant tomatoes and even one that grows like grapes in clusters! Many of these plants are unique specimens. For example, the giant Aussie tomato has fruit weighing over 2 lbs.  The Coyote tomato from Mexico has tiny current-like ivory-colored fruit. The German Reisetomate looks like a bunch of cherry tomatoes fused and the idea is that you can pull off the ripe part and the rest can stay on the plant. 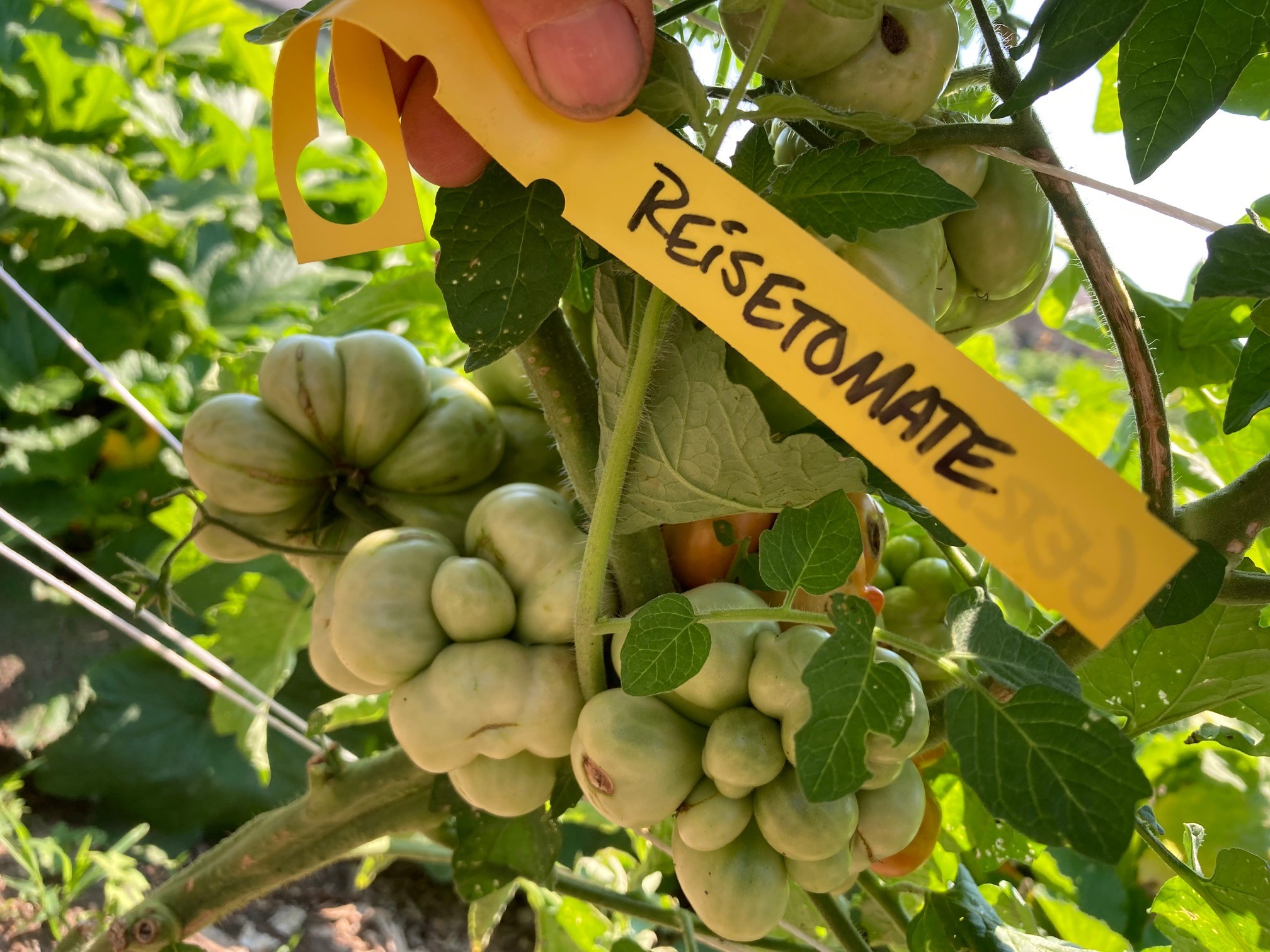 Heirloom tomato Reisetomate looks like a bunch of cherry tomatoes fused and the idea is that you can pull off the ripe part and the rest can stay on the plant.

Partusch will save the seeds from these heirloom tomato plants and put them in the Lewis Ginter Botanical Garden Seed Library for others to use at the end of the season. The goal is to spread these heirloom tomatoes far and wide.  He is also growing 10 varieties of hot peppers, including cayenne, Thai and lemon drop peppers, along with the uber spice hot paper lantern at 350,000 – 400,000 Scoville units (twice as hot as a habanero).

The zucchini he planted is a classic heirloom summer squash, ‘Cocozelle.’ When I asked about the oversized zucchini, Partusch explained it’s not really a problem when it gets so big, as it is for traditional zucchini.  Although some were nearly two feet long, he says it won’t get woody. “You can make zucchini bread with it or slice it open lengthwise, scoop out the seeds, and stuff it with herbs, rice, and cheese.” 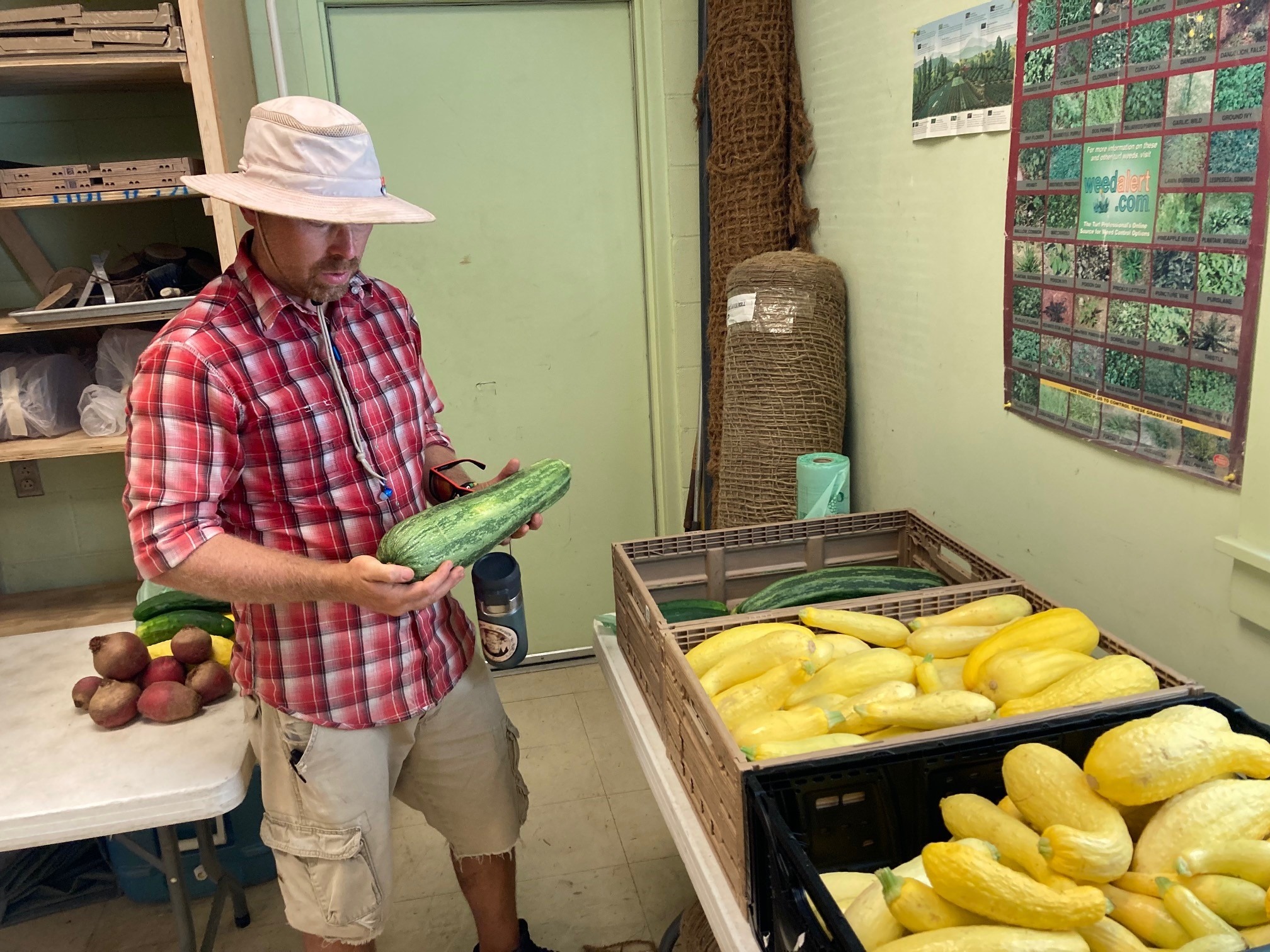 Classic heirloom summer squash, ‘Cocozelle’ can be large without being woody. 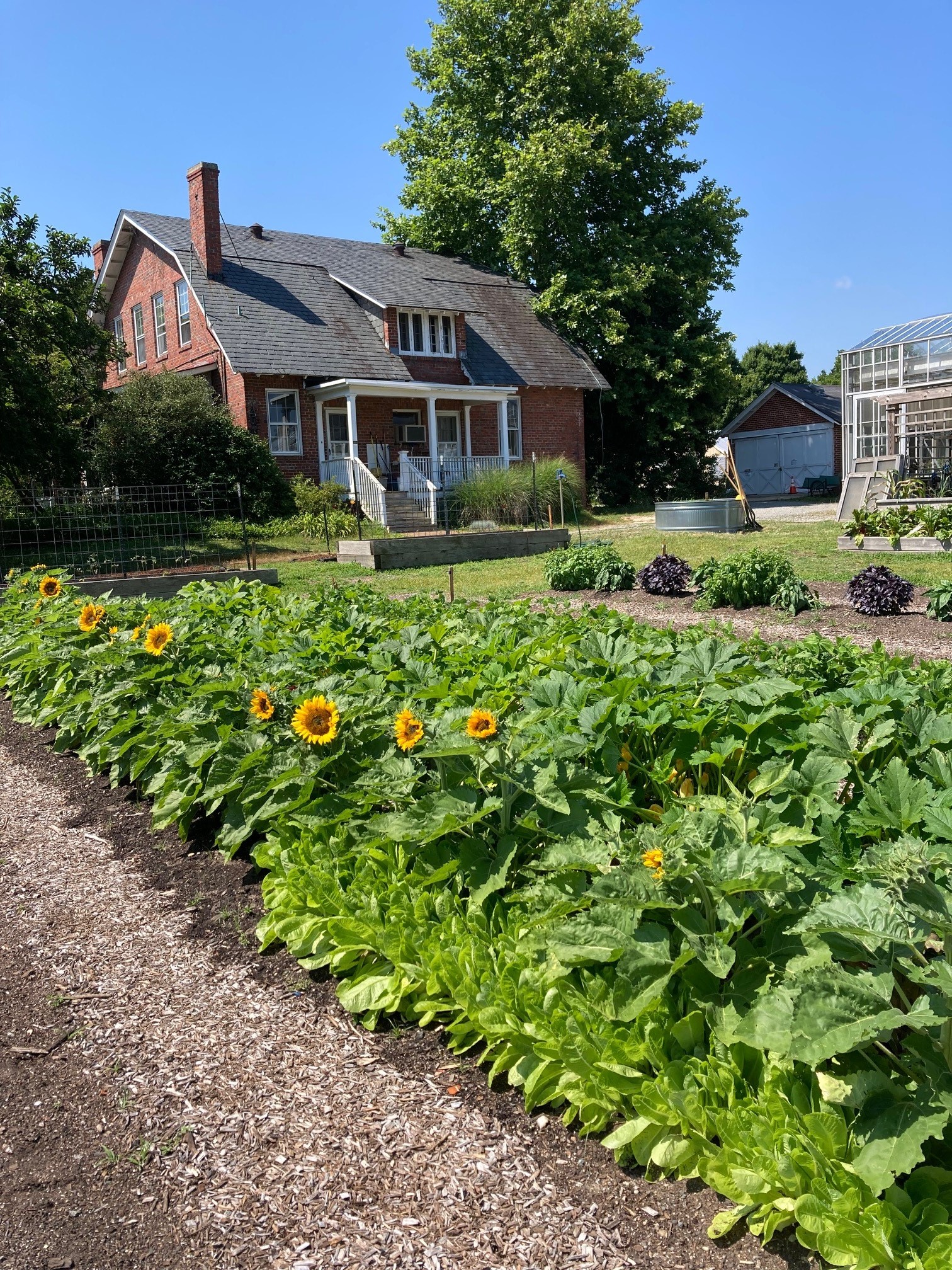 Partusch uses creative solutions in the Community Kitchen Garden. Here you can see mini-sunflowers shading lettuce from the midday sun.

As stewards of the land AND the people, we are trying to help; we don’t use pesticides in this garden. “We don’t spray here because these vegetables are for old people and kids, and we have a responsibility to grow organically and not spray,” he says because they are vulnerable populations. That means before planting, the soil has to be in good shape. We have added plenty of additional compost and Plant-tone, organic granular fertilizer once each spring and fall. Because of this system, the plants will develop healthy root systems.

“The most rewarding part of this is it makes people smile when they see all that we’ve done back here,” Partusch says. “It used to be compost, stick pile, overgrown field and gravel parking lot on the way in each morning. On the way out, it was the reverse: gravel parking lot, overgrown field, stick pile and compost.” But now, this space is a thing of beauty. He’s added in so many flowers, not just because they are beautiful but because they attract pollinators. Partusch waves at everyone who drives by the “Back 40,” as the staff calls it. After all, why not bring a bit of joy and community everywhere you can? 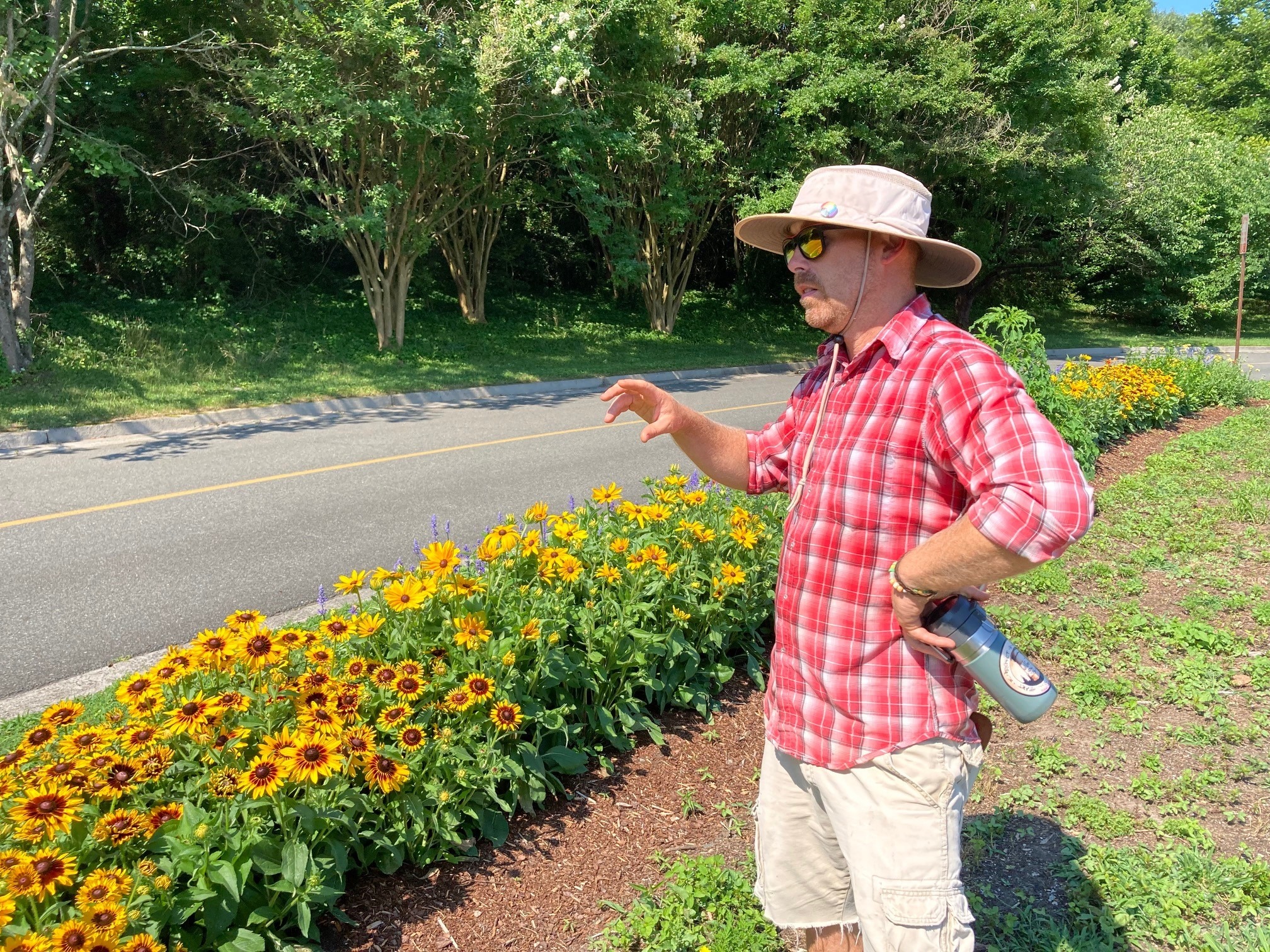 Many of our staff use the back gate of the Garden for their comings and goings at work, an area that goes right by the Community Kitchen Garden. “The first week I was here, I said, I need to post something beautiful there,” Partusch says.