It’s a Small World Once Again 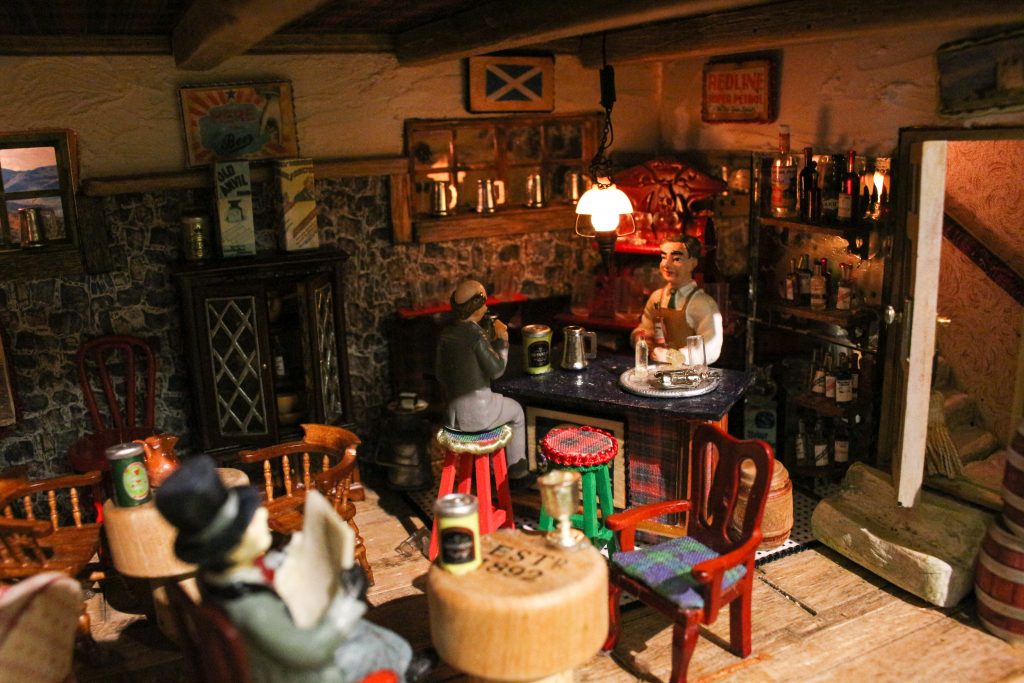 A pub in miniature by Margaret DeWitt. Love those bar stools! Image by Phuong Tran.

There’s great joy across the land at the return of our biennial dollhouse exhibit in the Lora Robins Library at Lewis Ginter Botanical Garden.  People are crazy about miniatures. Tiny chairs, tiny sinks, tiny dogs and cats and cars. What is so appealing about tiny, yet everyday things? The desire to live in another world attracts all ages to the world of miniatures. For some it is recalling happy times and travels, or the toys we played with as children. Miniature building offer an outlet for creative urges without requiring huge space or being outdoors in the heat or cold. 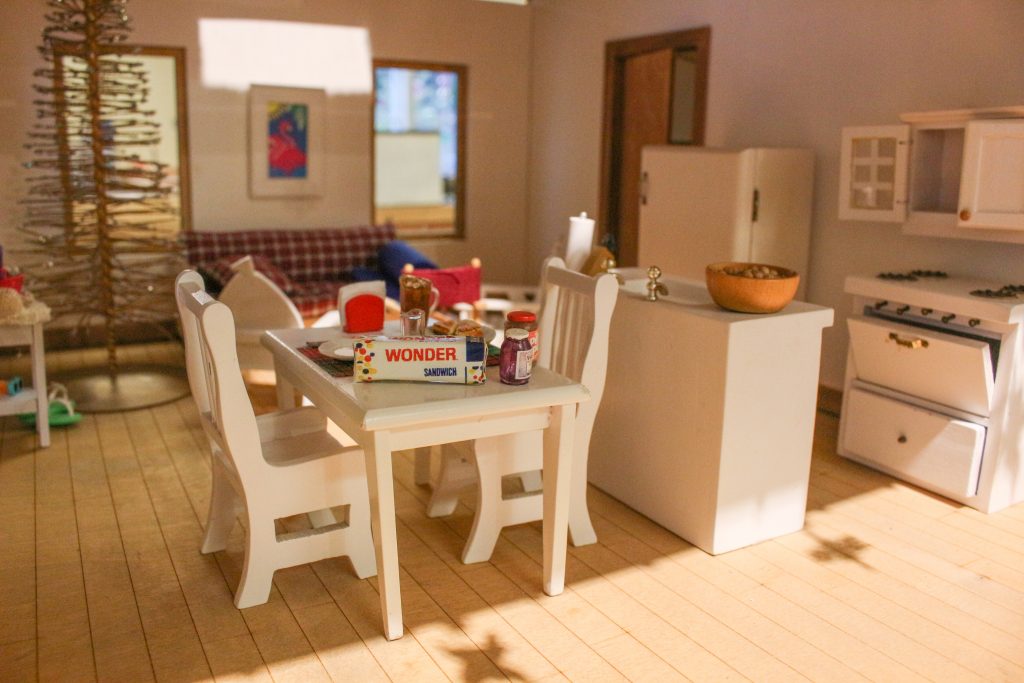 Like a time capsule, miniatures capture the true essence of a time period, in miniature. Image by Phuong Tran.

Our 20 exhibitors offer 42 structures to please your imagination. Their offerings range from very large houses to small, single room scenes and represent all kinds of motivations to create. Margaret Dewitt built a tavern scene that reminds of her Big Meadows Lodge on the Skyline Drive and family visits. She created the stones for the fireplace and included a turkey roasting over a burning fire. Ellen Shaver likes to recreate lost (or decaying) commercial buildings. She’s created two Richmond buildings: the Triangle Filling Station from Church Hill and another filling station from Jackson Ward. Shaver also created the Zep Diner, a Los Angeles landmark, a Shell station from North Carolina, and the Fish Inn, a quirky fish-shaped structure that really existed. 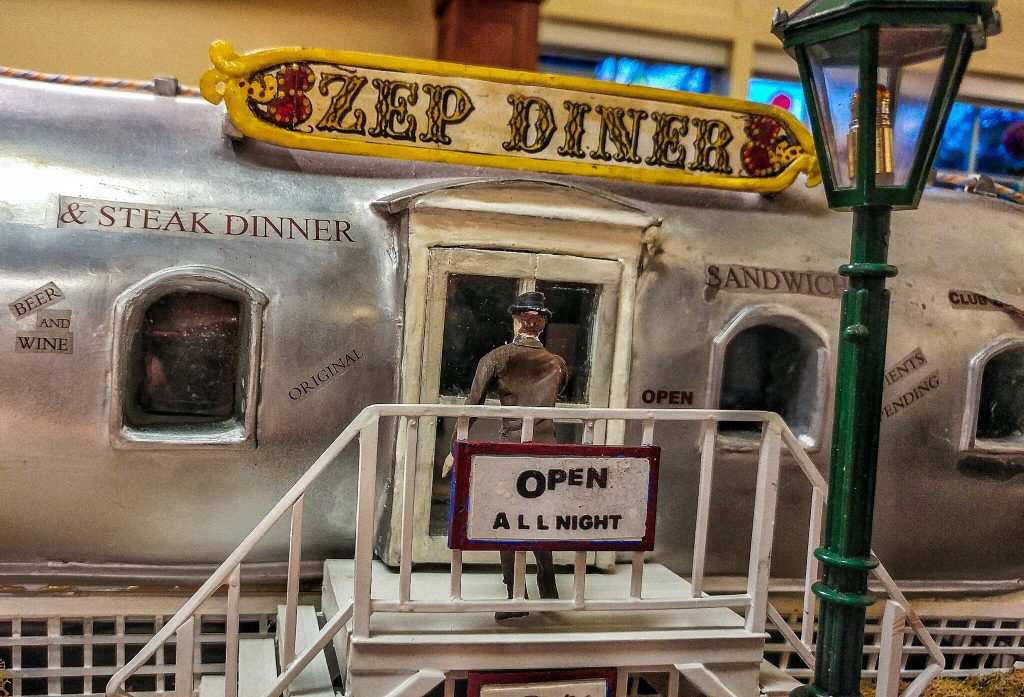 Family connections and grandchildren are strong motivators for our exhibitors. Suzanne Spooner-Munch has on exhibit the Grand Rapids house, built by her grandfather in 1932, and lovingly repaired and renovated be her. Several generations of Spooner children have loved the dollhouse which is now furnished with a mix of 1930s wooden furniture and 1950s plastic furniture. Suzanne has added some Richmond touches to her house, look closely to find them. Mary Lou Pawson created an embroidered dollhouse for her grandchildren, needing 3 ½ years to complete it. The dollhouse has eight modular sections and is constructed entirely of plastic canvas and worsted yarn. Barbie and Ken, and their offspring are the current residents. 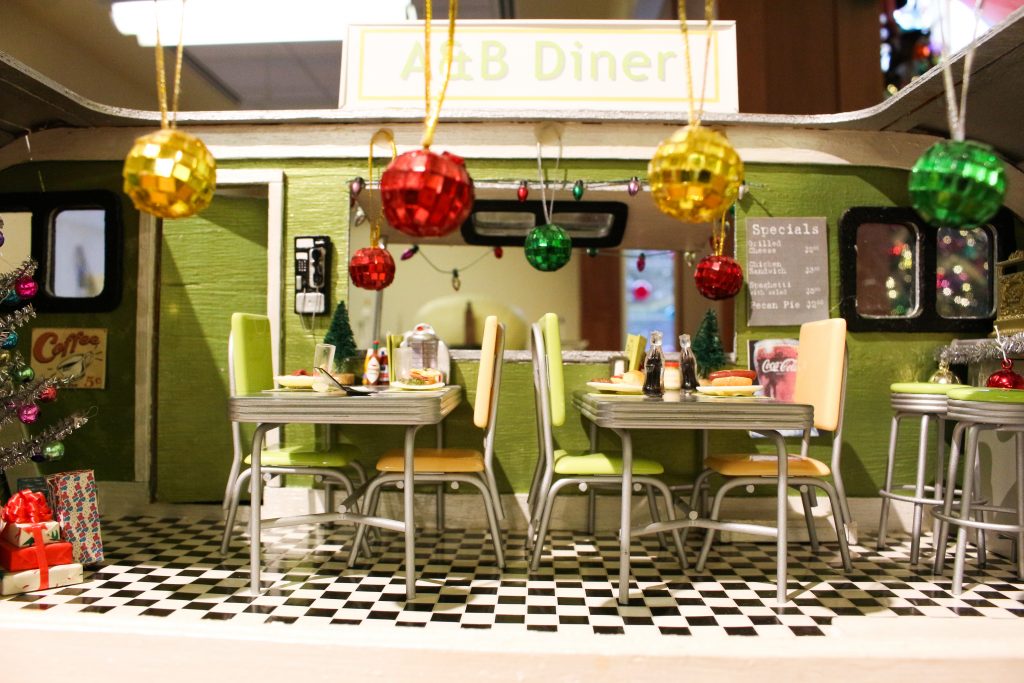 The A & B Diner in miniature! Image by Phuong Tran.

Anita Waters created the very popular A&B Diner with her son Alan as he recovered from chemotherapy. Alan Waters directed her as she styled the 1950s diner complete with tiny hot dogs and hamburgers. Anita Waters went on to create Alan’s Auto Center in memory of her son who had an interest in auto mechanics. The Auto Center is so realistic you might want to take your car there for an oil change! 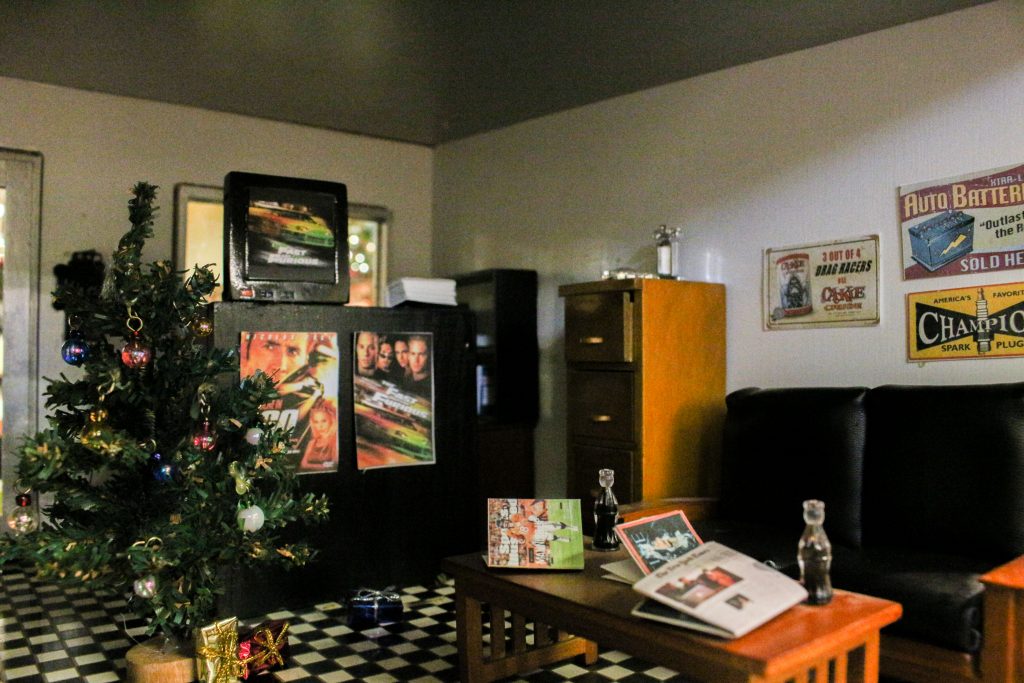 Could it be a “man cave” at Christmastime? Image by Phuong Tran.

Some start very young to create small worlds. Jennifer Burk’s parents gave her a dollhouse built from a kit and her desire to build began with that. She worked at a toy shop after high school and built and collected furnishings then. Burk’s exhibit of several structures is called “Burkville” (named by the Garden curator!) and includes the Dump House, rescued from a dump and the Blue House, her first wiring project. Others begin their miniature careers later in life. Irwin Sherman created her Christmas scene at age 80. Her daughter, Nancy Burton, embellished the scene and is sharing it for the first time with us. She plans to bring her now 93-year-old mother to see the exhibit. 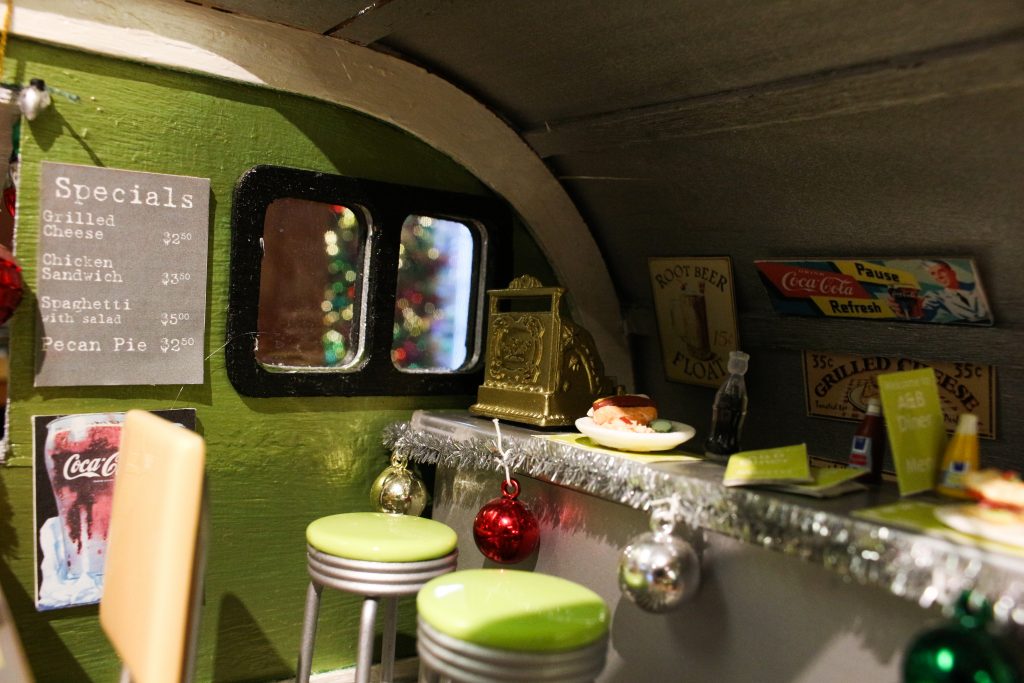 Interior of the diner when Grilled Cheese was still $2.50 – A&B Diner by Anita Waters. Image by Phuong Tran.

First-time exhibitor Marian Kavanagh has been creating dollhouses since 1973 and has made 19. She offered for our exhibit two creations made from old wooden boxes. One of her structures is the home of a world famous coffee purveyor. Another first time exhibitor, James Creech, will display his first miniature creation, a Christmas market stall. First-timer James Opher created a country church that reminds him of Sundays spent with his preacher mom who would visit three churches each Sunday.

At least two of our houses have seen military action when the residences morphed into army forts. “Jerry’s House,”exhibited for the first time by Anita Waters, is a large colonial home built by her friend in 1990. Along the way, a granddaughter used the house for her army men and they would enter into combat from time to time. Anita has restored the house to its more pristine past. Susan Davis’s metal 1960s house also served as a G.I. Joe fort. Surprisingly, the original furniture survived and is on display. 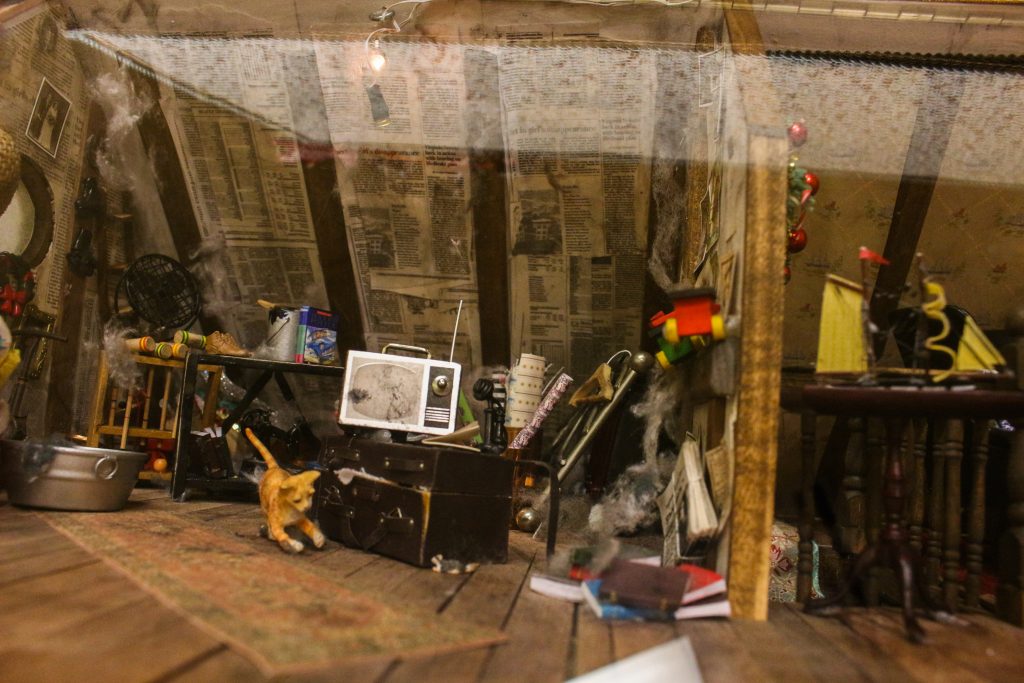 One of my favorites is the bake shop created by Betty and Paul Schiess. Betty Schiess created tiny cakes and pastries using polymer clay. The shop is colorfully decorated in shades of pink and is lighted so it spreads a warm glow out onto the “street” where passersby can take their time selecting which treat they’d like to purchase. 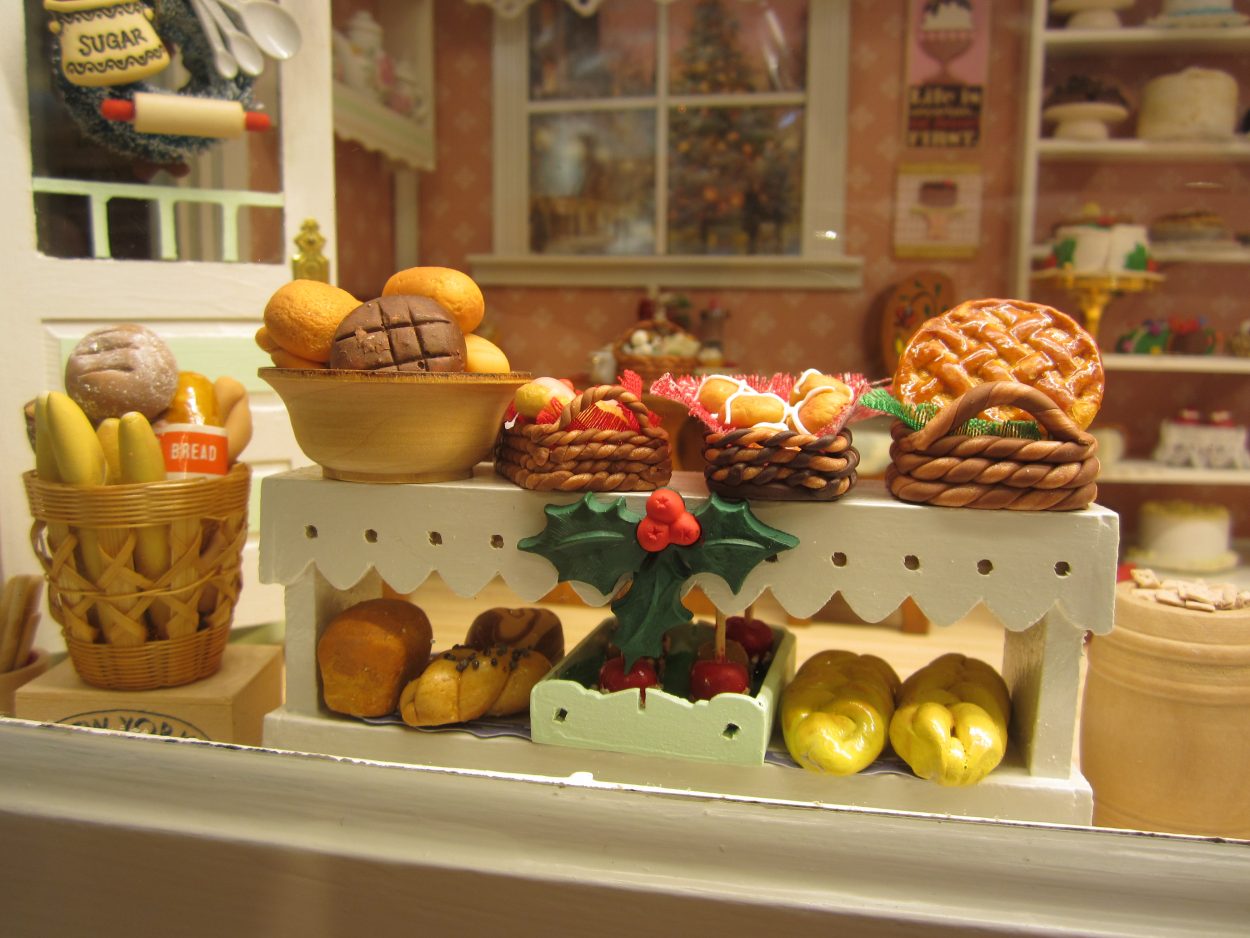 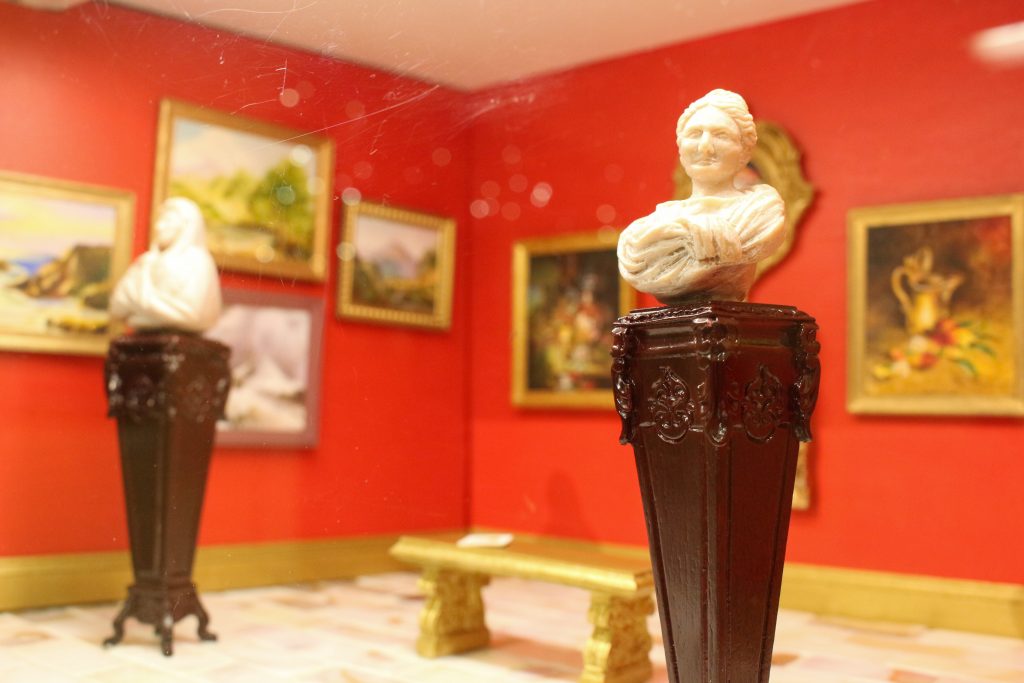 Could it be? Even an art gallery in miniature!  Created by Ann Marlowe Tate.  Image by Phuong Tran.

Dollhouses at Dominion Energy GardenFest of Lights are a biannual exhibit. They will be at Lewis Ginter Botanical Garden again in 2018-2019.