Our Dirty Dozen plant of the week is Japanese honeysuckle (Lonicera japonica). This ornamental vine is still widely available in the horticultural trade, even though it has invaded all of the eastern United States (as far west as Texas) and caused considerable damage to native ecosystems. 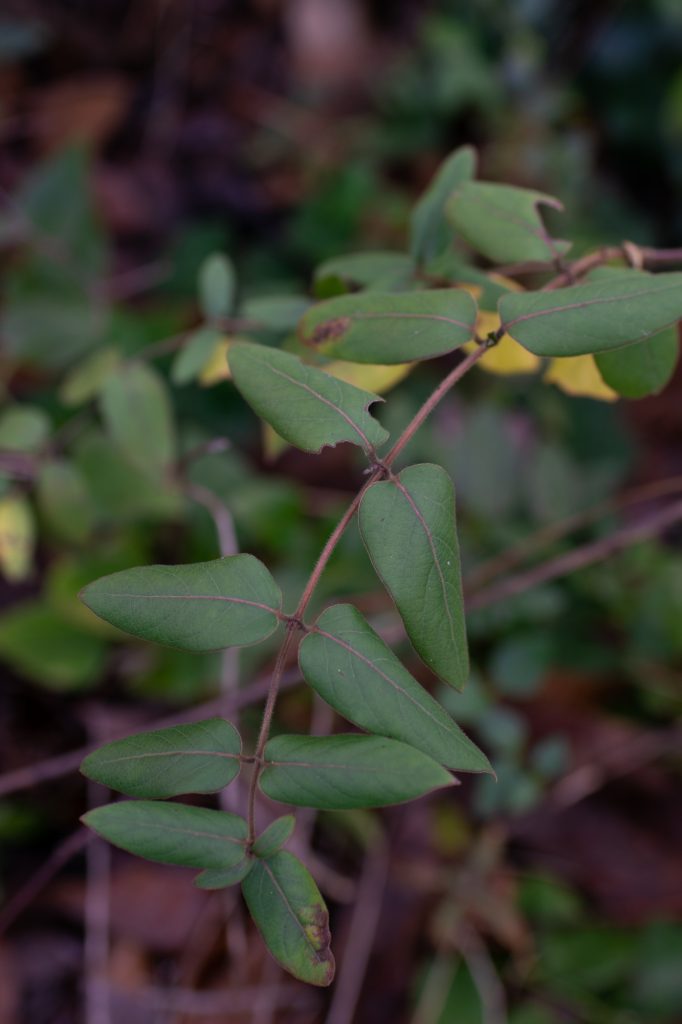 L. japonica has simple, opposite leaves. Image by Nicole Plummer.

Lonicera japonica is a member of the honeysuckle (Caprifoliaceae) family. Evergreen to semi-evergreen, the leaves of Japanese honeysuckle are usually present year-round in Virginia (PDF). Leaves are 1.5 to 3 inches in length, and vines can grow up to 30 feet. Fragrant blooms, which change from pale pink to cream-yellow as they mature, begin in late spring and last through summer. During fall, L. japonica produces black berries containing 2 to 3 seeds.

L. japonica was introduced to Long Island, New York, in 1862 (PDF) for ornamental purposes. It is originally from eastern Asia, but it has been cultivated in the U.S. for aesthetic reasons, erosion control and wildlife forage.

Geographic Region: L. japonica is listed as a high-risk invasive species (PDF) for all of Virginia. This map shows that it currently threatens plant communities in the East Coast, Midwest and Southwest.

Habitat: When we disturb native ecosystems (PDF) by constructing roads and buildings, logging and farming, we often pave the way for invasives like L. japonica. Aside from disturbed areas, it invades both forest floors and canopies, as well as wetlands.

What is the Impact of Japanese Honeysuckle on the Environment?

Japanese honeysuckle grows very quickly and easily escapes cultivation. It competes with native vegetation both aboveground (by twining around trees and shrubs) and belowground (by sending out runners, or stolons). L. japonica is notorious for “stealing” sunshine, which then stifles the germination and growth of other plants (PDF). As mentioned before, it also damages tree trunks (PDF) and can even cause tree and shrubs to collapse under the weight of the vines. 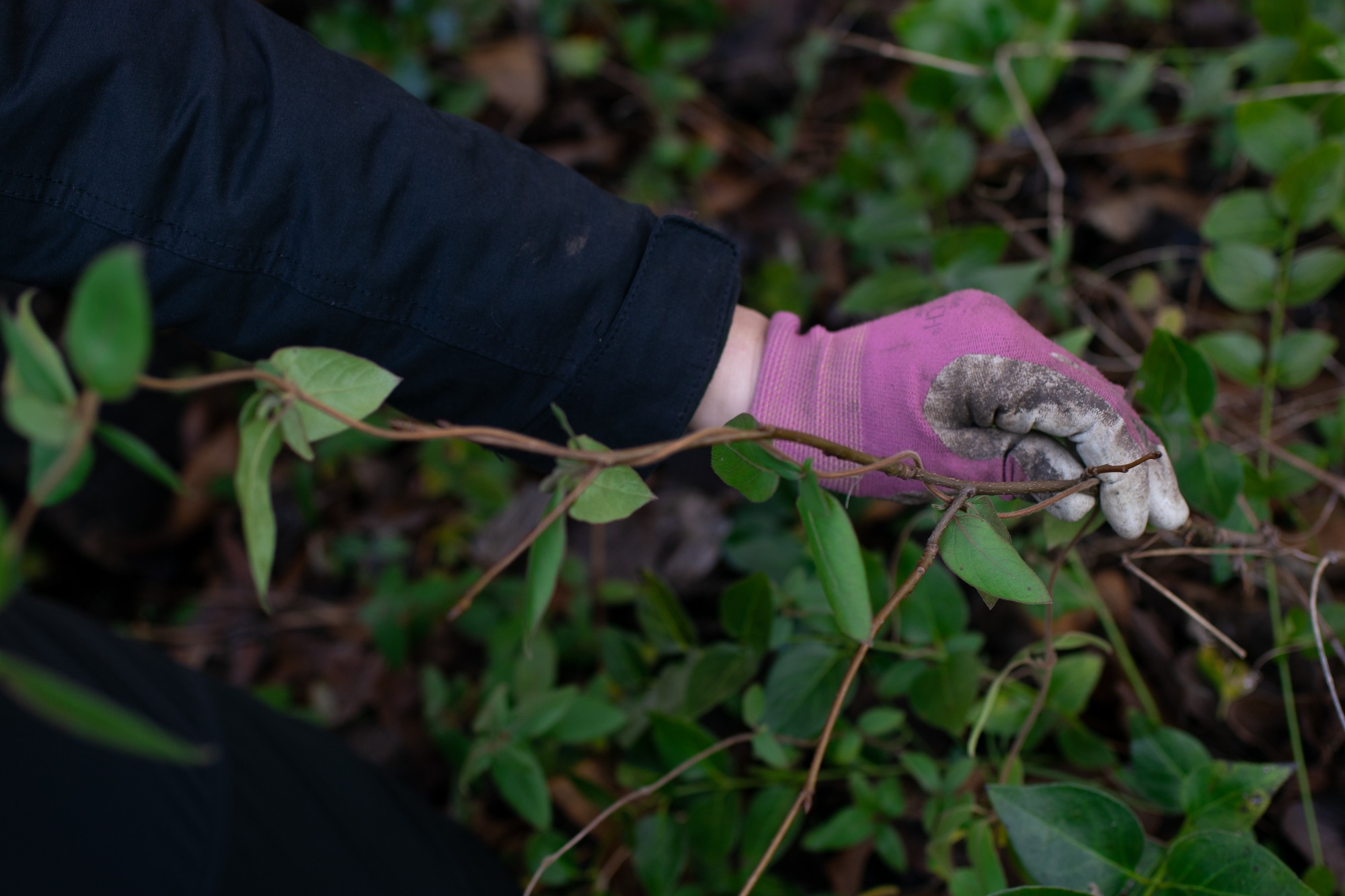 L. japonica is a twining vine, or bine, meaning that it spirals around other vegetation. 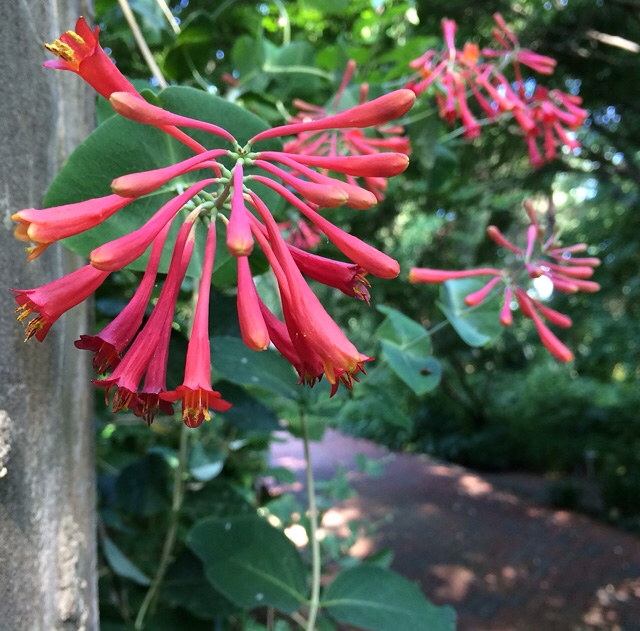 Plant this, not that. The native honeysuckle Lonicera sempervirens grows near the entry columns on the back road near Flagler Garden. It’s a great alternative to Japanese honeysuckle.

Prevention: Of course, the best thing to do is simply not to plant this species! Plant native honeysuckle instead or see our suggestions below for more alternatives.

Mechanical: Small infestations can be removed by hand (PDF) or using a shovel or hoe. Be sure to remove all roots or else it may resprout. Pro tip: This is easier to do when the soil is moist! Mowing or line trimming is a short-term solution for preventing L. japonica from shading out other plants, but you will still need to dig up roots eventually.

Fire: For larger infestations (such as fire-adapted forests), L. japonica can be controlled using prescribed burns (PDF). This should always be done by a professional, and we do not recommend this as a way to manage small populations in your own backyard.

Biocontrol: You may want to consider using goats as form of biological control. They are known to reduce L. japonica densities (PDF), but you will still need to dig up roots or continue to bring the goats back in following years due to this vine’s ability to resprout from root fragments.

Chemical: If you are dealing with a large infestation in which mechanical methods or prescribed fire are not safe or practical, the use of herbicides may be necessary. Like with Chinese privet, the Virginia Department of Conservation and Recreation (PDF) recommends applying glyphosate to foliage in late fall, after most other vegetation is dormant or dropped leaves. You will need to reapply it in the following years to treat any that were missed, though small seedlings should be removed by hand if possible. Please use herbicides responsibly, which involves following all labels. For further guidance, ask your local Virginia Cooperative Extension office. 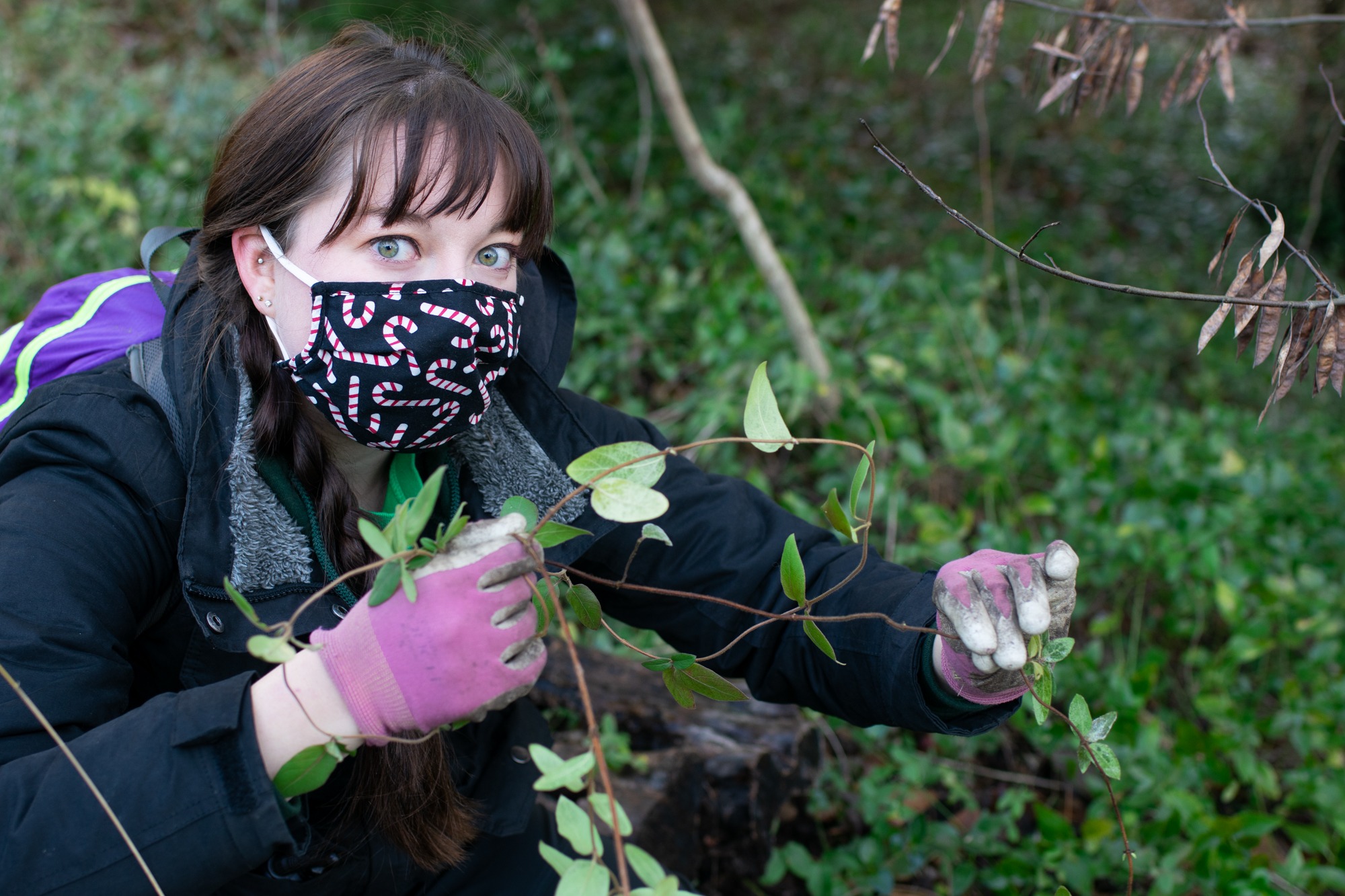 There are several other vines that have pretty, fragrant blooms but are native to Virginia’s Capital Region (Richmond). You may want to give the following plants a try: crossvine (Bignonia capreolata), Carolina or yellow jessamine (Gelsemium sempervirens), purple passionflower or maypop (Passiflora incarnata), Virginia creeper (Parthenocissus quinquefolia) and of course our native coral honeysuckle (Lonicera sempervirens). Moths, butterflies and ruby-throated hummingbirds love coral or trumpet honeysuckle for its delicious nectar (PDF). If you notice a nursery still selling L. japonica, you might ask them to stop and instead sell these native vines—both you and our pollinators will benefit! 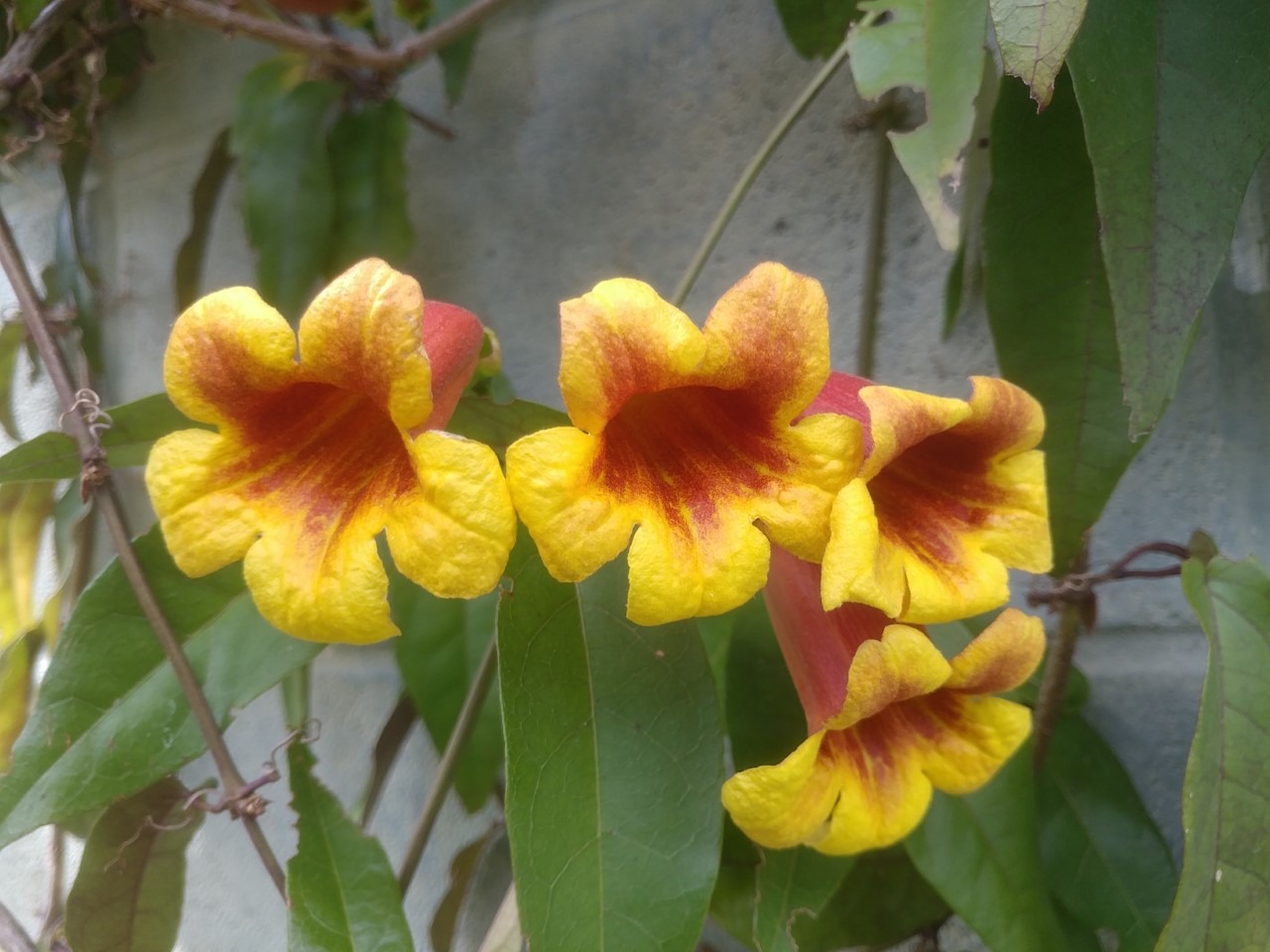 Crossvine (Bignonia capreolata) is both beautiful and native, making it a great substitute for Japanese honeysuckle. Image by Laurel Matthew.