Pitcher plants are hungry for change. 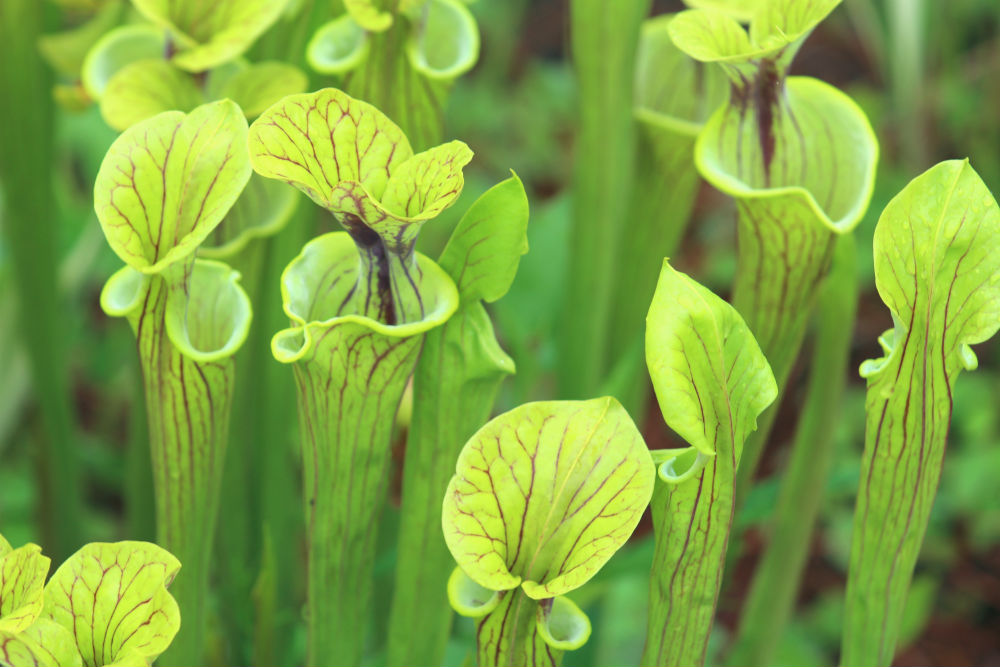 Sarracenia flava x alata ‘Lemon’ definitely seems cheerful on rainy days. Pitcher plants in general prefer high sun and a moist environment. They don’t want to be fertilized and they thrive well on a combination of peat moss and sand. The “pitchers” are actually modified leaves that mimic flowers to attract insects.

If you venture out to the West Island Garden, chances are that you will run into some spectacular-looking Sarracenia, commonly known as pitcher plants. To me, they are utterly fascinating–from their deeply-folded leaves and colorful veins to perching lids and pinwheel flowers (Yes, they do flower and flower beautifully). Sarracenia look to me as if they were sent here to Earth as ambassadors from a faraway planet, all jovial and ready to have fun. Whenever I pay them a visit, they salute me with their bright colors and then resume the leisure activities of brewing insect tea and chilling by the water’s edge. 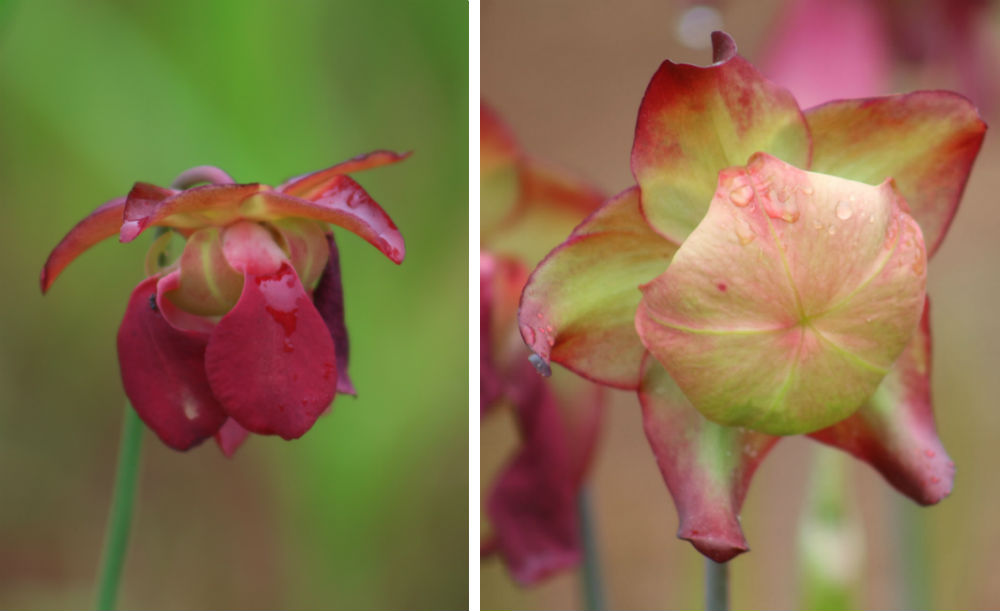 The flowers of pitcher plants start out drooping down and slowly rise up to greet the sun. Pitcher plants hybridize easily, so Laurie McMinn, the horticulturist for the West Island Garden, always cuts off the flowers before the pollen ripens to prevent hybridization — an important part of maintenance.

What a relaxing life! You would think. But, don’t be mistaken. While the pitcher plants at our Garden are quite happy, the rest of their family in the wild is suffering from habitat loss — at an alarming rate. According to the International Carnivorous Plant Society [ICPS], approximately 95 percent of the carnivorous plant wetland habitat in the U.S has been irreversibly developed by humans. That stark number means that nearly all the places where our pitcher-shaped friends once lived are now filled in to create roads and parking areas, housing and commercial developments or agricultural areas.  In 50 years, we have already lost almost all of our pitcher plant heritage. And at this rate, I don’t even want to think about what might be left 50 years from now …

But there is hope. Part of our mission at Lewis Ginter Botanical Garden is to advocate for the environment, and our Garden is dedicated not only to conservation, but to teaching others about how they can make a difference in their community. Responding to the threat that Sarracenia faces, we’ve identified our Sarracenia collection, which started in the early 90s, as one of five collections to further develop. “We already have a well-established collection here at the Garden, one of the best on the East Coast,” said Horticulture Director Grace Chapman. “They grow well here and carry a great educational message. It is a collection that speaks to our mission.”

Because of our great habitat for these plants and our commitment to conservation, we were selected to receive a very special gift from Adam Sforza, an avid hobbiest grower of North American pitcher plants as well as a grower for the North American Sarracenia Conservancy, who has been caring for rescued pitcher plants in areas under development. He donated to us 20 plants of Sarracenia rubra ssp. alabamensis and another 20 of Sarracenia rubra ssp. jonesii, which he grew from seeds obtained from the ICPS as part of the Sarracenia Distribution Program in 2008. Both varieties are listed in the Endangered Species Act and are extremely rare (read, they can only be found in 10 – 23 sites across the world!). Horticulturist Laurie McMinn has just planted all these pitcher plants in the West Island Garden and I can’t wait to see them growing  up strong and straight in the years to come. 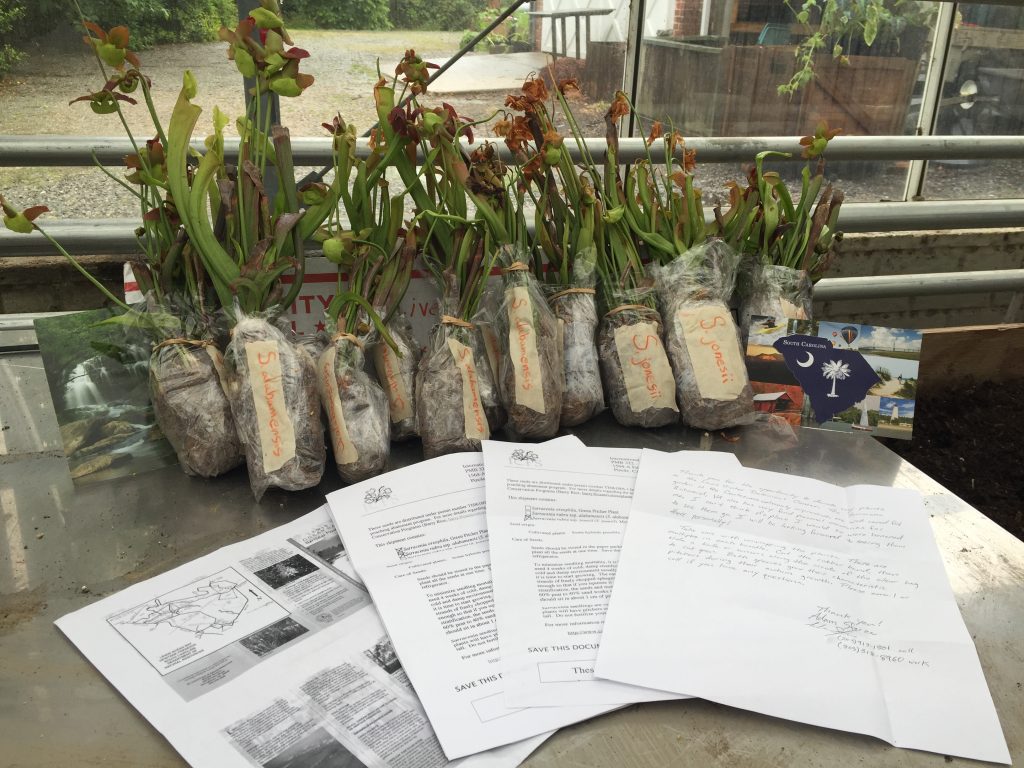 Adam Sforza, a grower for the North America Sarracenia Conservancy, generously gave to our Garden 40 rare Sarracenia plants, which he grew from seeds obtained from the ICPS as part of the Sarracenia Distribution Program in 2008.

Currently, we have 20 types of Sarracenia in our collection, six of which are native to Virginia.

We are also a long-term partner with the World Organization, a nonprofit committed to preserving endangered species, and received six cultivars from them earlier this month as part of the Sarracenia Distribution Project.

We seek to acquire more Sarracenia varieties from Meadowview Biological Research Station, a dedicated carnivorous plant nursery in Fredericksburg that abides by conservation ethics, and continue to grow more pitcher plants native to our home state (there are 17 species native to Virginia).

Partnering with carnivorous plant horticulturists and nurseries as part of a nationwide Sarracenia conservation movement, we hope to preserve our Sarracenia heritage and prevent people from poaching rare species. Thanks to the ICPS’s Sarracenia Distribution Program, pitcher plant enthusiasts now have a legal way to obtain plants and seeds at various sites from a reliable source, which reduces illegal field collection. The rescued pitcher plants are then put on display at our Garden, where we carry on spreading an educational message about horticulture, conservation, and the science of carnivorous plants.

If you have a child who participates in summer camps or field trips at the Garden, you may already know that we like to teach with these unusual plants. We will dissect the pitcher plants so the children can see what’s inside or send them back with teachers for dissection in the classroom. Discovery programs, such as “Inquiry into Nature” or “Raindrops to Radishes,” offer tours of the West Island Garden where we fascinate the little ones with a variety of plants that develop special adaption to a wet environment. “A lot of them have never seen a pitcher plant before and it’s good to get them to think about natural diversity,” said Kristen Thoroman, early childhood program developer. “The ‘yuck’ factors [of carnivorous plants] really draw them in.” 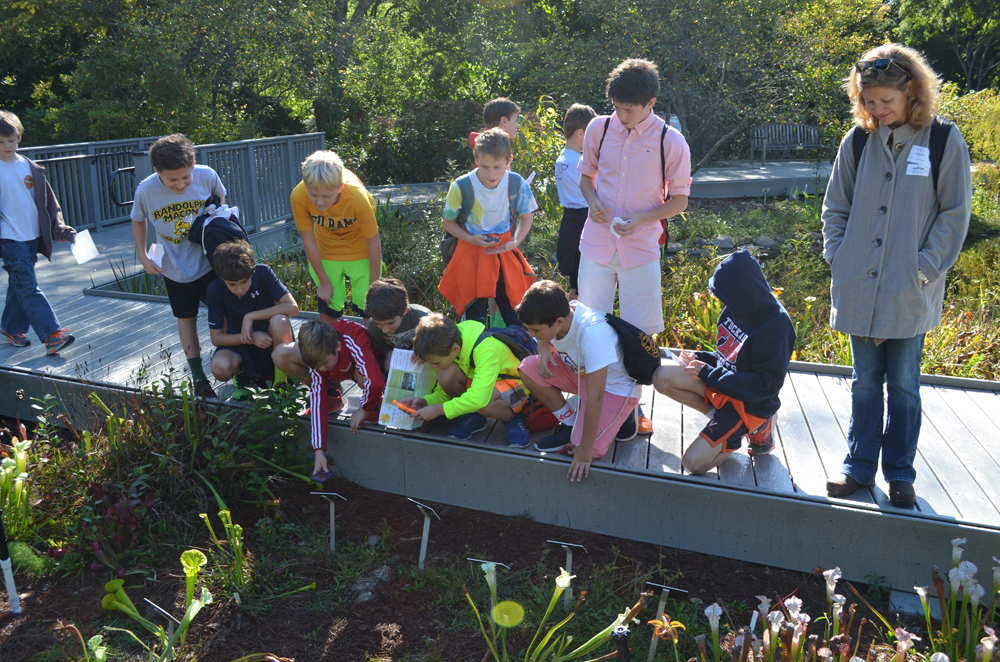 Middle school boys are learning and enthralled by pitcher plants in the West Island Garden on a recent field trip.

During these tours, Kristi Orcutt, Children’s Garden educator, usually tells her wide-eyed students about Phil Sheridan, president and director of the Meadowview Biological Research Station, to illustrate how one person can really make a difference. She shows them how his dedication to the preservation of pitcher plants, which manifests in the Sarracenia nursery and nature reserve he created, only started from a simple wish to rescue a few pitcher plants he found under a power line one day. He was a lone ranger at first in his effort, but slowly and gradually, his determination inspired others to follow suit. Together, they have grown more than 2,000 pitcher plants from seeds and roots taken from other specimens, preserving these remnants of Virginia’s past. Orcutt hopes that stories about committed individuals like Sheridan would instill in the young minds this valuable lesson: A single, determined person can really be the change. 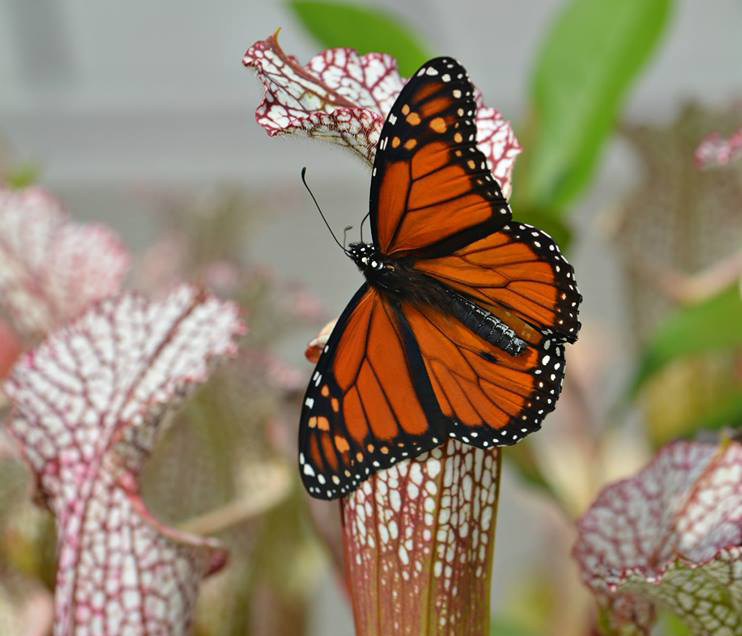 Pitcher plants attract all kinds of insects, even monarch butterflies and mosquitoes. One way you can combat mosquitoes, especially in a swampy area, is by planting pitcher plants. Photo by Garden Member Cathy Hoyt.

Some of the plants at Lewis Ginter Botanical Garden are great references for a good start on your Sci-Fi Garden.

As a water-loving plant, it resides where other plants might not survive, such as near bogs and marshes. Sufficient nutrients are not readily available in the soil of most wetland habitats, so the pitcher plant’s pit-trap adaptation enables it to resourcefully obtain nutrients from insects it takes captive.