For this week’s Dirty Dozen plant, we have a triple threat: autumn olive (Elaeagnus umbellata), Russian olive (Elaeagnus angustifolia) and thorny olive (Elaeagnus pungens). All three Elaeagnus species are invasive, and E. umbellata and E. pungens are already widespread in Virginia (PDF). We invite you to join us in reducing their spread and ecological impact. 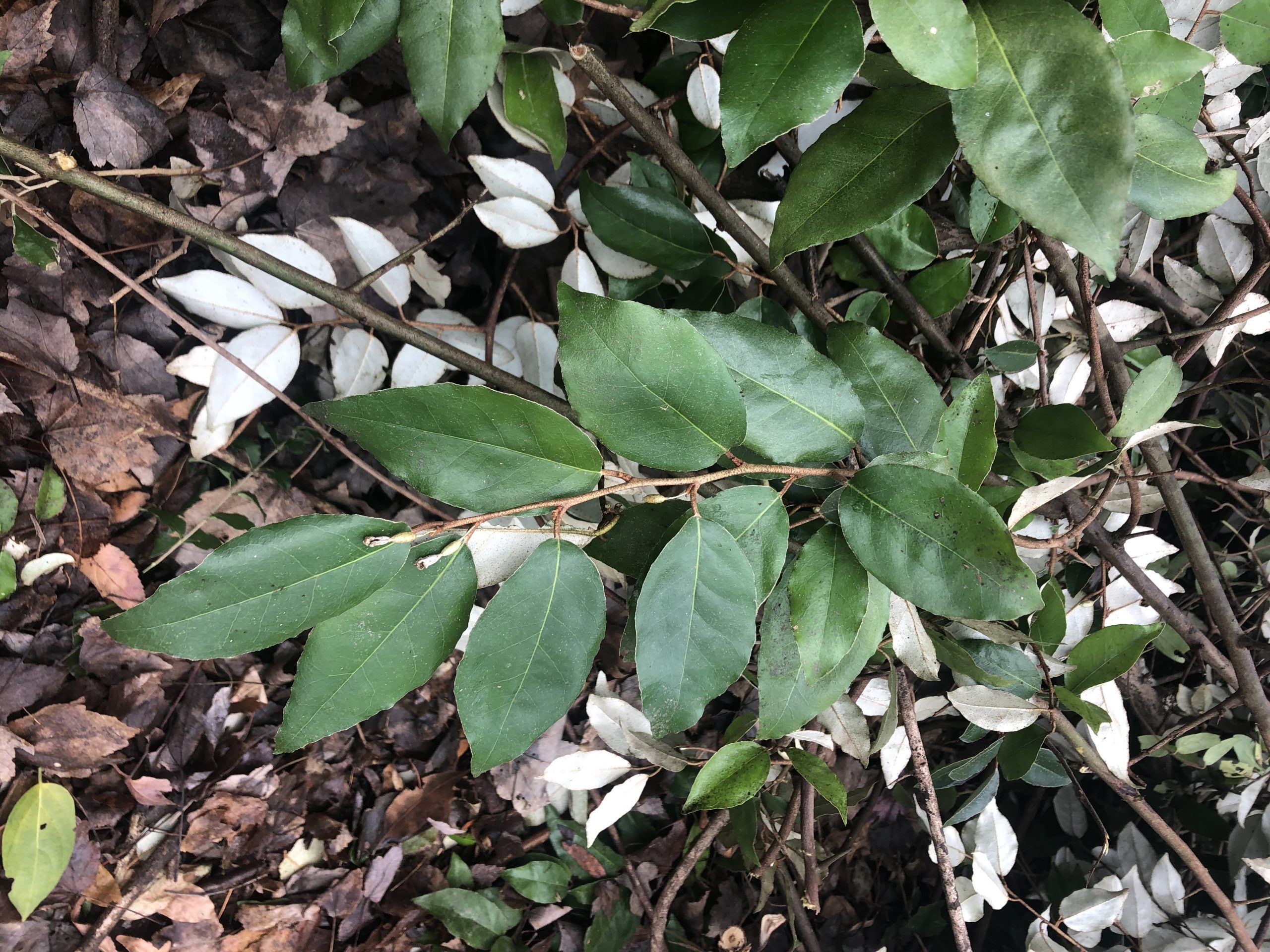 Autumn olive, thorny olive and Russian olive are all members of the oleaster (Elaeagnaceae) family.  Autumn olive and Russian olive are deciduous shrubs that can grow up to 20 feet tall and 30 feet wide and 20 feet tall and 20 feet wide, respectively. Unlike the other two, thorny olive is an evergreen shrub and slightly smaller, reaching a max height of 15 feet and width of 18 feet.  E. pungens and E. umbellata both have thorny branches, which can act like vines by climbing up other large shrubs and trees. E. angustifolia also usually has thorns but has narrower, more oblong leaves than the others.

Elaeagnus was considered beneficial to wildlife because it produces large quantities of edible drupes every year (up to 200,000 per plant). These fruits are even edible to humans, but that’s not a good enough reason to plant them! We don’t recommend eating them (plant identification is a tricky thing and many plants can be mistaken for others) but here’s another reason to be careful: they could contain heavy metals and other toxins if they were grown in former mining sites or other heavily-disturbed areas. 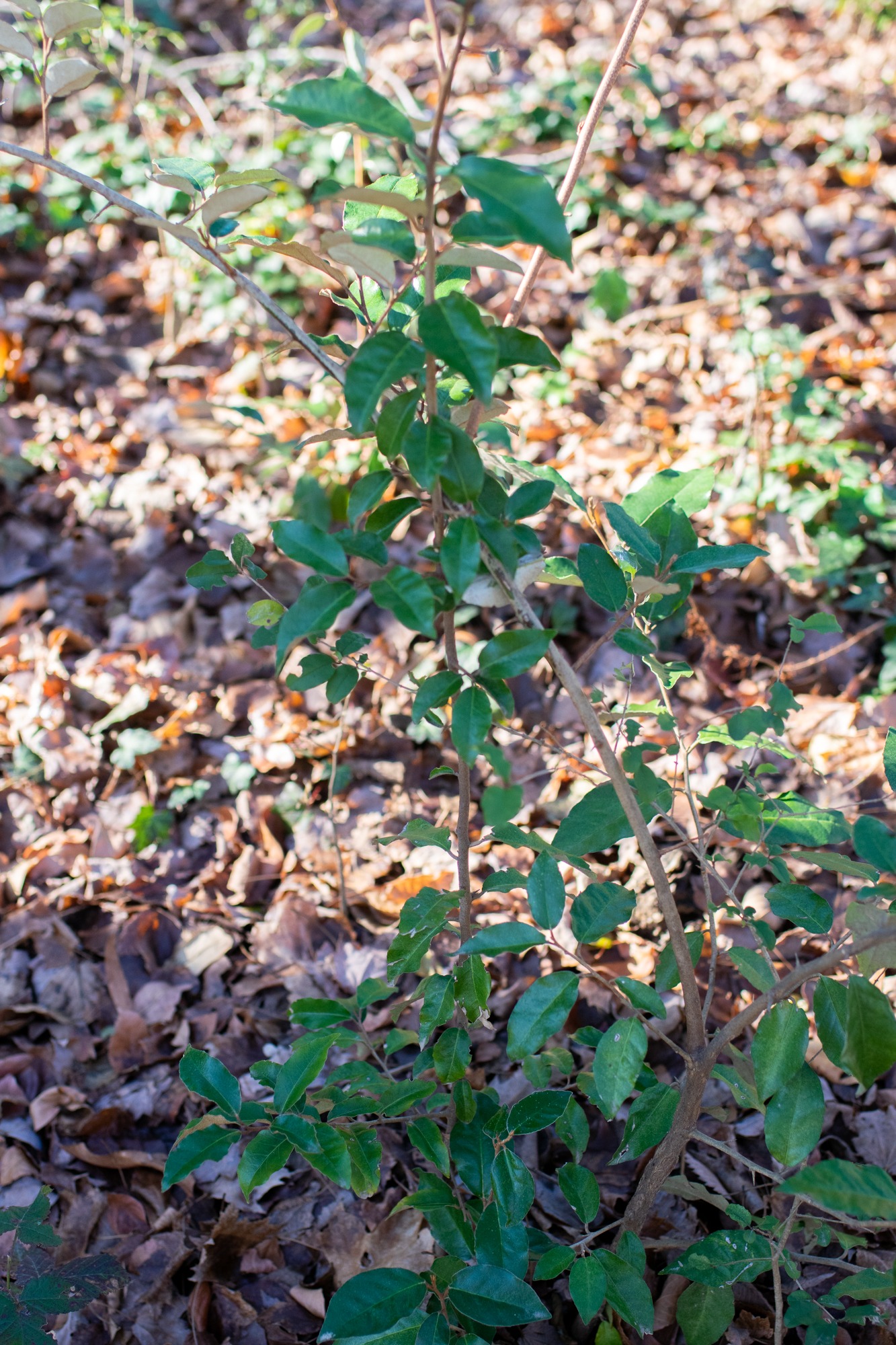 Observe the thorny stem in the upper left-hand corner, hence why it is called “thorny olive.” Image by Nicole Plummer.

How Did They Get Here?

Native to Japan, Korea and China, E. umbellata was brought to the U.S. in 1830 with good intentions in mind: providing food for wildlife, controlling erosion and restoring degraded areas from surface-mining practices. It was also mass-planted by the U.S. Soil Conservation Service in the 1950s for these same reasons. E. pungens was introduced to the U.S. from China and Japan in the 1800s as an ornamental hedge and screening plant. Native to Europe and Asia, E. angustifolia has been used both as an ornamental shrub and for windbreaks in the central and western U.S. It isn’t clear when it was introduced, but we know it’s at least been here since the early 1900s.

Where Are They Found?

Geographic Region:  In Virginia, thorny olive and autumn olive threaten all major regions (PDF): Coastal, Piedmont and Mountain. Autumn olive, however, is considered a higher risk invasive. So far, Russian olive has been problematic primarily in coastal areas (PDF). To see where they’ve been reported in the U.S., check out these distribution maps of E. umbellata, E. angustifolia, and E. pungens. All three Elaeagnus species should be reported to the Virginia Invasive Species Working Group.

Habitats: Elaeagnus is extremely successful in disturbed areas with poor soil because root nodules allow it to fix nitrogen. All three can easily handle drought, salt and other harsh conditions, which is why they are often planted along highways and former mining sites. Thorny olive is more shade tolerant than Russian and autumn olive, so it is more likely to invade under forest canopies.

What is the Impact of Elaeagnus on the Environment?

Elaeagnus outcompetes native vegetation by forming dense thickets and shading out plants below. If it begins climbing, it can even block sunlight and photosynthesis from occurring in larger shrubs and trees. Because Elaeagnus spreads both through root suckers and seed dispersal by birds, it rapidly displaces native vegetation.

What Options Exist for Controlling Elaeagnus?

Since they are close relatives, E. umbellata, E. angustifolia and E. pungens are easily mistaken as one another. All three olives should go, so don’t worry too much if you aren’t exactly sure which species of Elaeagnus you are dealing with.

Timing and Strategy: If you’re dealing with a large invasion, “save the best” by starting with the least heavily invaded areas and working your way from there. Regardless of how you choose to control Elaeagnus, be sure to remove fruits to prevent new seeds from germinating.

Mechanical: If the soil is moist, seedlings or sprouts should be pulled by hand (PDF). This ensures that all roots have been removed. Simply cutting, mowing or burning will not kill Elaeagnus, but removing aboveground vegetation can be useful in the short-term to allow sunlight access for understory plants. Wear thick, protective gloves to avoid being pricked by thorns!

Biocontrol: Goats can be an effective form of biological control for certain invasive plants. In fact, both goats and sheep actually enjoy eating Elaeagnus and can clear brush in one season. They don’t mind the thorns! It is important to have them continue to graze in successive years since it will resprout.

Chemical: Penn State Extension provides a detailed explanation and management calendar for chemically treating autumn olive and Russian olive, so it’s worth reading more from them if you feel that herbicides are necessary. Thorny olive treatment is similar, although as an evergreen, there is a longer window for foliar applications. Your local Virginia Cooperative Extension office is a great resource, too! As always, remember to follow all labels when applying herbicides. 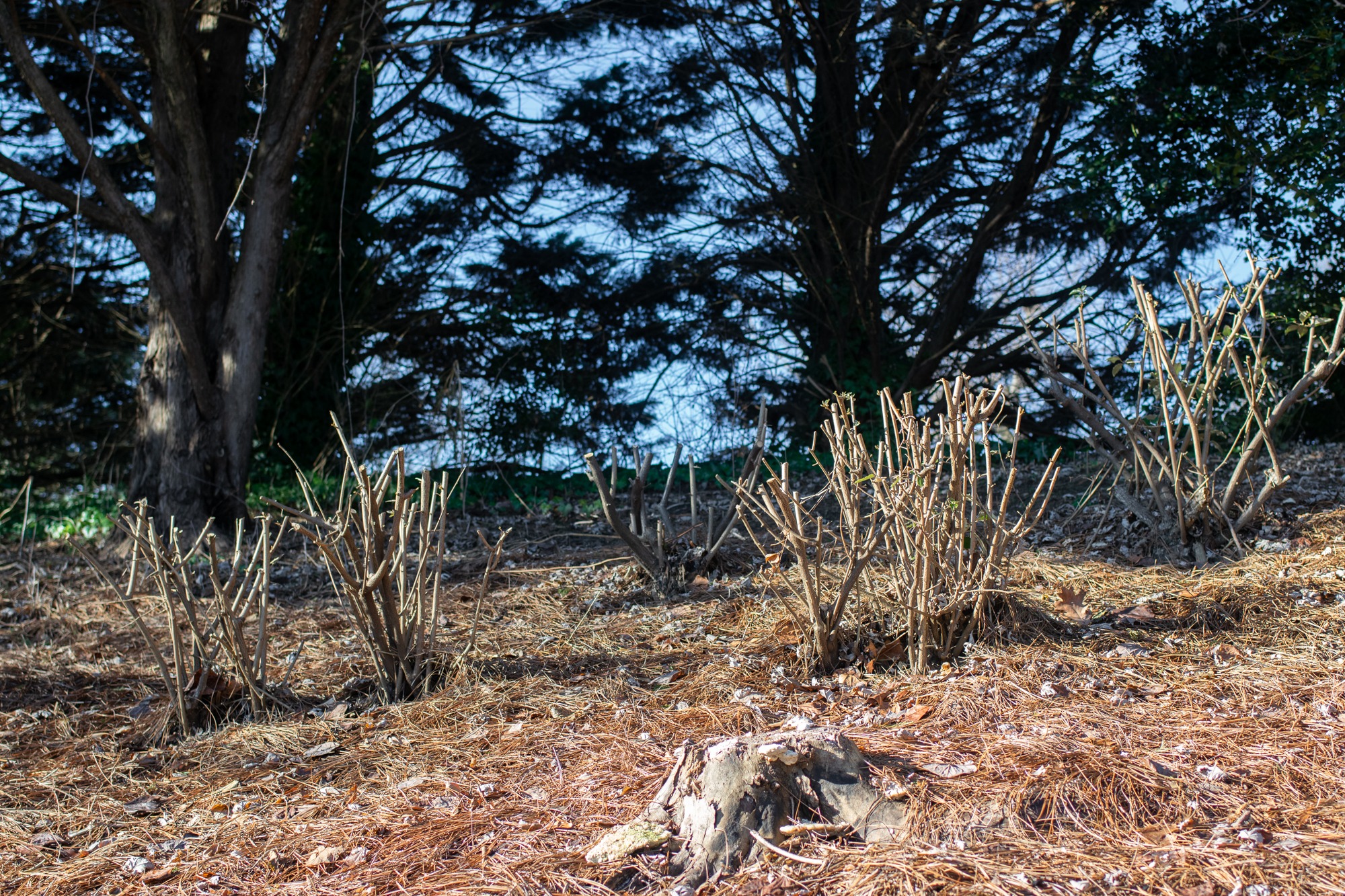 This is what E. pungens looks like after being cut back. While this prevents fruiting in the short-term, vigorous regrowth is likely to occur. Image by Nicole Plummer. 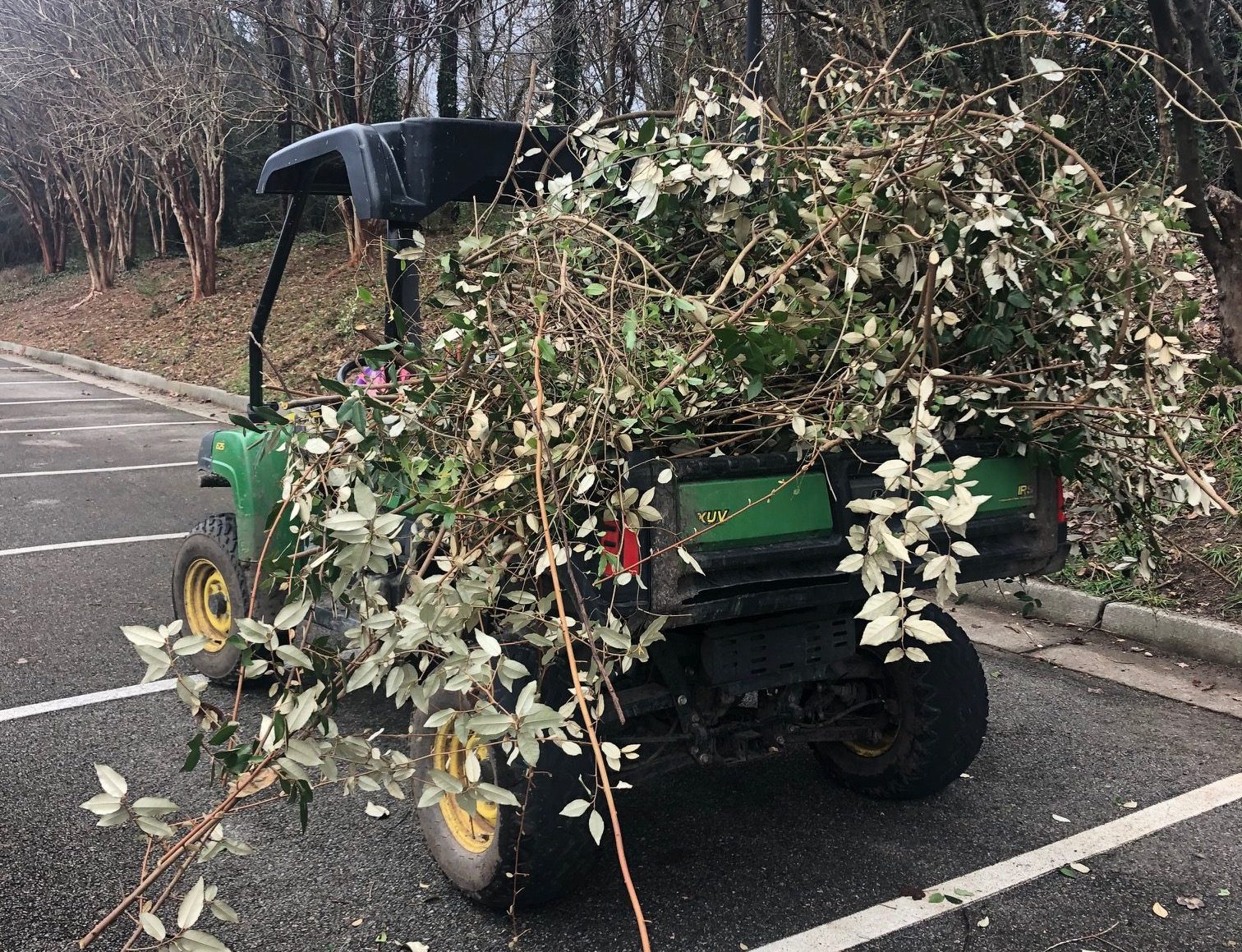 E. pungens foliage is ready to be hauled off after mechanical removal. Image by Sarah Coffey.

For more information, visit the Virginia Department of Conservation and Recreation and the USDA’s pages on autumn olive, Russian olive, and thorny olive.