Have you ever looked along a highway and observed all the trees covered in vegetation from trunk to branches? It was most likely English ivy (Hedera helix), the final of our 12 Dirty Dozen plants.  H. helix certainly isn’t last in terms of its invasiveness in our region and at the Garden. We hope you can learn from our mistake by choosing not to plant this ornamental vine. 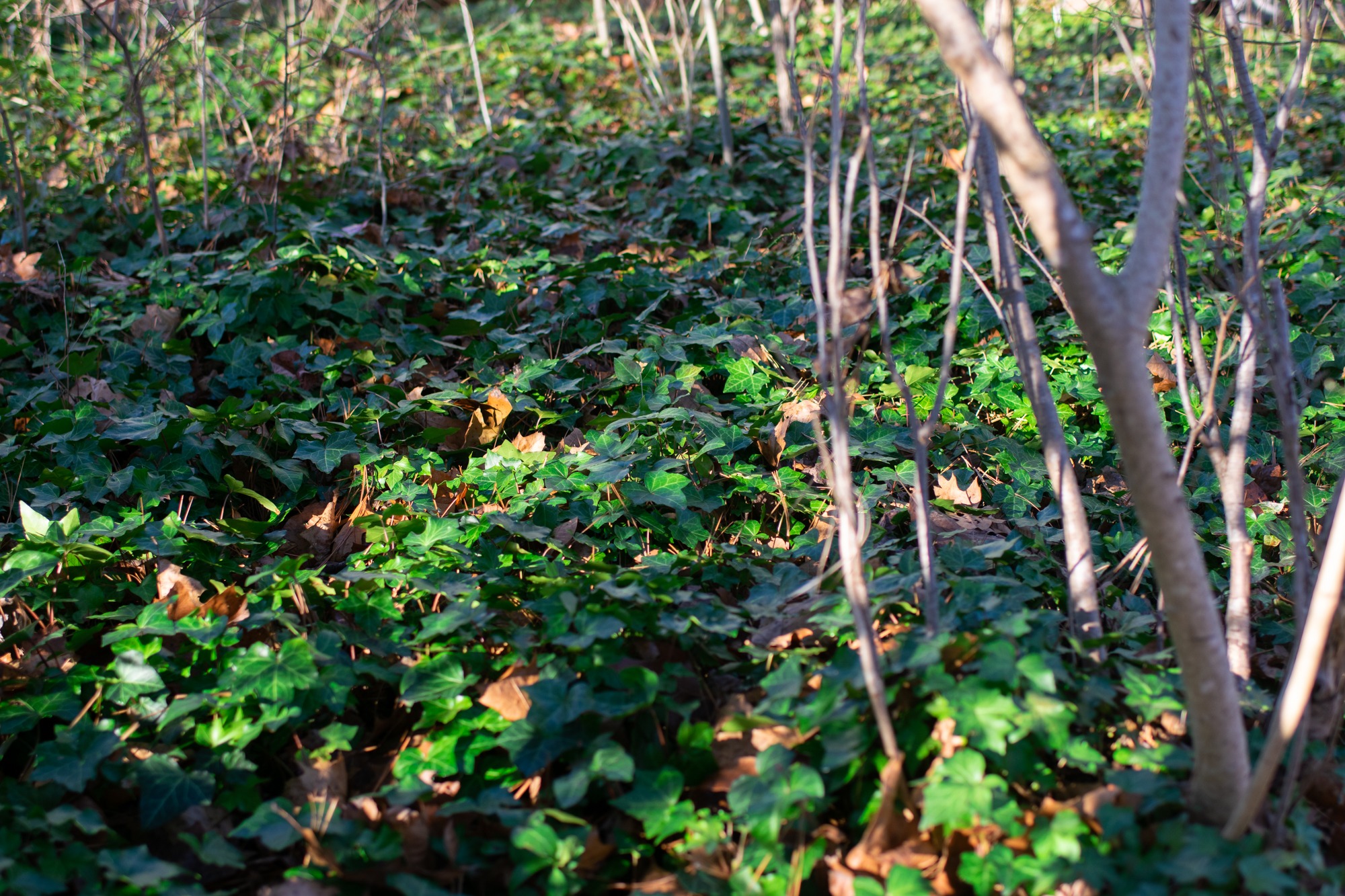 Pictured is H. helix leaving little remove for other vegetation on the forest floor. Image by Nicole Plummer.

English ivy is an evergreen, perennial woody vine in the ginseng (Araliaceae) family. Its dark green, waxy leaves are alternate and have between 3 and 5 lobes. H. helix has tiny greenish-white flowers that bloom in late summer or early fall and after the flowers come blue-black berries. It reproduces both vegetatively by runners and sexually by seeds, which are dispersed by birds. Mature vines can grow up to 100 feet tall! 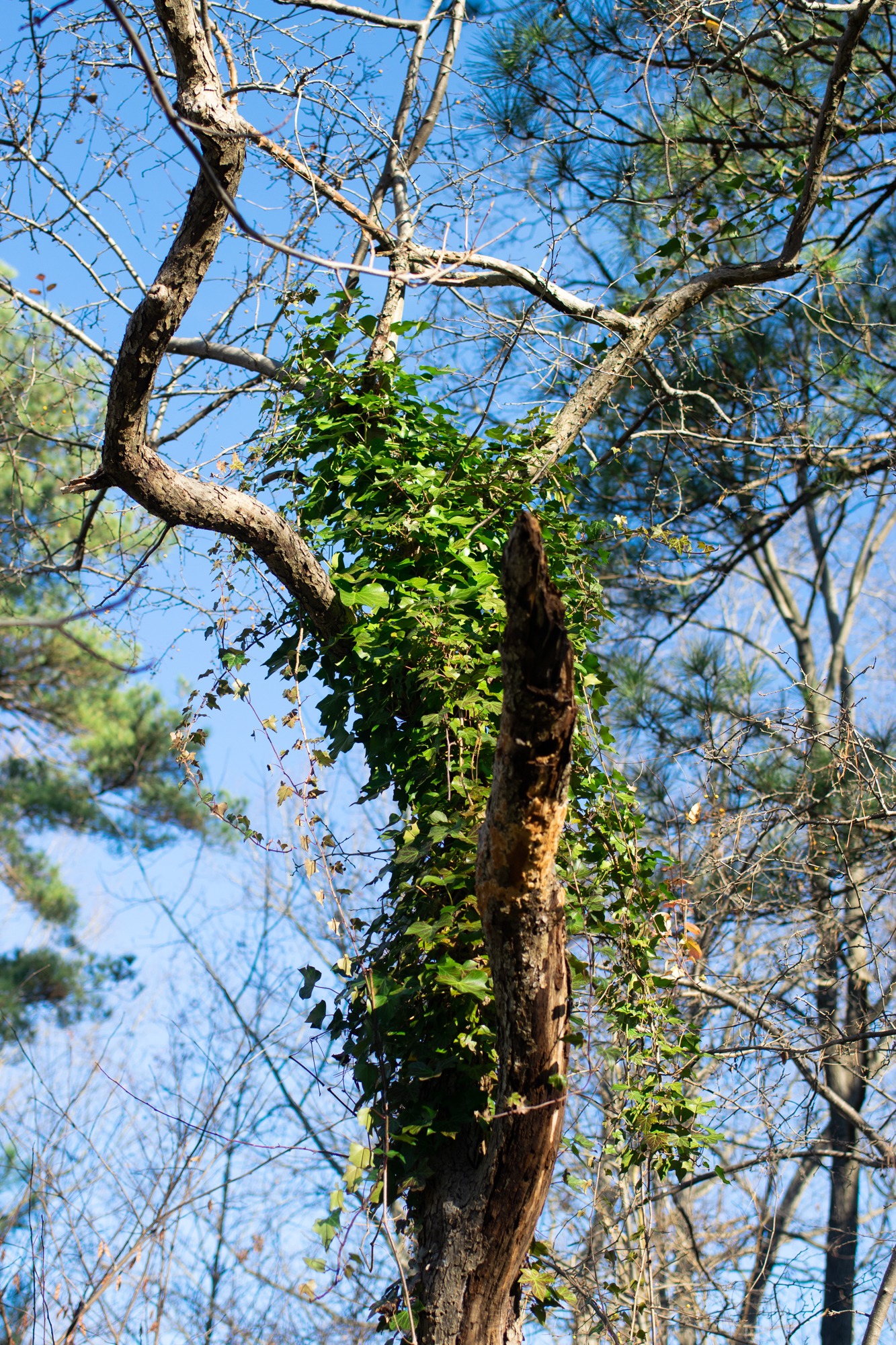 …but before you know it, the entire tree is girdled! Images by Nicole Plummer.

English ivy is native to Europe, Western Asia and Northern Africa. It was brought here by colonial settlers for cultivation as early as 1727. It has continued to be planted and marketed as a “low-maintenance” groundcover across the United States, which is ironic, considering how many resources go towards its removal.

Habitat: English ivy invades both open and forested areas, from the understory to the forest canopy. Disturbed areas (such as roadsides) are especially susceptible to invasion. It will even grow along building facades and fences, which can cause considerable damage and cost a lot of money to repair.

What is the Impact of English Ivy on the Environment?

English ivy’s most dangerous attribute is that it vines up and chokes trees. Not only does this prevent photosynthesis from happening by blocking foliage from sunlight, but it also damages tree bark by holding moisture against the trunk. Fungal rot ensues, leading to a slow and painful death for infested trees. Under the weight of the vines, they are also more vulnerable to fall over during extreme weather events. As if that isn’t enough, H. helix is a reservoir for bacterial leaf scorch (Xylella fastidiosa), a pathogen that usually afflicts maples, oaks and elms. 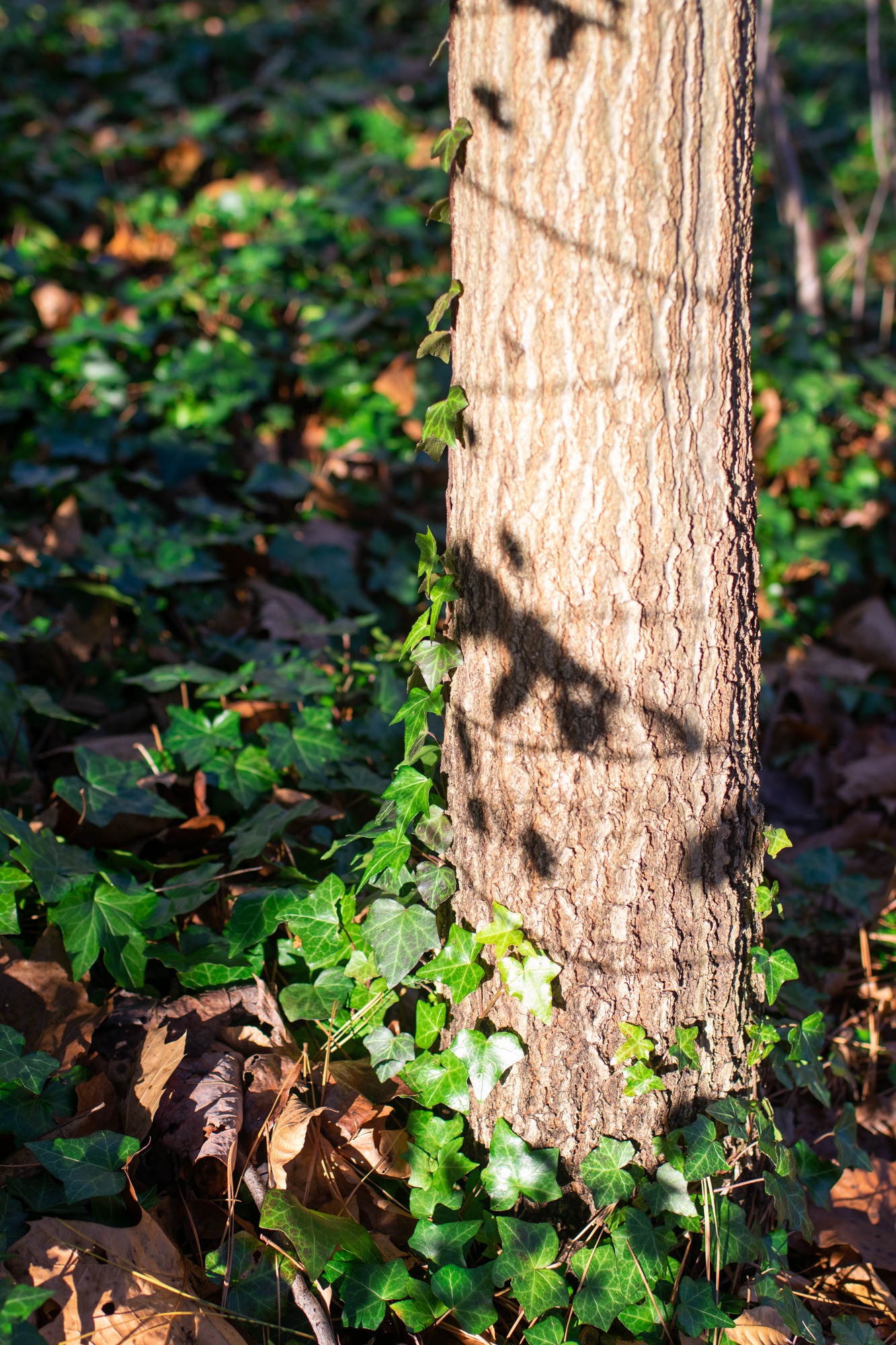 H. helix starts out by climbing up the trunk.

All sightings of English ivy should be reported to the Virginia Invasive Species Working Group. English ivy has a unique appearance, though there may be some slight variations according to the cultivar. It usually is not mistaken for other plants, although in the winter, it can be hard to tell the difference between large, hairy-looking H. helix vines and those of poison ivy (Toxicodendron radicans). Remember, English ivy is evergreen and poison ivy is deciduous, so if you see hairy vines without leaves, don’t touch! It’s probably poison ivy.

Prevention: Don’t plant English ivy. Better yet, if you see it being sold at a local nursery, please explain to them that you’d rather that they sell native alternatives to English ivy (see our suggestions below). If you already have English ivy, at the very least cut the flowers off (PDF) to prevent it from spreading by seed.

Timing and strategy: As we have already shared, the biggest problem with English ivy is that it causes the most harm to trees. So, removing English ivy from the base of trees and on the bark (if possible to do without damaging it) is key. Cut large vines (PDF) climbing the trees then dig up the roots with a shovel. You can pull down the higher vines a few weeks later when they have dried out and are easier to remove.  A weeding knife or even a flathead screwdriver helps to peel ivy off the bark. Once you have tackled the trees, work your way from the least infested areas to the most infested areas. Any seedlings should be pulled as soon as possible — they are easy to remove when young.

Mechanical: When H. helix is growing on the ground, it can be pulled by hand. Be sure to remove all roots or else it may resprout. This is easiest when the soil is moist. Pro tip: take a hard rake to remove vines more quickly, and then go back to remove the remaining root fragments. If you’re time-strapped, mowing or line trimming may be a short-term solution for preventing H. helix from vining up trees or flowering but removing roots is the only way to eradicate this plant. Do not compost English ivy! It should be bagged and send to the landfill or else it can resprout from root fragments.

Biocontrol: Goats and sheep can be a great way to keep invasive plants in check. According to Kristi Orcutt, owner of RVA Goats, small amounts of English ivy can be grazed by goats. If there are larger infestations, it is safer for the goats if the ivy is supplemented with other plant cuttings or hay. While this will prevent English ivy from climbing up trees and reduce its environmental impact, it won’t completely remove it from an area.

Chemical: Because H. helix covers extensive areas and climbs up trees, it can be difficult to apply herbicides without affecting nearby vegetation, so chemical treatment should be a last resort. If you think herbicides are necessary (see our Chinese privet post for a better understanding of these circumstances), and you can check out Clemson Cooperative Extension’s page on English ivy control. Pay close attention to the recommended time of treatment (spring), which is when new ivy leaves grow and do not yet have a protective waxy cuticle. Please following all labels. For further guidance, ask your local Virginia Cooperative Extension office. 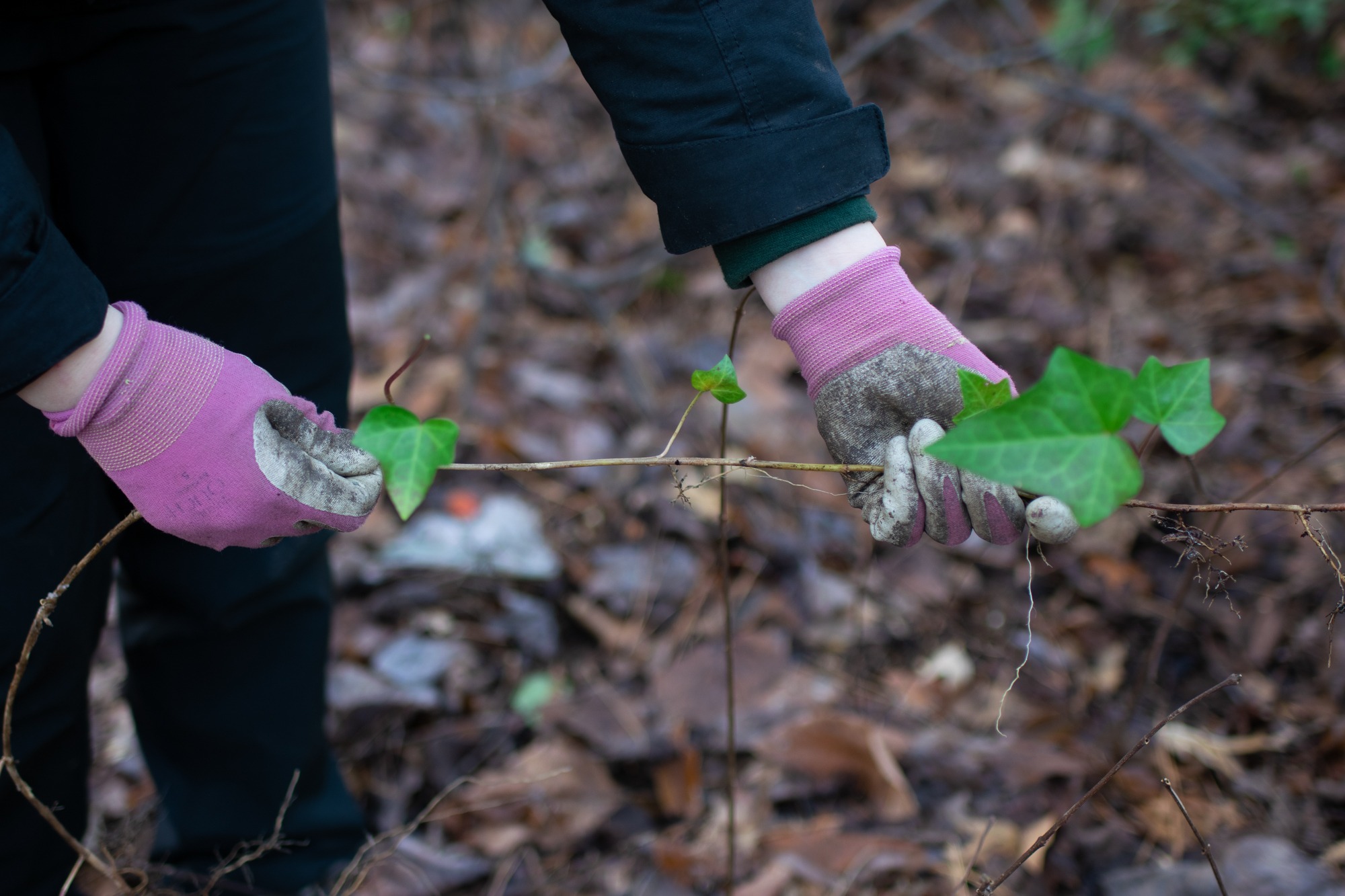 When hand pulling English ivy, be sure to remove all root fragments. Image by Nicole Plummer.