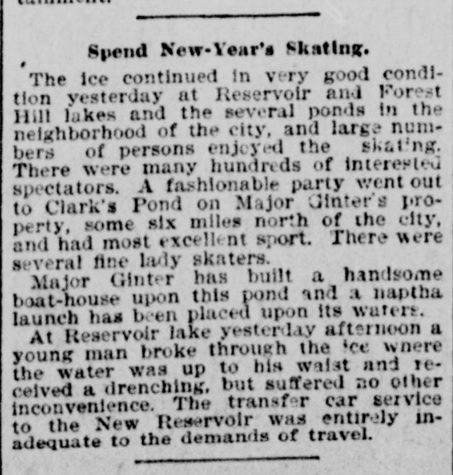 From the January 2, 1895, Richmond Dispatch newspaper.

On January 2, 1895, the Richmond Dispatch reported that Richmond citizens enjoyed ice skating on the first day of 1895 and were fortunate to have three locations for skating: Forest Hill lake, the city reservoir, and right here in Lakeside at Clarke’s Pond. The pond is now known as Lakeside Lake and belongs to Jefferson Lakeside Country Club it is located behind Bloemendaal House adjacent to Lewis Ginter Botanical Garden. Sadly, we don’t have any images of people enjoying the ice skating.

The story goes that Lewis Ginter built the dam with a walkway on top to connect his two properties.  Later that year, in November,  Major Ginter opened the Lakeside Wheel Club, a popular cycling destination on the south side of the lake, and in 1896, he opened Lakeside Park on the north side.  The park offered many amusements to lure city folks to the countryside.  The walkway on top of the dam allowed visitors to arrive by electric streetcar and promenade over the dam to enjoy dancing, dining, bowling and wildlife exhibits offered by the park.

A naphtha launch was a recreational boat powered by a small engine fueled by naphtha, a flammable oil containing hydrocarbons. Naphtha launches were an alternative to larger steam powered boats. 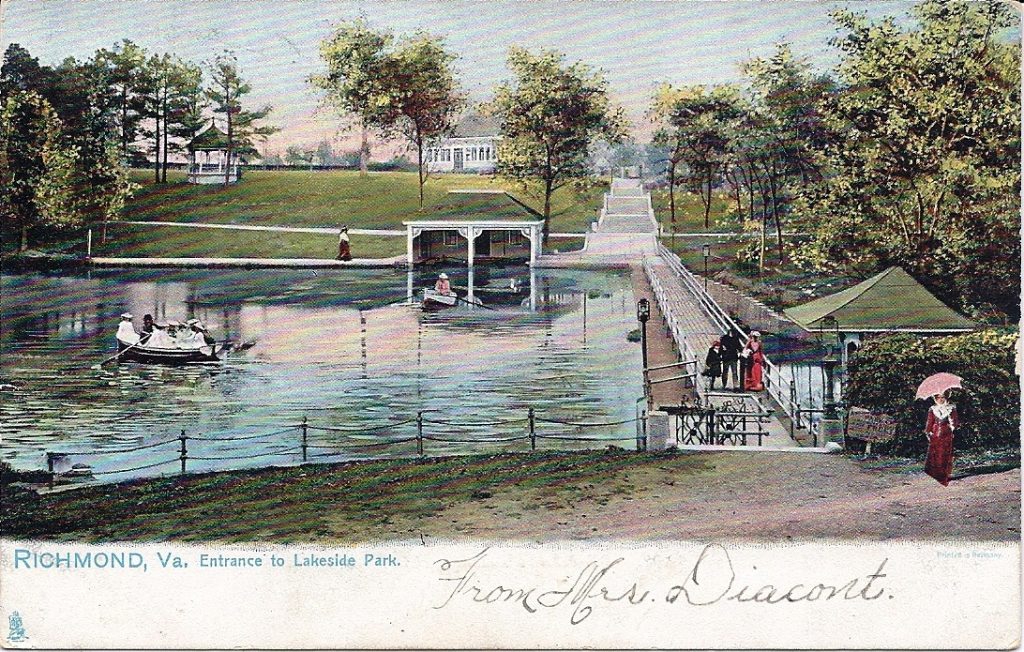 In the summer scene above, visitors enjoyed rowboats and strolling on the dam. This is an undated postcard from the Garden’s Archives. Sadly, we don’t have any images of ice skaters.

Even today you can view Lakeside Lake and the dam (currently being rebuilt by Jefferson Lakeside Country Club) although it looks a bit different than it did in the post card above.  To see it, walk through the Garden to Bloemendaal House and then to the Wildside Walk trail behind the house.  Bloemendaal House is a converted and renovated version of the Lakeside Wheel Club. You can see an image of the one-story Wheel Club on our website’s History page.
For more images of Lakeside Park in use, you might enjoy the book Henrico County, by Louis H. Manarin, in the series Images of America. Arcadia Publishing, Charleston, S.C., 2006. This volume is available in the Garden’s Lora Robins Library.