This week, we are highlighting invasive Nandina domestica, commonly known as nandina, heavenly bamboo and sacred bamboo. Despite the name, this member of the Dirty Dozen is neither a true bamboo nor heavenly. Like mulberry weed, nandina has not yet been recognized on the Virginia Invasive Plant Species List, though it is a well-known invasive in other parts of the United States. Unfortunately, this poisonous, invasive shrub is frequently found in garden centers and nurseries and in home landscapes. We encourage you to resist the temptation and plant native instead. Learn more by registering for our Grow Native Series! 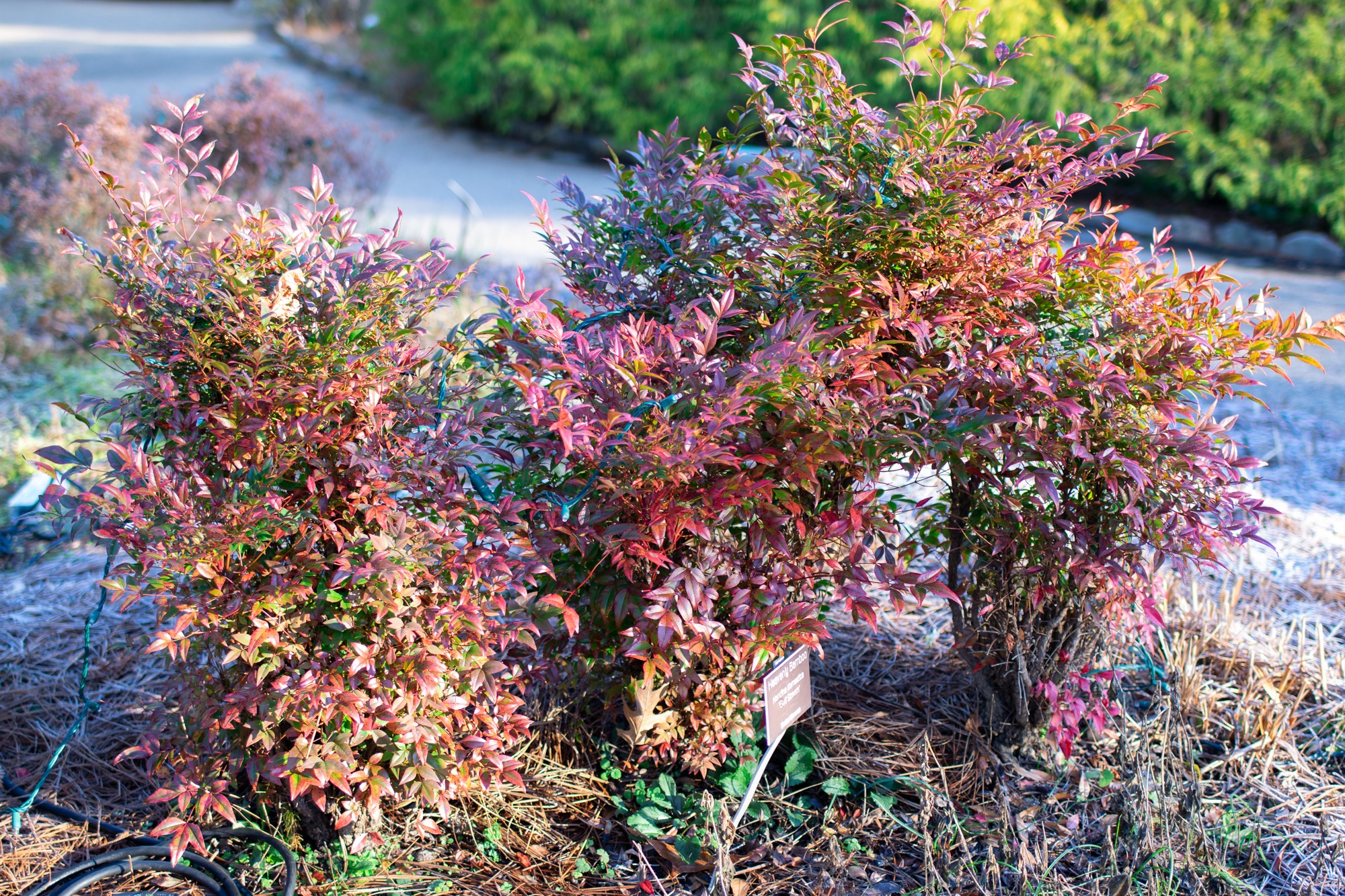 Nandina domestica may be beautiful, but don’t be deceived by its kaleidoscopic display. It may soon be taking over your yard, parks and conservation areas. Image by Nicole Plummer.

Nandina is an evergreen shrub in the barberry (Berberidaceae) family (PDF) that usually grows  4 to 8 feet tall and 2 to 4 feet wide. Its pinnately compound leaves look similar to those of bamboo, hence its common name “sacred bamboo.” Leaflets are between 1 and 2 inches long and turn red at lower temperatures. Nandina blooms in late spring and develops clusters of red, two-seeded berries in late fall and winter. Because it is rhizomatous, it can reproduce vegetatively from its roots, in addition to reproducing sexually by seed. The University of Florida-IFAS Center for Aquatic and Invasive Plants has an informative video with more information. 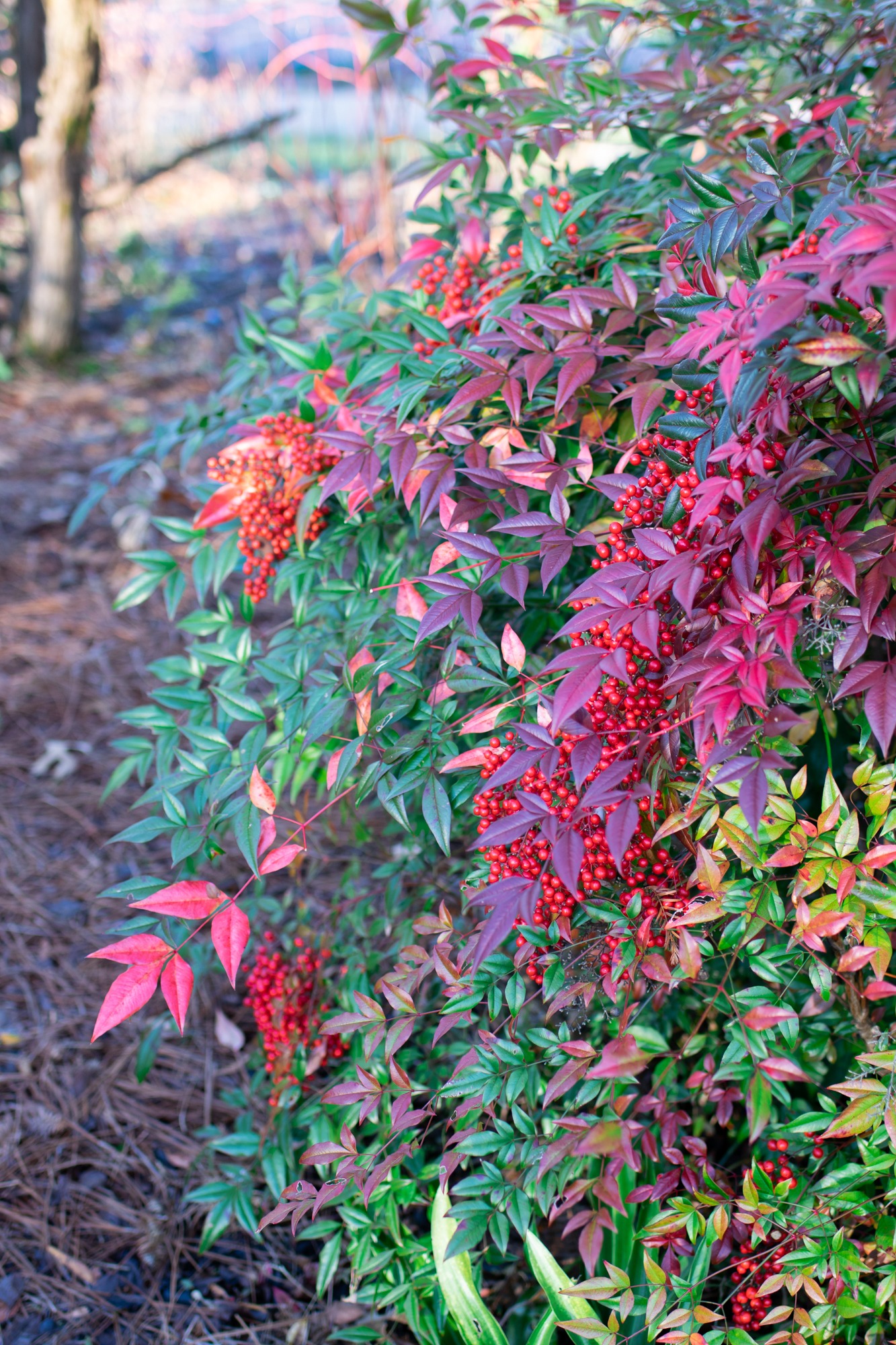 How did it Get Here?

N. domestica has a native range of Japan, China and India. It was intentionally introduced to North America as an ornamental in 1804 for its year-round interest and beauty. You’re probably also wondering how it got here, as in Lewis Ginter Botanical Garden. For a better understanding of why we once planted a species now known to be invasive, we invite you to read this short article.

Geographic region: Nandina has primarily invaded the southeastern United States, though it is also a nuisance in other places (including Virginia). This map shows where nandina has been reported.

Habitat: As a shade-tolerant plant, N. domestica flourishes in forests and forest edges. It also tolerates full sun and a range of soil conditions.

What is the Impact of Nandina on the Environment?

Nandina has escaped cultivation and invaded southeastern forests. Aside from forming dense thickets and displacing native plant communities, its berries are poisonous to people, pets and wildlife. If there aren’t other foraging options, birds (who also inadvertently spread N. domestica seeds) will gorge on berries. Sadly, research shows that multiple bird species, though most notably cedar waxwings, have died after eating too many N. domestica berries.

What Options Exist for Controlling Nandina?

Prevention: We strongly recommend that you don’t plant nandina, but if you must, please choose sterile cultivars like ‘Firepower‘ and ‘Blush Pink‘. If you choose to keep your Nandina, please remove and bag the berries and dispose of them in the trash (not the compost) before they spread or poison local birds.

Mechanical: Smaller shrubs can be hand-pulled, but larger individuals will require a shovel to dig up. We do not recommend mowing or cutting because it can resprout from roots. Be sure to remove the roots entirely if you choose mechanical methods.

Chemical: Because mechanical removal of nandina is often difficult and ineffective in the long-term, you may feel that you need to use an herbicide. Check out our blog post on Chinese privet for a better understanding of when chemical control is appropriate. For nandina, tripoclyr (1% solution with 0.25% surfactant) and foliar applications of glyphosate have been known to work. For larger plants, cut the stems and then apply the herbicide so that it spreads throughout the plant. Remember to follow all labels and consult with your local Virginia Cooperative Extension office for assistance if needed.

Timing: No matter which form of removal you choose, it’s best to do it before berries form. Follow-up treatments may be needed to deplete the soil seed bank. 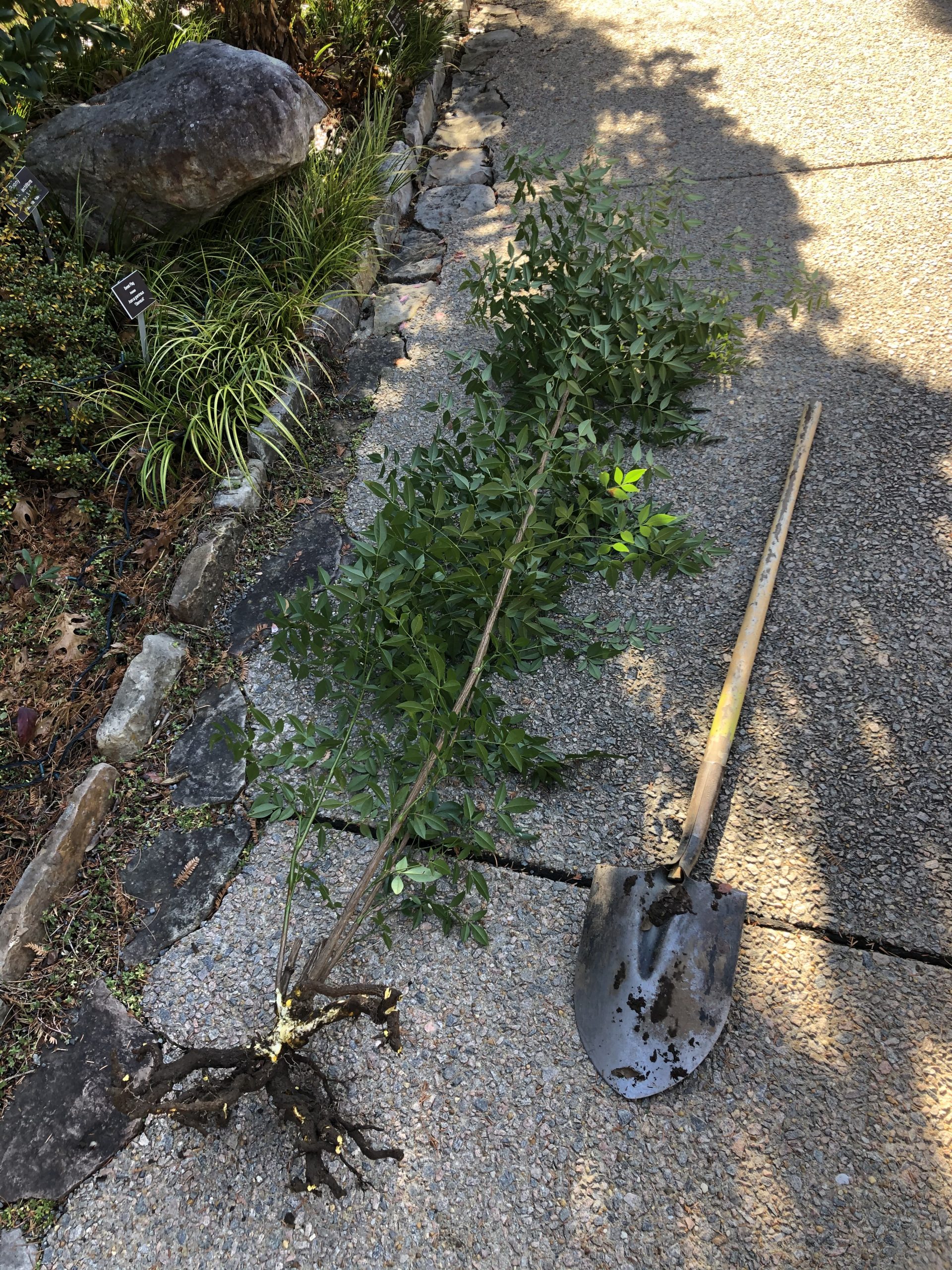 What are native substitutes?

If you are looking for other plants that provide year-round interest like nandina, you might consider planting different cultivars of natives winterberry holly (Ilex verticillata). They also have bright berries in winter, but they are not toxic to wildlife. In fact, birds love them! Another great alternative is the evergreen shrub, yaupon holly (Ilex vomitoria), which can also be used to make tea!

Learn why to grow native plants in your home garden! This 6-week online series is only $10.